The Turkmen of Iraq: Between a rock and a hard place

Twelve years after the fall of Saddam, Iraqi Turkmen are still fighting for their community's rights and survival 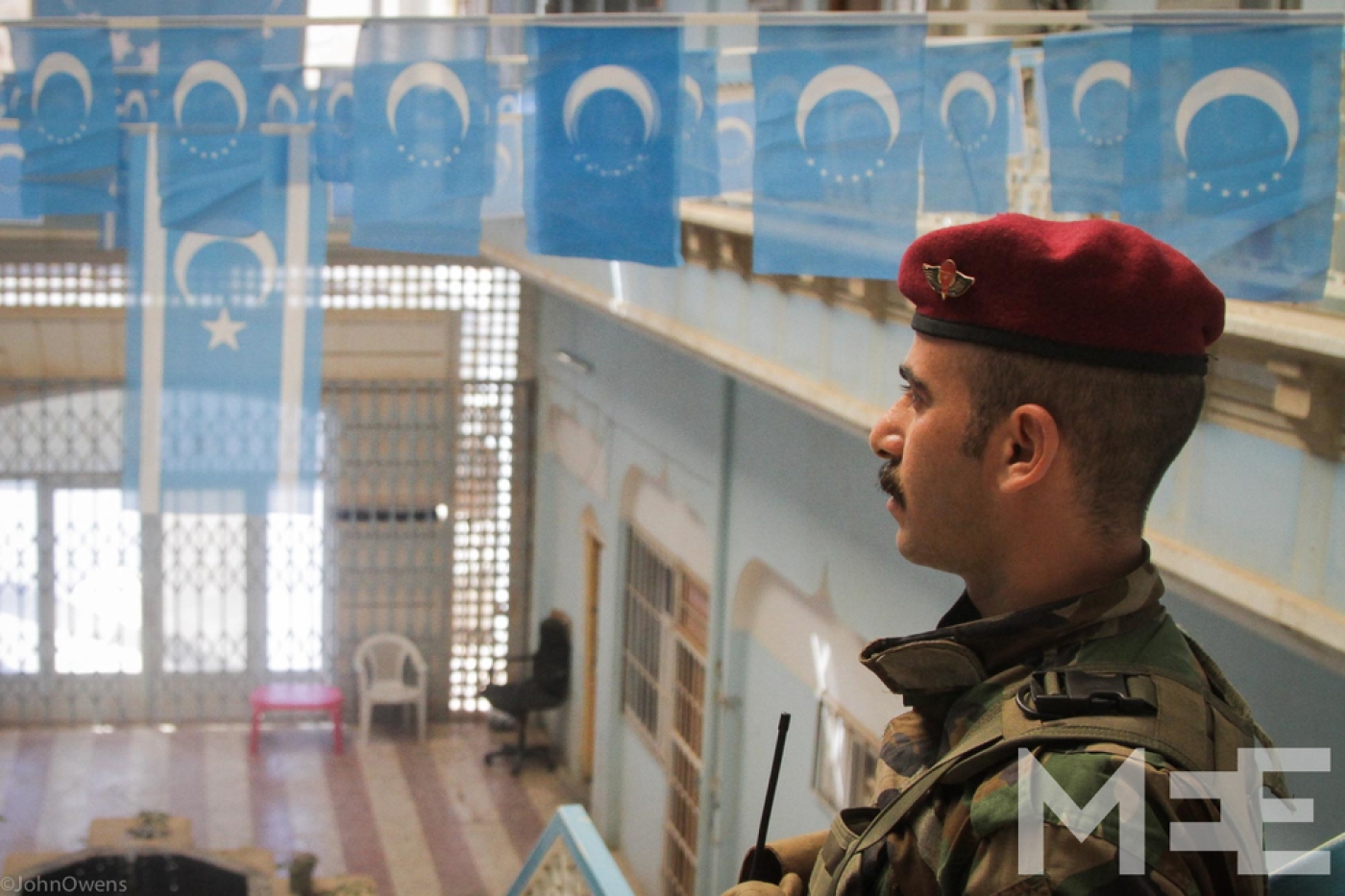 KIRKUK, Iraq - In 1991 as rebellion ignited across Iraq, Turkmen left their homes and took up arms, ready to wage war against Saddam Hussein's crack troops and resist his genocidal campaign against Iraq's minorities.

Twelve years after the fall of Saddam, Iraqi Turkmen are still fighting for their community's rights and survival.

Considered descendants of the Ottoman administrators that once ruled the Arab world, with their own language and proud history, Turkmen have long struggled to find their own place within modern Iraq.

Like so many other minority groups, Turkmen fell victim to the Islamic State (IS) group's rapid advance across Syria and Iraq last summer. Currently, the frontlines between Kurdish Peshmerga forces and IS straddle ancestral Turkmen lands, which stretch from Syria to Iran. While Kirkuk escaped IS capture, Turkmen-majority towns like Tal Afar remain in IS's hands. The Turkmen community can do little but pray for the welfare of their brothers and sisters in those towns.

But away from the frontlines, Turkmen still face another battle, one against the Kurds they fought and died with under Saddam.

Earlier this month, the Turkmen Rescue Supreme Commission, a Turkmen activist group, released a statement condemning Kirkuk's Kurdish governor for discriminatory policies allegedly aimed at uprooting Turkmen from the city. While they have been in Iraq for more than a millennium, their community feels more vulnerable than ever.

"To win their ideas, to get the results that they have planned, I think that the Kurds are ready to attack Turkmen or Arabs or anyone," Sami Kolsuz, a senior figure in the Turkmen Hak Party, told Middle East Eye.

"The hard times we faced under Saddam, the discrimination - you couldn't buy a house because you were Turkmen, you couldn't get a job - all this we suffered together [with the Kurds]," Kolsuz said.

Kolsuz feels that Turkmen have faced even greater discrimination under the Kurds than in Saddam's campaign to "Arabise" Kirkuk.

And now, with the instability of the past year, grievances have been brought to the fore.

Since the national army fled in the face of IS last summer, the city has been firmly under Peshmerga control, sparking anger among many Turkmen.

"The Kurds are from the same country as us but it doesn't mean that when they come to protect this province, Kirkuk, they get to take it over," said Kasim Kazanzi, a Kirkuk city council member from the Iraqi Turkmen Front (ITF). "We [sacrificed] 50 or 60 martyrs in Ramadi - it doesn't mean we get to keep that city."

Peshmerga control over the city is total, with even the government-backed Popular Mobilisation Units (PMU) ostensibly banned from entering the city limits.

But Turkmen PMU Major Abdul Hussein downplayed tensions between the two militias. "We have good relations with the Peshmerga, so we're not saying we're not happy," he said.

"We're happy but we don't need them," he added.

Hussein seemed relaxed about the future of his city. "Of course if all the problems [with IS] will be resolved, all the people will go back [to their pre-2014 territories] and see what the politicians decide. They'll be in charge."

Renad Mansour, a researcher on Iraq at the Carnegie Middle East Centre, believes that a weak Baghdad plays in the favour of Erbil's geopolitical interests.

"The general KRG [Kurdish Regional Government] policy is to act as a protector of minorities. This is the discourse that they're looking to express but obviously to call this completely altruistic would be neglecting the geopolitical element," Mansour said.

"To many Kurdish leaders, the issue [of Kirkuk's governance] isn't even up for negotiation anymore," he continued. "As early as June last year you had [Iraqi Kurdistan President] Massoud Barzani saying, 'Kirkuk is ours.' This all relates back to Jabal Talabani; he once called Kirkuk the 'Jerusalem of the Kurds'."

No annexation without representation

But Turkmen grievances aren't reserved just for Erbil. Since the 2003 US occupation of Iraq, successive Iraqi governments have failed to address the issue of minority political representation.

Even the Turkmen's lack of political experience - a point of particular consternation - has roots in historical discrimination. "Saddam's regime didn't allow us to set up political parties, so we have no experience compared to the Kurds in this field," Kolsuz said.

Currently, Turkmen politicians hold just over 20 percent of seats on Kirkuk's city council, while Turkmen leaders say they make up nearly a third of the city.

"We don't want sectarianism inside military bases, inside the police, inside any government building - but that happens," he said. "So we want everything balanced [ethnically], everything justified, so we can work together and live together in this country."

Tired of being ignored by their own government and the international community, Turkmen are turning to the final resort: arms. While revolt is far from their minds, many Turkmen hope that military force of their own will bring the respect, recognition and protection the community demands.

"Until now we haven't had a military force. We do have people in the military but we don't have the percentage we need," Kazanzi said. "Our villages and our land have been taken by IS and we need to have these kind of things to protect our lands, to protect out properties, our families."

All the Turkmen leaders that MEE spoke with were adamant that a Turkmen military force was essential for the community's quest for rights and recognition. Several looked for official support from Baghdad.

"We are not going to develop any extra-legal militia and we are trying to get the acceptance from the government to establish one force belonging to the interior ministry or for the defence ministry," Kolsuz said.

"We believe that Iraq is a union - one Iraq, from Zaho to Faw," he said. "If any area in Iraq needs our protection, we will be there."

Turkmen were quick to sign up to serve in the majority-Shia PMU in defence of their land, and dozens have been killed across the country. PMU commander Hussein said he hoped that the community's sacrifice would lead to Baghdad granting some of their longstanding demands. Their dedication to Iraq's government is resolute.

"We still have many Turkmen fighting in different provinces and if they want us to go fight in Mosul, yes, we can go to fight there," he said. "Wherever they want us we will go."

The various Turkmen parties are divided on many issues. The ethnic politics of the ITF and the more isolationist Hak Party stand separate to the more overtly religious groupings of the Islamic Union of Iraqi Turkoman, while the Kurdish-backed Turkmen National Association provides a powerful foil to them all. The result is a confused and fractured Turkmen political voice.

Some pro-Kurdish Turkmen have called for concessions in exchange for Kurdish rule but Iraq expert Mansour admits that the question of supporting Kurdish expansionism is contentious among Turkmen. "Some [Turkmen] want to perhaps have a Turkmen vice president of the KRG," he said.

"But with any one of these officials, the problem is [the possibility of] them being picked by the Kurds, [as] puppets."

While Turkey has long supported the Turkmen, the recent geopolitical shift of President Recep Tayyip Erdogan's Ankara administration towards favouring Massoud Barzani's Kurdistan Democratic Party (KDP) has had grave ramifications for the Turkmen of Kirkuk. Turkey is Kurdistan's primary market for oil export and trade. Past animosity has been sidelined for economic gain.

"For Turkey, the economic politics come first, Sunni [politics] come second and we are third," Kolsuz said. "They are not really supporting us. Focused support towards us is not happening."

Turkish special forces have been involved in training Turkmen soldiers in the past, but since the rise of IS, the Turkmen cause has paled into insignificance within Turkey's regional strategy. Without powerful backers, the Turkmen of Kirkuk have few allies.

Years since he hung up his rifle, Kolsuz still carries a pistol tucked into a linen holster in his waistband. "Iraq is a dangerous place now," he said. But as he talked of the future, his expression grew darker, a pained look on his face.

"We don't know how the future will be. It will be very bad for us and the Turkmen community will be nothing. It will turn to dust."