People have been burning money, defriending people on social media and shunning neighbours to avoid being branded Gulenists 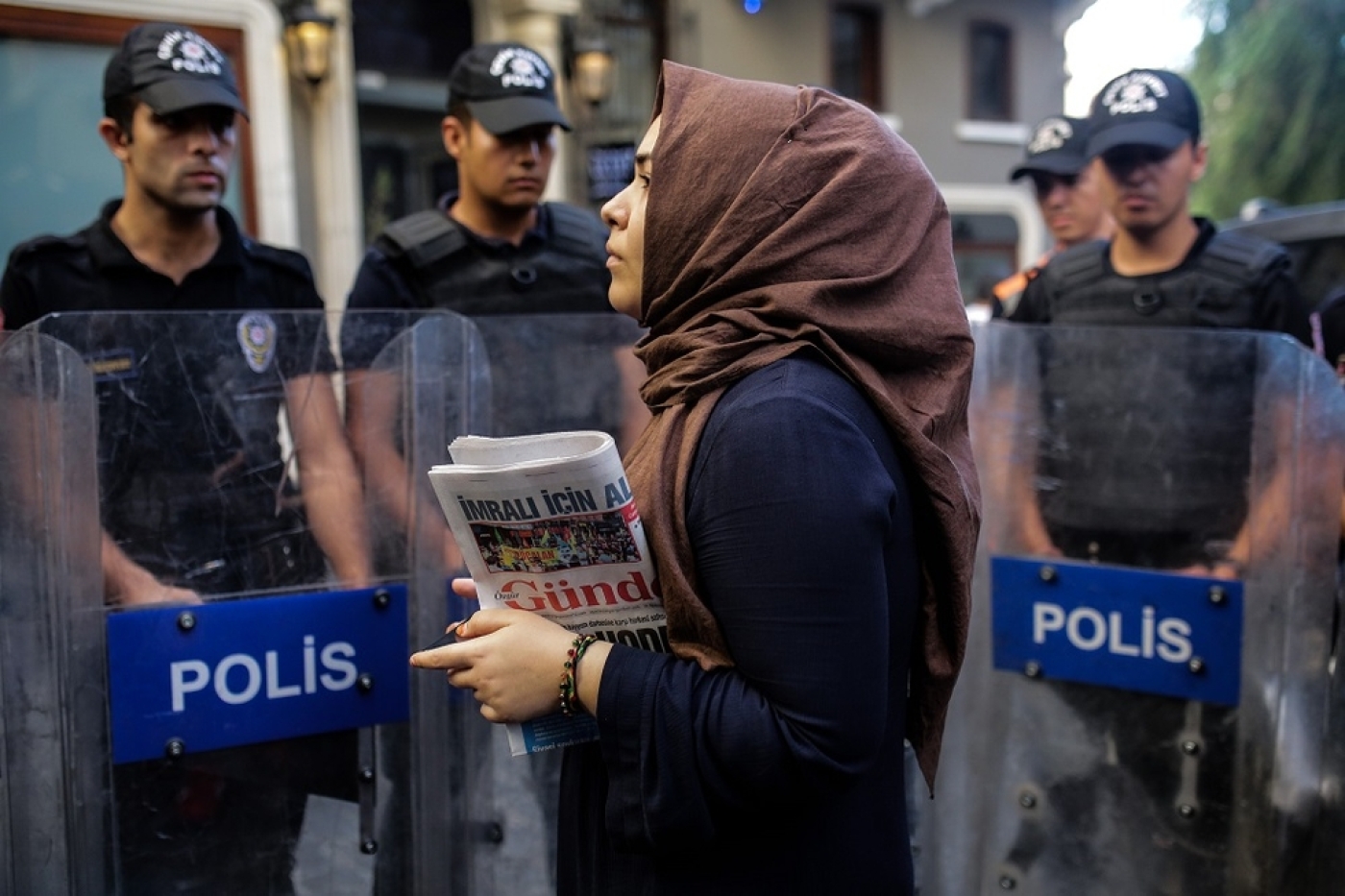 ISTANBUL, Turkey –The sheer scale of Turkey’s post-coup crackdown, and the secretive nature of the organisation whose members are being hunted down, have placed Turkish society at risk of developing severe psychological trauma, warned political and social observers.

Mustafa and Selma are a typical apolitical Turkish middle-class married couple whose main focus in life is their three-year-old son. Like millions of Turks, they sat transfixed in front of their television screens on the night of 15 July as a military coup was unfolding and say they were immensely relieved the following morning when the attempt was thwarted. The relief, however, has proved short-lived. More than a month since the coup, they say they feel an overwhelming sense of panic and paranoia as officials have embarked on a crackdown. Like many other ordinary residents, they say they are too scared to give their real names to journalists, in case of reprisal.

“Our initial relief that a military junta didn’t take over the reins of power has been replaced by another fear. We can’t be sure of the direction our country is headed toward and what our future will look like,” said Mustafa, who works at a public relations firm.

The crackdown is directed at followers of Fethullah Gulen, a Turkish Muslim preacher living in the US, whom Ankara accuses of masterminding the coup attempt. Turkey says Gulen has been trying to infiltrate state institutions for decades in order to topple the government and change the constitutional system.

Since the crackdown began, over 80,000 people are estimated to have been arrested, dismissed or suspended from their jobs. These include soldiers, civil servants, academics, governors, prosecutors, judges, businessmen, diplomats, prison guards, football officials and even forestry officials. Many have had their assets frozen or confiscated shortly after their arrest or dismissal, although authorities promise that all those found innocent will eventually be allowed to return to work and clear their names.

More than 600 educational institutions, including schools and universities, have also been shut down.

Parents and students have been left fearing the consequences and wondering if enrolment in such schools will have legal but also educational implications.

Mahmut, 23, who this June graduated from Fatih University in Istanbul - one of those shut down - told Middle East Eye he is unsure if he will ever be able to get his actual degree now. He too would not give his real name in case it sparked further problems with the government.

“We were supposed to be given our degrees at a ceremony later this summer and now the university is shut down. I don’t even know who to ask. And what’s more I am afraid to ask,” he said.

“I don’t even carry my university ID with me anymore out of fear I will be accused of being part of the Gulen movement.”

The Gulen movement received strong backing from Turkish President Recep Tayyip Erdogan and his Justice and Development Party (AKP) until late 2013 when alleged Gulen loyalists in the police and judiciary brought major corruption charges against Erdogan and his close circle. They have become fierce foes ever since. AKP officials, including Erdogan, now say they were deceived by Gulen and his movement.

The government has been eager to state that the crackdown is totally legal and is not motivated by revenge. The three-month state of emergency was declared a week after the coup attempt helped to legalise many of the measures used by police and prosecutors.

It grants expanded powers to the government when it comes to detention periods, legal representation, as well as obtaining search and arrest warrants. It also allows the government to issue decrees that in effect create laws without parliamentary approval.

Complicating matters further is the methods employed to identify potential Gulen followers with critics saying that in many cases the links between those arrested for alleged links to Gulen and his Hizmet (service) movement are ambiguous at best.

A key method used to identify alleged Gulenists, according to officials, was to locate users of an obscure but amateurish messaging system called Bylock. Officials said 150,000 people are suspected of using this messaging app and are being tracked down.

Police also claim that one way of identifying Gulenists, as his followers are called, is to check if people possess $1 bills with specific serial numbers, which can be used to recognise each other.

However, the gifting of dollar bills, is also a widespread cultural tradition for weddings where the bride and groom are showered with money. Newlyweds across the country are now in a panic that they could be accused, especially as officials – including Erdogan – have increasingly called on people to report anything suspicious about colleagues and neighbours.

Mustafa and Selma were married six years ago. They kept some of the $1 dollar bills as a memento but have now decided to get rid of them, even though the extent of their political activity is limited to occasional dinner table conversations about the hopelessness of the situation in neighbouring war-torn Syria or the gradual erosion of secular values in Turkey.

“I had to destroy memories of one of the best days in my life,” Selma told MEE. “Where in the world would you have to be afraid even if you have nothing to do with the matter? But this is Turkey and I don’t think we are overreacting.”

In a further sign of the growing sensitivity of the matter, authorities have tried to ban anything that might even evoke memories of Gulen. On Monday, the Police Department decided to cancel all vehicle licence plates with the letters FG, the initials of the controversial cleric Turkey wants to see extradited to face trial.

Letters on licence plate numbers in Turkey are allocated in alphabetical order and plates with FG on them were issued to cars registered during 2014. The decision will apply to both public and private vehicles.

Mustafa says that some of his friends tell him and his wife that their fears are irrational and that they are overreacting, but he says that with things like licence plates becoming contested, and a small child at home, he doesn’t want to take any risks.

“I see these big companies and businesses in a mad rush to place full page ads in every single newspaper at highly inflated prices condemning those behind the coup and categorically backing the government,” he told MEE. “If these guys feel concerned then so should we.”

Mustafa says there has never been enough trust in politically polarised Turkey but that the current climate is making things much worse.

“A colleague or someone in my neighbourhood with a grudge could go to the authorities with a false claim and they will happily pursue it,” he said. “Just imagine this climate they are creating where armed police can raid our houses any minute for no good reason other than venomous gossip and put us through hell.”

Hundreds of families have already been affected by last month’s closure of more than 100 media institutions accused of being affiliated with the Gulen movement.

Muhammet, an editor who was among the hundreds fired last month, said innocent rank-and-file staff were being made to pay the heaviest price and also being ostracised socially.

“Friends and neighbours whom I considered close friends have stopped saying hello. Many have unfriended me on social media. Despite not doing anything, we became traitors overnight,” he told MEE while declining to use his real name. “I have stopped calling on friends because I don’t want to place them in a difficult position.”

They were all sacked without severance pay and had their bank savings confiscated, said Muhammet, adding that him and his former colleagues have become outcasts with no one willing to employ them due to fear of retribution.

“We believed in the charitable and Islamic nature of the [Gulen] movement. Many people did, including those in power now. Why are we the ones being made the scapegoats in this mess?” asked Muhammet.

He said he firmly believes those involved in the coup attempt should face justice but that it is the poor common workers who are unjustly being targeted because those with knowledge of the coup had the resources and forethought to leave the country as soon as the coup was thwarted.

“It is us poor ordinary people who have to suffer. If we start waving flags to show our patriotism we are called hypocrites. If we don’t we are called traitors,” said Muhammet. “There is absolutely no one out there willing to be the voice of innocent people.”

Nuray Mert, a political scientist who also writes commentary for the Turkish Cumhuriyet newspaper, believes the purge could potentially tear society apart because of the hypocrisy involved.

“We run the risk of creating an ethical vacuum in society. Overnight everyone – and I mean everyone from the highest government figures, military figures and everyone else – has become an arch-enemy of Gulen,” Mert told MEE. “Such behaviour is being encouraged from the very top and signals a deterioration of human dignity to say the least.”

Mert says society will suffer even in the short-term as a consequence of people being encouraged to inform on their colleagues and neighbours.

Some state-run institutions are also handing out forms to employees asking questions about their affiliations with Gulen, including if their children were enrolled in Gulen-linked schools. Local media has claimed that in one instance, a form even asked employees to provide any information they might have about colleagues associated with Gulen.

“Opportunists are making use of such a climate to eliminate rivals or people they hold grudges against by making false allegations. In no way can it be healthy for society when even the president calls on people to turn into informants,” she said.

Mert suggests that trend began even before the coup but has gotten worse since. Earlier this year in one of the more publicised cases, a man filed a lawsuit against his wife for insulting the president, because his wife would start screaming abuse at the television screen whenever Erdogan appeared. The woman later filed divorce proceedings. Last month, Erdogan dropped the charges.

Instances like this lead many to fear that they could be next.

Mustafa and Selma are already debating leaving Turkey and it is causing tension in the family.

“Mustafa says we should think of moving for our son’s future. But what will we do in another country without speaking any other language and without our families and culture,” said Selma. Turkey Coup
Turkey to free 38,000 from prison to make room for coup accused