The men were just two of hundreds of other young Palestinians who had taken to the streets in the overcrowded camp. Unlike most of the youth, Mansara and Aysh had traded rocks for guns, and they opened fire at Israeli forces before they were killed.

Israeli forces stormed the camp, intent on demolishing the home of Mohammed Abu Shahin, a Palestinian accused of killing an Israeli settler last June. Residents had expected the demolition but had no idea when it would happen.

Residents claim that more than 1,000 Israeli troops invaded their neighborhood on Monday morning, taking over rooftops and forcing residents out of their homes at around 2am local time (00:00 GMT). At that point they knew it was time for the demolition.

Mahmoud Yaekob, a friend of Mansara and Aysh, was sleeping when he got a call from a cousin alerting him to the soldiers' presence.

“If anyone thought they were coming this morning, we didn’t hear about it because everyone was sick of getting ready to go protect the house and nothing ever happening.”

Yaekob said that once the news spread, young men from Qalandia refugee camp and nearby Amari camp rushed to protect the house, but there were too many soldiers.

“The Israelis had positioned themselves in … six different areas of the camp. There was no way to get to the house the way we had planned,” Yaekob said. “We all just started fighting. Most of us were throwing rocks, but a few people opened fire at the soldiers.”

Yaekob said he saw Mansara and Aysh shot dead in front of him. Both of them, he said, were shot in the back. When they fell to the ground bleeding, they still had their guns in their hands.

Aysh was reportedly shot in his head, shoulder, and three times in his back, while Mansara was shot in the shoulder and died from what Yaekob said was blood loss, though medics have not confirmed his cause of death.

According to Yaekob and other witnesses, Israeli forces stopped ambulances from coming to their aid.

“They didn’t go out to kill soldiers, none of us did, the soldiers came to us.”

Issa Taiya, 55, who has lived in the camp his whole life, said he watched the situation unfold from his window.

“The soldiers came into the camp out of nowhere, no one expected it, and before we knew it they were on all of our roofs and inside every tall building,” Taiya said. “They didn’t leave one building in the area without soldiers on the roof.”

Taiya said once the soldiers had positioned themselves on the roofs in the area, more Israeli forces stormed in. There were more soldiers than he had seen inside the camp since raids during the Second Intifada, he said, referring to the more than four-year Palestinian uprising that ended in 2005.

“There were 1,500 [soldiers], at least. Some were in jeeps, others on foot, some of them undercover dressed like Palestinians. They just swarmed the area.”

Taiya said by that point the young men of the camp had already received word and began to mobilize, determined to stop the home demolition and push the Israeli forces out of Qalandia.

“We heard that maybe an Israeli soldier was killed during the start of it, and I swear my first reaction was I wish there were 10 more of them dead,” he said. “I would drink the soldiers' blood if that meant protecting this camp.”

Residents of the camp have reported that at least two Israeli soldiers were shot and injured, but an Israeli army spokesperson denied such claims, telling Middle East Eye that “no soldiers were injured” during the incident.

Despite the fierce clashes, Israeli forces were able to demolish the home of Abu Shahin, and retreated once the job was finished.

Mohmmed Mahmoud, a resident of the camp, told Middle East Eye that the area around the home was evacuated and there were few witnesses of the demolition, but that after Israeli forces left everyone rushed to see the damage.

“The explosion we heard was huge,” Mahmoud said. “The bomb was so big it damaged the houses around it as well, not just [Abu Shahin’s].”

Demolishing the homes of family members of Palestinians who have attacked Israeli forces and civilians is an Israeli government policy that was established with the aim of deterring future attacks.

The practice has been criticized by human rights groups around the world as a form of collective punishment.

In 2005 punitive demolition orders were stopped, as Israeli forces found them to be ineffective deterrents against violence. However, last year, after the kidnapping and killing of three teenage Israeli settler students, the practice was reinstated.

Since the start of October, when attacks against Israelis sharply increased, Israeli leaders, including Prime Minister Benjamin Netanyahu, have repeatedly called for punitive measures against the family of attackers to be expedited and increased. 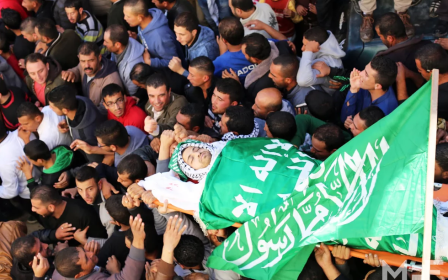