A Filipina has been arrested in Saudi Arabia on suspicion of helping a Syrian to make explosive belts for suicide attacks in the kingdom, the interior ministry said on Saturday.

The Syrian, identified as Mohamed al-Barazi, is suspected of turning the house they shared in the Saudi capital into a bomb factory, the ministry spokesman said.

Barazi is also accused of having a second house in Riyadh which he ran as a safe house for militants on the run.

He was detained in a police ambush in the capital on Wednesday, the spokesman said.

Police then raided the suspected bomb factory which they found had been booby-trapped.

The Filipina was named by the official Saudi Press Agency as Lady Gioi Aban Bali Nang and was said to have gone missing from her employer 15 months ago.

She was said to be wearing a suicide vest at the time of her arrest.

After the house had been made safe, police recovered two explosives belts, 10 containers of bomb-making materials and two firearms, the ministry said.

Asked on state television whether Barazi was suspected of links to the Islamic State, the spokesman said authorities "did not yet have sufficient evidence to make any direct connection with this terrorist group."

A series of attacks claimed by IS in Saudi Arabia this year have killed dozens of people.

In July, authorities announced that they had detained 431 people, most of them Saudis, on suspicion of involvement in an IS cell.

Saudi Arabia has taken part in the US-led air war against IS in Syria since September last year raising fears of revenge attacks. 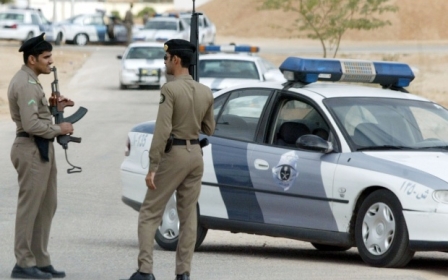