A UN human rights chief on Friday urged an investigation into a Bahraini security raid that killed five people last month and expressed concern at what he called a crackdown on dissent in the Gulf kingdom.

Bahraini police pushed into Diraz village outside the capital Manama on 23 May, according to the government, to arrest suspected militants and others wanted on security charges.

But activists from the country's Shia majority accused the Sunni-led authorities of using excessive force to intimidate the sect and its spiritual leader, Ayatollah Isa Qassim, who lives in Diraz and was guarded by supporters.

Five were killed and 286 arrested as they confronted advancing police, who used tear gas and birdshot.

"I urge the government to investigate the events of 23 May, in particular the loss of lives, to ensure that the findings are made public and that those responsible are held accountable," the UN High Commissioner for Human Rights, Zeid Ra'ad al-Hussein, said in a statement.

"I urge Bahrain to choose a different path – one of engagement and dialogue, as well as accountability for violence, regardless of the perpetrator," he added.

There was no immediate response by the Bahraini government to the statement, but it denies targeting the Shia sect or any systematic abuse of rights.

The UNHCR’s statements come after the Hussain Aldaihi, deputy secretary general of the al-Wefaq movement, Bahrain’s main opposition group, called on the UN to carry out an investigation in the kingdom.

"After all these crimes and violations and after the Diraz massacre, is it not high time for the United Nations secretary general to send a special representative to Bahrain?" Aldaihi told Middle East Eye.

He accused the international community of complicity in the killings and the authorities' actions against Qassim.

"We believe that this latest escalation and the attack against Diraz, as well as the targeting of Ayatollah Qassim, have taken place based on American and British approval, and are a result of the international community's silence and complicity in the crimes committed against the political majority as well as the majority of the population in Bahrain," he said.

Bahrain and neighbouring Saudi Arabia put down 2011 "Arab Spring" protests led by the Shia community demanding more rights and representation. Shootings of protesters and attacks by militants on security forces have since persisted.

The government says the opposition foments violence with the help of its arch-rival, Shia Iran, a charge Tehran denies. 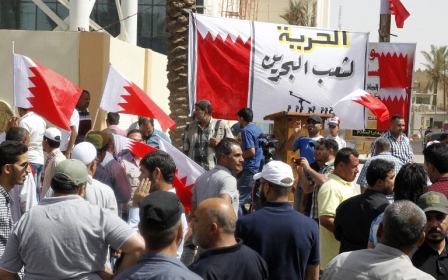