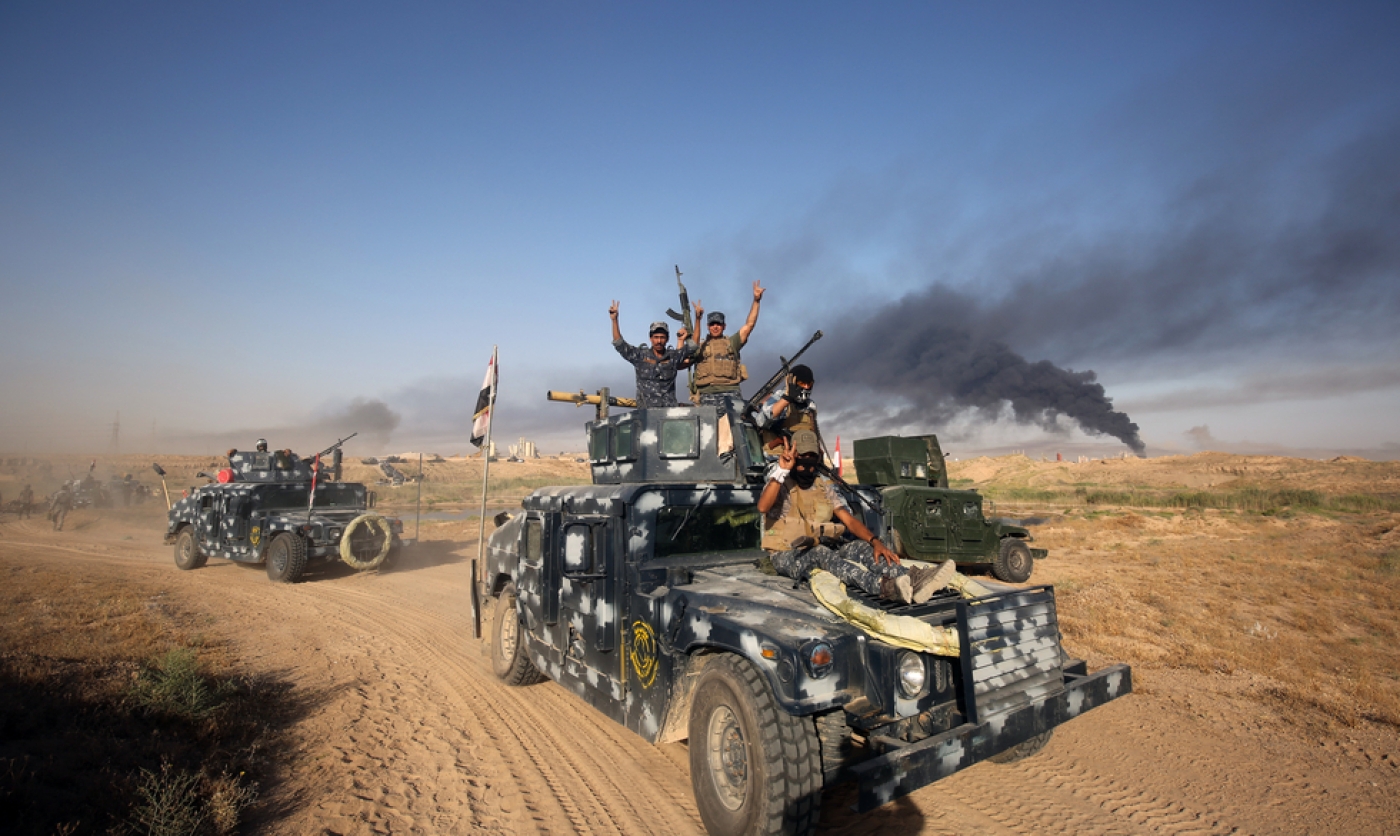 Iraqi pro-government forces advance towards the city of Fallujah on 23 May 2016, as part of a major assault to retake the city from Islamic State (IS) group (AFP)
By
MEE staff

The United Nations has warned that around 50,000 civilians in the Islamic State-controlled Iraqi city of Fallujah remain "at great risk" as Iraqi forces advance.

The body has called for safe corridors to be established to allow civilians to flee from the embattled city, where reports have emerged that civilians are being used as "human shields."

"Civilians are under grave danger as they try to flee," said Stephane Dujarric, according to AFP.

On Sunday, Iraq's Joint Operations Command warned civilians still in Fallujah to leave and asked families that could not depart to raise a white flag over their location and stay away from IS headquarters and gatherings.

Though UN Refugee Agency officials say several dozen families have fled the city, IS has reportedly sought to prevent civilians from leaving, as have forces on the government side.

Lise Grande, the UN humanitarian coordinator in Iraq, told Vice News on Monday that she was "deeply concerned" about the fate of Fallujah's civilians and the threat from "airstrikes, artillery, and crossfire".

"We are deeply worried by reports from people inside Fallujah that Daesh (IS) is rounding up families and using them as human shields," she added. 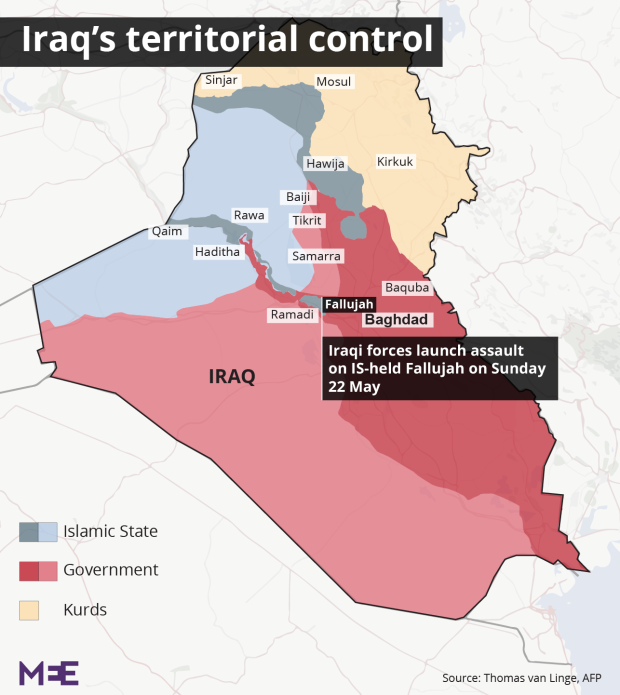 Fallujah, a Sunni-dominated city on the banks of the Euphrates River 65 kilometres west of Baghdad, was seized by the militants two years ago. Iraqi forces have surrounded the city for several months while the campaign to liberate it has been delayed repeatedly by disagreements between the Iraqi side and the US-led coalition over participating groups and timing of the offensive.

More than 30,000 Iraqi troops headed by counter-terrorism units are poised to invade the city.

Iraq’s government has dubbed the operation the “Break-Up of Terrorism.” Iraqi regular troops and anti-IS Sunni paramilitary factions will make their way into the city, while other units, including Shia paramilitary factions, will provide back-up and secure the region around Fallujah, military officers told MEE.

The first stage of the offensive began about 2am local time and included pounding the city with artillery and air strikes.

"Preparatory operations have begun. Our forces are ready and waiting for zero hour to raid the city," Sabah Nuaman, a spokesman for Iraq’s counter-terrorism units, told MEE.

"Fallujah is on the flank of Baghdad and was the base from which many terrorism operations were launched. It must be liberated to secure Baghdad and ensure the stability of the surrounding areas," Nuaman said.

In recent months, Iraqi security forces have been steadily capturing the cities and towns of Anbar province, most of which had been under the control of IS since the summer of 2014. The border Iraqi city of Rutba, which occupies a strategic location on the Amman-Baghdad road, was retaken on Wednesday.

Fallujah is the last big city held by IS in Anbar, and to dislodge the militants would mean the end of the group in western Iraq. By recapturing Fallujah and several small towns, Iraqi troops will be free to advance to Mosul, officers said.

"We are looking to move on and retake Mosul, and we can’t do that while Daesh (a local term for IS) still controls a sector near Baghdad like Fallujah," Nuaman said. "We’ve regained control over the rest of Anbar province. Fallujah is the last.”

'Head of the snake'

On Sunday morning, Iraqi planes dropped leaflets over Fallujah asking people to be ready to leave and instructing them to avoid IS gatherings or command posts. The leaflets also advised residents who remained in the city to raise white flags over their shelters and to isolate themselves from the militants.

Fallujah has at various times harboured most Iraqi Sunni militant groups, and has been used by the militants as a symbol to recruit fighters from around the world and to raise funds, security officials and analysts said. It is seen by most Iraqis as the main hotbed of IS in western Iraq.

"Falluja is the head of the snake, and when the head is removed, the snake will die," Wahab al-Taie, an independent Iraqi security analyst, told MEE. "Finishing Daesh in Falluja will break it in Iraq. It will be just a matter of time."

Many international and local humanitarian organisations, including the UN mission in Iraq, as well as local officials, have been warning of a "serious shortage of food and health care" inside Fallujah. Little verified information about the situation inside the city has been available, but tens of thousands people are trapped there, under siege, and there is sure to be a shortage of food and medical care, federal and local officials agreed.

Concerns have also been raised about the presence of the paramilitary Popular Mobilisation Units (PMUs) in the assault.

Although many of the volunteers in the PMUs are Sunni, there have been fears that the Shia-dominated PMUs could enact sectarian reprisals against the residents of Fallujah.

Jumaa al-Jumaili, a commander of local Sunni tribal forces, told the Washington Post that the Shia militias had agreed to fight on the outskirts of the capital as their presence would help the city's residents "rise against" IS.

However, a journalist from the Bild newspaper shared a video on Twitter purporting to show the Iranian-backed Kataib Hezbollah shelling the centre of the city:

Kata'ib Hezbollah shelling Fallujah. Hashd are actually involved and not just outside the city as claimed by ISF. pic.twitter.com/Plp9qli4FB 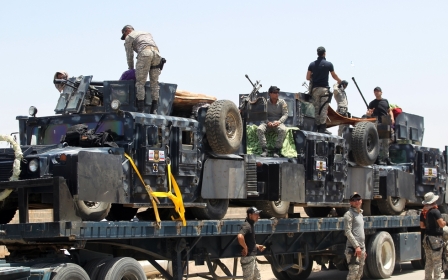 Inside Iraq
Iraq launches offensive to retake Fallujah from IS