On the outskirts of Syria's Manbij, Kurdish-led fighters have dug trenches and US-led coalition soldiers patrol from land and sky after Turkey threatened to overrun the northern city.

Turkish President Recep Tayyip Erdogan has repeatedly threatened to launch an attack on the city, near which US troops are stationed as part of their support to a Kurdish-led alliance fighting the militants.

Pro-Ankara Syrian rebels control territory to the north and west of the city held by the Kurdish-led Syrian Democratic Forces (SDF) alliance.

The rebels control Jarablus near the Turkish border to the north, as well as Al-Bab to the west of Manbij.

On its northern flank, only a few hundred metres separate the positions of the pro-Ankara rebels and the SDF, which has spearheaded the fight against the Islamic State group.

Outside Manbij, as spring turns the surrounding hills bright green, Kurdish fighters have been consolidating their positions in preparation for a possible assault.

On the front line, the facade of a derelict home sheltering SDF fighters was riddled with bullet holes.

"We're on high alert. There are always skirmishes at night," Kurdish fighter Shiyar Kobane said. "They fire mortar rounds and shell our positions."

At a US military base near the city, three armoured cars bearing the US flag were driving back to camp after completing a mission.

US base between olive trees

A helicopter flew overhead after taking off in a swirl of dust from the base, fortified with mounds of rubble between olive trees.

The Syrian Observatory for Human Rights, a Britain-based monitor with sources on the ground, says around 350 members of the US-led coalition - mostly American troops - are stationed around Manbij.

Military sources on the ground, the Observatory and pro-Damascus newspaper Al-Watan say the coalition has sent in reinforcements, heavy artillery and other military equipment to the area.

An AFP correspondent saw the US troops even after President Donald Trump said on Thursday that he would pull forces out of Syria "very soon".

Trump was speaking the same day that two members of the coalition - an American and a Briton - were killed by an improvised explosive device in Manbij.

Since 2014, the coalition has provided weapons, training and other support to forces fighting IS militants in Syria and neighbouring Iraq.

Turkey-led forces last month seized control of the Kurdish enclave of Afrin to the west of Manbij after a two-month assault that killed scores of civilians and displaced tens of thousands of civilians.

Ankara views the Kurdish People's Protection Units (YPG) militia that controlled Afrin as "terrorists", although the YPG formed the backbone of the US-backed SDF that has ousted IS from much of Syria.

Erdogan has warned that Turkey could extend the Afrin offensive to Manbij.

Trenches have been dug outside the city and checkpoints erected to thoroughly scan the identity papers of those entering the city.

"We're taking the Turkish threats seriously," Mohammed Abu Adel, the head of the Manbij Military Council - a part of the SDF - told AFP.

"The international coalition has increased the number of its forces in Manbij," he said.

Abdelkarim Omar, a top foreign affairs official with the Kurdish semi-autonomous administration in northern Syria, said US forces were not likely to leave the country any time soon.

"It's premature to speak of any American withdrawal," he said.

"Terrorism is still present," he added, referring to IS fighters.

Two offensives - one by the SDF and another by the government - have expelled the militants from much of Syria.

But IS fighters still cling to pockets of territory in eastern Syria and maintain the ability to launch deadly attacks.

They carried out a spate of attacks that killed 19 pro-government fighters last week in eastern Syria, and in March seized a district of the capital. 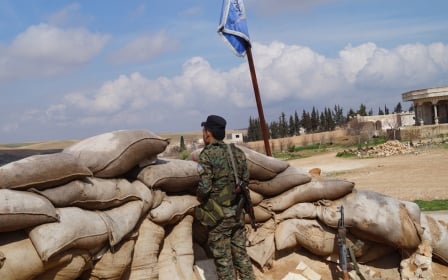