US-backed Syria force advances into Raqqa, battles for base 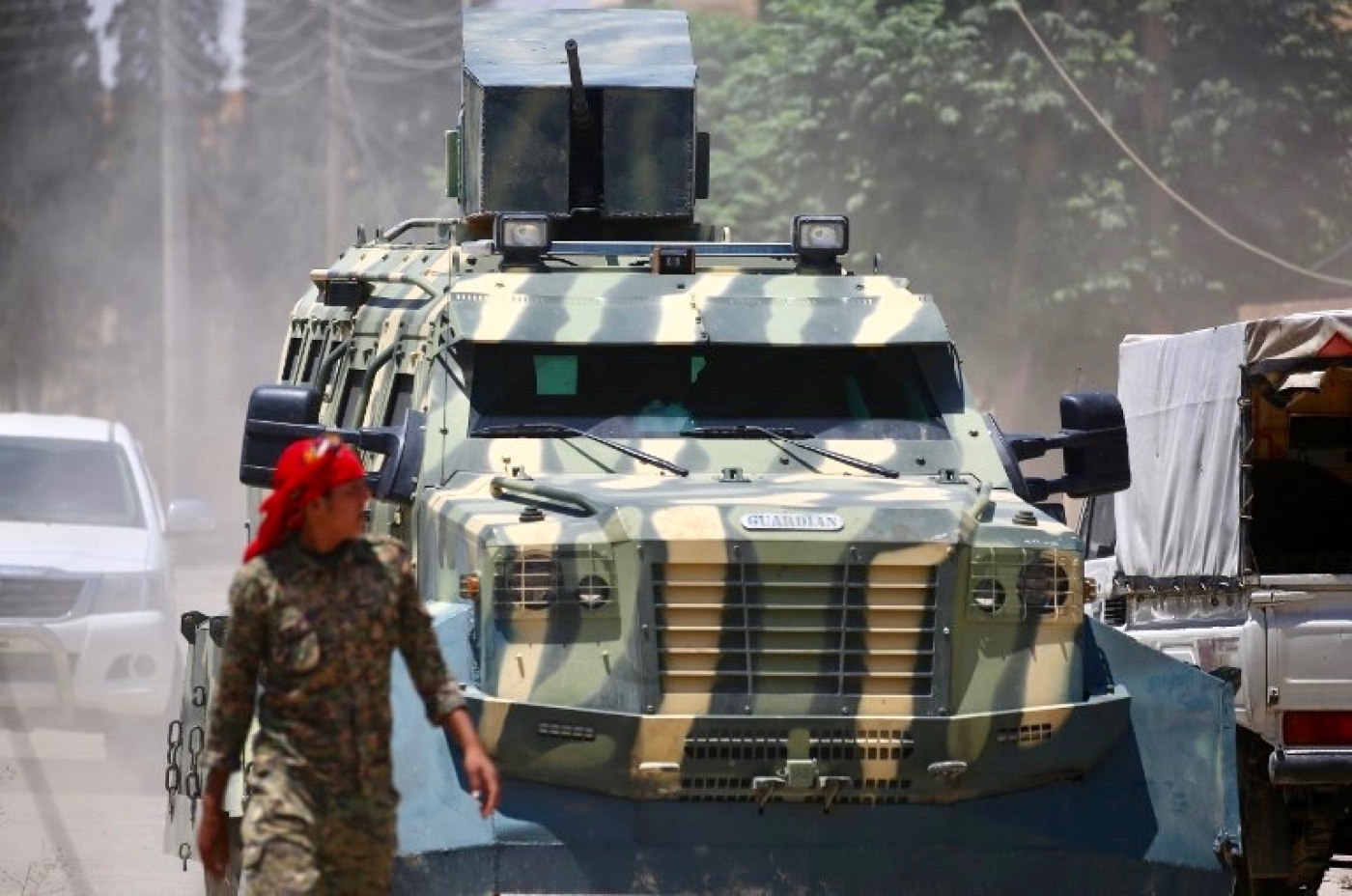 Member of Syrian Democratic Forces, made up of alliance of Kurdish and Arab fighters, walks in front of armed military vehicle at western front of Islamic State group's Syrian bastion of Raqqa after seizing area from militants on Sunday (AFP)
By
MEE and agencies

US-backed Syrian fighters seized a second district of Raqqa on Sunday and launched a renewed assault on a base north of the city, as they pursued an offensive against the Islamic State (IS) group.

The Syrian Democratic Forces (SDF) broke into Raqqa earlier this week after announcing the start of a final assault on the IS-held city.

On Sunday, the Arab-Kurdish alliance said its fighters had "liberated the neighbourhood of al-Romaniya on the western front of Raqqa, after two days of continued clashes".

The SDF also holds the al-Meshleb district, which it seized after announcing the final push for Raqqa city on Tuesday.

Since the SDF first broke into Raqqa on 6 June, at least 67 IS militants and 58 civilians have been killed, the Syrian Observatory for Human Rights monitoring group said. There was no immediate toll for SDF fighters.

On Sunday, fighters in al-Meshleb were pushing deeper towards the city centre.

YPJ cmndr of Raqqa op Klara Raqqa & YPJ spox @cihan_shekh filmed near Raqqa. These are the women leading defeat of daesh in their capital. pic.twitter.com/77YbgTnjmJ

The Observatory said they had also seized almost half of the adjacent district of al-Senaa from the militants.

"If they're able to take the whole neighbourhood, it would be their most important advance to date because it would put them at the gates of the Old City," Observatory chief Rami Abdel Rahman said.

The western approach to the city was littered with mangled motorcycles and unexploded mortar rounds fired by IS, an AFP correspondent said.

Three bodies of IS militants lay in the eerily empty streets of western Raqqa, and SDF commanders took up positions on the rooftops of one-storey houses.

The SDF fighters appeared on edge, both over IS-planted mines and reconnaissance drones that the militants have weaponised.

"Daesh is shooting anyone who sticks their head out," one SDF fighter said, using the Arabic acronym for IS.

Artillery, sniper fire and air strikes rang out throughout the day and thick black smoke billowed from the city skyline.

Bombardment had taken chunks out of the white dome of a neighbourhood mosque, and the notorious black IS flag hung limply from a nearby roof.

After its capture by IS in 2014, Raqqa city emerged as a key hub for IS's operations in Syria, neighbouring Iraq and beyond.

The SDF - an Arab-Kurdish alliance formed in 2015 - spent seven months tightening the noose on Raqqa city from the north, east and west.

The fighters have made less progress on the northern front, where militants are using a military base and an adjacent sugar factory to defend the approach into the city.

On Sunday, they battled to dislodge the militants from the Division 17 base, with backing from the US-led coalition bombing IS, the Britain-based Observatory said.

Originally a Syrian army base, Division 17 was seized by IS in 2014 when it took control of swathes of the wider Raqqa province.

Abdel Rahman said IS had "heavily fortified" the base in anticipation of a ferocious SDF assault.

An estimated 300,000 civilians were believed to have been living under IS rule in Raqqa, including 80,000 displaced from other parts of Syria.

Thousands have fled in recent months, and the UN humanitarian office estimates about 160,000 people remain in the city.

They have no electricity and are facing severe water shortages, according to the activist collective known as Raqqa is Being Slaughtered Silently.

"Most of the bakeries are closed because of the lack of flour," the group wrote on Sunday.

The Observatory said that coalition air strikes on Saturday killed 24 civilians inside Raqqa, up from an earlier toll of 13.

Human rights groups have warned of the potential of high civilian casualties during the assault, calling for the US-led coalition to ensure it would minimise risks for civilians as much as possible, Deutsche Welle said.

To back the assault, the US-led coalition has provided the SDF with air cover, special forces advisers, weapons and other equipment.

The alliance first began bombing IS positions in Iraq in August 2014, and expanded its operations to Syria the following month.

In addition to heavy raids on Raqqa, the coalition also pounded the IS-held town of al-Mayadeen in eastern Syria on Sunday, the Observatory said.

"Many of IS's second-tier leaders fled to al-Mayadeen when the offensive for Raqqa started months ago," said Abdel Rahman.