Members of Syrian Democratic Forces rear guard while their comrades advance towards Islamic State positions in Raqqa, Syria, on Sunday (Reuters)
By
AFP

US-backed forces fought pitched battles on Sunday with Islamic State (IS) group militants inside their Syria bastion of Raqqa, an AFP correspondent said.

The Syrian Democratic Forces (SDF), an Arab-Kurd alliance, entered Raqqa two months ago and have since captured more than half of the northern city, but their progress has met fierce resistance from IS.

On Sunday, the two sides battled inside Raqqa's Old City, trading volleys of mortar rounds and heavy machinegun fire, said the correspondent, who was on the outskirts of the historic centre.

A warplane from the US-led coalition provided air cover and bombed IS positions in the Old City, with plumes of smoke billowing into the sky.

"There is heavy fighting. Our forces are trying to surround more and more Daesh (IS)," said Nuri Mahmud, a spokesman for the Kurdish YPG militia that dominates the SDF.

He said IS militants were "using every means at their disposal to survive".

Near the ancient wall surrounding the Old City, the AFP correspondent saw SDF fighters help five wounded comrades to safety after they were hit by shrapnel from a landmine explosion.

IS militants have heavily mined the city to slow the SDF advance, and are also using booby-trapped cars, drones and suicide bombers.

Nevertheless, the US-backed alliance has seized nine districts in the city's west and east since first entering Raqqa on 6 June after a months-long campaign.

The fight for Raqqa has prompted tens of thousands of civilians to flee, with many wounded by crossfire or IS-planted explosive devices during their escape.

The United Nations has estimated that between 20,000 and 50,000 people remain in the city, though others have given lower estimates. 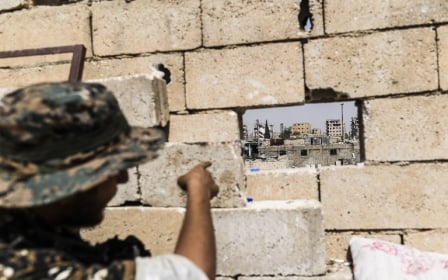