In a 'first meeting of its kind', Iraqi army and SDF commanders preview what security measures might look like after IS loses its final territory Commanders from both the Iraqi army and the US-backed Syrian Democratic Forces (SDF) met on Sunday within the border zone between northeastern Syria and neighbouring Iraq to “consult on coordinating” border security amid IS's waning presence there, SDF spokesman Mustafa Bali told Syria Direct. He called it “the first meeting of its kind” between the two forces.

Sunday’s meeting appears to be a preview of what post-IS security measures could look like, including possible shared military posts between the SDF and Iraqi army, as IS loses its last remaining territory in northeast Syria and west Iraq.

The meeting’s purpose was to “prevent infiltration by Daesh [IS] on either side of the border”, said spokesman Bali. Commanders agreed to set up military observation points along the border, though “there is no timeline” for construction of the outposts, SDF spokeswoman Leilawa Abdullah told Syria Direct from Syria’s eastern Deir Ezzor province. 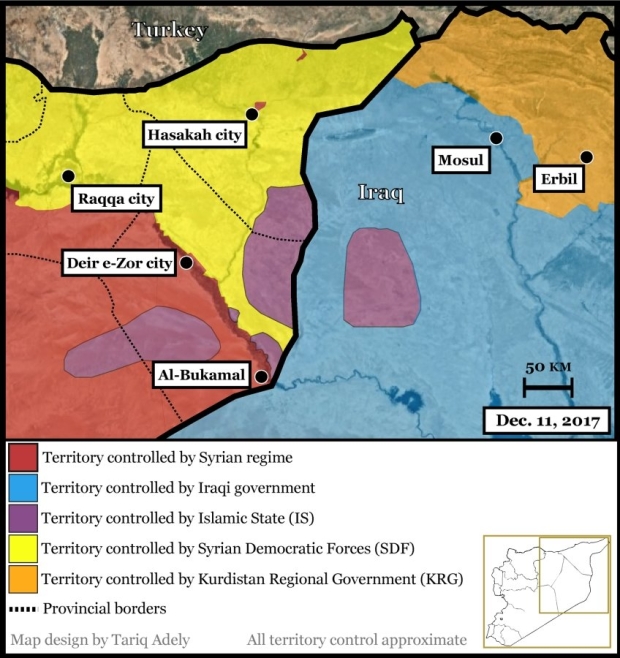 American Colonel Ryan Dillon, spokesman for the US-led anti-IS coalition that provides military support to both the SDF and Iraqi forces, published pictures on Monday on Twitter of commanders from both sides meeting one another in a desert border area.

Sunday’s meeting came as both the SDF and Iraqi army rack up wins against IS on their respective sides of the border.

In Baghdad, Iraqi Prime Minister Haider al-Abadi announced “victory” against IS on Saturday, after government forces seized the last remaining stretch of Iraqi-Syrian borderland still under the militant group’s control.

The speech in the Iraqi capital came more than three years after IS first swept across Syria and much of western Iraq, establishing a vast self-declared caliphate that stretched from rural Aleppo to Mosul and enforced a harsh, puritanical interpretation of Islam.

But today, after a series of major offensives by international and local forces, IS territory in Iraq and Syria has been reduced to isolated pockets.

Most recently, the Islamic State has lost thousands of kilometres of territory in Syria’s eastern Deir Ezzor province since September as separate offensives by the SDF and Syrian government troops sweep through the oil-rich province.

SDF forces are battling for control of a roughly 4,000-square-kilometre pocket of IS-held desert west of the Syrian-Iraqi border in Deir Ezzor province

Today, SDF forces are battling for control of a roughly 4,000-square-kilometre pocket of IS-held desert immediately west of the Syrian-Iraqi border in Deir Ezzor province.

The pocket was once at the centre of the IS’s oil-rich central heartland, today largely held by the majority-Kurdish SDF.

Eastern Syria after IS

As IS’s once vast caliphate appears to reach its final days, and its fighters flee the battlefields, what might post-defeat security look like in eastern Syria?

For both SDF and Iraqi forces stationed adjacent to one another along the northern Syrian-Iraqi border, the need for post-IS security means the two sides - which have no apparent history of direct military cooperation - could be poised for at least some form of closer coordination.

The cross-border meeting on Sunday “did not cover the possibility of launching a joint military campaign”, SDF spokesman Bali told Syria Direct. Rather, “what was discussed was how to resist Daesh [IS] attempts at destabilising the area”.

'I would go tomorrow': Inside Kirkuk after the changeover
Read More »

Cooperation between the two sides would contrast with the Iraqi army’s recent treatment of Kurdish-led forces in nearby Iraqi Kurdistan.

In October, Iraqi government forces attacked and later seized the city of Kirkuk from Kurdish peshmerga forces there, days after residents in Iraq’s autonomous northern Kurdistan region voted for independence from Baghdad in a controversial referendum.

But in eastern Syria, SDF spokesman Bali said on Monday that he welcomed potential cooperation with Iraqi forces as “a positive development”.

“We look forward to better relations with all those in our proximity, in order to preserve security and stability,” Bali said. “And we see [Sunday’s meeting] as an implicit recognition of our forces.”