Elite troops support SDF fighters in operation to seize control of northern Raqqa, the home province of IS 'capital' 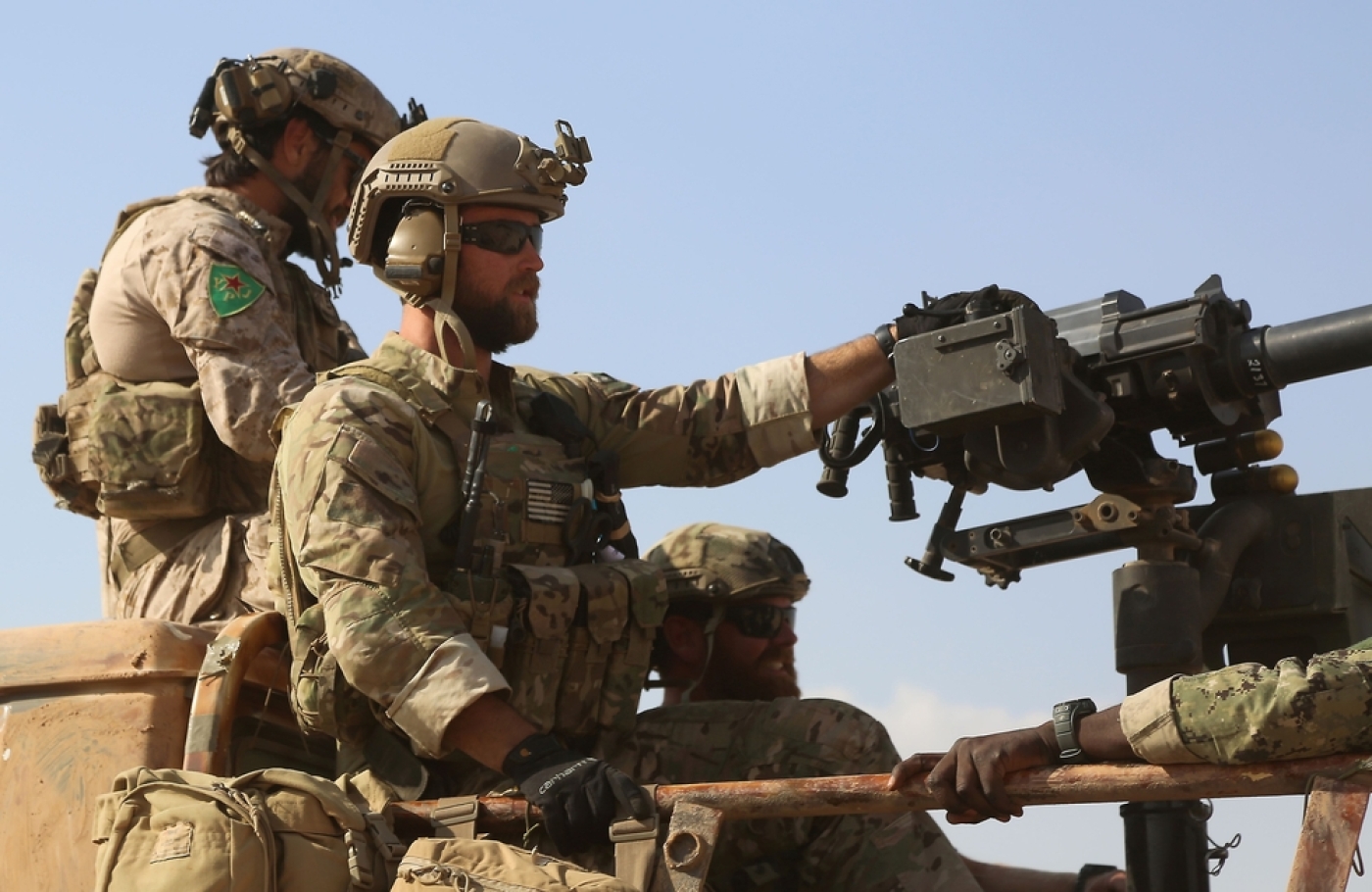 US soldiers, one apparently wearing the badge of the YPG, in Fatisah, Raqqa province, on 25 May (AFP)
By
Wladimir van Wilgenburg

AYN ISSA, Syria - At a base in northern Syria, US special forces can be seen providing targeting assistance and artillery fire in support of the Kurdish-led Syrian Democratic Forces (SDF) in their operation to clear the countryside of northern Raqqa, near the Islamic State (IS) group's self-declared capital.

There is a clear coalition presence on the ground here, as opposed to last year, when Western soldiers were nowhere to be seen. British, US and French special forces are assisting the SDF on the ground in an operation that has so far advanced 6km and aims to dislodge IS from its northeast Syrian bastion.

Pictures show US troops manning a grenade launcher in Fatisah, Raqqa. One shows what appears to be a US soldier wearing a badge of the YPG, an element of the SDF that defended Kobane from IS attacks in 2014 and last year.

Heval Gabar Tolhildan, an SDF volunteer from Canada, told Middle East Eye: “They are working with us, and they give lessons and training for air strikes, communications and strategy. They are firing, mortaring and helping with air strikes.

“They are not leading the operation, so it’s good, but they can give more supplies and weapons.

The campaign was launched on Wednesday, just days after the recent visit of US Central Command chief, General Joe Votel. His visit came on the back of the Obama administration deciding to send an additional 250 troops to aid the Raqqa operation.

“We did not see the general, that was more for the media. However, if we see US soldiers on the frontlines, it gives us a higher moral,” Tolhildan said.

Local Kurdish commanders do not permit videos or photos to be taken of the US special forces. However, footage claiming to show US troops with SDF forces has already been published on social media.

US forces have also been seen driving trucks escorted by Kurdish anti-terrorism teams, known by their acronym HAT.

Despite the presence of the elite US troops, local Kurdish fighters maintain they need more weapons to defeat IS.

“For the liberation of Raqqa we need more weapons,” Abu Ahmed, a fighter from the Syrian city of Deir Ezzor, told MEE. “After Deir Ezzor is liberated, we will give you one oil well,” he joked, indicating that the SDF also want to play a future role in the city, which is south of Raqqa.

“Up to now, that support has been small. We have a lot of fighters, but few weapons. If they provide us more weapons, it would be good because the tactics of the mercenaries [IS] are very advanced,” said Heval Soresh, a local Kurdish fighter. “If we have more weapons we can take Raqqa easily."

“Up to now, it’s only ammunition. We need weapons like artillery, armoured cars and anti-tank rockets,” Silo said.

Although fighters have called for heavy weaponry, some light arms have been reportedly given to officers as gifts after meetings – including M4 and M16 assault rifles as well as some heavy machine guns.

However, one fighter who asked to remain anonymous, said those weapons would not be useful in tackling IS.

“These hand pistols are not useful, since ISIS will never come closer than 50 metres during battle,” the fighter said, using an alternative acronym for IS.

PHOTOS: #US special forces in Fatisah after it was taken from #ISIS by the SDF #Raqqa #Syria - @DrPartizan_ pic.twitter.com/ib1PEuVIHf

The US is most likely reluctant to provide heavy weapons to the Kurdish forces because of sensitivities with NATO ally Turkey.

Ankara is at war with Kurdish militants domestically and Turkish authorities have urged against any US support for Kurdish forces inside Syria.

“We understand their [Turkey’s] concerns regarding Kurdish forces in northern Syria,” US State Department spokesman Mark Toner said last Monday. The Turkish army on 23 May warned the US not to trust the Syrian-Kurdish militia YPG.

As a result, the US has tried to build up more Arab forces within the SDF and is training 200 Arab fighters at a base near Hasakah in northeast Syria. The SDF itself is also recruiting more Arabs.

Senior Kurdish officials said that in the future, Raqqa could be part of a federal region in northern Syria administrated by local Arabs.

“I think we're going to force the governance [of Raqqa] to be Syrian Sunni Arabs, preferably from Raqqa-area tribes and residual original governance entities. That's the way it should be,” General John Allen, former special envoy to the global coalition against the Islamic State told MEE.

“I'd be very surprised if we're not already working with elements of local tribes and expatriate Raqqa civil leadership to conduct stability operations in the immediate aftermath of the clearing operation.

"This would include establishment of local security police and governance as well as immediate stability activity and essential services, detainee operations, medical support,” he said.

Increasing support for the SDF has prompted jealousy and anger among Syrian opposition rebels based in Aleppo and Turkey, who have warned the US this could lead to a conflict between Arabs and Kurds.

However, opposition fighters that are part of the SDF reject the criticism. Abdullah Qattab al-Saif, a leader of a small Free Syrian Army brigade asked these rebels to come and fight on the ground.

“I am not Kurdish, and I am an Arab and son of the tribes, one of the biggest tribes in Raqqa province,” he told MEE.

“They oppress Kurds in Turkey, but the Kurds are assisting anyone who fights ISIS and the Kurds are Syrian and there are no differences between Arabs, Kurds, Alawites, Muslims and Christians,” he said.

“The SDF forces have all ethnic groups and religions, but sadly no one loves the truth, and those who lie about us are sitting in internet cafes in Turkey fabricating lies,” he said.

The Raqqa operation is still in its early stages, but with at least four villages captured since Tuesday, it is proving a gradual success so far.

“We have civilians to worry about, and the depth of the attackers’ force can't sustain a lot of casualties. It won't be fast. I don't think ISIL will break contact and flee, but you never know. If we take Raqqa, we may begin to see a general breakdown of their command-and-control system,” he said.

However, some Kurdish officials are concerned that if they are successful in taking Raqqa, they may lose support from the US, as the Kurdish forces will seek to fight on and take Manbij, which is west of Raqqa and the Euphrates river, before moving on to battle for the besieged Kurdish town of Efrin in Aleppo province.

Despite these concerns, a former senior Kurdish official said they remain committed to taking back the IS-held city.

“As long as Raqqa is under ISIS control, they will attack Kobane, Hasakah and Tal Abyad, so we have to defeat them,” Idris Nassan, a former senior official told MEE in Kobane.

Nassan said he believed a condition of the Kurdish forces fighting for Raqqa will be that the US agrees for them to move on towards Manbij.

“One condition of the coalition forces is for the SDF to liberate Raqqa, then they will allow them to go to Manbij,” he said.