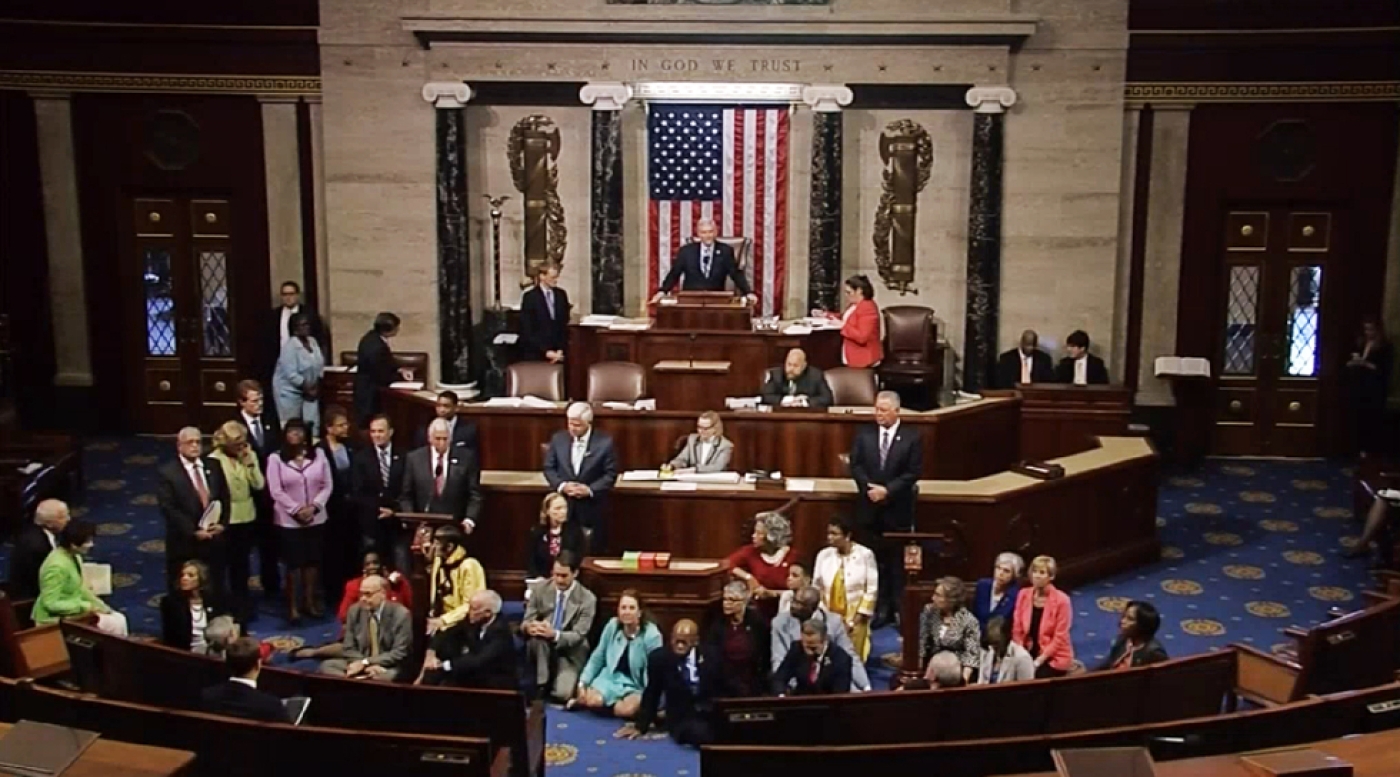 US Democrats failed to force Congress to vote on gun safety legislation following the Orlando nightclub massacre as Republican leaders adjourned the House early on Thursday after a dramatic overnight sit-in by Democrats.

The scenes on the House floor, unprecedented in recent history, began after Democrats took over the chamber's proceedings for most of the day on Wednesday, prompting Republican Speaker Paul Ryan to gavel the House into session late at night, nearly drowned out by chants of politicians protesting his effort to bring the sit-in to a close.

Ryan, who dismissed the protest as a "publicity stunt," refused to allow votes on two bills demanded by Democrats: one expanding background checks to include sales at gun shows and on the Internet, and another that prevents people on the government's no-fly list or FBI terror watchlists from buying a gun.

Instead, he called for votes on unrelated issues as he sought a return to regular order. Democrats shouted "No bill, no break!" referring to efforts to prevent Congress from adjourning for the Fourth of July holiday.

"The time for silence and patience is long gone," said House Democrat John Lewis, a civil rights icon who marched with Martin Luther King Jr in the 1960s and led Wednesday's protest.

"We're calling on the leadership of the house to bring common sense gun control legislation to the house floor. Give us a vote!" he added. "Do we have raw courage to make at least a down payment on ending gun violence in America?"

After another vote in the early hours of Thursday morning - on combatting the Zika virus - 15 hours after the sit-in began, the presiding officer adjourned the session for two weeks and Republicans began leaving the building.

Accusing Republicans of "slinking off in the middle of the night," he added: "The fight will continue when the House comes back in session" on 5 July following a national holiday on 4 July.

The congressional disobedience, which earned praise from President Barack Obama, reflects the escalating political confrontation of an extraordinary presidential campaign season, with Democrats cornering Republicans over an issue backed by the vast majority of Americans - even if gun-control legislation has virtually no chance of passing a vote.

The House drama began before noon, when Lewis and dozens of colleagues sat down on the carpeted floor in the well of the chamber.

US politicians, mainly Democrats, introduced several bills in recent years aimed at reducing gun violence, including legislation to expand background checks, but none has passed Congress.

"Who has to be shot, and how many have to die before we do anything?" asked congresswoman Robin Kelly of Illinois.

The chamber was scheduled to wrap up business on Thursday before going on break.

The sit-in, which quickly grew to about 100 members, drew the attention of the White House.

"Thank you John Lewis for leading on gun violence where we need it most," Obama posted on Twitter.

"House Republicans may have cut the cameras, but they can't cut off our voices," Democratic White House hopeful Hillary Clinton added in her own tweet. "We have to act on gun violence."

With the C-Span cameras that usually film scenes inside Congress turned off during the recess, the public broadcaster responsible for covering congressional sessions enacted a creative workaround, broadcasting live video from social media applications Periscope and Facebook, filmed by two politicians.

It was the first time C-Span aired live social media footage from the House floor - where taking pictures and video is prohibited.

There were extraordinary scenes in the chamber.

Congresswoman Tammy Duckworth, a former US Army helicopter pilot who was wounded and lost both legs in Iraq, sat with her colleagues on the carpet of the well, her prosthetics removed, her wheelchair empty beside her.

Top House Democrat Nancy Pelosi joined the rebels, then led several politicians and gun violence survivors and relatives outside onto the Capitol steps, where protesters sang the civil rights anthem "We Shall Overcome."

"Give us a vote," she demanded of Ryan. "A moment of silence? We want a moment of truth. We want a time of action to follow it."

Tensions soared on the floor late on Wednesday when some Republicans disrupted the sit-in.

"Radical Islam killed these people!" shouted Republican Louie Gohmert, as he pointed to images of the 49 victims of last weekend's Orlando shooting by a gunman. Orlando
Man claims he had relationship with Orlando killer: Reports