US Jewish community divided as Trump prepares to meet Netanyahu

For some, Trump's hawkishness on Israeli security is a blessing - for others, his links to the anti-Semitic far-right are dangerous 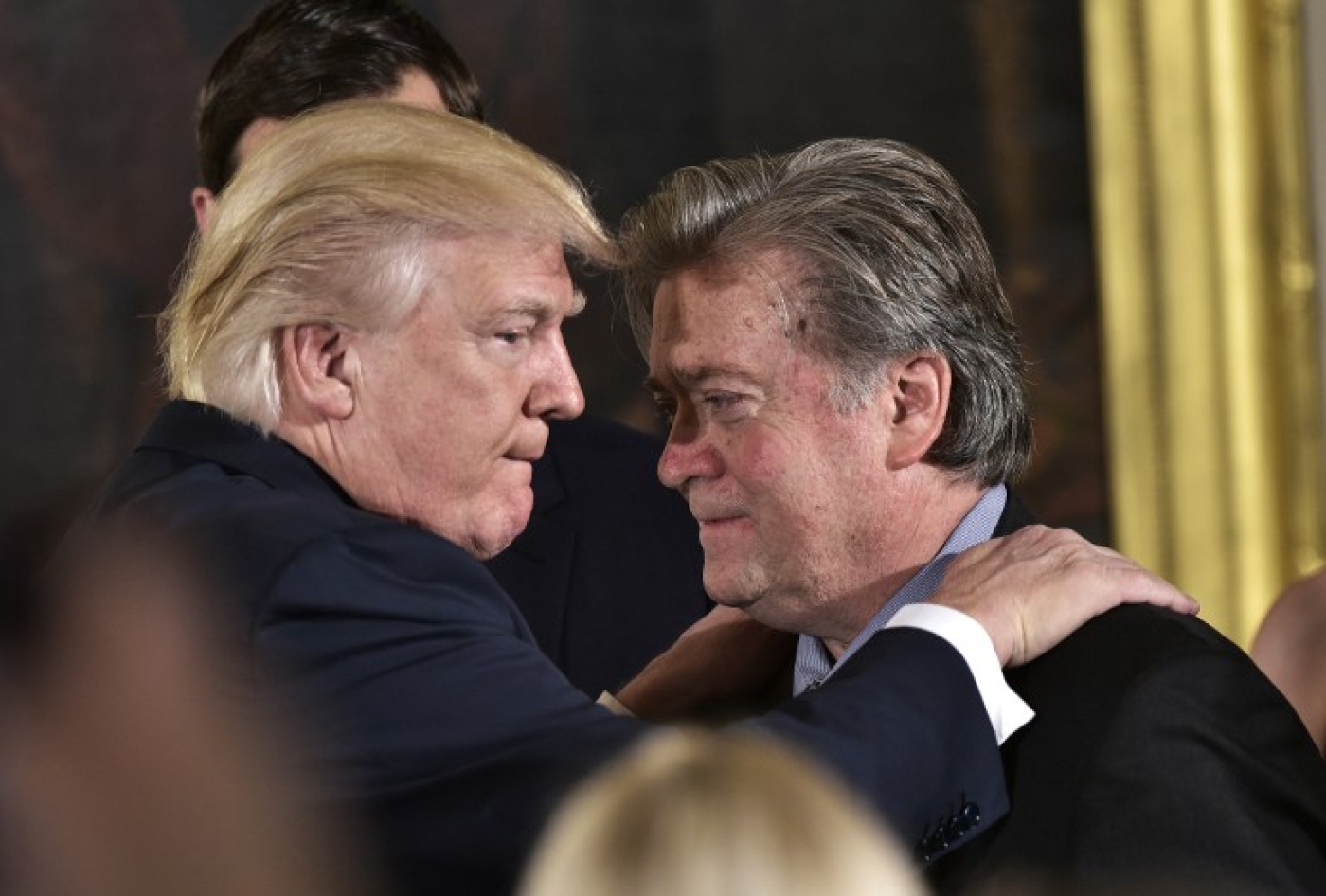 NEW YORK, United States – At first glance, President Donald Trump’s talk of boosting Israeli security and shifting the US embassy to Jerusalem is the kind of oratory that many American Jews want to hear, especially after years of strained US-Israel relations.

But the 45th president’s vocal support for Israel is only part of the story. Last month, the White House dropped any mention of Jews from an annual statement on the Holocaust. Anti-Semitic motifs in his campaign adverts and links to far-right white supremacists stoke fears further.

Meanwhile, Trump’s so-called “Muslim ban” on travellers from seven Muslim-majority nations rekindles painful memories of European Jews being denied a large-scale migration exit to US shores during the Nazi Holocaust.

Jacobs was one of 19 rabbis from her group arrested while protesting against the travel ban at New York’s Trump International Hotel on 6 February. She was charged with disorderly conduct and is due in court in April.

She pointed to the International Holocaust Remembrance Day statement, a Trump campaign advert that linked Jewish financiers with corruption, and Swastikas scrawled in New York subway cars and other examples of neo-Nazi graffiti since Trump’s election victory in November.

“We have not seen overt anti-Semitism like this in the US, certainly in my lifetime. Even if the president doesn’t come out and directly make anti-Semitic statements, he’s both dog whistling and enabling anti-Semites,” Jacobs told MEE.

She pointed to Steve Bannon, Trump’s right-hand man and chief strategist, who once ran the archconservative Breitbart news website that blends conspiracy theories with anti-Semitism, misogyny, homophobia and anti-Muslim jingoism.

American Jews are broadly left-leaning. In the 2016 election, 71 percent chose Democratic candidate Hillary Clinton against the 24 percent who voted for Trump. Both candidates spoke of their unflinching support for Israel at campaign events.

Since Trump won, his Jewish-American fans can point to gains. He appointed his son-in-law, Jared Kushner, as his Middle East adviser. Kushner, an Orthodox Jew, is married to Trump’s daughter, Ivanka, and is a family friend of Israeli Prime Minister Benjamin Netanyahu.

Trump talks of shifting the embassy from Tel Aviv to Jerusalem, Israel’s self-proclaimed capital and a holy city at the heart of the Israeli-Palestinian conflict, and of de-funding United Nations agencies that recognise Palestinian administrations.

This month, Trump’s UN envoy, Nikki Haley, blasted the UN for anti-Israel bias and objected to the appointment of Salam Fayyad, 64, a Western-educated economist and former Palestinian prime minister, to head the UN political mission in Libya.

Many see Trump as a chance to boost US-Israeli ties that were flagging after years of testiness between Netanyahu and former US president Barack Obama, who criticised settlement building in the West Bank and drew back support for Israel at the UN.

Since Trump’s inauguration, Israel has announced 5,000 new permits for Israeli settlement units in the West Bank and passed a controversial “land grab” law. Israeli hard-liners speak of dropping the goal of a “two-state” solution with Palestinians.

Iran climbs past Palestine in security concerns for Israel

Trump’s team is also taking a tougher line on Iran, which Netanyahu and Israeli security chiefs see as their main threat, at a time when the Islamic Republic is poised to gain influence in any peace deal that ends Syria’s catastrophic civil war.

When the Israeli leader meets Trump at the White House on Wednesday, he may seek assurances that Russia will not help Iran open a new front in southern Syria, with Iran’s Revolutionary Guards (IRGC) building a power base that could threaten Israeli towns.

“Beyond emotions, the Israel-Palestine dispute is no longer central to Mideast turmoil, if it ever was. Netanyahu will want to mostly talk about the nuclear deal with Iran and total ban on missile tests, and the role of Hezbollah and the IRGC in a future Syria peace deal.”

Analysts disagree on Israel’s best way forward, but they all recognise that American Jews are split over Trump. For some, his hawkishness on Israeli security is a blessing, for others, his link to the anti-Semitic far-right is too dangerous to overlook.

For Avni, claims that “Trump is a closet Nazi” are bogus, while the Holocaust omission was a “gaffe by a junior staffer”. “The idea that he was elected by an anti-Semitic, racist mob simply doesn’t stand up to America’s reality,” Avni told MEE.

Seth Morrison, a campaigner for the liberal group, Jewish Voice for Peace, disagreed.

“Netanyahu ignores Trump’s alt-right connections just as he ignores the fact that Christian Zionists only support Israel to bring on Armageddon,” Morrison told MEE. “Trump’s a populist and opportunist with poor understanding of history and ideology.

“He uses both Jewish support for Israel and alt-right fundamentalism equally to his own ends.”

Michael Koplow, an analyst at the Israel Policy Forum think tank, said that while there are “plenty of bright red flashing warning signs” from Trump’s hardliners, it was still too soon to tell how the dynamic between the US, Israel and American Jews would play out.

This week’s meeting with Netanyahu is an opportunity for Trump to state his “red lines” on settlement-building and other policies, he said. Despite the racist headlines on Breitbart, there may yet be deep synergies between right-wingers in Washington and Jerusalem. Trump
Trump's Valentine: From the White House to IS, with love
David Hearst