US kills Trinidadian IS fighter, then adds him to terrorism list

Shane Crawford, believed to be the first Trinidadian to join IS, was killed in a drone strike in Syria, according to associates 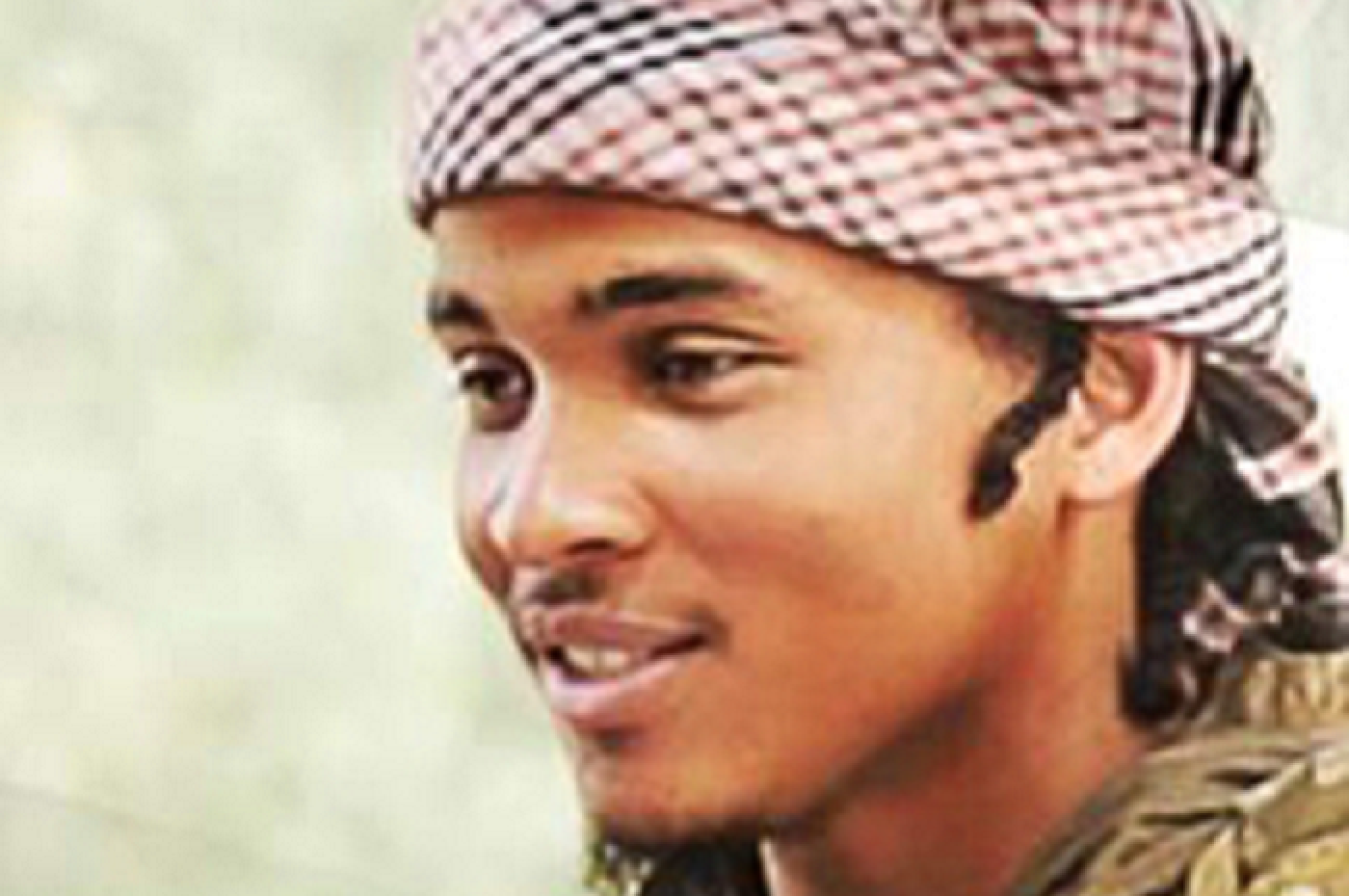 Shane Crawford, as seen in the Dabiq magazine. "How could a dead man be a threat?" his mother has asked (screengrab)

A Trinidadian fighter for the Islamic State group (IS) was designated a terrorist by the United States months after being killed by American forces in Syria, MEE has learned.

Shane Crawford was added to a list of 'Specially Designated Global Terrorists' (SDGT), by the US State Department at the end of March. A day after, Trinidad and Tobago also designated him a terrorist.

Yet his mother, Joan Crawford, told MEE that her son was hit by a US drone strike in October last year and eventually "succumbed to his injuries".

And back in February, Trinidad and Tobago’s attorney general also appeared to confirm in an interview with the New York Times that Crawford had been killed in Syria.

The confusion over Crawford’s death and designation as a terrorist has led a leading American human rights lawyer to question the Trump administration’s competence. A Muslim leader in Trinidad and Tobago says his government is trying to make an example out of Crawford.

►READ: Caribbean to 'Caliphate': The Trinidadians fighting for IS

The US government and the Trinidad and Tobago government refused to answer repeated requests from MEE about Crawford's death.

Shayana Kadidal, a human rights lawyer at the New York-based Centre for Constitutional Rights, which has challenged terrorist designations in the past, suggested that US officials may have taken the decision to sanction Crawford after he was mentioned in the New York Times.

"Is it possible the designation was a knee-jerk reaction to the New York Times story by whichever geniuses Trump has allowed to run counter-terrorism sanctions?"

Umar Abdullah, leader of the Islamic Front of Trinidad and Tobago

Kadidal also says it is possible Crawford may have already been put on a US no-fly-list which was then shared with authorities responsible for designation.

But Umar Abdullah, the leader of the Islamic Front of Trinidad and Tobago, which seeks to build cross-religious relationships in the Caribbean, slammed the move by the Americans.

Abdullah accused them of using Crawford to leverage their influence on the nation, which is the largest supplier to the US of liquified natural gas.

The designation "has nothing to do with Shane Crawford but rather he is being used as a pawn by the US administration to gain a foothold here in Trinidad and Tobago in their so-called fight against 'terrorism'", he told MEE.

"Trinidad and Tobago, as I've said in the past, is the 'flag bearer of Islam in the west' and this has no doubt also been realised by the US and so has engaged and encouraged our government to take a firmer stance on issues relating to the rise and propagation of Islam here."

Crawford left for Syria in 2013 and is thought to have been the first of more than 100 Trinidadians to leave the Caribbean nation for IS’s self-proclaimed Middle Eastern caliphate.

He rose to notoriety last summer after calling for Trinidadians sympathetic to IS to attack non-believers in the country in a lengthy interview in IS’s English-language Dabiq magazine.

"You have the ability to terrify the disbelievers in their own homes and make their streets run with their blood," he was quoted as saying.

Joan Crawford, speaking to MEE from Trinidad, said that she last attempted to contact her son in October when she left a WhatsApp voice message asking why he had threatened Trinidad. "I said - You have Christian family," she told MEE.

Shane would usually reply in a matter of days, but Joan had to wait a month before she heard anything. A text from a friend of Shane’s carried unsettling news.

"He was hit by a drone, he was in a car convoy of two or three cars. People died, but he was injured."

Joan said it has taken her several months to verify whether her son survived, but that she had received confirmation from an associate in Syria that he had died.

As a Muslim I understand and accept, but as a mother I grieve

"It feels like a part of me has gone. It’s something I know would have happened," she said.

"As a Muslim I understand and accept, but as a mother I grieve."

According to the US State Department’s website, designated terrorists are deemed to "have committed, or pose a significant risk of committing, acts of terrorism that threaten the security of US nationals or the national security, foreign policy, or economy of the United States".

Human rights lawyer Kadidal said he was "unaware of any other instance" when a person has been designated a terrorist after their death.

Kadidal also questioned why it has taken so long for authorities to designate Crawford, when his threats were published by IS last June.

"It surely takes less than nine months for the bureaucracy to put through the paperwork on a Specially Designated Global Terrorist, especially for someone seemingly admitting to active agency within an already-designated organisation," he said.

The announcement on Crawford by the office of Trinidadian attorney general, Faris al-Rawi, comes as its government attempts to push through amendments to existing anti-terrorism legislation. But Rawi had months before suggested to the New York Times that Crawford had already died.

According to a statement released by Rawi's office on 31 March, Crawford’s designation came after "several months of intelligence sharing and investigative co-operation between Trinidad and Tobago and our foreign counterparts, including the United States and United Kingdom".

But Trinidadian lawyer Farid Scoon said: "For more than two years the government has known or ought to have known that he joined ISIS."

"For more than a year, the media in Trinidad has reproduced seditious statements and open threats to the peace and good governance of Trinidad and Tobago allegedly made by Mr Crawford. The government raised no alarm, expressed no concern and took no action."

Scoon, the former lawyer of Trinidadian Kareem Ibrahim, who was designated a terrorist in Trinidad and the US, said the timing of Crawford’s designation showed that Trinidad and Tobago were "follow-fashion pawns".

"Only after the United States declared Mr Crawford a terrorist did our government promptly follow fashion and instituted proceedings in the court to label him a terrorist," he said.

"The response of the government of Trinidad and Tobago to the terrorist threat continues to be predicated on the dictates of non-national interests."

Scoon points out that while in Trinidad and Tobago "the consequence of designation is to go after assets belonging to the designated terrorist", the government has not seized assets in the past and is unlikely to do so now.

"The posthumous designation of Kareem did not result in any asset seizure and the designation of Crawford is unlikely to yield anything because the government seems to be out of touch with reality."

Kadidal also questioned the usefulness of sanctioning Crawford. "This young man didn’t seem to have significant personal assets – by all appearances, he’s no George Soros," he said.

This young man didn’t seem to have significant personal assets – by all appearances, he’s no George Soros

Crawford’s mother claims her son sold everything he had - including a vehicle, a flat-screen TV and games console - before he went to Syria.

"Shane was just 28 when he left here, what would he have accumulated in that time?" she said.

Though Shane is one of over 100 Trinidadians who have left for Syria - some of whom are thought to be Trinidadian-US dual nationals - his mother asked why he is the only one to have been designated.

"There so many other people that have left."

She then added: "How could a dead man be a threat?"