Paul calls kingdom a sponsor of terrorism, criticises its actions in Yemen and says he will push for Senate vote to block any arms sale to Riyadh US Senator Rand Paul has described Saudi Arabia as a sponsor of terrorism at a rally in Montana with Donald Trump Jr, criticising its involvement in the war in Yemen and declaring he would be pushing for a Senate vote to block any new arms sale to Riyadh.

The Trump administration is under increasing pressure from Congress to re-evaluate its relationship with Riyadh following the murder of Jamal Khashoggi, a Saudi journalist and Washington Post columnist, at the Saudi consulate in Istanbul earlier this month.

Speaking at an event on Saturday for Senate Republican candidate Matt Rosendale, Paul said: "We have to think through this idea that everything is going to be blindly for Saudi Arabia, they're involved in a war in Yemen where tens of thousands of civilians are dying."

Paul pointed out to the audience, many of whom were Trump supporters, that 15 of the 19 hijackers behind the 9/11 attacks were Saudis, according to The Hill, a US newspaper.

"Anyone remember who attacked us on 9/11?" he said. "Why do we have worldwide terrorism? The Saudis fund it."

In response to Khashoggi's killing, US Secretary of State Mike Pompeo earlier this week announced moves against 21 Saudis either to revoke their visas or make them ineligible for US visas.

Dismissing the sanctions as ineffective, Paul, a member of the Senate Foreign Relations Committee, said: "I think sanctions are a way of pretending to do something.

"If you sanction the 15 thugs that the crown prince sent to [the consulate in Istanbul], you're sanctioning 15 thugs, and they'll just get 15 more thugs.

"Saudi Arabia will see that as a way of pretending. It's a way of acting tough without being tough."

Cutting off the arms sales will make them wake up

Instead, Paul is intent on forcing a Senate vote to block arms sale to Saudi Arabia that Trump values at $110bn.

"Cutting off the arms sales will make them wake up," Paul told The Hill at the rally on Saturday.

"In fact, their air force would be grounded in two or three months if they didn’t have spare parts."

Speaking to Politico at the rally, Paul said: "We would win the vote right now. It would be a very bad vote if 60, 65, or even 70 people voted to cut the arms sales for now and the president were to veto that, that would be bad."

Pointing out he had tried to convince Trump, Paul said: "He says he doesn't want to disrupt the arm sales.

"And it's something we have an honest disagreement on. I don't think arms are jobs programmes."

Paul said their "discussions aren't really that much that back and forth".

Trump Jr made no reference to Saudi Arabia when he spoke after Paul, The Hill reported.

France and Germany's leaders said on Saturday that they wanted a "coordinated" European position for restrictions on arms sales to Saudi Arabia following the murder of Khashoggi, according to the French presidency.

On the sidelines of a summit on Syria in Istanbul, a Frrench official said the two leaders had agreed not to announce their next positions on the issue without first coordinating "at the European level".

Last month, Germany approved $470m worth of arms exports to Riyadh for 2018.

However, Merkel said on Friday that "we need to clarify the background of this horrible crime and until that, we will not supply weapons to Saudi Arabia". 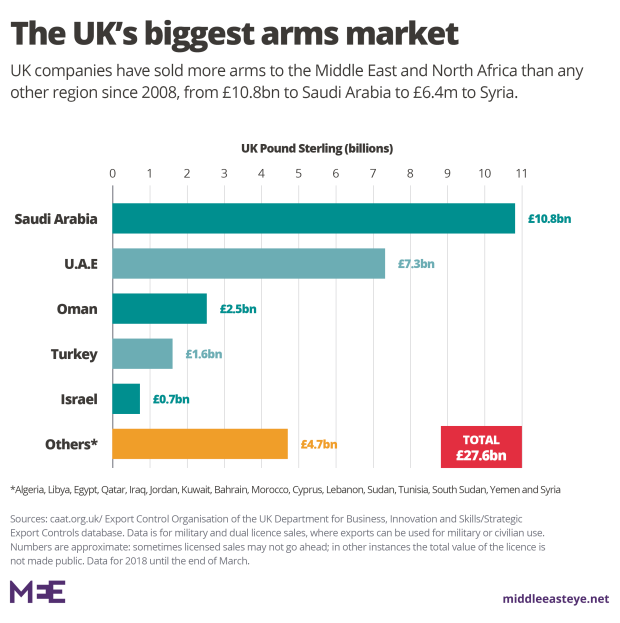 Speaking to reporters on the sidelines of the summit, Macron said: "For me, things are clear. Firstly, some of the facts have been established.

"We must fully investigate the nature of these facts, and who's responsible.

"It will depend on the facts as they are established, and the sanctions will be taken at a European level, as we usually do, so that there is true coordination," he said.

The Belgian region of Wallonia, which owns firearms manufacturer FN Herstal, has said it will examine future requests for arms export licences to its top weapons client with "the greatest circumspection" following Khashoggi's murder.

Though Austria has a substantial arms industry, it sold a meagre $1.59m of arms and ammunition to Saudi Arabia in 2017, according to EU data.

"If Austria is proposing this ban, then ask how many weapons Austria sells to Saudi Arabia," said a senior EU diplomat.

Prime Minister Theresa May of the UK, a major exporter of arms to Riyadh, said on Wednesday that the UK's weapons exports to Saudi Arabia met national and EU arms export licensing rules.

Spain, meanwhile, is trying to go ahead with the sale of 400 bombs in order to protect a Saudi contract with a shipyard in the Andalusia region that would reportedly create 5,000 jobs.