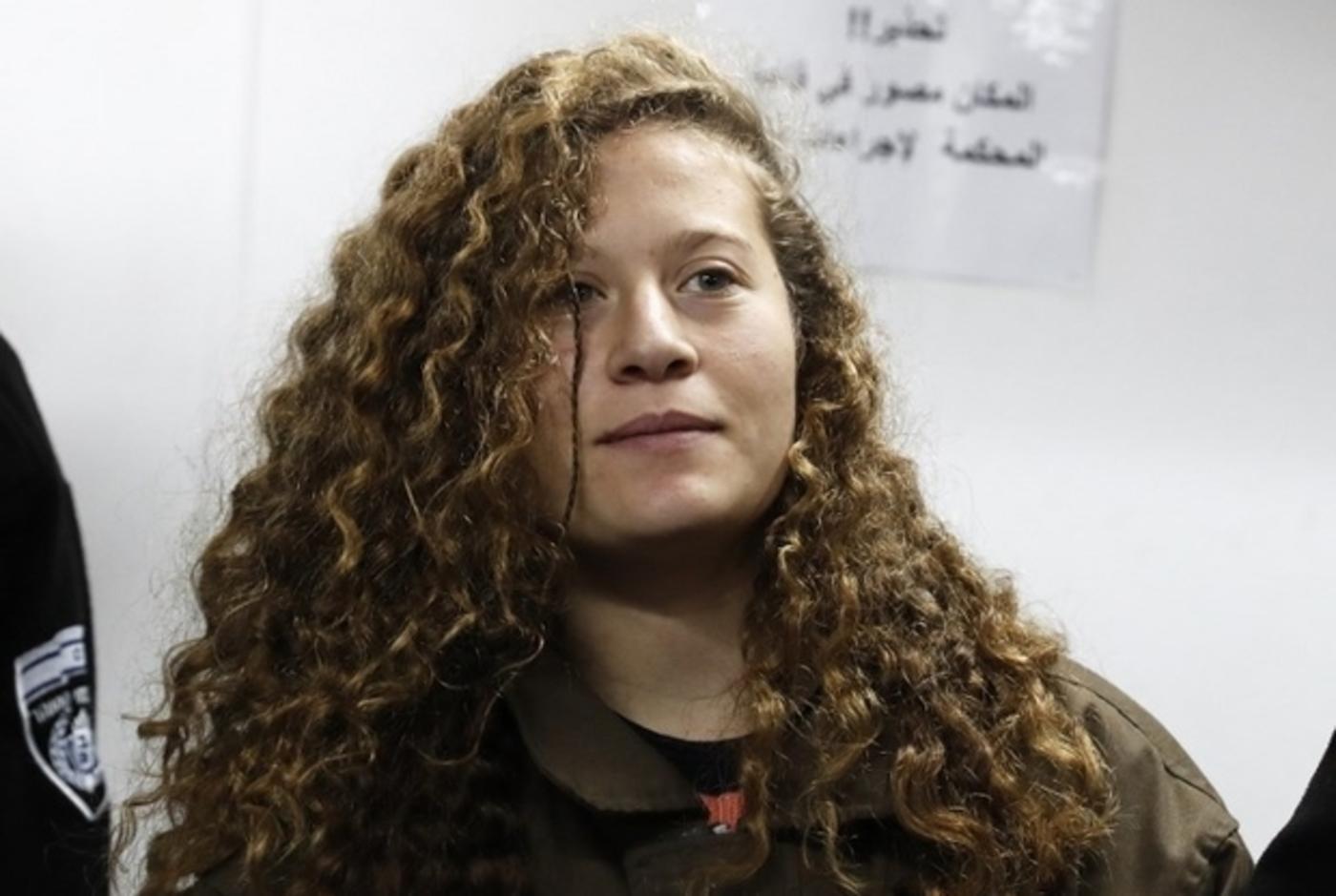 The family of Ahed Tamimi, the Palestinian teenager who garnered international attention after being detained and sentenced to eight months in prison for slapping an Israeli soldier, released on Monday footage of the 17-year-old girl being interrogated by Israeli officers in the days following the arrest.

Because she is a minor, Israeli authorities are required to hand over excerpts of footage of interrogations to Tamimi's lawyer upon request. Her family later decided to make public excerpts of the video they had been provided.

Tamimi’s lawyer, Gaby Lasky, filed a complaint with the Israeli general attorney last Monday in light of the footage showing an interrogator telling the teen she has “eyes like an angel”.

Lasky has accused the interrogators of sexual harassment amounting to a "gross violation of the law", made worse in light of Tamimi’s age.

“The video shows Ahed’s defiance and sense of confrontation through her voice, through her silence and by slapping their soldier,” Ahed’s father, Bassem Tamimi, said at a press conference in the West Bank city of Ramallah on Monday. “This defiance is the message of our new generation. The single purpose of this interrogation was to break the symbolism of defiance that she represents by trying to have her let go of her right to remain silent. She did not.”

Bassem Tamimi said his daughter was interrogated every day during the first 10 days of her detention, with the exception of the day when she was taken to court, adding that interrogations lasted up to 12 consecutive hours.

He added that she was subjected to solitary confinement, sleep deprivation for up to 34 hours, and lengthy and difficult transfers between prison and the court in the “bosta” - the Arabic term for the vans carrying prisoners.

The footage seen by Middle East Eye shows Tamimi being interrogated on 26 December, a week after her arrest, at a police station in Shaar Binyamin, an Israeli settlement in the West Bank.

Tamimi, then 16-year-old, is seen sitting on a chair in a winter coat, with one Israeli interrogator sitting behind a desk out of the camera’s range, while another, reportedly from the Aman military intelligence, sits next to her, at times scooting closer to her during the interrogation with his legs seemingly open - a stance commonly used by Israeli interrogators to intimidate women, according to several former female Palestinian prisoners who have spoken to MEE.

In breach of regulations regarding the detention of minors, Tamimi is interrogated without a lawyer or guardian present, nor is a female officer seen at any point in the room, despite their presence being mandated during the interrogation of women.

The interrogators try in turn intimidation, guilt, and bizarre attempts at establishing a rapport throughout the video, while Ahed keeps silent looking back and forth between the two men and occasionally burrowing her face into her collar, only speaking up to say: “I hold the right to remain silent.”

In one particularly jarring instance, the Aman interrogator leans towards Tamimi and shouts at her that she looks like his sister.

“My little sister is blonde and her eyes are like yours… When she goes to the beach, yeah? Like a hamburger,” he says loudly in broken Arabic, laughing. “For real, how are you in the sun? Like my sister? Red, red, red?”

The interrogators also try to induce guilt in Tamimi, telling her that she would be responsible for any harm that might befall residents of her village, Nabi Saleh, should she keep refusing to identify people in videos shown to her.

“I don’t want to have to bring those children here. Children. Please,” he adds. “You say something, maybe we don’t need to.”

“This all comes in the context of the occupation trying to target Palestinian childhood,” Tamimi said at the press conference, hailing Ahed’s commitment to staying silent as “confronting the interrogator without fear entering her heart”.

Ahed was 16 when she was arrested for slapping an Israeli soldier who would not leave her family's property in her hometown of Nabi Saleh, on the same day as Israeli forces shot her 15-year-old cousin Mohammed Tamimi in the head with a rubber-coated steel bullet.

A video of the incident went viral on Israeli social media, showing her slapping, kicking and hitting two armed Israeli soldiers. Her mother, Nariman Tamimi, was also detained and sentenced to eight months in prison for filming and sharing the aforementioned video.

Ahed’s trial gained international media coverage and human right groups, including Amnesty International, have campaigned for her to be released.

The international attention prompted the Israeli court to hold hearings on Tamimi’s case behind closed doors, ostensibly to uphold her right to privacy as a minor, despite the Palestinian teenager waiving her right, arguing that public proceedings would protect her from what she has publicly called an “illegitimate court”.

According to Defense for Children International-Palestine (DCIP), three out of four minors are subjected to physical violence during arrest or interrogation. According to Prisoners’ rights NGO Addameer, 356 Palestinian minors were detained by Israel as of March.

Reports by Human Rights Watch (HRW) and the Israeli rights groups B'Tselem and HaMoked have found that Israeli forces use unnecessary force while detaining children and "routinely" interrogate them without the presence of a parent or lawyer. Several minors reported being slapped, kicked, hit and blindfolded during their arrest or interrogation, or made to sign documents in Hebrew despite not speaking the language.