Video: A short history of the crisis in Libya

Some have predicted the collapse of the Libyan state, as diverse militias carve up different regions of the country As much of Libya is desert, there are only a few strategic locations to be fought over in the country (Alex MacDonald/MEE)
By
Alex MacDonald

For many, the current escalating violence in Libya stems from one of the more complex political situations in the Middle East.

A simple dichotomy of Islamist versus secularist or liberal versus conservative does not apply in Libya, and mapping out the numerous factions, their international and domestic connections, their ultimate goals and their vested interests has proved a challenge for even the most skilled political commentators.

Now, further complicating an already convoluted tale, UAE and Egyptian airstrikes are thought to be playing a part in hammering Islamist forces, who have now experienced strong military gains in the capital Tripoli.

Middle East Eye spoke to our reporter Steve Fox, who helped illustrate the turmoil in Libya from the overthrow of Colonel Gaddafi in 2011 up to the seizure of Tripoli's airport by Islamist forces on 23 August 2014: 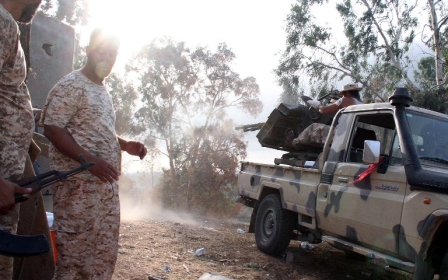