What exactly did Aboul-Fotouh say before his arrest? 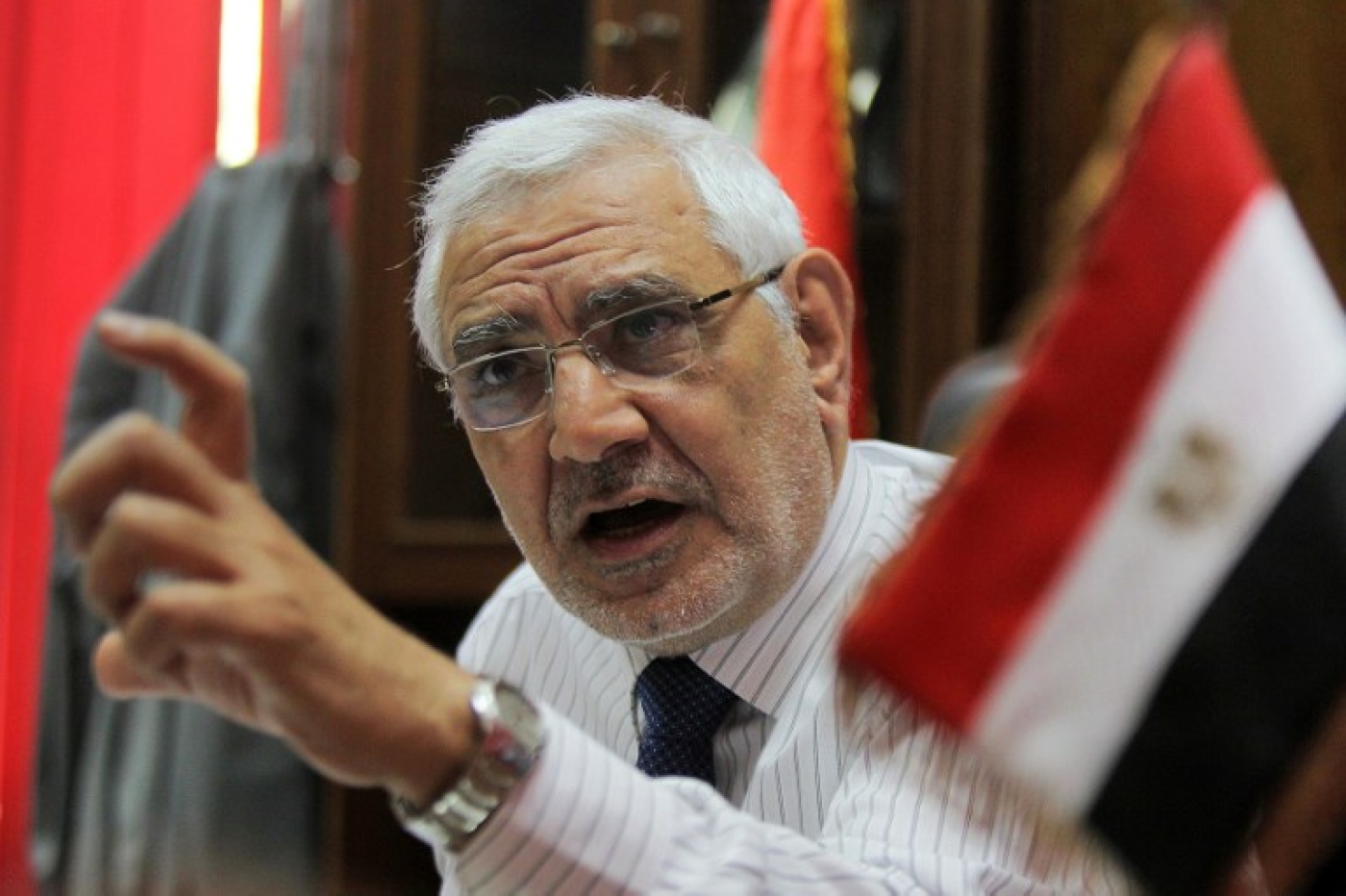 After years of placing himself on the periphery of the political process in Egypt, Abdel Moneim Aboul-Fotouh, party leader and former presidential candidate, has made headlines several times this week.

Aboul-Fotouh was arrested on Wednesday following a damning interview he gave to Al Jazeera in which he criticised Egyptian President Abdel Fattah al-Sisi and the “environment of fear” surrounding the elections due to take place at the end of March.

His son announced on his Facebook page on Thursday that the investigation into his father’s case had begun in the presence of five lawyers including former presidential candidate Khaled Ali and opposition figure Ahmed Abul Ela Madi.
Media reports on Wednesday claimed that Aboul-Fotouh’s detention was linked to his alleged ties with the outlawed Muslim Brotherhood group, but his son confirmed that no charges had so far been directed at the opposition leader.

Aboul-Fotouh’s arrest makes him the latest in a string of arrests of political figures, government critics and former officials.

An Egyptian lawyer submitted a complaint to the public prosecutor, calling for the arrest of Aboul Fotouh after the latter appeared on an Al Jazeera television show from London.

In the 11 February interview, Aboul-Fotouh condemned Sisi's crackdown on the opposition and said the upcoming presidential elections were not fair, transparent, or "democratic", especially with the absence of real opposition.

"A boycott of this mockery is a duty, in our opinion, because we don't accept for Egyptians to participate in a farce," he said of the March vote. “I didn’t nominate myself as a candidate because there are no real elections happening in the first place.”

A boycott of this mockery is a duty, in our opinion, because we don't accept for Egyptians to participate in a farce

“I had hoped for the situation to change, for the state of emergency to end, and for political freedoms to return, but we have been faced with political candidates being pressured into stepping down and their lives being threatened.

“There is no real candidate [in the Egyptian elections] apart from the current President Abdel Fattah al-Sisi. Where’s the opposition? Even the opposition they provided five minutes before the deadline for candidate registration, he’s a supporter of Sisi. So there’s no real opposition, therefore this is not a real election.”

Aboul-Fotouh also called on Sisi to involve other “political minds” in ruling Egypt so that they can provide him with their experience.

Commenting on the 2012 presidential elections which saw Muslim Brotherhood leader Mohamed Morsi become president after winning 51.7 percent of the vote in a second round of the elections, Aboul-Fotouh said:

“After the elections, I told Morsi to gather the presidential candidates [who ran against him] and got more than a million votes and create an advisory board for himself. I am proposing the same thing to Sisi.”

Aboul-Fotouh went on to say that, like Morsi, Sis has little political experience and could benefit from the advice of his countrymen who do.

“Who are the people advising Sisi? Where are the political minds assisting him in ruling the country,” he asked. “There is nothing wrong with being someone with little experience, but you must make use of your countrymen who do.”

On the orders of the country's public prosecutor, six other senior members of Aboul Fotouh's Strong Egypt Party were also detained on Wednesday, local media reported.

The arrests come days after several other opposition figures were detained last week. Most notable among them is Mohammed al-Kassas, the deputy head of Aboul-Fotouh’s Misr al-Qawia party.

Commenting on Kassas’ detention, Aboul-Fotouh said: “It’s shameful that those who oppose the elections like Mohammed al-Kassass are sitting in prison. And their houses have been taken over by authorities, preventing his family from entering their own home. This is a banana republic.”

Kassas has been held in solitary confinement in Cairo's sprawling Tora Prison complex. No trial date has been set.

‘No place for me but Egypt’

When asked whether he would return to Egypt after such an escalation of events there, he said there was no question about it.

“My place has and always will be Egypt. There is no other place on earth for me to be.”

My place has and always will be Egypt. There is no other place on earth for me to be

When asked by Middle East Eye in 2015 if he was afraid of what might happen to him following an interview with BBC Arabic and subsequent investigation launched against him, Aboul-Fotouh said: “We are now living in the shadow of a republic of fear - but I have always expressed myself since my youth, under Sadat and then Mubarak. I speak only to quiet my conscience, and to express love for my country and my people.”

One of the most prominent and vocal opposition figures, Aboul-Fotouh was one of the top presidential candidates in the country's first elections after the 2011 uprising, taking about 18 percent of the first round vote.

Egypt banned the Brotherhood in 2013 after the army, led by general-turned-president Sisi, toppled Morsi, a senior member of the group in Egypt.

Aboul-Fotouh quit the Muslim Brotherhood in 2011 to mount an independent bid for the presidency and has distanced himself from the Islamist movement since then.

In January 2017, Aboul-Fotouh called on Sisi to step down, condemning his policies and the state the country was in.

In an interview with the Anadolu news agency, Aboul-Fotouh said that Sisi has created a "republic of panic," which has failed to bring about any significant developments in Egypt.

“It is better if Sisi steps down since he has clearly failed to manage the country and steer it in the right direction," he said.