Who caused the collapse of the Turkey-PKK ceasefire? 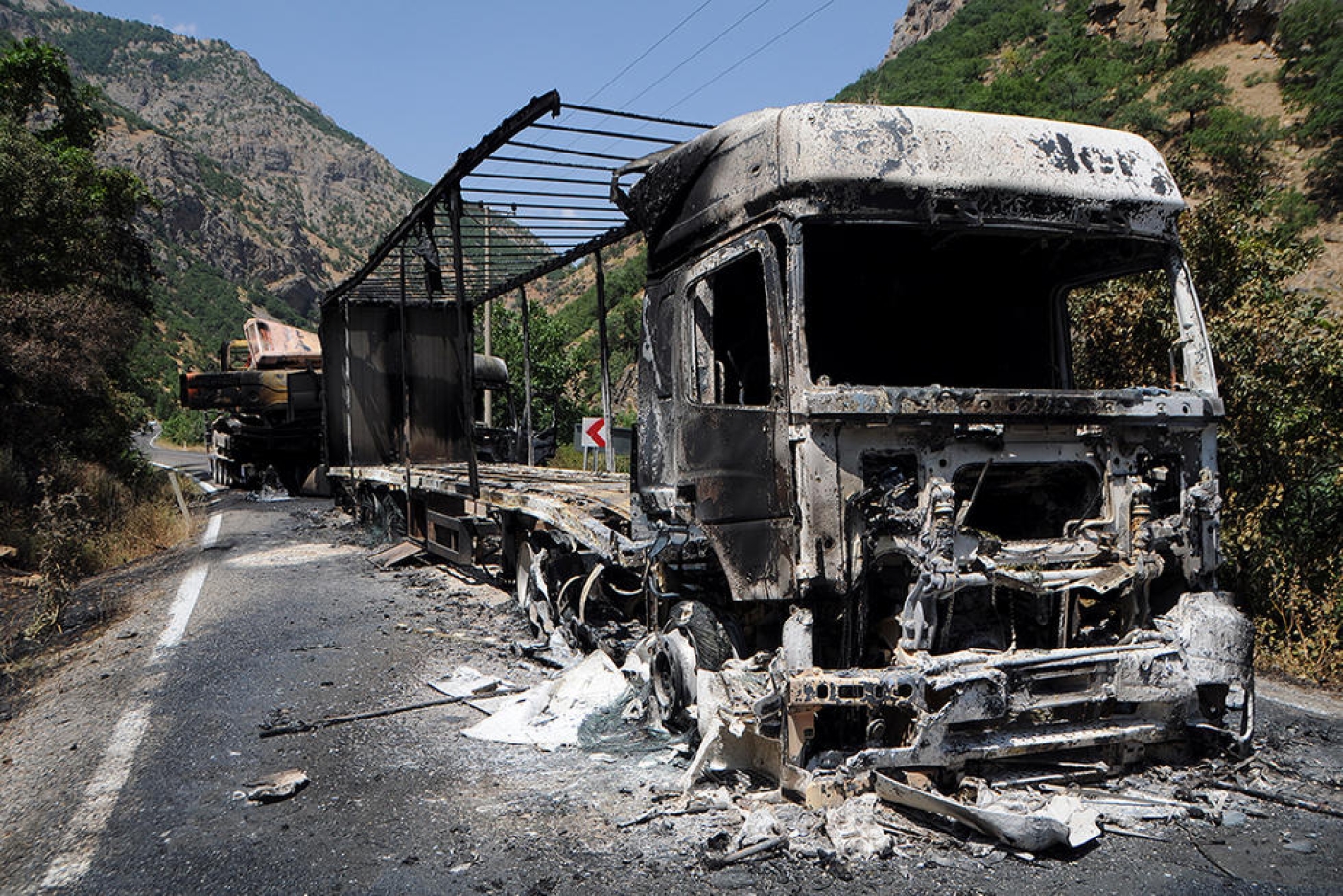 Most commentators would agree that the ceasefire between the Turkish state and the Kurdistan Workers Party (PKK) that had been established in 2013 is now thoroughly over.

Turkish jets continue to bomb PKK positions in the Qandil Mountains in northern Iraq, while on the ground in southeast Turkey - also known as Turkish Kurdistan - arrests and clashes have continued between the police and Kurdish activists.

Blame has been apportioned on both sides for the collapse of the ceasefire - supporters of the governing Justice and Development Party (AKP) have pointed the finger at the killing of two police officers by PKK militants in the city of Sanliurfa, while the PKK have held the Turkish state responsible for the bombing that killed 33 socialist activists in the border town of Suruc.

But the roots of the breakdown stretch back over a year.

Sporadic attacks between the PKK and the Turkish military had already occurred in 2014 following the crisis in Kobane. Turkish planes bombed PKK targets in October - the first major air operation since the beginning of the ceasefire - while PKK militants responded by killing three soldiers in the southeast.

Frederike Geerdink, a journalist based in the Kurdish-majority city of Diyarbakir, said that PKK concerns about a build-up in military apparatus had been a major factor in the breakdown in relations.

“The PKK has been very much bothered by the fact that the state has been going on with, ever since the ceasefire started, what they call ‘preparing for war’,” she told Middle East Eye.

On 12 July, the Koma Civaken Kurdistan (KCK) - the transnational body of which the PKK and YPG are part - declared “an end to the ceasefire” and warned that guerilla fighters would begin targeting dams in southeast Turkey.

"The Turkish state has used the ceasefire not for a democratic political solution but for preparing for a new war and strengthening its hand in this future war, by building dozens of military posts, roads and dams for the use of the military, and committing cultural genocide,” said the organisation in a statement.

“We have repeatedly warned the Turkish state to not build military posts, roads and dams for military use and stressed that these would mean the end of the ceasefire and the start of a war. Our people have stood as human shields in the face of such moves that would start this war and many of our people, including the youth, lost their lives in the attacks by the state."

Another major factor in the breakdown was the Dolmabahce Agreement controversy.

The Dolmabahce Agreement was a 10-point plan negotiated in February 2015 between the Turkish government and the HDP, with the aim of creating a longterm strategy for peace with the PKK.

In July, however, Erdogan claimed that the agreement was no longer valid, citing complicitness between the HDP and PKK.

“I do not recognize the phrase ‘Dolmabahce Agreement,’” he told reporters on 17 July.

“There is a government. So there is a political party with its grassroots [from the PKK]. If there is a step to take for the future of our country, this should be made in parliament. There cannot be an agreement with a political party that is being supported by a terrorist organisation.”

Nigar Goksel, Turkey and Cyprus analyst for the International Crisis Group, told Middle East Eye that a lack of trust between the two sides had hampered efforts for peace early on.

"The overarching issue was deep distrust in Ankara that once the Kurdish militants withdrew, the other side of the deal, the sort of issues that the Turkish state was expected to follow through, would fall through," she said.

"The rhetoric of the president also solidified that view, claiming that everything that needed to be done to meet the Kurdish demands had been done."

The operational structure of the PKK has caused confusion as well. Though the original organisation, known as the PKK, was set up in 1978 - along with the People's Defence Force (HPG) its armed with - since then numerous other institutions have been set up, working with the PKK with various levels of autonomy.

The KCK is the largest organisation, encompassing various bodies across the historical Kurdistan region, including the Democratic Union Party (PYD) in Syria and Party of Free Life of Kurdistan (PJAK) in Iran.

Ostensibly, decisions taken by the Executive Council of the KCK are binding and so a declaration by the body to end the ceasefire should be definitive.

But the attack in Sanliurfa that was cited as the PKK's breaking of the ceasefire was most likely carried out by a local cell of the PKK without orders from the central body - though after the attack, the KCK released a statement in support.

"The KCK approves of it because they say, '32 people died - should we not act on that?'" said Geerdink. "So local cells take their own initiatives, but its the KCK that decides the ceasefire is over."

The role of PKK leader Abdullah Ocalan has also been a major factor. Ocalan's status as the figurehead of the Kurdish movement has given him a lot of influence over the PKK's direction.

But since April, Ocalan has made no speeches in public - in June, HDP Deputy Sirri Sureyya Onder said that "an unannounced isolation" of Ocalan had begun and that he was not being allowed visitors or any platform for talking.

In response, the KCK announced that any decision to disarm would henceforth be taken by it, rather than the HDP or Ocalan as he was “unable to make such a call in his current conditions” though it added, however, that it was “not disregarding leader [Ocalan] or HDP, but on the contrary supporting the different roles of political actors in Kurdish politics."

"It is almost impossible for any outsider observer to grasp the power balance between different actors of the Kurdish movement," Turkish journalist Ceren Kenar told MEE at the time. "Ocalan, KCK, and HDP seem to be three different players in the game, yet it is really almost impossible to know how these actors' approaches are intertwined, differ or agree on different issues."
"That being said, I think KCK's statement is very significant and implies that the armed wing of the Kurdish movement is emphasising that their importance and role in the play."
Around the same time, the process for the parliamentary elections began, with the HDP poised to make gains in the southeast where the AKP had previously enjoyed wide Kurdish support.
Though the HDP proclaimed a principled committment to nonviolence, their offices and activists were frequently the target of attacks from mobs and improvised explosives.
The Human Rights Association (IHD), an NGO that frequently deals with Kurdish issues, published a report in May claiming that there had been 114 against HDP offices, compared with seven against AKP.
Turkish ultra-nationalists and members of the Islamic State group and the Kurdish Islamist group Huda Par were often blamed for the attacks - but HDP activists levelled responsibility at the AKP government, claiming a rise in nationalistic rhetoric and willingness to ignore attacks by rebel groups had facilitated them.
“[Some] powers supported by the government attempts to prevent our party’s development and election campaign. The political responsibility of these attacks is on President Erdogan, the prime minister, and other AKP officials,” read a statement released by the HDP following a twin bomb attack in Adana and Mersin in May.
When the Suruc attack came, KCK spokespeople were unequivocal.
“It is obvious that responsibility for this massacre is of the Turkish state that unrestrainedly commits massacres on the basis of animosity towards Kurds," said a statement released by the KCK following the attack.
"Massacres have been gradually normalised in Turkey under the rule of a mindset and party aiming to suppress the Kurdish people and Kurdish Freedom Movement. This is a truth proved by the attitude and reaction manifested by the AKP government in the face of the attacks before and after the 7 June election.”
Opinion among Kurdish activists since the Kobane crisis has maintained that the AKP supports IS and al-Qaeda in Syria and was complicit in allow the slaughter of Kurds in northern Syria.
"When you look at July, 18 security officials were killed by the PKK, 14 of them after Suruc," said Goksel.
"While Suruc was a turning point on the PKK side, it was months in the making. Leaders of the Kurdish movement had long been accusing the Turkish government of turning a blind eye to IS attacks against representatives of the Kurdish nationalist movement. So while Suruc may have been a tipping point, it wasn’t a new phenomenon."
“An unannounced isolation of İmrali has entered into force. - See more at: http://www.middleeasteye.net/news/pkk-body-states-decision-lay-down-arms-cant-be-made-hdp-or-ocalan-1149270841#sthash.GOARt02V.dpuf 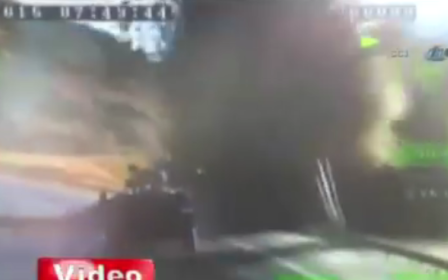 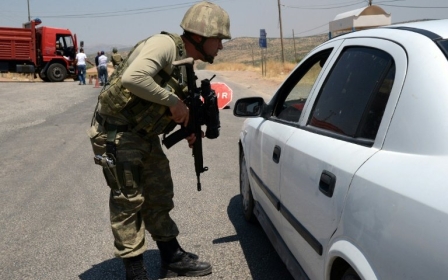 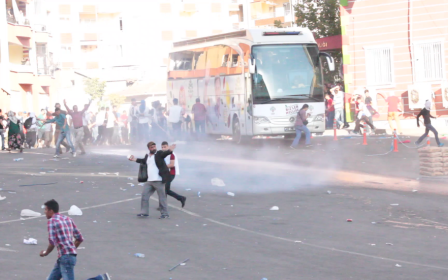