Will the Fatah-Hamas deal last?

With Gaza 'on a knife-edge', MEE looks at stumbling-blocks of previous unity deals between Fatah and Hamas and asks: will this one last? Hamas and Fatah’s “breakthrough” in talks to form a unity government on Thursday heralds a new raft of promises from each side aimed at healing their historic rift. As part of the deal, Hamas agreed to give full control of the running of the Gaza Strip to the coming unity government. The announcement may come as a surprise to some, after pessimistic statements from Hamas officials who last week said they were looking for “alternatives” to the “failed” unity government. The agreement was reached even after reports that Palestinian President Mahmoud Abbas, who leads Fatah, blocked Hamas-backed Palestinian attempts to join the ICC, which would have allowed them to pursue Israel over alleged war crimes in the Gaza Strip and the West Bank.

Now, as Hamas and Fatah leaders in Cairo celebrate the first major progress towards Palestinian unity since the shattering 51-day war, MEE looks at some of the major sticking points between the players, what they have publicly agreed upon and how the deal could impact on the ongoing peace talks with Israel.

What were the sticking points between Fatah and Hamas?

The two agreed a historic deal in April to end a seven-year rift and form a united government. However, the reconciliation faced challenges from within and without from the off, and the deal failed to tackle a number of key issues:

Control of the borders

Control of the Rafah border crossing has long been a sticking point for negotiations between Fatah and Hamas, who have been at loggerheads since Hamas seized control of the Gaza Strip in a bloody takeover just before the announcement of the results of a 2006 election, which they had won. With the Gaza Strip under Hamas control, Israel imposed a chokehold blockade on the enclave, preventing all but the most basic needs from entering the Strip. In 2013, after six years of the blockade, Fatah rejected suggestions that it take over joint control of Gaza’s Rafah border crossing with Egypt. Hamas had hoped that the move could lessen the stranglehold of the blockade, since authorities would allow a greater range of materials to pass through a Fatah-controlled crossing. Last year, a Fatah spokesperson said that sending Palestinian Presidential Guards from the West Bank to help control the Rafah crossing would make them “subject to Hamas blackmail.”

Hamas accuses Fatah of withholding the salaries of tens of thousands of its employees in the Gaza Strip. The Gaza-based group has demanded that Fatah place its workers on the payroll, but Palestinian Prime Minister Rami Hamdallah has refused to recognise Hamas employees, saying they were appointed by an illegitimate government. 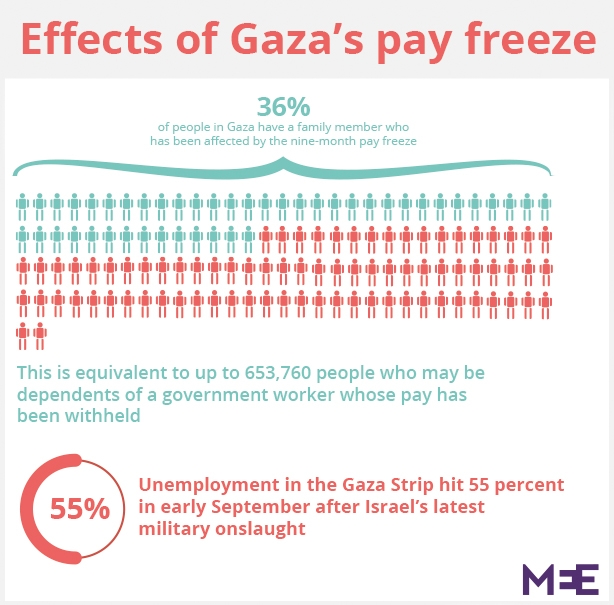 Just hours before the agreement was announced, Hamas made it clear that employee salaries remained a key issue. Hamas spokesperson Sami Abu Zuhri slammed the West Bank government in a Facebook, holding them responsible for an ongoing strike by hospital cleaners in the Gaza Strip:

"The Hamas movement calls on Hamdallah’s government to take responsibility for the catastrophic health situation in the Gaza Strip because of paralysis in cleaning services. This is caused by the government’s neglect of the demands of sanitation workers in Gaza’s hospitals. Hamas warns of the danger that any continuation of this disastrous situation may pose to the lives of patients in Gaza’s hospitals."

In addition to ongoing problems over communication and representation, the previous government never solved the difficulties posed by establishing a Prisoners’ Affairs Ministry for a unified state. In a plan opposed by Hamas just before the April deal was announced, Abbas proposed dismantling the Prisoners’ Affairs Ministry, which contributes towards the upkeep of the families of Palestinian prisoners held by Israeli authorities. A last-minute deal saw Hamas agree that the ministry would be run by West Bank-based Prime Minister Rami Hamdallah. However, just days after the deal was signed, Hamdallah announced that he would turn the ministry into an independent body affiliated to the West Bank Palestine Liberation Organisation, in a decision slammed as “blatant meddling” by Hamas.

What solutions does this agreement offer?

The agreement, a full text of which can be found in Arabic here, does not explicitly mention the issue of who will control the borders. However, Hamas official Musa Abu Marzouq told reporters after a meeting in Cairo that the UN would be tasked with mediating between Israel and the unity government to agree on how Gaza’s borders will be run. Egyptian sources told the Palestinian news agency Maan that the agreement will see Palestinian Authority take over the administration of the Rafah border crossing as well as the adjacent Philadelphia corridor along the border Egypt.

Though details have not yet emerged as to how the Rafah border crossing would be administrated under such an agreement, a Fatah source told Anadolu Agency on Thursday of an arrangement to send 3,000 personnel from the Palestinian Authority security forces to join the soldiers in Gaza.

The partial merging of Gaza’s armed forces with personnel from the West Bank, if it is implemented, could prove controversial.

During the recent war in Gaza, when the West Bank regularly saw large numbers of protests in solidarity with the embattled coastal strip, Palestinian Authority forces came under fierce criticism over their role in preventing protestors from advancing towards Israeli army checkpoints.

Chris Doyle, director of the Council for Arab-British Understanding, told MEE that the administration of borders and the merging of the security forces will be sink-or-swim for the popularity of the unity deal on the ground in Gaza.

“People in Gaza will judge the deal by whether it actually delivers. Will they get an increased supply of essentials so they can rebuild their homes, their schools, their hospitals, their medical centres? Will the Rafah border crossing be more open than it has been for the last 12 months?

On the security co-operation between Palestinian Authority forces sent from the West Bank and the personnel already in Gaza, Doyle explained that establishing calm is essential to the deal’s success. A key question is whether “they maintain some degree of public order within the Gaza Strip. What people don’t want to see is fighting breaking out between rival Fatah and Hamas groups. The last thing Palestinians in Gaza need is additional tension, or for any group to provide an excuse for Israeli armed forces to take further action in Gaza.”

Musa Abu Marzouq, head of Hamas’s delegation in Cairo, said on Thursday that “some” payments will be made to government officials in Gaza. However, the question of full salary payments will be left to future negotiations.

The text of the “comprehensive” agreement gives few details as to the make-up of the future unity government. However, it stipulates that elections should be held within six months, as did the previous agreement announced in April 2014. On the issue of the Prisoners’ Affairs Ministry, which was such a stumbling-block in the implementation of the previous agreement, officials from both Hamas and Fatah were silent on Thursday.

Thursday’s announcement is the second such agreement on a unity government to be reached in under a year, and there are already signs of disunity within the warring camps.

Less than an hour after publicly celebrating the deal, Hamas spokesperson Izzat al-Risheq shared the doubts of Palestinians regarding the agreement and its implementation.

“We want action not words," he wrote on his Facebook page. “This is the most frequent comment I have heard after the agreement between Hamas and Fatah. These people are right: they have already seen so many agreements, and not a thing has changed.”

Chris Doyle told MEE that there are also divisions within Fatah.

“Even if there is agreement at leadership level, there remain plenty of other parties within Hamas and Fatah, as well as the Israeli authorities, who will oppose this.

“It’s one thing to sign up to a deal and for leaders to say that this will happen. It’s quite another to implement it on the ground. There is still precious little trust between [Fatah and Hamas].”

Sam Bahour, a West Bank-based businessman and political analyst, agrees, citing the weakness of both Fatah and Hamas.

“In any real political system both of these failed parties would be laughed out of office.”

While Doyle warns that the deal will be “tough to implement” on the ground, he says that unity is essential after the 51-day war that caused huge loss of life and damage to basic infrastructure in the Gaza Strip.

“There is really only one way forward for Palestinians to try to resolve the crisis in Gaza. The level of destruction that was meted out over that 51-day Israeli operation means that they need to engage in a very serious reconstruction programme. They need to get this unity agreement in place so they can open up the borders and get building materials in. The domestic pressure within Gaza is utterly huge; people are desperate. Ultimately, there is no other option than a unified approach.”

Though the deal will face challenges from within, according to Doyle, it is Israel that poses the real threat to Palestinian unity.

“We can expect a pretty substantive Israeli response to this deal.

“Given the Israeli opposition to a unity agreement, one cannot rule out escalation leading to a further Israeli assault on Gaza. It’s not necessarily what the Israeli Prime Minister wants to happen, but it can’t be ruled out.”

Bahour warns that in the likely power vacuum caused by a weak unity government, Palestinians will be hard pushed to resist expansionist Israeli policies.

“The only constant now is that Israel will continue to bulldoze itself straight into a one state reality.”

According to Doyle, the international community must step in immediately to welcome the unity deal between Fatah and Hamas, preventing Israel from repeating its response to the previous reconciliation announced in April.

“The original Israeli reponse to this agreement was to go through the West Bank like a hurricane and arrest hundreds of Palestinians, purportedly because of the killing of three Israeli teenagers but really to finish off the unity deal.”

If Thursday’s agreement does not receive international support, Doyle cautions, we could see a similar response in the coming weeks.