A peace activist attempted to put a Saudi general under citizen's arrest in London on Thursday for his part in the war in Yemen.

Major General Ahmad al-Asiri is an adviser in the Saudi defence ministry, and a spokesman for the now two-year-long war against the Houthi movement in Yemen, which has claimed at least 10,000 lives and devastated the country. He is in London to speak at the European Council on Foreign Relations, a think tank.

A peace activist in London attempted to put a Saudi general under citizen's arrest for his part in the war in Yemen pic.twitter.com/BbeNrnDqn7

The UN has warned of a catastrophe in Yemen, where some 18 million people need food assistance and face starvation.

Sam Walton, who attempted the citizen's arrest - which is an arrest carried out by a regular citizen and not a law-enforcement official - said that Asiri shouldn’t be welcomed in the UK.

“Asiri represents a regime that has killed thousands in Yemen and shown a total contempt for international law.

“Asiri shouldn’t be welcomed and treated like a dignitary, he should be arrested and investigated for war crimes.”

‘Asiri shouldn’t be welcomed and treated like a dignitary’

The Saudi major general arrived at what was billed as a private roundtable with egg stains on his suit. He told the seminar he was delayed by “people who did not differentiate between protesting and attacking”.

The spokesman for the Saudi-led coalition in Yemen acknowledged that only a political solution would solve the brutal two-year war, but insisted that what he called a “ temporary” solution would not be enough.

He claimed the Houthis had fired over 40 Scud missiles at Saudi cities and that the kingdom had the right to protect its borders.

He said that Saudi Arabia has learned the lessons of Western intervention in Libya, when the NATO-led force dismantled the structure of the state and left a vacuum to be filled by militias. Riyadh would not let this happen in Yemen, he said.

Great support from passers-by at protest against Saudi General Ahmed Al-Assiri. 'Whys he not been arrested by the police?' asks one.

He accused the Houthis of commandeering international aid and reselling it on the black market, and denied there were serious problems of food and water scarcity in areas controlled by the rump government of President Abdrabbuh Mansour Hadi, which is now installed in the southern city of Aden.

He also denied claims by Human Rights Watch that a boat carrying 145 Somali immigrants had been attacked by a coalition helicopter off the coast of Hodeida, killing at least 32 abroad last week.

After the talk, the Saudi general was led out of a side door under the protection of officers.

Last November, Asiri claimed that Saudi forces had not used cluster bombs - only for the Saudi-led coalition to later admit they had been used in Yemen.

Since the war in Yemen began, the UK has licensed $4.1bn worth of arms to the Saudi government, according to the Campaign Against Arms Trade.

Andrew Smith, of CAAT, said that Asiri “is a mouthpiece for a devastating bombing campaign that has killed thousands of civilians and destroyed vital infrastructure,” and as such “should not be getting invited to address parliamentarians and think tanks to whitewash the atrocities that are taking place.”

“The voices that need to be heard are those of Yemeni people who are victims of a humanitarian catastrophe - not those that are inflicting it. If the UK is to play a positive role in bringing peace then it must end its complicity and end the arms sales." 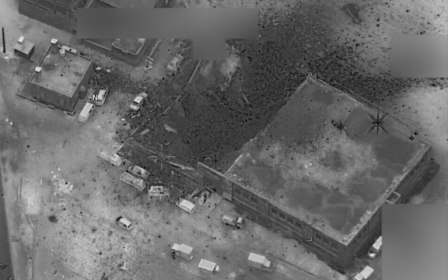 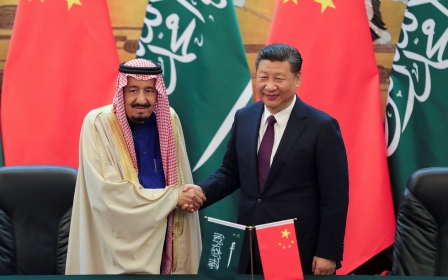