Any agreement that does not 'satisfy the aspirations of the southern people' will not lead to peace, Ahmed Omar bin Farid says 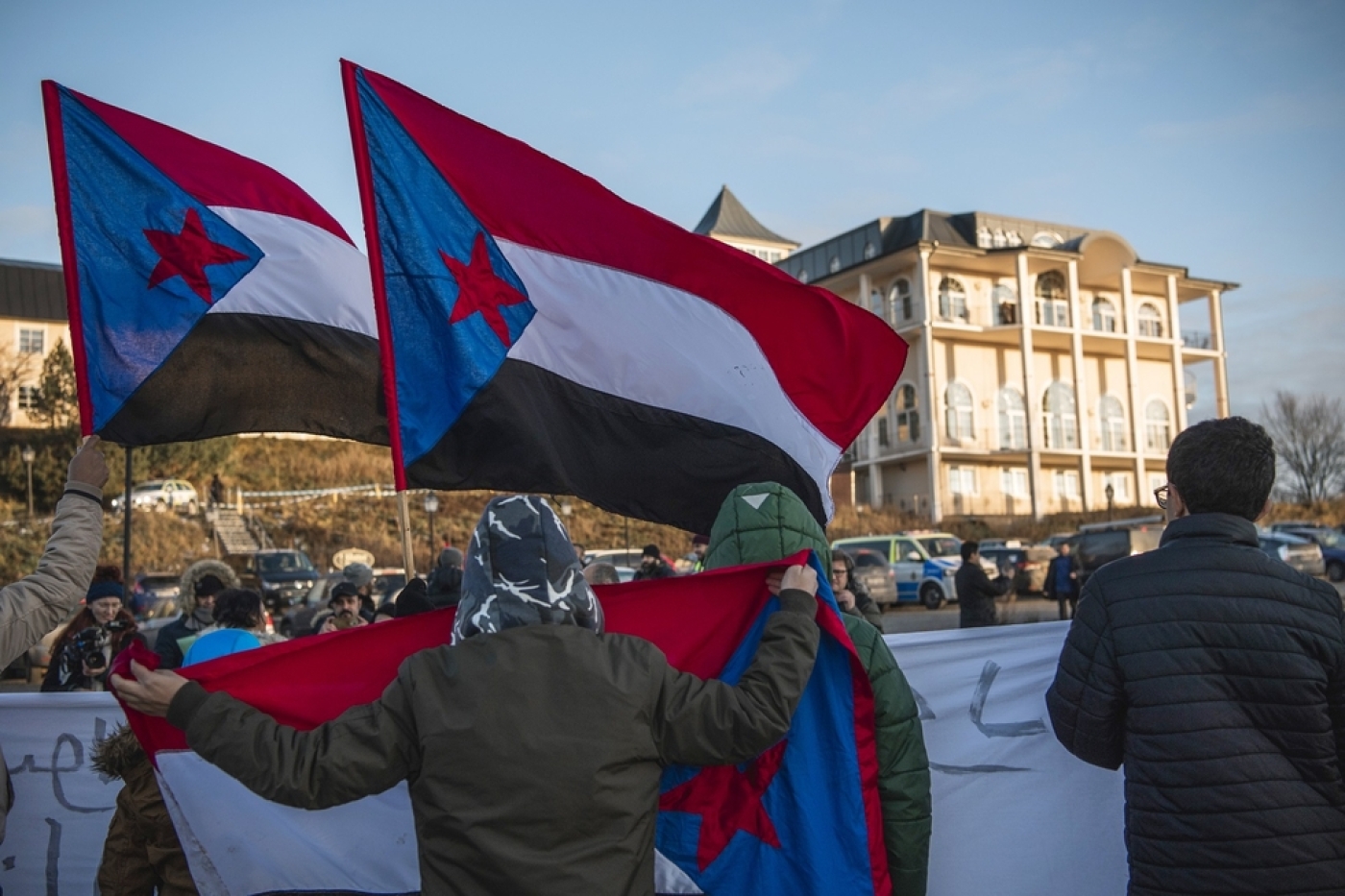 UNITED NATIONS – Despite recent progress at peace talks in Sweden, the war in Yemen will only end when people in the country's south are given a seat at the negotiating table and granted a referendum on independence, a southern leader told Middle East Eye.

Ahmed Omar bin Farid, the Brussels-based envoy for the Southern Transitional Council (STC), warned that any headway being made between the Houthis and Yemen's internationally recognised government would be short-lived without credible input from the restive south.

The STC was excluded from this week’s talks in Rimbo, Sweden, as the United Nations pushed for deals between the Houthis and the Saudi Arabia-backed government of President Abd Rabbu Mansour Hadi on prisoner swaps and the Hodeidah port.

"Any peace that does not satisfy the aspirations of the southern people will lead to unrest," Farid told MEE.

Southern forces were key in bringing the Houthis to the negotiating table, Farid said, as they formed the bulk of a United Arab Emirates-led ground force that has been fighting to capture Yemen’s main port city, Hodeidah, from the rebels.

But the negotiations did not tackle deep-rooted grievances among residents of the country's south, nor did they address demands to restore the independent state of South Yemen, which united with northern Yemen in 1990.

And outside the castle where UN peace envoy Martin Griffiths brought the two sides together this week, southerners waved the flag of former South Yemen, emblazoned with a bright blue triangle and red star, and chanted for self-rule. Griffiths’ office did not respond to MEE’s request for comment.

Farid, who co-launched the breakaway campaign al-Hirak in 2007 amid complaints of exploitation at the hands of Yemen's central government in Sanaa, said southern forces now control much of south Yemen and that the local population there supports independence.

"There are thousands of military forces now in the south. We need to listen to the voice of the people," Farid told MEE in a telephone interview, after pressing his case with European Union officials in Belgium.

On Thursday, the Houthis and the Yemeni government agreed to halt fighting in Hodeidah, the first major breakthrough for UN-led peace efforts in five years of conflict. A framework for future political negotiations is expected to be discussed at the end of January.

Western nations, some of which supply arms and intelligence to the Saudi-led coalition that launched a military campaign in Yemen in 2015, had pressed the sides for a truce in a war that has claimed tens of thousands of lives and pushed millions towards famine.

While southern grievances are legitimate, Griffiths made the right call by focusing on the Houthi-government conflict, said Jerry Feierstein, Washington’s ambassador to Yemen from 2010 to 2013.

"The issue of the south has to be addressed, but if you do it too soon, before the country is ready, I’m worried that the whole thing will just collapse," Feierstein, now a scholar at the Middle East Institute think-tank, told MEE.

The UN has three priorities in Yemen: a broader ceasefire, tackling famine and propping up the economy so that families can buy food and fuel, said Feierstein.

Only then should people expect a government in Sanaa to deliver basic services, and then set up a transitional arrangement to balance the aspirations of southerners, Houthis, minority groups and others, he said.

The issue of the south has to be addressed, but if you do it too soon, before the country is ready, I’m worried that the whole thing will just collapse

Abdy Yeganeh, from the non-profit group Independent Diplomat, which advises the STC, disagreed.

Demands for southern independence have grown louder this past year and failing to answer them now could derail any peace process, he said.

"World powers are understandably desperate to end the war, and a binary agreement between the Houthis and Hadi’s government looks like the simplest route to that," Yeganeh, a former British foreign service analyst, told MEE.

"Having the STC at the table would further undermine Hadi’s legitimacy. But it’s short-term thinking that doesn’t answer the southern question, which cannot be ignored if we're serious about ending this conflict."

South Yemen was a Soviet-backed, independent socialist state. After the collapse of the Soviet Union, the south agreed to unification under northern leader Ali Abdullah Saleh in 1990.

Southerners then grew disillusioned with the allocation of oil wealth and land to other parts of the country under Saleh. Yemen produced about 500,000 oil barrels per day before the war, with more than half of it coming from the southern Hadramout region.

In 1994, central government forces put down a separatist rebellion that declared independence in the south.

US Senate resolution on Yemen passes, but long road lies ahead
Read More »

Farid and other disgruntled southerners launched the al-Hirak movement in 2007 and their grievances persisted under current president Hadi, who is himself a southerner.

Al-Hirak members and others formed the STC a decade later, in 2017. The organisation counts a 24-person leadership council and a 300-strong assembly of the eight governorates of southern and eastern Yemen, up to the border with Oman. It also has representatives in Washington, Berlin and Brussels.

According to STC officials, between 80 and 90 percent of the southern population wants independence. Such levels of support may be exaggerated, but many analysts say the majority of southerners would likely vote to break off from the rest of the country.

The STC is led by Aidaroos al-Zubaidi, with headquarters in Aden and luxurious offices in the Emirati capital, Abu Dhabi. Zubaidi also leads the Southern Resistance Movement, which has 20,000 men providing the bulk of a UAE-led ground force in Hodeidah.

Zubaidi’s separatist force, built with UAE support, totals more than 50,000 fighters. They helped drive the Houthis from Aden and al-Qaeda militants from the southern port of Mukalla in 2015, often acting in a shaky alliance with Hadi’s troops.

For his part, Hadi was driven out of the capital in 2014 and now heads a government based in Aden, though he operates mostly from Riyadh. Once aligned, Hadi and Zubaidi fell out, but both remain key components of the Saudi-led anti-Houthi coalition.

Sawsan al-Refaei, a women’s rights campaigner from northern Yemen, praised peacemaking efforts in Sweden this week, but said the response should be tempered, as "some Yemenis feel they triumphed and others feel left behind".

"The handshake in Sweden [means] nothing if some powerful groups on the ground rightfully destabilise the agreement, claiming they were not part of it, or accountable to it," al-Refaei told MEE from Ottawa, Canada.

"Now that Griffiths is not under so much pressure, he could go to southerners, women’s groups, civil society, tribes, armed groups and ask for their support at a critical point. Engage them, and hold them accountable."

Previous rounds of talks about breaking up Yemen highlighted the wildly divergent views held by people across the country, he told MEE.

"There’s no reason to believe that if Yemen were to divide again, it would only split into two pieces. Among southerners, there are very different views about the way forward. It could divide into three, four or five - and that’s not good for anybody."