Thousands of poorly trained Yemenis have been hired to fight Houthis advancing on Saudi Arabia, as Saudi troops sit miles behind the front 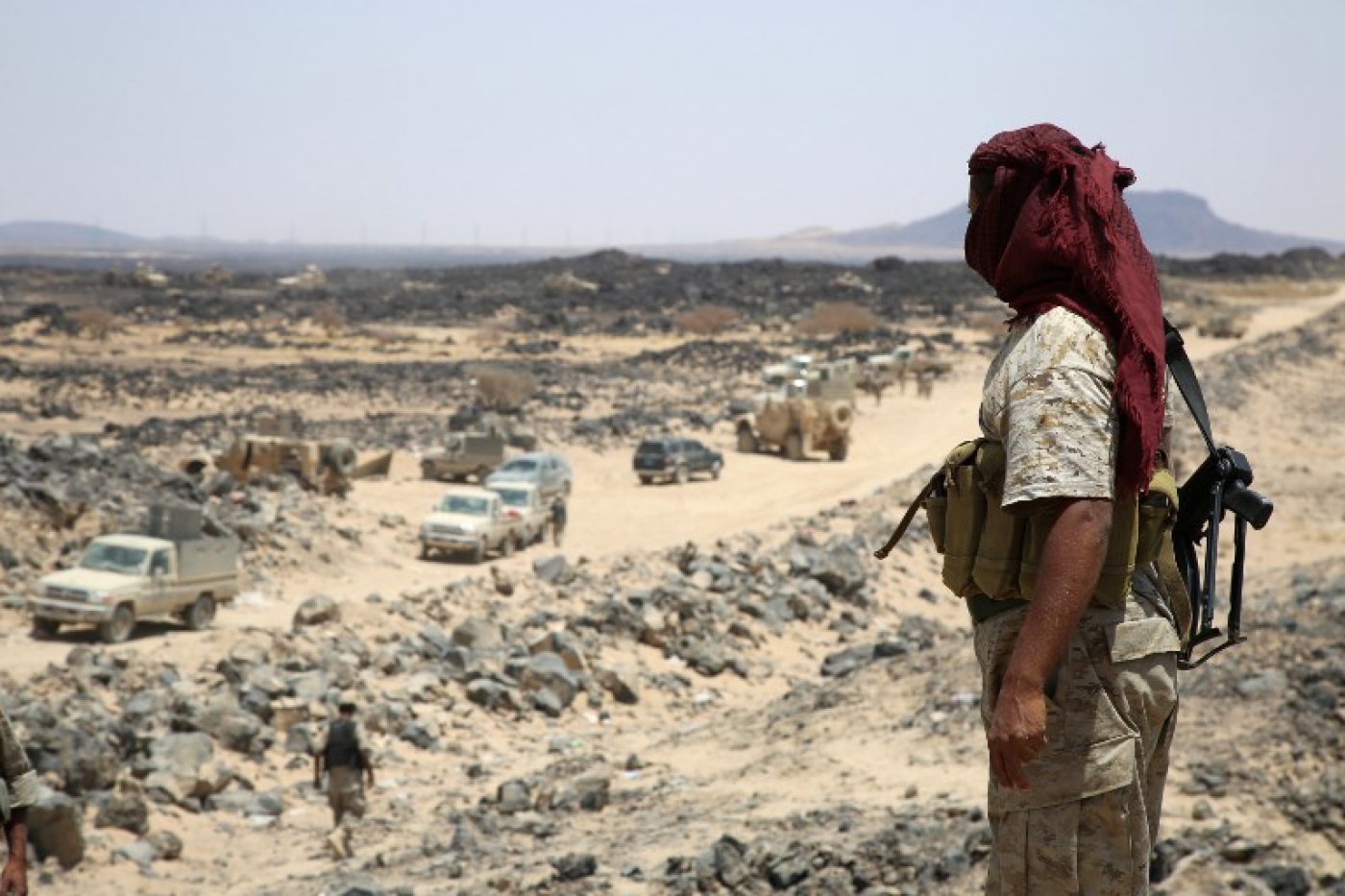 Thousands of desperate Yemenis are being recruited by Saudi Arabia to defend its borders against Houthi rebels, Middle East Eye can reveal, as Saudi forces stay far from the fighting, orchestrating air attacks on Yemeni targets.

Returned mercenaries told MEE how they were given only a few weeks of training, deployed into Saudi-funded border defence regiments staffed almost exclusively by Yemenis, and paid an average of $800 a month to fight far superior Houthi forces.

When I arrived on the battlefield, I only found Yemenis fighting on the front lines

The practice lays bare the Saudi government's inability, or unwillingness, to put its citizens in the firing line in a war in which it has contributed to the worst humanitarian crisis in the Middle East, with millions of Yemenis starving and hundreds of thousands caught in the world's worst cholera crisis.

Ahmed, 29, who fought on the Najran border as a mercenary, told Middle East Eye how after two years of war, he had the choice of either fighting for the Saudis or living in penury in his village in Taiz province.

But two months' salary amounted to a marriage dowry, he said. "I knew it would be more dangerous [to fight on the borders] than to join local battles, but fighting on the Saudi borders was the best chance I had to reach my dreams," Ahmed told MEE. "It was better to die than to live a burden on my father."

After receiving only a few weeks training in Marib - the only military experience he and others like him received - Ahmed was shipped to the Najran front on the Saudi border to face Houthi rebels backed by remnants of the professional Yemeni army.

No Saudis in sight

Before arriving at the Saudi front lines by the end of September 2016, Ahmed had thought he would be fighting shoulder to shoulder with Saudi forces - he had regularly heard in the news that Saudi troops were mowing down the Houthis by the dozen.

Still, when Ahmed arrived at Najran, Saudi troops were nowhere in sight. "I only found Yemenis fighting on the front lines," said Ahmed.

Tawfeeq, another Yemeni fighter recruited by the Saudis, shot himself in the leg to escape the front.

They want to live while we Yemenis die

He told Middle East Eye that he had never seen Saudi soldiers on the Saudi border, and felt betrayed by a country that was using poorly trained Yemenis to as cannon fodder to protect its own interests.

"Saudi Arabia wants to fight the Houthis using Yemeni forces while the Saudis avoid the fight on their own front lines. They [the Saudis] want to live while we Yemenis die," Tawfeeq told MEE.

"I would rather lose my leg than my life," he said, adding that he would advise other Yemenis it was better to starve at home than to die fighting for a foreign power.

Ahmed separately reiterated Tawfeeq's story. "I don't know how many Yemeni fighters are on the Saudi borders, but there were more than 300 fighters in my group alone."

"When I asked about the Saudi forces, they [Yemeni fighters] told me they were several kilometres behind, firing missiles at the Houthis without actually fighting on the frontlines," said Ahmed.

"At that point, I started to think about returning to Yemen."

From 'popular resistance' to killing for money

Saudi Arabia has been battling the Houthis and their allies, former members of Yemen's security forces linked to ex-president Ali Abdullah Saleh, since they began retaliatory attacks against the kingdom more than two years ago.

Over the past two years, Saudi Arabia and a mostly Gulf Arab military coalition have launched thousands of air strikes and used a small number of ground troops on the Yemeni-Saudi borders to try to dislodge the Houthis and re-establish the authority of President Abd Rabbuh Mansour Hadi, who was forced to flee the country when the Houthis advanced on the key port city of Aden.

When the war came to Yemen, many people decided to fight with the Saudi-backed Popular Resistance Committees in their home towns and villages or to join the Iran-backed Houthi militias.

Although Yemenis regularly leave the front lines on the Saudi borders, thousands of others continue to join the fight, including many Yemeni civil servants who have not received salaries in months.

A Saudi-led war fought by foreigners

Most regular troops employed by the Saudi coalition in Yemen are also foreigners, according to reports.

In 2015, officials in Yemen's government claimed that Egypt had sent ground troops to fight alongside government forces, while earlier this year senior security forces told MEE that the Pakistan army sent a brigade of combat troops to shore up Saudi Arabia's vulnerable southern border from reprisal attacks mounted by the Houthis.

The UAE, which is part of the Saudi coalition, was revealed by the New York Times to have recruited hundreds of Colombian, Panamanian, Salvadoran and Chilean mercenaries to do their dirty work in Yemen.

“Mercenaries are an attractive option for rich countries who wish to wage war yet whose citizens may not want to fight,” said Sean McFate, a senior fellow at the Atlantic Council and author of The Modern Mercenary.

"Latin American mercenaries are a sign of what's to come."

The first days on the battlefield were difficult for Ahmed as he witnessed death close up.

"When you see your colleagues being killed, you don't want anything but to flee.

"We were only trained for 40 days to fight so our experience was very limited. But the Houthis were killing dozens of us at a time," he said. "Apache and air strikes were the only ways to stop them."

When Ahmed tried to flee, the border defence teams prevented him and others from leaving unless they had been wounded or had fought for at least six months.

Throughout his time on the front lines, Ahmed thought about his family and the advice his parents had given him to remain at their side. Regretting that he had disobeyed them, he read the Quran and prayed that if he were to die, he would be a martyr.

In the meantime, some of Ahmed's friends had resorted to intentionally wounding themselves in order to be allowed to return home.

While some leaders within the pro-Hadi resistance movement oppose the idea of sending Yemenis to fight on the Saudi borders, contending that such fighters are needed inland, others suppoer it.

According to Ali Abdulqader, a member of the Popular Resistance movement in Taiz, Yemenis are obligated to take part in defending Saudi Arabia against the Houthis, just as the Saudi-led coalition has helped them.

"We are grateful to Saudi Arabia for supporting our fight against the coup and rebels. We should send Yemenis to fight on the borders," Abdulqader told MEE.

An unidentified person within the pro-Hadi resistance movement said that about 5,000 Yemenis left Aden in Saudi-led coalition ships for southern Saudi ports to push back advances of Houthi rebels along the Saudi borders, local media reported in September 2016.

According to the report, most Yemeni fighters were recruited from south Yemen provinces that are controlled by pro-Hadi forces and Saudi-led coalition.

Official Saudi sources denied the report at the time, while the Yemeni government has not commented on the issue.

Still, many within the resistance disagree with Abdulqader and say that most fighters on the Saudi borders are in fact mercenaries.

Adnan al-Saifi, another fighter for the pro-government forces in Taiz, told MEE: "We need those Yemeni fighters on the Saudi borders to fight the Houthis here in Taiz. We know they are not fighting for the sake of Yemen, but for money."

Saifi told MEE that because he does not fight for money, but to defend his province against Houthi advances, he has not considered leaving for the Saudi borders.

"I am not a mercenary to let the Houthis invade my country while I go fight them in another country," said Saifi, who explained that the fight in Saudi Arabia had little to do with Yemeni interests.

After spending nine months on the front lines, Ahmed finally returned to his village in early July. He had managed to save SR25,000 (about $6,600), which was enough to build a house, open a shop and get married.

"They were a very difficult few months and I lost some friends on the battlefield, but I managed to make enough money to make my dreams come true."

"I am building a house and I've already opened a small shop. I got engaged two months ago and will be getting married this Eid."

Although Ahmed is satisfied with his achievements, he promised his family never to return to the Saudi front lines as he considers the war to be pointless, with Yemenis fighting one another for no good reason.

Names in this report have been changed for security reasons