Yemen's Hadi says 'no negotiations' with Houthis in Geneva

Negotiations scheduled for this weekend will be 'just a discussion' about how to implement UN security council resolution, Hadi said Yemen's exiled president took a hard line Monday ahead of weekend peace talks in Geneva, ruling out negotiations with the Houthis and denouncing what he said was Tehran's "dangerous" meddling in his country.

President Abd Rabbuh Mansour Hadi said the sole item for discussion at the talks would be the implementation of a resolution adopted by the UN Security Council in April demanding the Houthis withdraw from the large areas of the country they have seized.

"There will be no negotiations," Hadi told Al-Arabiya television. "It will be just a discussion about how to implement UN Security Council Resolution 2216. We will have a consultation."

Asked if his government's delegation would discuss reconciliation with the Houthi negotiating team, Hadi said: "Not at all."

Bahah, who is also vice president, said the exiled government would head to the meeting with only one goal - "implementing 2216 and reinstating the state" overran by Houthis.

Once the legitimate government is reinstated, "all political factions return to dialogue to resume the political process... and approve the draft constitution and organise elections," he added.

Announcing the talks on Saturday, UN chief Ban Ki-moon asked all sides to enter them without preconditions.

Ban "reiterates his urgent call on all Yemeni parties to engage in these consultations in good faith and without preconditions in the interest of all Yemeni people," his spokesman said.

He said the talks were aimed at securing a ceasefire, agreeing on a withdrawal plan for the Houthis and stepping up deliveries of humanitarian aid.

After overrunning the capital Sanaa last September, the Houthis seized much of the country, prompting a Saudi-led coalition to launch a bombing campaign against them on 26 March. Hadi fled to Riyadh.

In the interview, Hadi again hit out at Saudi Arabia's regional rival Iran, charging that its meddling in his country's affairs was "more dangerous than al-Qaeda".

Yemen is home to al-Qaeda in the Arabian Peninsula, classified by the US as the network's deadliest franchise.

"Al-Qaeda could be eliminated, but here we have a systematically politicised action," said Hadi.

Iran has always denied supporting the Houthis, who have agreed to attend the talks.

A UN report presented to the UN Security Council in late April suggested that Iran has been shipping weapons to the Houthis since at least 2009.

Iran has denied accusations that it is meddling in Yemen and has accused Saudi Arabia of carrying out military aggression against the country.

In the capital Sanaa, coalition warplanes launched new strikes on the Houthis and their allies, hours after overnight raids hit Houthi military positions north of the city at Shamlan and Hamdan, witnesses said.

In Aden, a woman and three of her children were killed when a Katyusha rocket, fired by Houthis from the city's north, hit their home, pro-Hadi militia spokesman Ali al-Ahmedi told AFP.

The Houthis have been trying for five days to advance towards Buraiqa, a strategic part of Aden that houses an oil refinery and a port.

Medical officials said nine people, among them three civilians, were killed and 53 were wounded in 24 hours of fighting across Aden.

The Houthis fired mortar rounds at a western district of third city Taez, killing three civilians and wounding four others, while nine Houthis were killed in an attack by pro-Hadi fighters, officials said.

More than 2,000 people have died in Yemen fighting and raids since March. 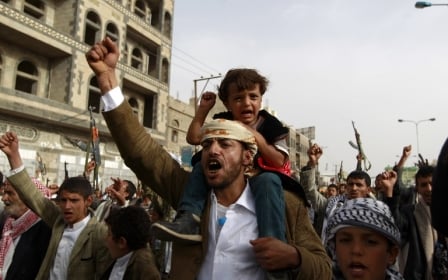