The conservative country is not used to seeing women working in shops, but the war has forced some to do just that 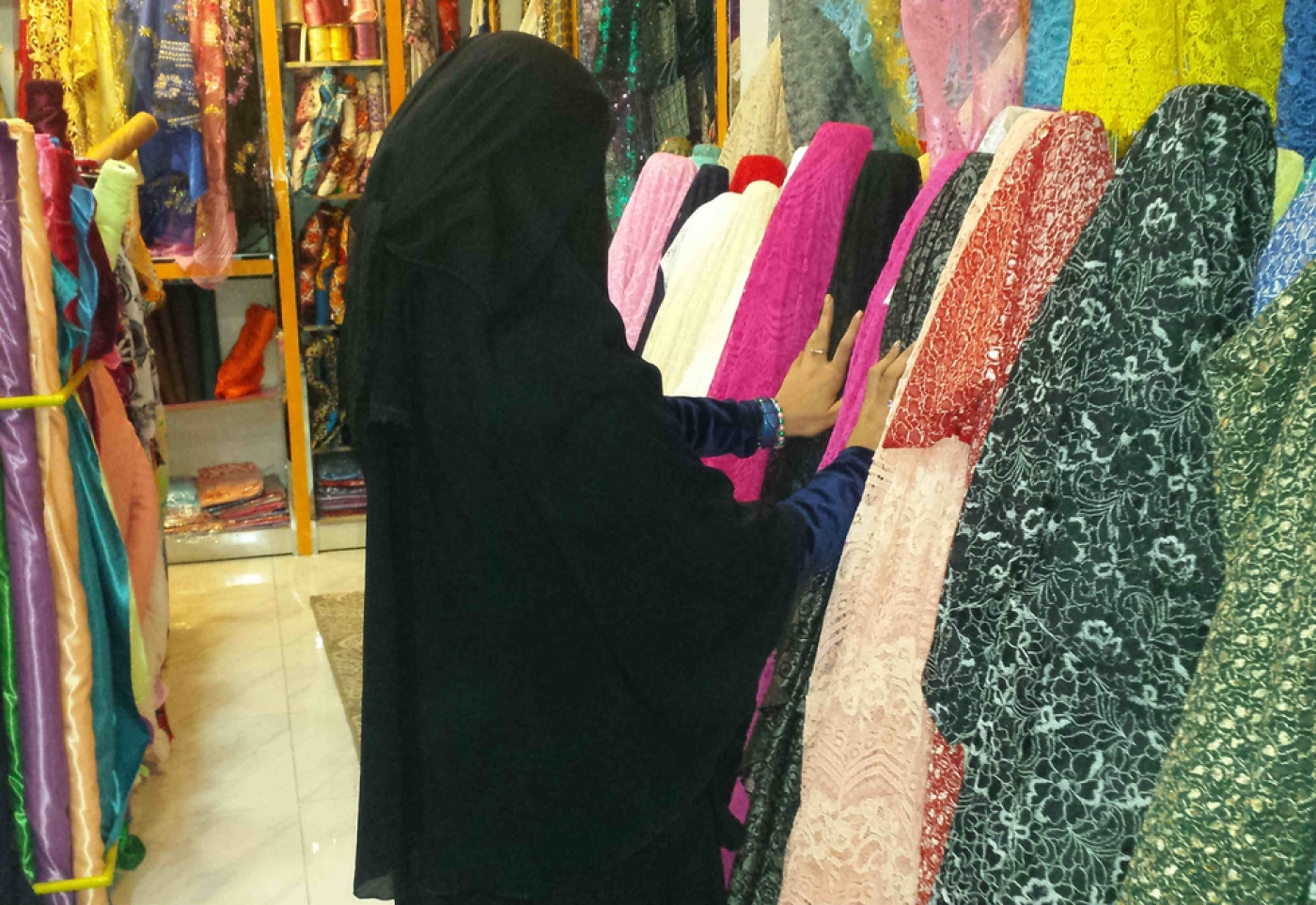 TAIZ, Yemen – Wafaa al-Zikri, 24, was forced to abandon her university studies and look for work to support her mother and four younger siblings. Her father died of kidney failure before the war and local charities withdrew their financial assistance.

"I am the eldest of five and without our father I had to take responsibility to eke out a living for my family after war broke out in Taiz," al-Zikri told Middle East Eye.

"I was willing to take any job available in order to earn enough money," she said.

I couldn't finish my studies if my family had no food

Since the civil war broke out in early 2015, many women have found themselves the sole breadwinner for their families after local charities, overwhelmed by requests for help, closed their doors.

Yemen's traditional social codes would have left many women unable to work, but these codes are slowly changing.

After three months of looking for work, Zikri found a job in a clothes shop alongside two other women. It was a ray of light in the storm that is Yemen, and such opportunities offer at least some respite for women like Zikri.

"I was in the fourth year of a degree in chemistry at Taiz University, but I couldn't finish my studies if my family had no food," she said.

Zikri had concerns about what people would think when they found out she was working in a clothes shop, but her friends encouraged her to support her family, she said.

The owner of the shop was welcoming and supportive, which also helped.

"I was worried about how our neighbours would react when they found out I had started working, but they were sympathetic about my situation and understood why I had to take the job, as they knew what our circumstances were like," she said.

But she did receive criticism from some people, Zikri said.

"In the first month, I really struggled to learn everything I needed to do for the job, but now I am much better, and new women learn from me when they start out."

Zikri started working in the shop, Man Yashbahak, a year ago and has no plans to leave.

In the city, besieged by the Houthis for nearly two years and where public employees haven't received wages in over six months, her monthly salary of 50,000 rials ($170) is badly needed. It covers food and transport costs for her family and allows her younger siblings to continue studying.

The war between those loyal to President Abd Rabbuh Mansour Hadi and rebel Houthis has plunged much of the country into an economic crisis and the UN has warned that Yemen is at risk of famine, with at least 17 million people unable to adequately feed themselves. At least 10,000 people have been killed.

Sakhr al-Dobaei, the shop owner, said that many young women have come to him over the past year looking for work, but he now doesn't need any more staff.

"When I hear about their family situations, and the circumstances they are living in, of course I want to help them out and give them work, and step by step they are learning how to do a good job," Dobaei told MEE.

Some of the young men are poorly educated, and they harass the women with lewd comments, so the shop assistants ask their male colleagues to serve the customer instead

"I have always had more than one woman employee at a time, so it is more comfortable for them to work."

The shop sells both men's and women's clothing, and Zikri and her colleagues have generally been able to sell to both genders.

But occasionally, they have had to ask their male colleagues to step in.

"Some of the young men are poorly educated, and they harass the women with lewd comments, so then the shop assistants ask their male colleagues to serve the customer instead," Dobaei said.

About five young women and four men work together in the store.

The challenges of surviving war and its repercussions are having a cultural impact in Yemen where women are, for the first time, taking jobs outside the home.

Sultan Hasan, 35, works alongside Zikri selling clothes. He has also worked in the shop for about a year and described his experience of working with women shop assistants as "successful".

"Our society doesn't really accept women working as garment vendors, but over the last year I have realised that it is no problem at all, and it is not shameful," he told MEE.

The shameful thing is that we cannot help these women more, and that some of them are forced to suffer alone, or beg in the streets for food

"The shameful thing is that we cannot help these women more, and that some of them are forced to suffer alone, or beg in the streets for food."

While some male customers may prove a bit difficult, women are more than happy to buy their clothes from women, as they are aware of what they are looking for, according to customers.

"I always hear that we are a conservative society and women should not be working selling clothes, but this is false, and actually the opposite is true," a woman customer, Narges Abduqader, told MEE.

"Since we live in a conservative society, we should be buying our clothes from women and not from men," she said.

"I am so glad to see women working here, and I buy mine and my children's clothes from them to encourage them to continue."

Mallak al-Maqtari, 18, is a high-school student and is one of five children, but her two older siblings are preoccupied with their own families so she found herself supporting her parents.

Her father used to work as a mechanic, but when war erupted, he closed his workshop in al-Logainat, in the centre of Taiz, and fled with the family to his home village, 60 km away.

Humans created social conventions, and they can break them too

When he returned last year to re-open his workshop, he found himself struggling with the work due to his age, and so he sold it to raise funds to open a shop for his daughter.

"My father is an old man, and he cannot work anymore. He gave me the money to open this small shop, which we depend upon for our basic needs," Maqtari told MEE.

"The shop is near our home, so there is no issue with me working there."

Maqtari is shy, and said she has found it hard to refuse people's requests to buy things from her on credit. She is now nearly out of money.

"Our neighbours said they would pay their debts as soon as they received their government salaries, but they have not been paid in Taiz since last August, so now I am going to have to close my shop," she explained.

Maqtari has managed to keep studying, despite running the family shop, as she studies at home, and she will take her final exams later this year.

Ahmed Silal works in the administration department at the Taiz University and is one of Maqtari's regular customers.

He said he was not opposed to the idea of women or girls working as shopkeepers, but he is unable to pay his debt to her, as he has not received his salary.

"I used to buy from Maqtari on credit, and at the end of every month I would pay my debt, but the government has let us down, so I cannot pay my debts to her or to others who have loaned to me," Silal told MEE.

Fadhl al-Thobhani, a professor of sociology at Taiz University, said women entering the workforce was just one of the effects of the war and one which he believes has both positive and negative consequences.

"Humans created social conventions, and they can break them too," Thobhani told MEE.

"But they do not have the right to break religious conventions," he said, explaining that he does not believe women should be able to serve male customers or work alongside male colleagues, as he said this was a step contrary to Islam.

But while the war has forced many to the front lines or to steal to feed their families, these shop assistants and shopkeepers are merely trying to help support their families, Zikri stressed.

"Even if I manage to complete my studies, I will not be able to find a job because of the war we are living through, so I will work until my younger brother, Hamdi, who is 17, finishes school and is able to work." 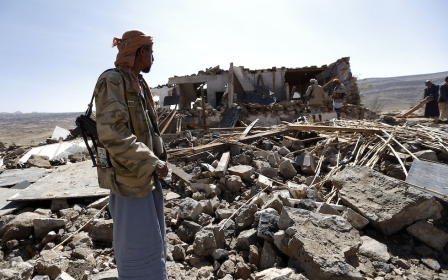 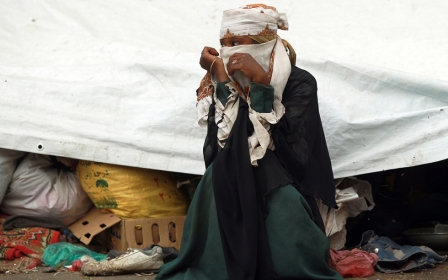 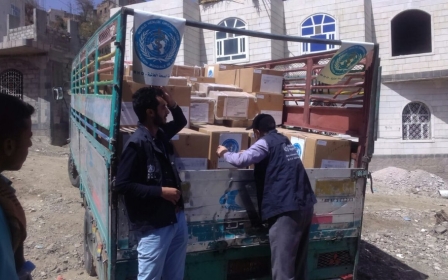