Houthi rebels still hold most population centres in Yemen, including Hodeidah and Sanaa (Reuters)
By
MEE and agencies

Yemen's warring parties have agreed to reopen Sanaa airport in the Houthi-held capital and resume oil and gas exports, sources told Reuters news agency, as Western nations pressed them to accept confidence-building steps before the end of UN-led peace talks in Sweden.

Delegates from both sides told Reuters that they had agreed to resume oil and gas exports to help shore up central bank coffers, and the revenue will be used to pay salaries in both government and Houthi-held areas.

Houthi delegate Abdelmajid Hanash said international flights from and to Sanaa would stop in Aden and the airport in Sayun, in southern Yemen, but the UN would oversee the safety procedures, Reuters reported.

The UN has not yet officially commented on the details of the agreements.

The Saudi-led military coalition that started a bombing campaign in Yemen in 2015 controls the country's airspace. The Houthis hold most population centres, including Hodeidah and Sanaa, from which it ousted Abd Rabbuh Mansour Hadi's government in 2014.

UN Secretary-General Antonio Guterres was due to attend the talks in Rimbo, Sweden, on Thursday, the day the closing round of consultations will be held.

His expected arrival will come only hours after his office said it had evidence the Houthis were using Iran-made missiles, a charge the Saudi-led alliance levels against the rebels as grounds for restrictions on the Hodeidah port and Sanaa airport.

Another round of Yemen peace talks has been tentatively scheduled for January, according to UN and Yemeni officials.

What to do with Hodeidah

The Iran-aligned Houthi movement and the Saudi-backed government were still discussing a UN proposal on the contested port city of Hodeidah, a lifeline for millions of Yemenis facing starvation, on Wednesday.

Hadi's premier, Maeen Abdulmalik Saeed, told reporters in the government's base in the southern port city of Aden that there may not be enough time for a full agreement on Hodeidah to be reached at the talks, the first in over two years.

"We talked about [it] a lot, but with the limited time we have, we can’t talk about all the points in this round. The important thing is to build confidence and then go into the details of the Hodeidah file," he said.

A UN spokeswoman said both parties had received a draft agreement covering the status of Hodeidah. "We hope to receive positive responses," she said.

UN envoy to Yemen Martin Griffiths, who is trying to avert a full-scale assault on Hodeidah by the Saudi-led coalition, is asking both sides to withdraw from the Houthi-held city.

His proposal envisions an interim entity being formed to run the city and its port, and the deployment of international monitors.

Both sides have agreed to a UN role in the port, the entry point for most of Yemen's commercial imports and vital aid, but differ on who should run the city.

The Houthis want Hodeidah to be declared a neutral zone, while Hadi's government believes the city should fall under its control as a matter of sovereignty.

"The devil is in the details - withdraw how far (from Hodeidah), the sequence, who governs and delivers services," said one diplomat, speaking on condition of anonymity.

The sides have also yet to agree on a transitional governing body, although a deal was struck on a prisoner swap that may see 15,000 detainees freed. 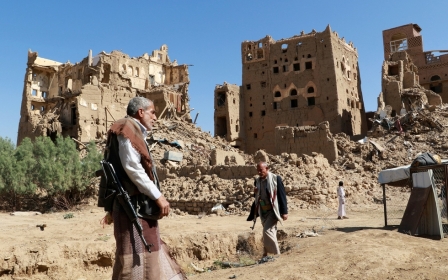