Al-Aqsa attack: Palestinians all but abandoned

Kamel Hawwash
With a weak response from Arab and Muslim countries to unprecedented restrictions at the Al-Aqsa mosque, Palestinians are left alone to defend the holy site from Israel's incursions 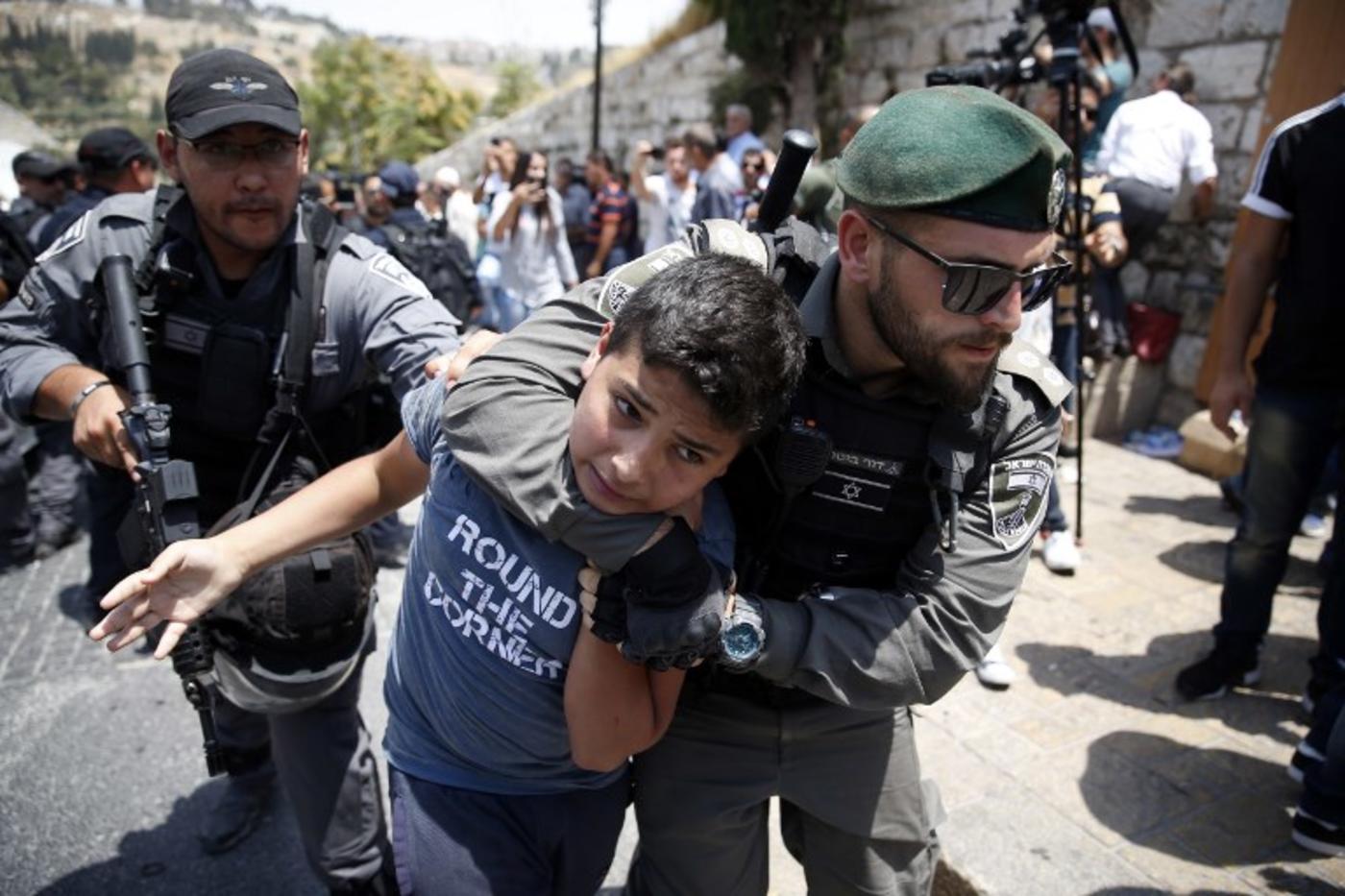 The implications of the deadly incident last Friday at Al-Aqsa go way beyond the right to prayer.

Five Israeli citizens were killed during the attack at the Lion’s Gate entrance to the Al-Aqsa compound, Islam's third holiest site, which is the most sacred site in Judaism and is known as the Temple Mount.

The defence of Al-Aqsa, cherished by 1.6 billion Muslims all over the world, has been left to the 300,000 Palestinian residents of Jerusalem who face a most brutal and merciless occupier

The three attackers, cousins from the Jabareen family, hail from the Arab Israeli city of Um Al-Fahm, which sits just inside the Green Line, and were on the security forces' radar as a potential threat.

The two Israeli police officers killed in the incident were from Israel’s minority Druze community. One came from the mostly Druze but also Arab town of Maghar and the other from the Druze village of Hurfeish.

The bodies of the police officers were handed over quickly to the families and were buried on the same day, while Israeli officials are still holding those of the attackers.

The Jabareen family established three mourning tents in Um Al-Fahm which were quickly taken down on the orders of Israeli prime minister, Benjamin Netanyahu. On Monday, Public Security Minister Gilad Erdan suggested the attackers homes may be demolished.

The coming days may see a rise in tensions between the Palestinian and Druze communities in Israel following the attack. Druze participation in the Israeli security forces is resented by Palestinian citizens of Israel and by Jerusalem residents who often face them at Al-Aqsa's entrances.

Immediately after the attack, the Israeli authorities cleared the Holy Sanctuary of all who had come to pray, religious leaders and the employees of the Waqf, the body which administers the site, and then closed it. The Friday prayers scheduled to take place were cancelled and the call for prayers were silenced.

That had not happened since an Australian set the mosque on fire in August 1969, two years after Israel occupied East Jerusalem during the Six Day War.

Palestinian Authority President Mahmoud Abbas phoned Netanyahu and “expressed his strong condemnation over the fatal Jerusalem shootout and the Israeli closure of the holy Islamic site of al-Aqsa mosque,” according to the Palestinian press agency WAFA.

Abbas stated his “rejection of any violent incidents from any side, especially in places of worship” and called on Netanyahu to “end the closure imposed on the holy site, warning of the consequences of such measures”.

Netanyahu assured Abbas that the “status quo” would not change at the compound, calling for all sides to stay calm. Palestinians did not appreciate Abbas' condemnation and his standing is likely to reduce further, making him an ever weaker partner for peace.

How we got to here

The "status quo" which was established after Israel occupied East Jerusalem, including the Old City, was that the Jordanian Waqf would administer the Holy Sanctuary, Muslims had a right to pray while non-Muslims, including Jews, could visit the site but not pray or perform other religious rituals there.

Jordan’s special role in Jerusalem was acknowledged in the 1994 peace treaty between Israel and Jordan which stated that Israel "respects the special role of the Hashemite Kingdom of Jordan in Muslim Holy shrines in Jerusalem".

But the treaty stops short of giving Jordan any legal, political or religious authority over Islamic holy shrines in Jerusalem.

There has been no further reaction from Jordan, which is of concern to Palestinians who had expected stronger action from the king

Israel has repeatedly pushed the limits of the "status quo", particularly through larger and more frequent visits by Jewish settlers, religious leaders and politicians to the sites which Palestinians and the Waqf see as incursions, because they are not coordinated with the Waqf. This has caused repeated tensions between Israel and Jordan, leading to concerns among Palestinians that Israel is working to impose its sovereignty over the site.

In 2003, fearing that Israel was changing the status quo in Jerusalem, Abbas signed an agreement with Jordan’s King Abdullah which solidified Jordan’s custodianship of Muslim and Christian places in the holy city.

A statement from the Jordanian palace said: "In this historic agreement, Abbas reiterated that the king is the custodian of holy sites in Jerusalem and that he has the right to exert all legal efforts to preserve them, especially Al-Aqsa mosque."

The agreement also emphasised “the historical principles agreed by Jordan and Palestine to exert joint efforts to protect the city and holy sites from Israeli Judaisation attempts."

While Jordan recalled its ambassador in 2014 in protest of Israeli practices at the site, its reaction to last Friday’s incident and the closure of the mosque has been rather low key.

King Abdullah condemned the attack in a telephone conversation with Netanyahu, but  slammed Israel’s two-day closure of the mosque and demanded it be reopened.

On Saturday evening, before he left for his state visit to France, Netanyahu said: “I instructed that metal detectors be placed at the entrance gates to the Temple Mount. We will also install security cameras on poles outside the Temple Mount but which give almost complete control over what goes on there.

"I decided that as of Sunday in the framework of our policy of maintaining the status quo, we will gradually open the Temple Mount, but with increased security measures.”

Netanyahu's statement, in itself, is contradictory because the measures he detailed are not part of the status quo. However, there has been no further reaction from Jordan, which is of concern to Palestinians who had expected stronger action from the king.

However, Palestinians are also dismayed at what they see as a broader, low key reaction to the closure of the mosque from the Arab and Muslim world with the exception of Qatar whose minister of foreign affairs said the closure was "a severe violation of holy Islamic sites and a provocation to millions of Muslims around the world".

The Arab League called for Al-Aqsa to be opened immediately and for any change in the status quo to be stopped. Egypt and Turkey put out rather mild statements. Turkey expressed its regret over the incident, insisted the site must stay open and Israel's closure immediately cancelled.

Concern for the third holiest site to Muslims usually triggers demonstrations in many Arab and Muslim countries in which protestors chant, “We would sacrifice our lives and our blood for you Al-Aqsa”. That chant was heard in Jerusalem and Jordan, but nowhere else.

In fact, the overall response from the Arab and Muslim world ranks amongst the weakest ever recorded. This may be an outcome of the changing political landscape in the Middle East, which was brought about by US President Donald Trump’s recent visit to the region and the focus during that visit on terror.

While Palestinians will argue that for a people under a 50-year illegal occupation, attacks against "the occupation forces" are legitimate forms of resistance and therefore not terror, the prevailing climate following the Riyadh conference is less supportive.

The issue of terror, though no clear definition has emerged of what it is, is at the heart of the unprecedented standoff between Qatar and four other Arab states including Egypt and Saudi Arabia.

While the Palestinians are angered by Israel’s interference in their right to unimpeded access to Al-Aqsa, which Israel may gradually reinstate, albeit under stricter security arrangements, the situation will not return to what it was prior to the attack unless Jordan acts decisively.

With an the Arab world which favours Israel and America’s normalisation-led approach to regional peace, Jordan may feel it lacks the support of its Arab brothers to secure a return to the status quo.

The conclusion for the Palestinian people, especially the residents of Jerusalem, is that they have been abandoned.

Not only have they lost the backing of their Arab and Muslim brothers and sisters in their pursuit of liberation, independence and freedom, the defence of Al-Aqsa, cherished by 1.6 billion Muslims all over the world, has been left to the 300,000 Palestinian residents of Jerusalem who face a most brutal and merciless occupier.

Israeli ministers will be exchanging high fives for making the most of an opportunity to take over the revered site, but history shows that humiliating Palestinians and leaving them with little hope will lead to more violence.

Photo: Israeli border guards detain a Palestinian youth during a demonstration outside the Lions Gate, a main entrance to Al-Aqsa mosque compound, due to newly-implemented security measures by Israeli authorities which include metal detectors and cameras, in Jerusalem's Old City on 17 July 2017 (AFP)