Aleppo's calamity leaves the burning question: What is humanity in 2016?

Kiran Nazish
The best response to the crisis spreading across the globe is not passivity or cynicism, but expressing the feeling of shame as loudly as possible 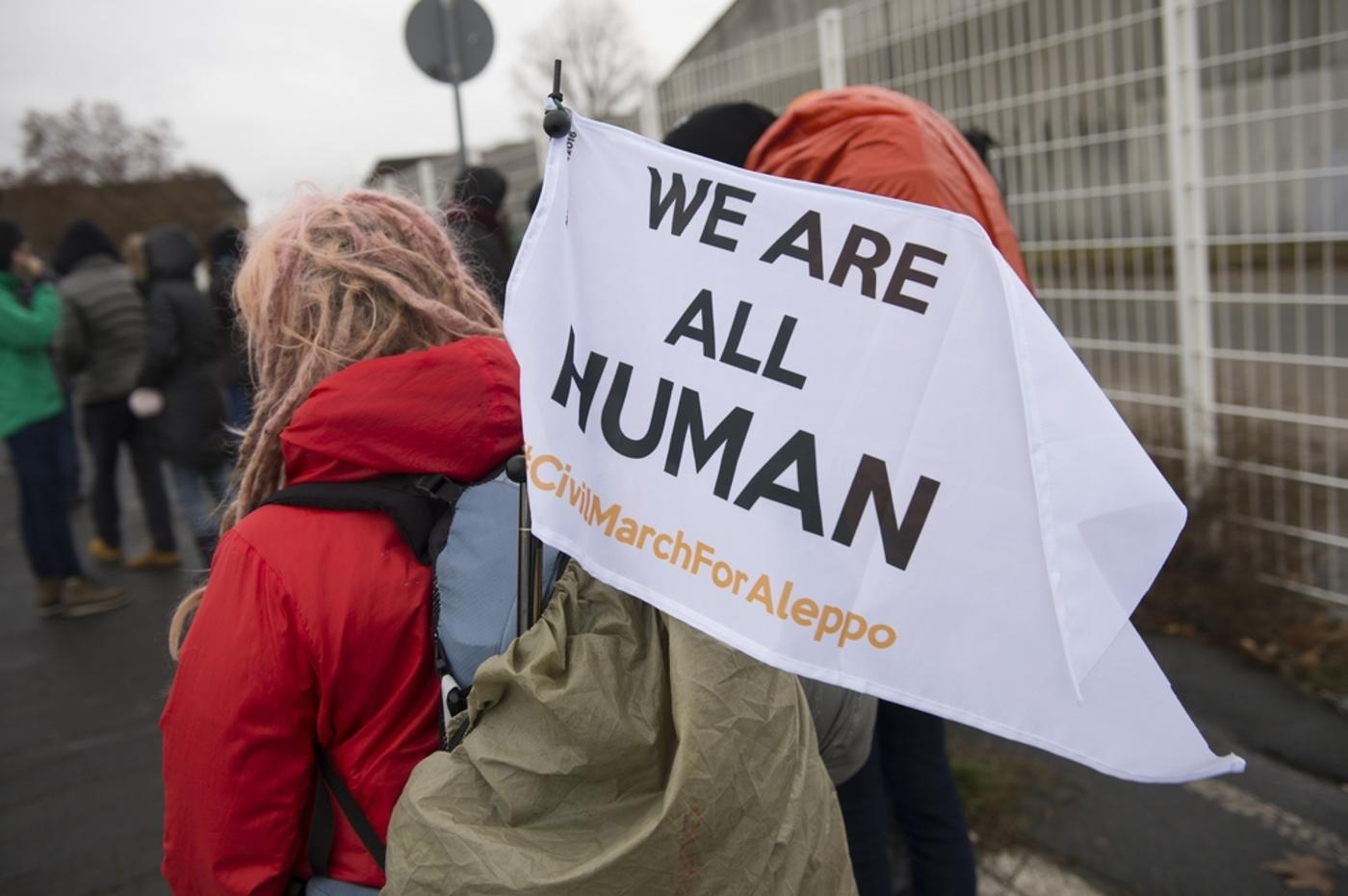 The last days in Aleppo have been like none other, and they won't come back, but they will remain a lasting memory all over the world.

The sporadic and troubled evacuation efforts after the ceasefire, then the shattering of the ceasefire, shootings and killing during the evacuation process, halting of evacuation and the mind-blowing spread of misinformation have together overwhelmed public attention on Aleppo.

Hadi, 35, who escaped earlier to Turkey, often called me frantic and weeping on the phone, worried and uncertain what could be happening to his sister and parents still stuck inside East Aleppo.

Hadi would say over and over, 'Humanity defeats us.' One time, he paused thoughtfully and asked quietly, 'what is humanity?'

Past midnight, we’d stay on the phone, as he reminisced how, from being an educator, he became a dreamer, a thug on a motorbike, holding guns under his belt, hungry for one day where he could see his own children going to school and becoming something better than him.

But then many bombs fell, and his reality became like the city of Aleppo today.

Fire bellowing from its gut, signs of hope vanishing in the smoke, grey and burnt, the earth shaking with the blast of artillery and mortars, gaping holes ripped in large buildings.

Hadi would say over and over, “Humanity defeats us.” One time, he paused thoughtfully and asked quietly, “what is humanity?”

Twelve million Syrians have left their homes, fleeing the violence of a brutal regime, and the multiple wars by multiple parties that broke out one after another, and simultaneously, perpetuating and complicating the conflict from every possible angle.

The chaos in Syria today was not inevitable.

Not a new war

The city’s fall marks the biggest victory for the Assad regime in nearly six years of catastrophic civil war. Much of this has been written and talked about.

Journalists and activists covering Syria have stretched their efforts to bring you minute by minute reliable information.

Those who have been dedicated to document this evolving violence will tell you that today the fall of the Syrian revolution was not inevitable. But that more than Assad’s violence, which the Syrians fought till the breaking of their human spirit, the blame goes to the inaction of the international community, which includes countries who abused the sanctity of the Syrian people, using them as their proxies, and the United Nations, that failed to take any action, other than verbal condemnations.

Social and political change has happened when people demanded it; when the people did not push institutions and governments, nothing changed.

Step back a little and think: What should humans do, when institutions that are meant to provide justice and peace fail to offer it?

Syria is not a new war or a new experience that we could not have been prepared to deal with. We don’t have those excuses, which we had for Vietnam, or Bosnia - or the Holocaust.

Six million people were killed in the Nazi Holocaust. It took decades for humanity to process the distress, while details of the horrors gradually emerged over many years.

Syrians are being killed and trapped, in the age of the internet, where information of violence is coming out every day. Children dying in the arms of their siblings;, mothers holding an injured child in one arm, and mourning the death of another; being consoled by another child, who holds the dead body of an infant, blood and smoke on both their faces.

What kind of people can ignore or excuse these horrors that are accessible from the palm of your hand? Or what kind of international community can say, ‘we did not know what to do’ when the world has lived this over and over and over?

The question is, if we have to rely on certain systems to protect our world, and those systems perform less efficiently more often than they don't, should those systems be considered reliable? Is this question worth ignoring?

You and I have seen, acknowledged, and mourned the horrors of the past, and we have been conditioned to believe that the institutions that exist will do everything in their power to never let it happen again.

We believe that the international community is doing what it can. We think it is smart to be empathetic to the UN’s limitations.

The UN has to get Russia to come on board, but isn't that ironic? Why would Russia support UN demands? Russia is shooting civilians in evacuation buses, as Syrians are forced to flee from their homes that were destroyed by Assad and Putin’s weapons.

What is riveting to me, is how apathy - in the form of excuses, diplomatic failure and proxy bets - has so ruthlessly attached itself to our social process, so that we do not look at ourselves as part of the human race, but merely as organs of a religion, or components of a nation or creed.

The core reason for this global apathy seems to be that "our wellbeing comes before someone else's wellbeing". That concept ignores the true concept of wellbeing.

The logic goes, one would not wish to be entangled in the controversial mess of Syria. Except that the violence in Syria has been quite simple, and relatable to all of us.

What you see now in Syria is a result of an uprising against a life of suppression. A life we all as humans fear to live. Under the kind of dictatorships we all abhor.

What the Syrian people want is a basic human need, a free mind. It’s impossible to disagree with them.

Syrian pain is our pain

In fact what they fought for from the beginning of the revolution and through the mess they have arrived at reflects their resolve and love, which is symbolic of all of humanity; it’s not their pain alone, but a pain of all of human race. And you, and I, are part of this race.

It has now become more urgent to look deeper into our reason for inaction, as we stand at the brink of ignorance which is seizing our humanity. This inaction in effect will only fuel the most destructive aspects of power around the world.

One of the greatest failures of our social systems today is that when we talk about courage, or humanity, we make it sound as if it’s something only possible for a few people.

We call them heroes, saviours - though courage and humanity are purely an instinctive capability that every human is born with.

Ignorance on the other hand is artificial, impulsive and uncomfortable; a passive reaction that your mind uses as a defence mechanism.

We can do better

That is why ignorance leaves a feeling of restlessness, stress and confusion at the back of our minds. Even humans who are deficient in other mental or physical capabilities can experience efficient love. Courage and humanity are forms of that love, and being the most basic of human instincts, are buried right in our guts.

Humans with their will and ideas can push institutions and governments to muster up a better action plan.

Humans, individuals and groups, both can be stronger than institutions. We see this truth emerge in history, that social and political change has happened when people demanded it; when the people did not push institutions and governments, nothing changed.

The best viable plan, to recover from the crisis spreading across the globe is not passivity or cynicism, but in fact, expressing the feeling of horror and shame as loudly as possibly.

A confrontation is necessary with institutions like the UN and the International Criminal Court, which have reaffirmed the war crimes, but failed collectively in taking any action against them.

Clearly these institutions need to think of better ways to perform. As evacuations continue in Aleppo, Syrians need your attention, and at this time, the true essence of humanity will be reflected in your voice.

- Kiran Nazish is an independent journalist based in northern Iraq. Nazish has written on the war against IS, the Kurdish struggle and the refugee crises in the region, and was awarded the Daniel Pearl Fellowship in 2014. Nazish has bylines in the LA Times, the Washington Post and Al-Jazeera. She tweets @kirannazish

Photo: A participant's flag reading 'We are all human' is fixed at a backpack during a solidarity march for Aleppo in Berlin, Germany, on 26 December 2016. Organised by Polish journalist and blogger Anna Alboth, the "Civil March for Aleppo" aims to build political pressure to end the violence in Syria. (AFP) 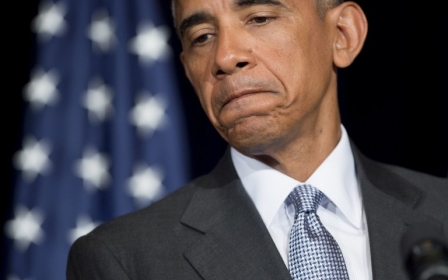 Syria War
The truth behind the inferno of Aleppo
Hossam Shaker