In Cairo, the pot boils

Amr Khalifa
On the anniversary of the military coup which brought Abdel Fattah al-Sisi to power, Egyptians are bursting with anger at his regime. Here are three ways this could boil over 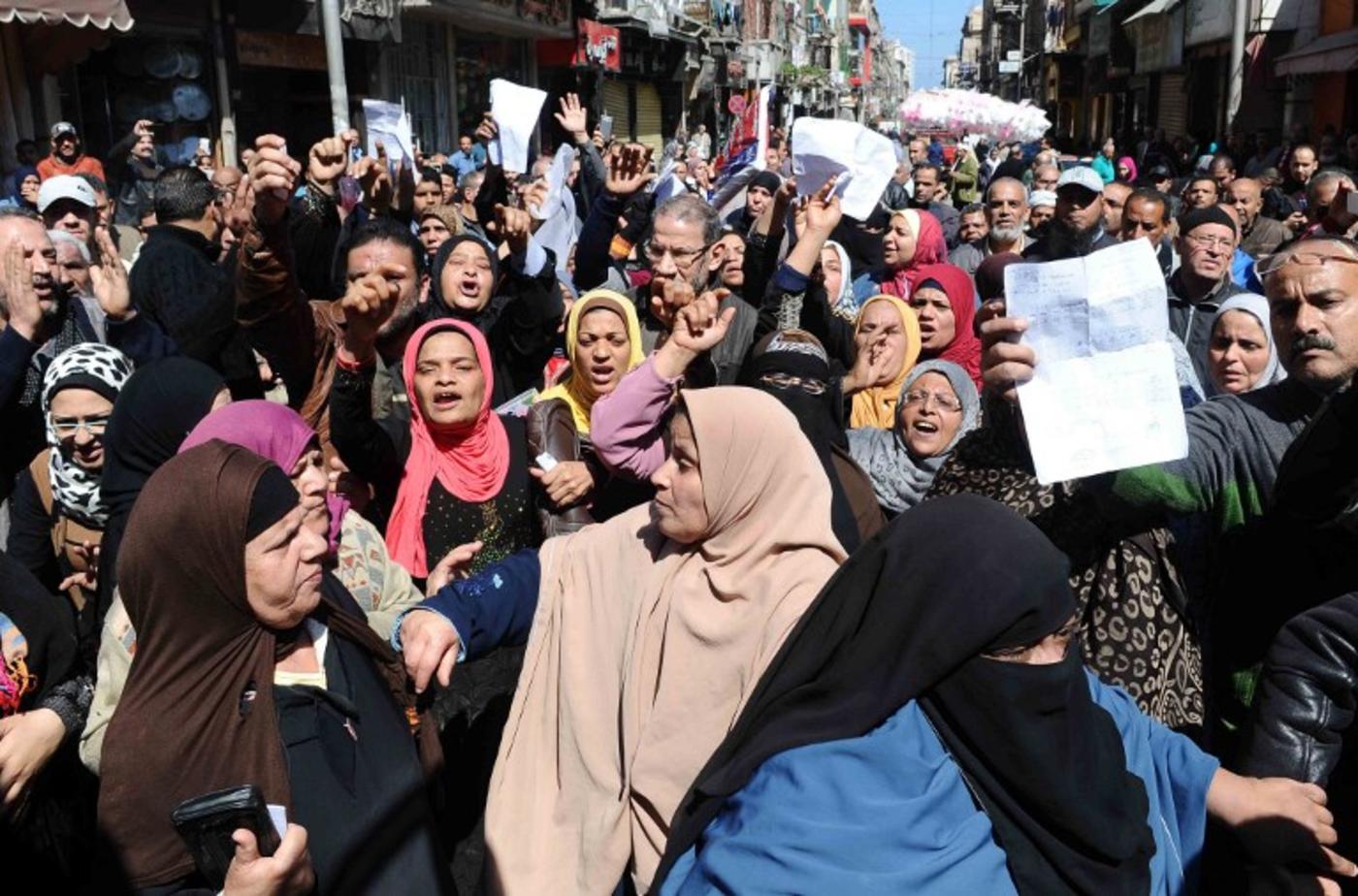 “Sisi has failed himself and Egypt,” Bahey Eldin Hassan, director of the Cairo Institute for Human Rights, told me last night, the eve of the fourth anniversary of the coup that ousted Mohamed Morsi from power.

Since the uprising in 2011, a binary of Islamist or military rule has dominated Egypt’s political arena, which has been a nightmare at different times, for different Egyptians.

'Descend, do not be afraid. The regime is brittle and weak'

But no one in their darkest nightmare could have imagined the noxious mixture of systematic repression, security failure and economic recession which has followed.

Many Egyptians admit publicly to feeling broken. Analysts have suggested we are tired and, with muted reaction on the streets to the Red Sea island ratification this past month, the revolution may seem like a distant dream.

But there are many others, intellectuals and laymen alike, who believe that the sporadic protests and the outraged tweeps are piling up, and are calling for Egyptians to descend to the streets.

“Descend, do not be afraid. The regime is brittle and weak…#DownWithSisiTheTraitor,” Hatem El Askr, an Egyptian intellectual, posted on Facebook after the cost of butane cylinders used for cooking were raised 100 percent, alongside a steep rise in gasoline.

Just last night, motorists invaded the 6th October bridge in central Cairo, carrying placards denouncing a 43 percent increase in the cost of petroleum goods, an issue which will ignite inflation for months to come.

“It ended with treason,” blasted another about the Islands giveaway. “This boil is ready to explode at any moment,’’ said one well-known Twitter user.

Four years on, Egypt is such a powder keg. Going forward, temperature and risk in Cairo will only rise.

Conditions in the country may have been bad under Mubarak, but under Sisi, Egypt has entered unparalleled autocratic territory.

Initially, the counter-revolution, which effectively began 9 March 2011 with the first attack by the army on Tahrir Square revolutionaries, sought to roll back the gains of a popular uprising which was trying to bloom into a real revolution changing mindsets and governance.

Fast forward several years. Sisi, the security state and the business elite have now consolidated power while systematically eliminating all competition, including the arrest in recent weeks of potential presidential candidates.

Sisi and company understood what the revolutionaries could not: 18 days changed nothing but a president. This wasn’t a revolution, but an uprising. For real change, organisation, political experience, ideological coherence and an understanding of history were necessary - and none were present.

For real change, organisation, political experience, ideological coherence and an understanding of history were necessary - and none were present

And so, through a combination of blunt force and propaganda, the counter-revolution strangled the uprising. But the arrogance of the military, shepherded by Sisi, will ultimately cause the pendulum to swing back.

How Egypt has degenerated since the coup

Three wrinkles since the coup may bring a seismic shift: a toxic brand of hyper-nationalism, a terrorism spreading from Sinai into the Delta and an economic crisis that has yet to be curtailed by a punishing devaluation of the Egyptian pound.

“The state and its supporters, invoking a chauvinistic and, at times, xenophobic nationalism, are giving themselves the right to categorise so many Egyptians as traitors,” Ashraf El Sherif, non-resident Fellow at the Project on Middle East Democracy, a Washington, DC-based think tank, said this month.

This phenomenon threatens to introduce the darkest of shadows: Egyptians standing against one another.

With a nation split on the one hand between Sisi, the security agencies, his supporters and Islamists, progressives and average, non-politicised critics, unable to afford basic necessities with inflation at 30 percent, invisible fractures endanger a nation, and potentially a region.

Add to this volatile mixture decaying support among Sisi’s hardcore Christian loyalists whom the Islamic State has repeatedly targeted, particularly since the commencement of mainland attacks in December 2016. Stir in the vicious campaign against NGOs, judiciary and political activists, many of whom were rounded up for declaring the Red Sea islands Egyptian. Sprinkle in chronic electricity shortages and the picture darkens - literally.

In attempting to annihilate revolutionary fervour, Sisi unintentionally created more. All that is missing is the trigger.

The killing of one Egyptian, Khaled Said, in 2010 was sufficient trigger. The IMF loan may trigger new explosions as there will be further price rises and nary a social safety net to help millions absorb the pain.

Just as the Mubarak regime underestimated Egyptians in 2011, Sisi and most of his inept team are drunk with arrogance

Or the trigger may be one of the many incidents of corrupt Egyptian policemen willing to murder innocent Egyptians in cold blood as they did last November. Just as the Mubarak regime underestimated Egyptians in 2011, Sisi and most of his inept team are drunk with arrogance and deem those possibilities limited.

They could not be more off the mark.

On this turbulent stage, three scenarios loom up, each a political tightrope, with no safety net.

Not all the Sisi camp are asleep at the wheel. Some recognise that, in harming national security, Sisi is hurting not only Egyptians at large, but also elite business interests which overlap with the interests of the military, which controls a significant segment of the economy.

Sisi is not Morsi. His sense of paranoia and alliances would result in a departure dripping in blood

Just as Sisi worked in silence with his cohorts against Morsi and the Brotherhood, it is entirely possible, for reasons far from altruistic, that others are preparing a poisoned presidential Pepsi.

In contrast to revolution, this devolution would replace a bloody dictator with a palatable autocrat. Sisi, however, is not Morsi. His sense of paranoia and alliances would result in a departure dripping in blood. As breathtakingly difficult as this scenario is to absorb, one must bear in mind, with the Rabaa massacre in our rear-view mirror, that Sisi has proven himself to be capable of war-crimes scale blood-letting.

Those in denial about inter-army struggles should look closely at Egyptian army history, particularly Egypt’s first president Mohammed Naguib who faced his own struggle when he made moves to remove the army from politics and put its focus back on the front lines. Naguib, of course, was “effectively ousted” by Gamal Abdel Nasser.

Many disbelievers in a 2011 2.0 scenario argue that the opposition is too fractured and our citizenry too fatigued to stand up to draconian rule. While the opposition continues to be decimated – it is nicknamed “generation jail” - and was mostly silent except for small demonstrations after the surrender of the islands, the largest demonstrations since the Sisi takeover were held in April 2016 after the islands deal was announced.

Can it recover? Just remember: while Sisi has purchased weapons worth billions of dollars, the number of impoverished Egyptians has risen, with 90 percent of the wealth concentrated in the hands of the elite 10 percent.

Only four months ago, Egyptians were in the streets screaming “we want bread”. Fatigue has been overcome by rising anger as it becomes clear that the security president can’t secure the nation or stabilise it.

Along with intellectuals like El-Askr who was calling for people to go to the streets, even the non-politicised, like Engy Samir, a model and radio personality, said to her thousands of followers, “We are nothing but slaves to them…these price rises are presented as a fait accompli... instead of remaining silent …demonstrate.”

When the explosion comes, it will be far bloodier than its 2011 incarnation for two reasons. Many in the opposition camp have been heard to say: “We left the square too early” and, some variation on, “It was highly naive to think that the military institution would understand, respect or fear the peaceful approach.” The crushing of democracy in 2012, no matter what you think of Morsi, only eviscerated hope in democracy as an option.

Conversely, the ministry of interior and national security forces are keenly aware that their pride took massive public blows in 2011. A second punch would be highly damaging to their respective empires.

Unhinged repression of uprising 2.0 would be cheered by a Sisi who views opposition as treason. Should protests erupt, Hassan of the Cairo Institute for Human Rights says he believes either the army will move against Sisi or a "bloodbath" will occur.

A gross inability to carry on civilised conversation with opposing political camps is central to the third, and potentially most dangerous, scenario. Turn on Egyptian TV, radio or social media and you shall find a nation split.

Each side discharges bile, disdain and hate with such consistency that families have been torn asunder

The Sisi clan refuses to employ nuance in understanding the opposition is as varied as Egyptians themselves. Those in the opposition are equally emotionally and verbally violent in denouncing Sisi’s camp.

Each side discharges bile, disdain and hate with such consistency that families have been torn asunder. Millions remain convinced the army will shield them from Islamist rule and millions more refuse to march to the beat of the Guns of Itihadiya, the presidential palace in Cairo.

When people do not know or respect civil discourse, what is the alternative? Though petrifying, and least likely, the absence of discourse brings us closer to Egyptian fighting Egyptian.

Is it possible that none of this unfolds? That Egyptians are pummelled into submission and silently accept failures galore for decades more? It happened under Mubarak for 30 years, some would say.

But Sisi is a different beast altogether, and the fault lines too numerous for an explosion not to rock the land of the tired, the hungry, the oppressed.

Photo: Dozens of Egyptians take part in demonstration in front of a government office in downtown Alexandria on 7 March 2017, against the decision of the supply ministry to limit the distribution of subsidised bread to holders of a new system of digital cards issued by the ministry. (AFP)