David Hearst
Coronavirus is spreading in Egypt, whether the authorities deny it or not 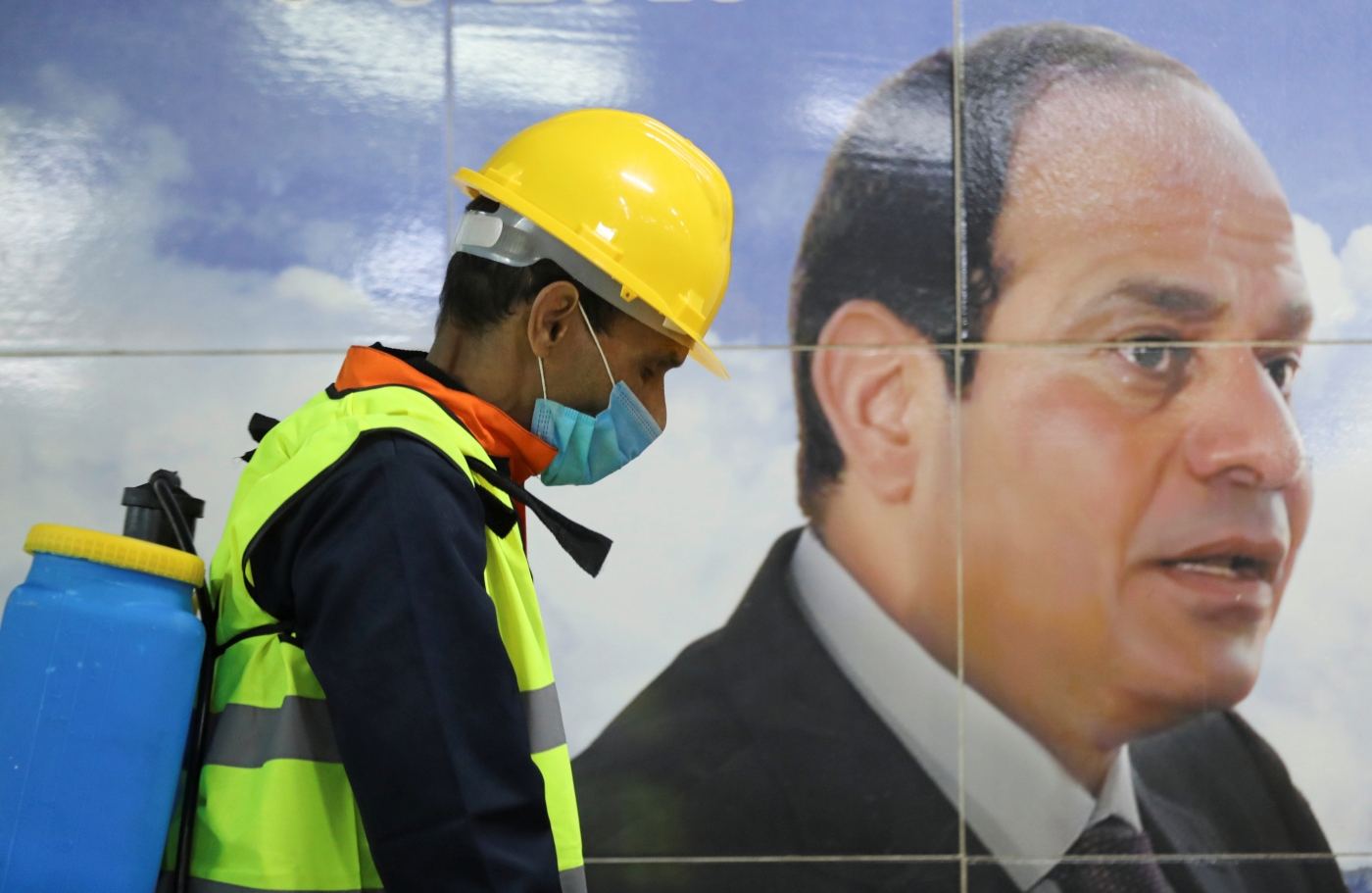 A member of medical team is seen beside a banner for the Egyptian President Abdel Fattah el-Sisi, as he sprays disinfectant as a precautionary move amid concerns over the coronavirus disease on 22 March (Reuters)

Every country has struggled to come to terms with the reality of a deadly pandemic. Iran's Supreme Leader Ayatollah Ali Khamanei's first reaction was to call coronavirus a "ridiculous disease" used as a pretext by Iran's enemies to discourage people from voting in parliamentary elections.

Two days later he recommended a prayer to fight the disease.

Egypt’s first reaction was to send its health minister, Hala Zayed, to China in solidarity. "Had it not been for the very strong precautionary measures taken by the Chinese government, the situation could've been different worldwide and the outbreak could've been larger," Zayed said.

At that point - on 1 March - Egypt's only announced case was a Chinese national whose infection had been detected on arrival at Cairo airport. He or she had been discharged from hospital in late February. The Chinese flag lit up the Great Pyramids and Sphinx in Giza for Chinese New Year.

But trouble was brewing.

At least 97 foreigners who visited Egypt since mid-February showed symptoms of, or tested positive for the virus. Infectious disease specialists from the University of Toronto - Ontario has a large Egyptian diaspora - were suspicious of the disparity between official and likely infection rates.

"Under the conservative estimate of Covid-2019 burden, where linked and ambiguous cases are eliminated, we estimated an outbreak size of 19,310 cases in Egypt," they said, using a mix of flight data, traveller data and infection rates. "Egypt likely has a large burden of Covid-2019 cases that are unreported and greater public health clinical capacity may help identify and manage cases."

When the Guardian's Cairo correspondent Ruth Michaelson reported this, and another former Guardian hand, Declan Walsh, bureau chief for the New York Times, tweeted out the Canadian research, but removed the tweet later, the authorities announced it was revoking Michaelson’s press permit. They accused her of "repeated and deliberate offensive behaviour," and accused Walsh of "professional violations" although the NYT has as yet suffered no sanctions.

Worse was to happen to Egyptian citizens who revealed the true spread of the virus. Last Saturday the security forces arrested two people accused of spreading rumours about the virus, bringing the total number of arrests on this count to seven. The day before the interior ministry announced the arrest of two other people they claimed were members of the Muslim Brotherhood.

The authorities accused the two of spreading false and fabricated rumours "claiming far from the truth that it spread widely in Egypt, the state's inability to confront it," and "sarcasm on the measures the state is taking to combat the virus with the aim of raising public angry opinion," Egyptwatch reported.

The same treatment was meted out - initially at least - to sufferers of the virus. They could suffer in silence, just as long as they did not claim to have the virus. One sufferer who went to the hospital in a city in the Nile Delta immediately attracted the attention of local security. They threatened that if he announced he had the virus, he and his family would be punished.

But the virus is spreading in Egypt, whether the authorities deny it or not.

The outbreak on the cruise ship A Sara, where 44 crew and passengers tested positive, led to chaotic scenes in Luxor. Medical teams from Cairo and Qena descended on the lobbies and restaurants of hotels and cruises in the area to stage haphazard and random tests among both workers and guests.

Their sample was chosen at random by the hotel owners in one case. Michael, a British tourist from Manchester told MEE: "We woke to find armed plainclothes policemen closing the hotel doors and telling us that we could not leave until everyone was checked," he said. "At first, we thought that there were people who had tested positive, but later the management just chose some Egyptian guests and convinced them to go and do the tests." The teams left after four hours.

The reason for the fear, denial and tokenism is obvious: Egypt's tourism industry, whose revenues reached $12.57bn last year, has already shut down once after the 25 January popular uprising in 2011 and again in 2015 when a Russian passenger jet was brought down by a bomb. Everyone from local workers upwards feared a repeat performance. Which of course is exactly what has happened now. The cruises are finished and so are all foreign tourists.

The truth is that well before the virus struck, Egypt's health service was on its knees, as were other public services.

Britain's National Health Service (NHS) noticed last year a surge in doctors from Egypt and had begun investigating the possibility of attracting more, a well-informed source in the British Arab medical community told me.

In the profession it was known that at home, Egyptian medical specialists were spending most of their time working in private hospitals and would not appear at their official posts for months on end. The Egyptian health service was clearly decaying.

As far as coronavirus is concerned, Egypt’s prison system is one giant petri dish

When the virus struck, this meant chaos at local level. Kareem al-Shams, a doctor at Luxor General Hospital, said: "None of the staff, including me, are trained to deal with a corona-infected case. We don't have suitable equipment for basic surgeries and operations, let alone a deadly and highly contagious virus. We must get dozens of cases of people complaining of cold symptoms and we send them away with antibiotics or flu medicine. Our reception for the emergency room is built for 100 people but more than 300 people wait in it."

The same can be said of Egypt's prison system. This was overcrowded, disease-ridden and a death trap, very much by design. The horrendous conditions inside were used as a method of terrorising the political opposition to Egypt's military rulers.

A report from the National Council for Human Rights in May 2015 said that police stations were 300 percent overcapacity and prisons 160 percent overcapacity. There are anything between 40,000 and 60,000 political prisoners in Egypt right now. There is ample evidence that prisoners with underlying health conditions are left to die, under-treated or denied the drugs they need, largely because President Abdel Fattah el-Sisi wants them to.

As far as coronavirus is concerned, Egypt's prison system is one giant petri dish. As Amr Magdi, Human Rights Watch's researcher for Egypt wrote: "If there is one piece of advice a prisoner in Egypt would give a new prisoner, it would probably be: "Don't get sick".

Inadequate medical care is the norm and threatens thousands of ill prisoners. Previous Human Rights Watch reports show that prison officials have "let die" many prisoners in recent years, even though their illnesses were manageable, such as diabetes or heart conditions.

Sisi to the rescue

After months of denial, President Sisi shut schools and universities for two weeks and announced he was spending 100bn Egyptian pounds ($6.4bn), to fund the anti-coronavirus strategy. The catch of course is that - as always - the bulk of these funds will go to the army. There is no disbursement of public funds of which the army does not demand the lion's share. The people serves the army, rather than the other way round. 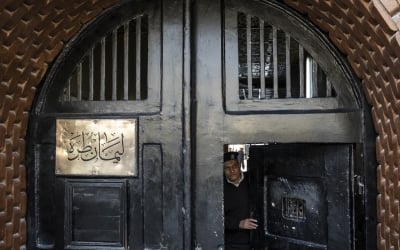 Not everything changed last Saturday. Protest is still punishable by arrest and imprisonment. The Egyptian-British novelist Ahdaf Soueif was one of four  arrested for protesting about it on Wednesday. Put it all together and a disaster is silently unfolding in the Arab world's and the Mediterranean’s most populous nation.

Europe and the US have looked the other way since Sisi seized power. John Kerry, Barack Obama's secretary of state, famously barked at his aides when they urged him to demand that the International Red Cross gain access to Egypt's prisons: "Give me a policy Sisi won't shout at me for," said Kerry, the secretary of state of Egypt's biggest donor.

Sisi cowers under international pressure. The real problem is that there is none on him.

On Wednesday, a coalition of rights groups, activists, politicians and members of civil society called on the United Nations to ask Egypt to release its political prisoners amid the global coronavirus pandemic. By the time there is a serious demand that he release prisoners and allow the Red Cross unfettered access to all of Egypt's prisons, it may be too late.

It probably already is.

The international community - if such a concept still exists -  should really consider what happens in Egypt the day after the virus passes.

Maybe only then will Europe and the US rue the day they allowed Egypt's most ruinous military ruler a free pass.