Day of judgement? Saudi Arabia rides out criticism at UN 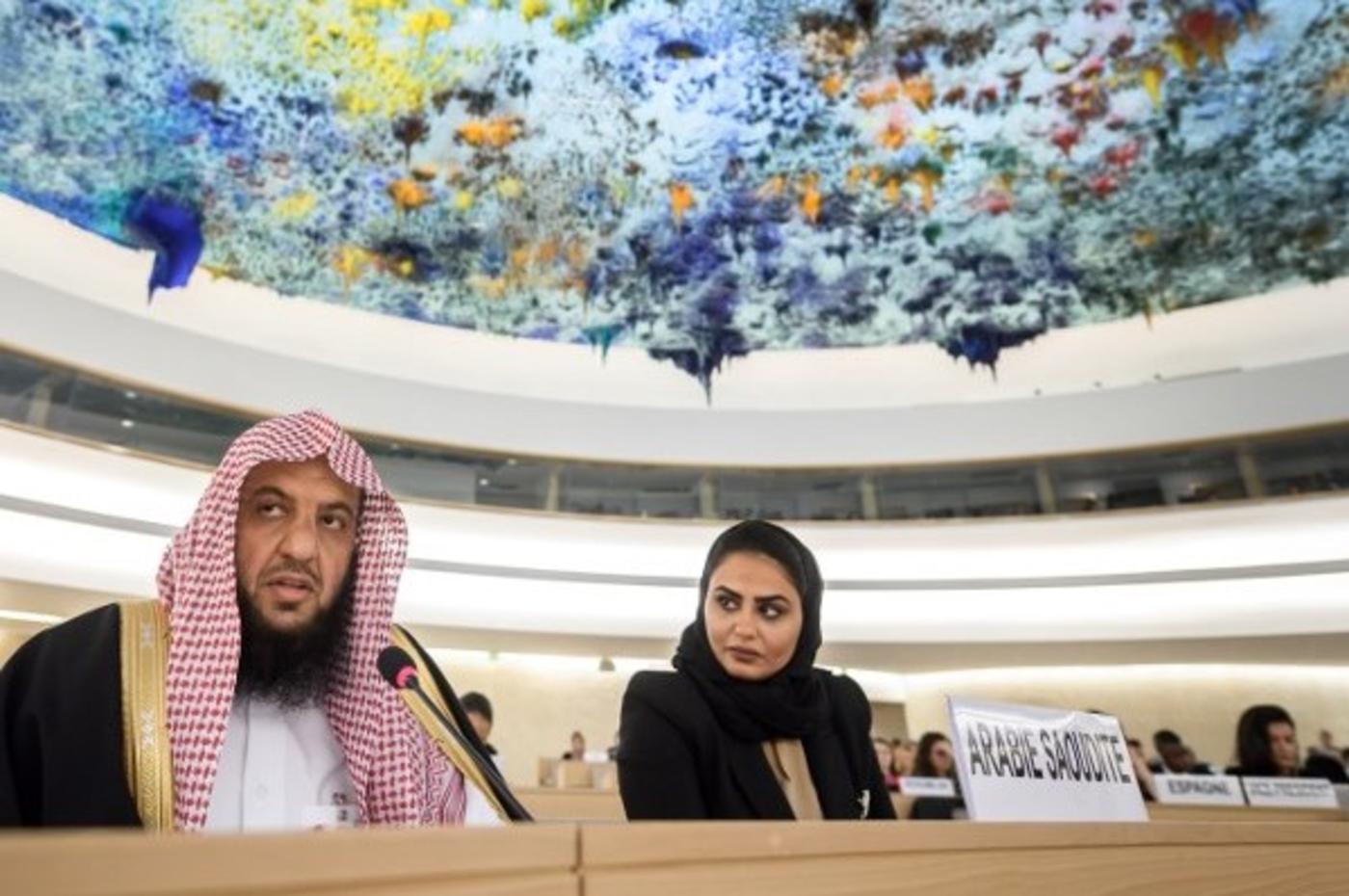 For the first time since the killing of Saudi journalist Jamal Khashoggi on 2 October at the Saudi consulate in Istanbul, Saudi Arabia had to publicly confront the criticism of some UN member states on Monday.

'Our hands are tied with all the money that the Saudis contribute to the UN,' a UN insider told Middle East Eye

The Human Rights Council session looking at Saudi Arabia’s initiatives for human rights promotion - the first since 2013 - turned into an occasion for some countries to express their condemnation of the abominable murder of the famed Saudi columnist and to leverage their disapproval of the kingdom’s conduct over a range of persisting human rights violations.

For other countries, however, it was a precious opportunity to pledge or renew their allegiance to the Gulf state and show they would be ready to turn a blind eye to those very same violations.

Germany, the United States, UK, Spain, Italy and other European states expressed their "grave concern" over the killing of Khashoggi, an insider-turned-critic, whose murder at the hands of a Saudi hit squad tied to the powerful Crown Prince Mohammed bin Salman has caused a global uproar.

While France avoided naming the murdered journalist, an array of Arab and Asian states deliberately ignored it, instead singing the praises of the kingdom on whose cheque books they heavily depend.

The Saudi delegation came well prepared to face its foes. Equipped with a team of diplomats, legal officers and even a religious scholar, the head of the delegation, Bandar al-Aiban, president of Saudi Arabia’s Human Rights Commission, thanked the UN member states for offering their "suggestions". Meanwhile, his team made sure to take notes of which countries were criticising the kingdom and to what extent.

Khashoggi's murder dominated most of the remarks from Western countries, overshadowing other violations of human rights committed by Saudi authorities both inside and outside the Kingdom

Khashoggi's murder dominated most of the remarks of Western countries, overshadowing other violations of human rights committed by Saudi authorities both inside and outside the kingdom.

Germany, which announced it was halting arms sales until the investigation into the murder is cleared up, called upon Riyadh to provide a complete and detailed response over the killing. The UK envoy said his country was gravely concerned by the deteriorating human rights situation and described the murder of the Saudi columnist as "most concerning".

Meanwhile, in line with President Donald Trump's recent remarks, the US delegate adopted a carrot-and-stick approach. "We condemn this premeditated killing," the head of the US delegation said. "Holding accountable those identified as being involved and continuing investigation is an important first step. A thorough conclusive and transparent investigation carried out in accordance with due process, with results made public, is essential."

Al-Aiban’s reply was measured. "Our country is committed to carry out a fair investigation with regard to Khashoggi’s case," said the Saudi official.

As the Saudi delegates closed ranks and listed a number of articles in the Saudi press law and sharia principles that endorse freedom of expression and respect for human rights, it was clear from the statements that Western allies were not yet ready to let the kingdom get away with the killing so easily.

On Monday, the attitude of the Saudi delegates was less contemptuous than usual. However, the sense of awkwardness was palpable in the assembly hall of the Palais du Nations in Geneva. Not only for the Saudi delegation, which was fully aware of the embarrassment created by the Khashoggi case, but also for the United Nations as a whole.

An insult to human rights

Saudi Arabia’s membership of the Human Rights Council has been strongly criticised by rights groups ever since its accession in 2014. It was perceived as an insult to the hundreds of human rights defenders and political activists languishing in Saudi jails. In January a group of UK lawyers started a campaign asking for the removal of Saudi Arabia from the HRC.

"Our hands are tied with all the money that the Saudis contribute to the UN," a UN insider told me. "Saudi Arabia membership expires next year and it is unlikely any measure will be taken in the remaining time," he added.

Amid a financial squeeze following the US decision to cut its contributions to some of its agencies, the UN has welcomed Saudi donations. Last April, Riyadh made a landmark $50m contribution to UNRWA, on which some 5.4 million Palestinian refugees depend, as the US announced it would cut its UNRWA funding.

In addition to its contribution to the UN's World Food Programme, in 2018 alone the kingdom contributed $1bn - together with the UAE - to the UN for its humanitarian work in Yemen. it's therefore highly unlikely that the council will decide to expel such a generous contributor.

As a result, even UN criticism over the Khashoggi case has been very carefully worded. It took almost two weeks for Michelle Bachelet, the high commissioner for human rights, to issue a statement calling upon Turkey and Saudi Arabia to "reveal what they know".

Interestingly, France avoided naming the Washington Post columnist and made a more general remark on press freedom. "We recommend Saudi Arabia to guarantee freedom of journalists and human rights defenders and to immediately put an end to arbitrary arrests," said the head of the French delegation.

France, together with the UK and the US, is amongst Saudi Arabia’s most important arms suppliers. Riyadh is the second biggest purchaser of French arms, with deals worth over $11.43bn in the last decade.

Egypt, whose military establishment depends heavily on Saudi Arabia for financial support, praised Riyadh for its "commitment to the promotion of human rights"

In 2017 alone, licences potentially worth $16.8bn to Saudi Arabia were approved. The UK has also signed multi-billion pound contracts for the sale of 48 fighter jets to the kingdom early this year while the US remains Saudi Arabia's closest military and logistical ally in the region.

Germany was the only country in Europe - along with Poland and Iceland - to mention Saudi Arabia’s role in the Yemeni conflict. "We recommend Saudi to take all possible measures to protect civilians in Yemen and allow unimpeded commercial and humanitarian access,” said the German envoy.

As Western allies expressed their concerns, the kingdom's Asian and Arab allies looked at the glass half full, praising women’s right to drive and the new measures planned by the kingdom to strengthen women’s social and business roles.

The delegate, however, forgot to mention that the kingdom would not allow in Muslim citizens from countries it perceives as enemies, like Qatar.

Countries like India, Indonesia, the Philippines and Nepal made sure to stay clear of any semblance of criticism of the kingdom’s human rights record. These countries have hundreds of thousands of migrant workers toiling in the kingdom, whose remittances are essential to the economies back home.

Equally, Palestine and Jordan, both on the Saudi payroll, were encouraging the kingdom to "continue its good practices", while Iraq and Lebanon, where the Saudis continue to exert an influence on the Sunni communities, carefully avoided any critical observations that may backfire in due course.

Saudi Arabia's Arab neighbours have to navigate troubled waters, with unresolved conflicts on their doorstep in Yemen, Syria and Libya, Islamic State pockets still active in some territories and millions of refugees still unable to return home. Having a strong patron like the Saudi kingdom is indispensable for most Arab regimes at this time of uncertainty and rising tensions governing both regional and international relations.

And until the US decides on whether or not it will continue to back the 33-year-old Saudi crown prince, many of these states find it safest to align themselves with the young ruler who may stay in power for a long time.

- Barbara Bibbo is an Italian journalist living between Doha and Geneva. She has worked at Al Jazeera English for eight years, doing extensive research on international issues and world-leading figures for the Talk to Al Jazeera show. She started her career in print, as a correspondent for Il Messaggero Veneto, the Gulf News and Italian News Agency ANSA from the Gulf region.

Photo: Saudi cleric Sheikh Saleh Al-Sheikh, a member of the Saudi Arabia delegation, delivers a speech before the UN Human Rights Council during the Universal Periodic Review on 5 November, 2018 in Geneva (AFP) 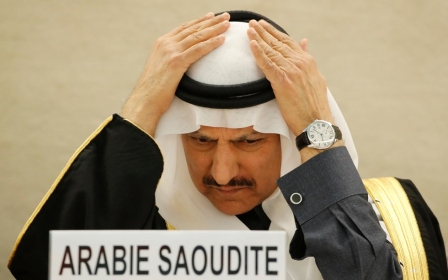