Defund the police: We need an alternative to the racist US system

Nada Elia
With their origins in slave patrols, alongside contemporary training by Israeli forces, US police have always prioritised 'property' over humanity A much-needed national conversation is taking place across the United States, as citizens take stock of the pervasiveness of law enforcement violence in cities throughout the country.

The uneasy awareness of just how rampant this murderous problem is was expressed in one sign I saw at a protest in Everett, Washington: “How many were not filmed?”

Along with the denunciation of police brutality is an equally timely discussion of the militarisation of police, who now regularly appear in riot gear at various sites of protest, ready for “urban warfare”.

This ominous expression was recently used by the Minnesota Department of Public Safety in a tweet on 30 May, announcing that the Minnesota National Guard and state police would triple their numbers on the streets “to address a sophisticated network of urban warfare”.

The actual context was civilian protests against the 25 May killing of George Floyd by police officer Derek Chauvin, who held Floyd down for more than eight minutes as the unarmed African American man pleaded: “I can’t breathe.”

The term “warfare” was immediately criticised on social media platforms, where many noted it refers to armed conflict between two military forces - not a police force dealing with the citizens it is theoretically mandated to “serve and protect”.

Yet, what we saw in Minneapolis - and what we have seen since in many US cities, from Washington to Seattle - is a hyper-militarised force trained by one of the world’s most sophisticated armies, which views its mandate as controlling an enemy within and maintaining an illegal occupation: namely, the Israeli army.

Of course, law enforcement violence in the US is centuries old, with many of the country’s police forces having their origins in runaway slave patrols. Their mandate, from the very beginning, was to protect the “property” of wealthy whites, rather than the human rights of an oppressed, downtrodden population seeking freedom.

So, in light of the many references being made in the past few years to the training of US police forces in Israel, it is important to emphasise that US police brutality long predates these joint trainings, which only started in 2002 as part of “counter-terrorism measures” following the 9/11 attacks.

Speaking for the millions of Black families devastated by law enforcement violence, Black Lives Matter and the Movement for Black Lives are making one demand: not to end the joint US-Israeli trainings, but to “defund the police”.

Nevertheless, the joint training of US police and the Israeli military has absolutely changed the practices of US police officers. The training is provided by a military force whose very mandate hinges on the racist enforcement of injustice - a force that does not even pretend to treat all people equally.

As soldiers in the Israeli army regularly receive orders to shoot to kill, always with the assumption that they are neutralising a dangerous enemy, the training they give to US police has translated into the rapid-fire murders we have seen there in recent years.

In 2014, Tamir Rice, 12, was fatally shot in the chest within two seconds of the arrival of police to the park where he was playing. He did not die immediately, and yet his 14-year-old sister was handcuffed and taken away when she tried to approach him as he lay in a pool of his own blood.

A few years earlier, seven-year-old Aiyana Stanley-Jones was killed by a bullet to the head as she slept in her home. The police officer who killed her, Joseph Weekley, was part of a SWAT team trying to arrest an adult male, raising questions over why a special weapons and tactics team would be deployed for an arrest in the first place.

In 2014, Chicago police officers killed 17-year-old Laquan McDonald by shooting him multiple times in the back, “almost immediately” after exiting the squad car, and then again as he lay on the ground.

No attempt had been made at engaging in a conversation with these victims, just as the Israeli military does not try to enter into conversations with Palestinians. Sadly, there are many more similar, immediately fatal encounters between Blacks and US police, including some we may never hear about.

In addition to weapons training by Israeli soldiers, which has translated into the militarisation of US police and a noticeable predilection to use guns first, some US police officers are trained in Krav Maga, an aggressive Israeli hand-to-hand combat style.

The official self-defence technique of the Israeli army, it is not considered a sport, and as such does not concern itself with the safety of the victim, aiming instead at inflicting maximum pain, quickly and efficiently. One website promoting the fighting technique states: “All styles of punching, kicking, chokes, and take-downs are employed with the aim of neutralizing the enemy in the shortest amount of time possible. Krav Maga has no limitations. Groin, eyes, throat, and face are all fair game.”

Such exceedingly dangerous combat techniques, aimed at neutralising an enemy within seconds, are now finding their way into US police training, just as we are seeing more immediately fatal encounters between US police and unarmed citizens. People knowledgeable in Krav Maga recognised it in Chauvin’s placing his knee on the neck of Floyd, leading to his asphyxiation, and in other incidents.

By contrast, we can look at footage of Rodney King’s violent arrest in Los Angeles in 1991, which shows him being tasered, struck repeatedly with batons, kick-stomped in the back and hogtied. Yet, even that horrific arrest, which sparked the LA riots, was not a fatal encounter. King was not shot dead within seconds of police arriving at the scene.

I am not suggesting that US police are learning racism and brutality from Israel. With their origins in slave patrols, US police forces have always prioritised “property” over humanity.

Nevertheless, the training of US police forces by the Israeli military has certainly escalated the violence that US cops engage in when dealing with people of colour. So, even as we demand that the US stop joint training exercises with the Israeli military, we must also address the longstanding racism of US police, which made them seek such training in the first place.

If we succeed in ending the training of US police forces in Israel, do we want a return to pre-2002 brutality? This is the basic understanding behind the Black Lives Matter calls to defund the police and create community alternatives to a system that is essentially, fundamentally racist. 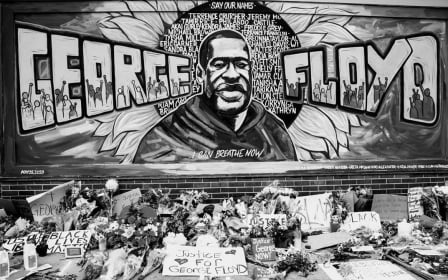