Hannah Porter
The American justice system should provide recourse for the families of civilians killed or injured by US drone strikes. A recent case in a US federal appeals court failed this test 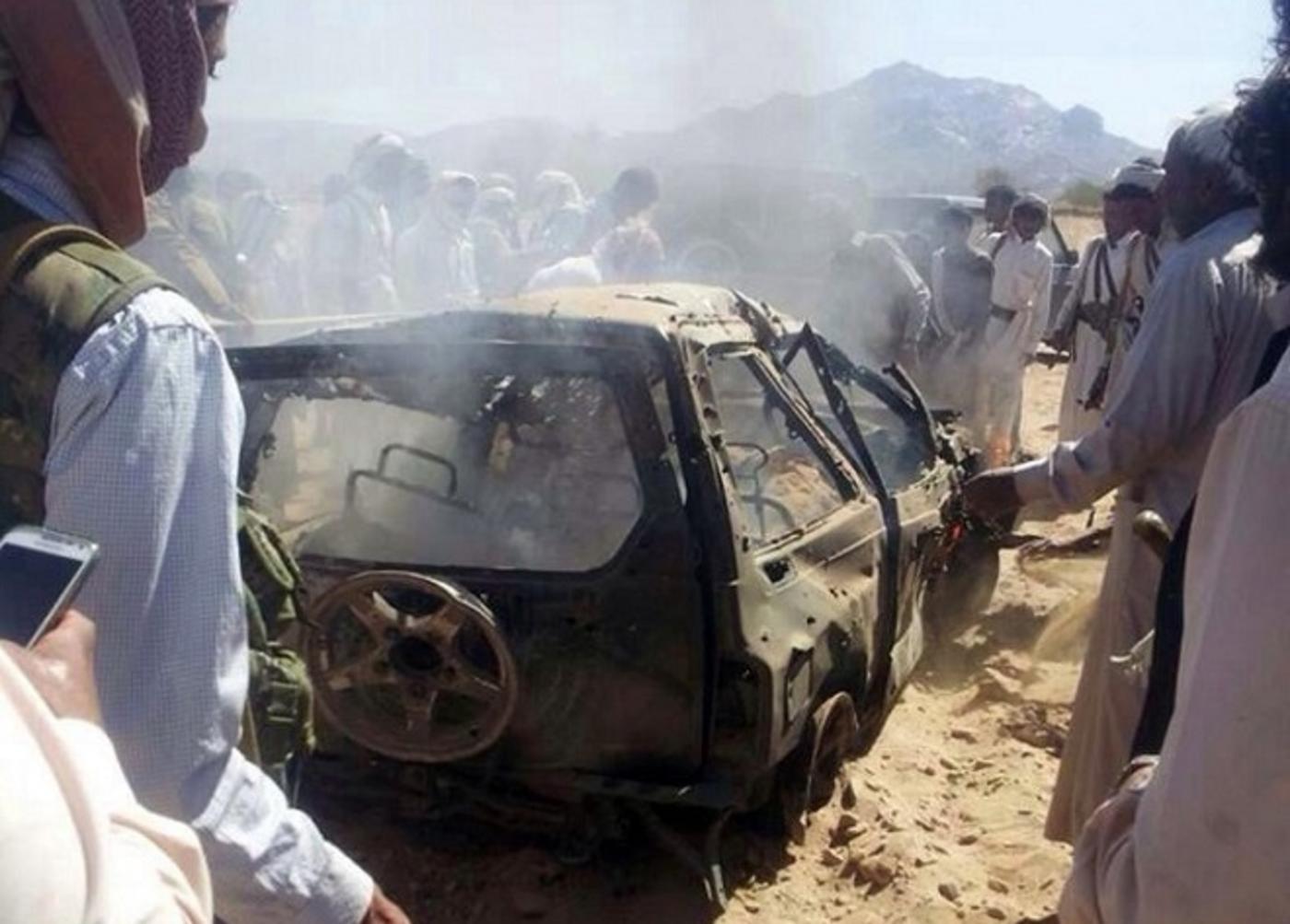 In late August 2012, an imam by the name of Salem bin Ali Jaber travelled with his family from Mukalla to the town of Khashamir in Yemen’s eastern Hadhramout governorate to attend a relative’s wedding. Known for his eloquent sermons and anti-extremist sentiments, Salem was invited to lead prayers at the town’s mosque.

Suspected local al-Qaeda affiliates quickly got word of his sermon denouncing their ideology and, within a few days, three men were dispatched to search for him - twice at his father’s house and finally at the mosque.

Once Salem was aware that these men were looking for him and afraid of what they wanted, Salem asked that his nephew, a local policeman named Waleed bin Ali Jaber, accompany him to meet them.

The group of five gathered outside and Salem sat down with two of the men under a palm tree. Shortly thereafter, members of the Jaber family “heard the buzzing of the drone, and then heard and saw the orange and yellow flash of a tremendous explosion”. The first two strikes killed Salem, Waleed, and two of the three men. Two more strikes were deployed, killing the remaining man.

Last week, the US Court of Appeals for the District of Columbia Circuit dismissed a case brought forth by Salem’s brother-in-law and Waleed’s uncle, Faisal bin Ali Jaber. Faisal charges that the US government mistakenly killed the two noncombatants in a “signature strike”, in which an unidentified target is pinpointed based on metadata that detects patterns of suspicious behavior.

According to charges put forth by Faisal and two other plaintiffs, the strike constituted a violation of international laws governing the use of force, the Torture Victim Protection Act, and the Alien Tort Statute, which allows foreign citizens to bring cases of human rights violations committed outside the United States to American courts.

The plaintiffs allege that the attack was unnecessary, as there was “no urgent military purpose or other emergency” to justify the drone strike and that killing the alleged targets was not necessary to defend against an imminent threat to the United States or its allies.

They also argue that the risk to nearby civilians was excessive in comparison to the military objective since there was no evidence indicating that the three men were legitimate military targets, and “there were no US or Yemeni forces or military objectives in the vicinity that were in need of protection against three young Yemeni men.”

According to their claim, the drone operator appeared to have waited until Salem and Waleed joined the men to strike, indicating a violation of international law since there was “ample opportunity to strike when the men were (1) alone in the Yemeni countryside where they could be targeted without fear of civilian casualties or (2) in locations where Yemeni officials could easily take them into custody."

The opinion dismissing these charges (which can be read in full here) states that federal courts cannot make determinations on actions carried out by the executive branch of the government, thereby dismissing all of the charges brought forth by Faisal.

'Plaintiffs will no doubt find this result unjust, but it stems from constitutional and pragmatic constraints on the Judiciary'

“Plaintiffs will no doubt find this result unjust,” the opinion reads, “but it stems from constitutional and pragmatic constraints on the Judiciary. In matters of political and military strategy, courts lack the competence necessary to determine whether the use of force was justified.

“The complex, subtle, and professional decisions as to the . . . control of a military force are essentially professional military judgments, subject always to civilian control of the legislative and executive branches. The ultimate responsibility for these decisions is appropriately vested in branches of the government which are periodically subject to electoral accountability.

“…It is the Executive, and not a panel of the DC Circuit, who commands our armed forces and determines our nation’s foreign policy…Courts are not constitutionally permitted to encroach upon executive powers, even when doing so may be logistically, if not constitutionally, manageable.”

The opinion of the three circuit court judges cites a previous case where the US struck a factory in Sudan in 1998 that it believed produced chemical weapons.The factory’s owner, however, claimed that the facility manufactured medicine and he brought a suit against the American government for wrongfully targeting the plant, resulting in considerable financial losses.

The DC circuit court dismissed his case as well, on the grounds that, “the courts cannot assess the merits of the president’s decision to launch an attack on a foreign target”.

Seeking an apology, not money

On the evening of Salem and Waleed’s death, according to testimonies in court, a Yemeni official spoke by telephone with several members of the bin Ali Jaber family, including Faisal, to “convey personal condolences for the wrongful deaths of Salem and Waleed,” but did not officially acknowledge the strike.

'If judges will not check this outsized power, then who will?'

Faisal first lobbied the Yemeni government to publicly acknowledge the wrongful death of Salem and Waleed. The government instead handed out $55,000 as a condolence payment to the families of those killed, according to testimony. This was followed by $100,000 in cash bound with rubber bands and offered to a relative of Salem by a member of Yemen’s National Security Bureau who stated that the money was from the US government.

But Faisal is not seeking monetary compensation. He wants an apology from the US government and a public acknowledgement of his relatives’ wrongful deaths.

Brandon Bryant, Cian Westmoreland, and Lisa Ling, Air Force and Air National Guard technicians who have previously worked on drones and military intelligence equipment, endorsed Faisal’s lawsuit and shared their knowledge of the drone programme with the court.

In their 17-page filing, they describe the case of Salem and Waleed as one among many where top-secret drone strikes mistakenly led to the deaths of unknown victims who are subsequently labelled “enemy kills”.

Included under the court’s official decision is a supplementary opinion by Judge Janice Rogers Brown, who offers critiques of the balance between executive and judicial powers. According to her: “This begs the question: if judges will not check this outsized power, then who will?”

She acknowledges that Congress alone cannot be relied on to manage the drone programme, adding, “…congressional oversight is a joke, and a bad one at that.”

“Democracy is broken,” she added.

Human rights group Reprieve, which helped Faisal file the case, says it is “weighing its options” to help the plaintiffs with an appeal through the Supreme Court that could override the legal precedents preventing federal courts from overseeing decisions made by the executive branch.

Since the deaths of Salem and Waleed bin Ali Jaber, the US has ramped up targeted strikes in Yemen. Although the drone programme was a favoured military strategy by former president Barack Obama, it has gained even more traction under the Trump administration.

Local sources reported on the night of 1 July that American-operated drones targeted and killed two alleged al-Qaeda members riding a motorcycle in Yemen’s Abyan province. Details about the strike, or its acknowledgement by the Department of Defense, have yet to be released.

As long as the US military continues to use drones in targeted attacks, then we must also ensure that innocent civilians, who will inevitably fall victim to remote strikes, have a way to seek recourse through the American justice system.

If we fail to provide families like the bin Ali Jabers with a simple apology that is clearly owed to them, then how can we expect to build trusted alliances with local communities that are so crucial in the fight against extremism?

- Hannah Porter is an independent researcher and journalist focused on Yemen and the Gulf. She is also a Master's student at the University of Chicago's Center for Middle Eastern Studies.

Photo: Yemenis gather around a burnt car after it was targeted by a drone strike killing three people - which reports have suggested were two suspected militants and a child - on 26 January 2015 between the Marib and Chabwa provinces, a desert area east of Sanaa. (AFP)