Kristian Coates Ulrichsen
Oman and Iran have had relatively good relations for decades, a recent upswing in collaboration may just be a continuation of that trend 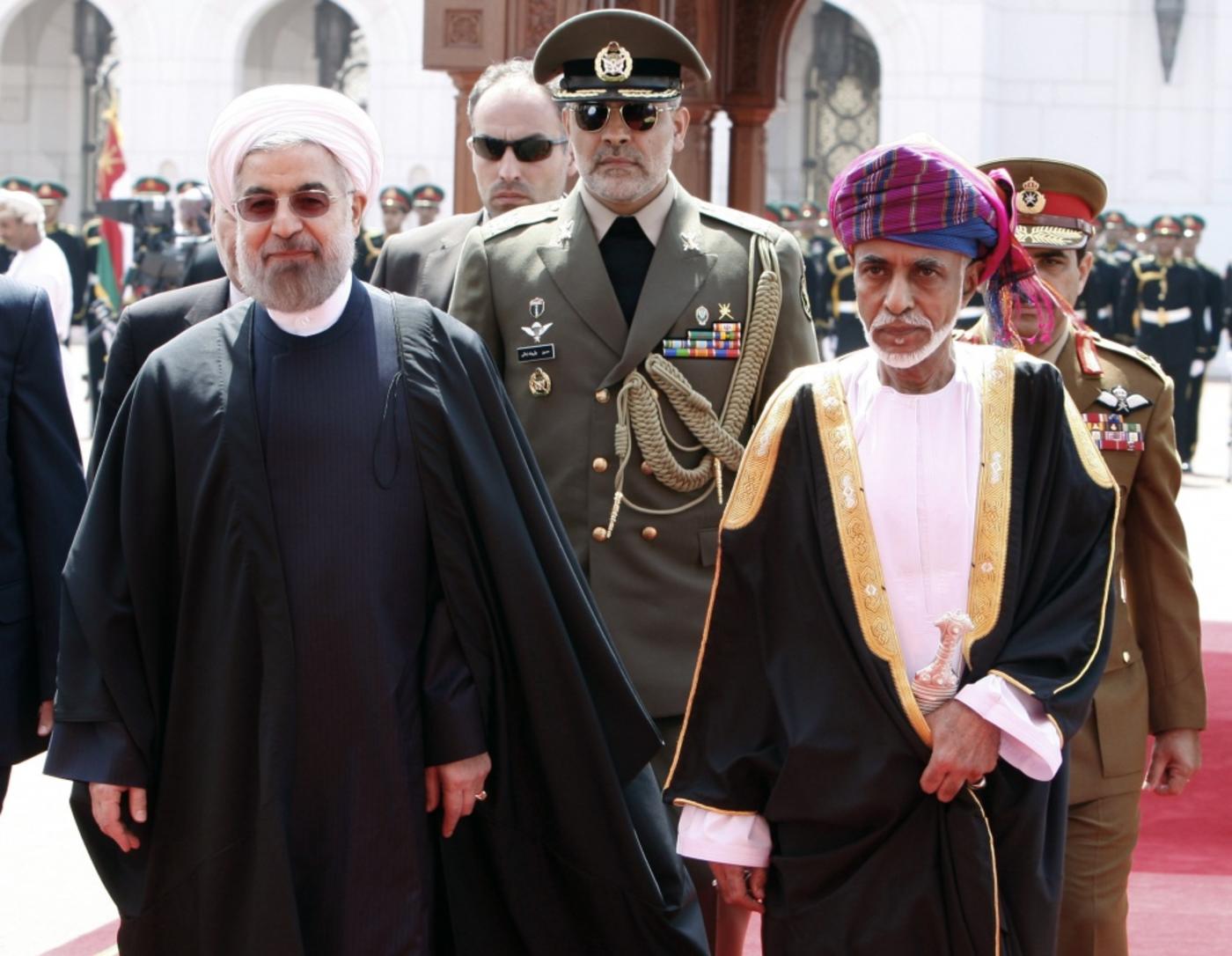 Ties between Iran and Oman have played a significant role in eroding Tehran’s regional and international isolation in recent months. Some commentators have labelled this a backdoor route to a Saudi-Iran rapprochement while others have interpreted it as Oman’s attempt to break away from Saudi hegemony.

In truth, neither is necessarily the case, and what we are seeing is more an evolution of decades-long ties, rather than a revolution on the Gulf’s south eastern shore.

The two countries’ bilateral relations are marked by a degree of historical depth and warmth that distinguishes Oman from all its fellow Gulf Cooperation Council (GCC) members, including Qatar.

A recent slew of joint initiatives between Oman and Iran has reinforced still further the Sultanate’s reputation as the great outlier within the GCC over issues ranging from regional integration to monetary union, as well as on Iran. Similar to Qatar, Sultan Qaboos of Oman has sought to balance regional and international interests, while creating room for policy movement, albeit in a much quieter and far less confrontational manner than the brash policies favoured by the former leadership in Doha.

Three developments over the past nine months have refocused attention on Oman’s role in facilitating Iran’s gradual and partial rehabilitation since President Hasan Rouhani succeeded Mahmoud Ahmedinejad in August 2013.

The first is the role of Omani mediation in hosting months of secret talks between senior US and Iranian officials in the months leading up to the negotiations in Geneva that yielded an interim agreement on Iran’s nuclear programme in November 2013.

The second is the series of joint Omani-Iranian naval drills that have taken place in the Gulf of Oman aimed at improving bilateral cooperation between the two countries.

The third is the March signing of an initial agreement to construct a $1bn, 350 kilometre gas pipeline through Iran’s Hormozgar province to the Omani industrial hub of Sohar.

The beginning of Qaboos-Iran relations

These initiatives are consistent with the longer-term contours of Oman-Iran ties during Sultan Qaboos’s long leadership and are nothing new. The tone was set early in the Sultan’s reign, which began in 1970, when the Shah’s Iran provided Oman with military assistance to overcome a decade-long rebellion in the eastern province of Dhofar.

Later, the Sultan was instrumental in hosting preliminary negotiations to end the Iran-Iraq war in 1988, and he continued to play a discrete mediatory role in securing the release of British Royal Navy personnel in 2007 and three American tourists held hostage in Iran in 2010 and 2011.

Sultan Qaboos also became the first Arab leader to visit Iran after Rouhani’s election and on 25 August he flew to Tehran to sit down with the Iranian Supreme Leader, Ayatollah Ali Khamenei. This was reciprocated in March this year when Rouhani chose Oman for his first visit to a GCC state as president.

A level of mutual familiarity and shared interests underpins each of the recent announcements and is a stark contrast to the intense suspicions about Iran’s regional objectives held by the other GCC states. Saudi, the UAE and Bahrain’s ruling Suni minority are currently the staunchest Iran critics, while Kuwait is slightly more conciliatory.

A song of oil or power

Speculation was rife during Qaboos’ August visit to Iran that Oman was playing a mediatory role between Iran and the United States. Meanwhile, the prospects of reaching a deal on the gas pipeline were raised in November 2013 by Iran’s Oil Minister, Bijan Zanganeh, who said Oman would become the “marketing centre” for Iran’s gas.

Oman has been looking to buy gas from Iran for many years, and the two countries actually signed a wide-ranging Memorandum of Understanding (MOU) on oil and gas cooperation in 2005. The MOU covered the joint development of Iran’s Kish gas field and the joint Henjam field, as well as the construction of a pipeline to export gas from Iran to Oman. However, the failure to reach agreement on gas pricing meant that the MOU did not evolve into a sale and purchase phase, and the two countries began to develop the shared Henjam field independently of each other.

With this backstory in mind, the initial agreement on a pipeline running underneath the Gulf should be viewed with a degree of caution. On paper, the initiative appears comprehensive and beneficial to both countries. Oman is slated to pay for the cost of the pipeline and related infrastructure but it will be compensated through revenues generated by gas sales. Iran, on the other hand, plans to invest in the petrochemicals sector in Oman’s new integrated port and Special Economic Zone at Al-Duqm in central Oman.

But not all may be as rosy as it seems. Multiple obstacles must be overcome before the pipeline is built, let alone before any gas flows through it. Economic, technical, and feasibility studies need to be completed, while the lingering impact of US-led sanctions on international companies dealing with Iran may also complicate the construction of the pipeline.

Despite initial successes, an agreement on gas prices remains elusive - as it has been in previous efforts to export Iranian gas to the Gulf. This most notably occurred back in 2010 when the Iranians cancelled a 2001 pricing agreement to supply the UAE through a Sharjah pipeline that was completed in 2008.

Oman’s hosting of US-Iranian dialogue and joint naval exercises resonate meanwhile with the country’s attempt to maximize its autonomy in regional and international policy. As a small state in a volatile region that has witnessed three major inter-state conflicts since 1980, such delicate manoeuvring has long formed the cornerstone of Omani foreign policy.

Badr bin Hamad al-Bu Said, then the under-secretary at the Ministry of Foreign Affairs, laid out the principals of this policy as early as 2003. In a speech in Brussels he outlines clearly his country’s views on small state actors in an age of globalization.

“We try to make use of our intermediate position between larger powers to reduce the potential for conflict in our immediate neighbourhood,” Bu Said said.

Comparing Oman to Norway, Bu Said insisted that “we can operate quietly without attracting too much attention’ by carving out a degree of relative autonomy from more powerful regional and international powers“.

The growing tensions between Oman and Saudi Arabia over the future of the GCC fall within this delicate balancing of competing regional and international interests. Oman has for years been a largely peripheral member of the six-nation GCC. In 2007 it became the first country to opt out of the proposed Gulf single currency and since 2011 has opposed Saudi plans to "upgrade" the organization into a Gulf Union.

This determination to retain control over key aspects of sovereignty culminated in an uncharacteristically public series of confrontational statements in late 2013, ahead of the annual GCC Summit in Kuwait. As speculation mounted that closer integration would be on the summit agenda, Oman’s Foreign Minister, Yusuf bin Alawi, stated publicly that: “We are against a union.”

“We will not prevent a union but if it happens we will not be part of it,” he added.

The ultimate outcome is that a recent spate of high-level meetings, military exercises, and pipeline announcement do not in themselves amount to a game-change in regional geopolitics. Oman has never been a core GCC state and has always sought to follow its own path. As such, it can hardly be said that Oman’s recent policies represent an attempt to "break away" from a GCC "sphere of influence", nor is Oman being "exploited" in any way as a way of improving Saudi-Iranian ties.

Rather, the moves are entirely consistent with the longer-term tenets of Omani foreign policy and reflect its accommodating and cautious nature. If anything, the recent coalescing of a harder-line "inner core" of GCC members Saudi Arabia, Bahrain, and the UAE on Arab security issues is likely to further marginalise Oman within the organisation and lead to further opportunities for bilateral ties with Iran as the Sultanate adapts pragmatically to changing regional circumstances.

- Kristian Coates Ulrichsen is a Research Fellow at Rice University’s Baker Institute for Public Policy and an Affiliate Faculty at the Henry M Jackson School of International Studies at the University of Washington in Seattle.