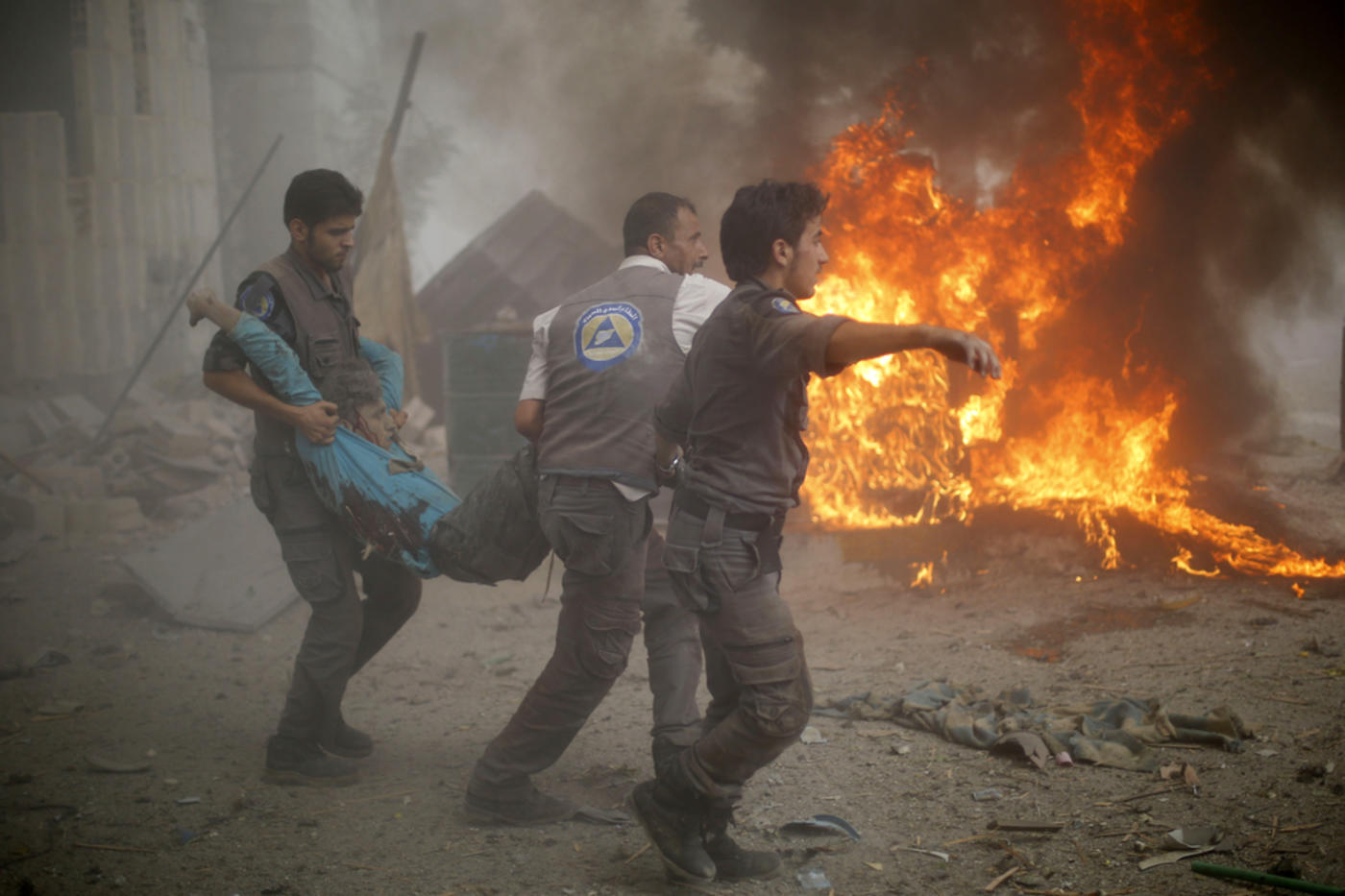 Last Sunday’s bombing by the Syrian government of a busy marketplace in the town of Douma, killing at least 112 of its own citizens, was one of deadliest attacks in an ever-more-devastating conflict. The four strikes came during the busy midday period, as if to maximise destruction. Once again, we were confronted with haunting images of rooms filled with the bodies of the victims, many of them children, being prepared for burial.

Almost exactly 20 years ago, a similarly brutal bombing of a marketplace during the Bosnian war changed the course of that conflict. On 28 August, 1995, during its siege of the city of Sarajevo, forces of the breakaway Republika Srpska fired 5 mortar shells into the Markale market, killing 43 and wounding 75.

The horror and outrage generated by that attack - the second on the Markale market, following a 5 February, 1994 strike that killed 68 - unified much of the international community into action. Several of the main Serbian officers implicated in the two market shellings, including Generals Stanislav Galic, Dragomir Milosevic, and Momcilo Perisic, were later tried by the International Criminal Tribunal for the Former Yugoslavia for their role in the market shellings. Galic was sentenced to life in prison for crimes against humanity during the siege of Sarajevo.

Sadly, it seems unlikely that the horror of the latest market attack in Douma will bring about any effective international response. The attack received widespread media coverage, but faded almost immediately. Instead of becoming a game changer like the Markale market killings, Douma seems destined to become yet another grim marker in a conflict drowning in so many grim markers that even those who follow it closely have trouble remembering them all. In the meanwhile, the civilian population of Syria continues to suffer and die, almost bereft of any hope out of this ever-more brutal conflict.

Let’s be honest. Most of the world is looking away from what is happening in Syria. They no longer read the latest horror news stories, and zone out when Syria comes up in the TV news. Most news organisations are well aware of this so are reporting less on Syria. Syria and much of the Middle East seems like a place of endless, irresolvable conflict, a graveyard of failed attempts to stop the bloodshed.

But that apathy and resignation to failure is a response the world cannot afford when it comes to the crisis in Syria, and the broader region. The consequences of a further meltdown of the Middle East cannot easily be contained to the region, as is clearly evident from the spreading insecurity and instability, the increasing refugee flows out of the region, and the growing threat posed by ISIS-inspired attacks.

Human rights and the laws of war

It is high time to focus on protecting civilians and ending the widespread atrocities that fuel this conflict. It is encouraging that the UN special envoy for Syria, Staffan De Mistura, has become increasingly vocal in condemning violations of the laws of war such as the Douma market bombing.

Emphasising respect for human rights and the laws of war during a conflict as brutal as the Syrian civil war may seem like pie in the sky, but it is in fact a fundamental building block toward ending the armed conflicts raging in the region. The only way out of the vortex of nihilistic violence is to establish a society where everyone  - regardless of ethnicity, religion or political views - feels secure and has reasonable hope for a better future for themselves and their children.

One very concrete way to assist those affected by the Syrian conflict is for the Security Council to act on its own resolutions calling for indiscriminate attacks to stop. The Security Council should impose an arms embargo on the Syrian government and other warring parties committing systematic and widespread abuses, and it should refer the situation to the International Criminal Court so that those responsible for crimes like this week’s strikes on Douma fear ending behind the dock. The monitoring and attribution system put in place by the Security Council to establish responsibility for any chemical weapons attacks in Syria should be expanded to monitor and establish responsibility for all indiscriminate attacks in the conflict. Finally, the Security Council should impose targeted sanctions on the individuals responsible for serious violations of the laws of war, putting them on notice that they will be held accountable for their crimes.

Other countries should also provide fleeing Syrians with the safe refuge they deserve outside their brutalised country. Instead of using alarmist language about the “swarms” of migrants - as Prime Minister David Cameron of the UK recently characterised the situation - overwhelming Europe, Europe and the rest of the world should accept their legal and moral obligation toward those who are forced to flee their homes because of violent conflict or mass abuses, and create a fair and accessible asylum system that shares this responsibility equitably across nations.

Europe, let alone the world, is not being overwhelmed by refugees. Yes, the world is facing an unprecedented crisis of flight and displacement, caused by the conflicts the international community has failed to resolve, or in some cases had a direct role in creating. The number of asylum seekers arriving in Europe - 138,000 Syrians in all of Europe in 2014 - pales in comparison with the burden carried by neighbouring countries: in Lebanon alone over 1.1 million Syrians have sought refuge.

It is simply shameful for Europe, Australia, the United States, and other countries to refuse to shoulder their collective responsibility to assist people in desperate need, to force them to risk their lives to make it to Europe, and all too often to live in horrible conditions once they do make it into Fortress Europe.

The complexity of the conflict in Syria is no excuse to look away. Civilians in Douma like other civilians caught in conflict, be they in Sarajevo, Gaza, the Negev or Baghdad, deserve protection. There may not be an easy solution to each conflict, but there are always measures that can reduce civilian suffering.

International leaders need to remember that 20 years ago, the abuses in the Balkans also seemed impossible to end. And yet today, some of the main perpetrators of those atrocities are behind bars for their crimes. The scars of the Balkan wars have not all healed, and 20 years later many remain unable to return home. But the bloodshed has ended, and many have returned to their ordinary lives.

The conflicts in Syria and the broader Middle East are of a scale far vaster than the Balkan wars, granted. But so are the consequences of an international failure to bring the crimes to an end.  As with 20 years ago in the Balkans, a much more determined international effort is needed. Human Rights
The silencing of the Douma Four: Still missing, one year on