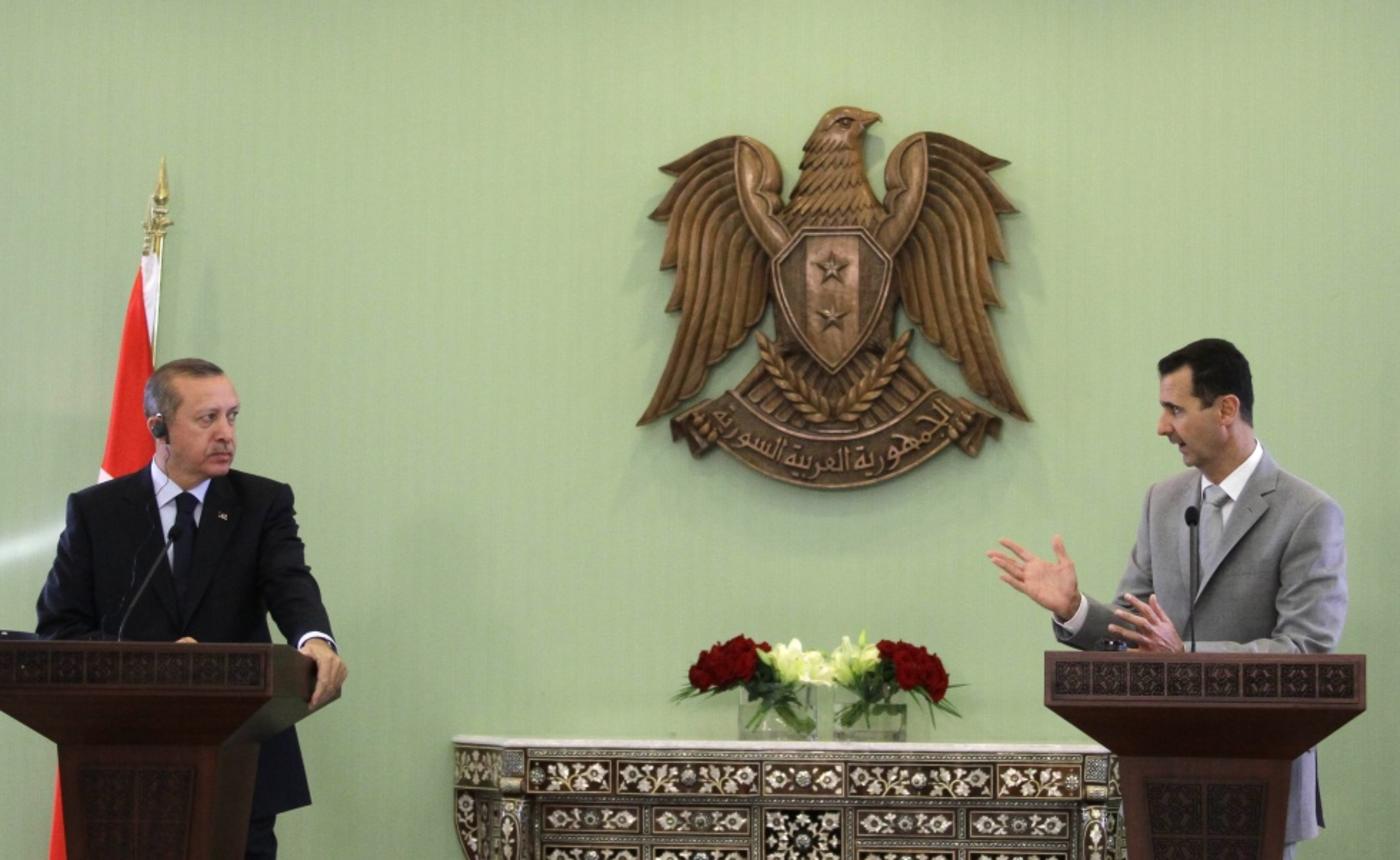 Having predicted three years ago that Syrian President Bashar Al-Assad would soon fall, Turkey’s Prime Minister, Recep Tayyip Erdogan, is having to come to terms with the collapse of his Syria policy.

Erdogan now faces two choices: does he back off or does he raise his confrontation with Assad to a new level in an attempt to snatch victory from the jaws of impending defeat?  His opening of a new front across the Syrian border during the March Turkish election campaign, and the shooting down of a Syrian plane allegedly violating Turkish air space, would seem to indicate that for Erdogan the war is far from over.

In late March as Syria was accusing the Turkish government of backing a jihadist assault on the largely Armenian town of Kassab, a top-level conversation involving the Turkish Foreign Minister, Ahmet Davutoglu, the head of the Turkish national intelligence organization (MIT), Hakan Fidan, the deputy chief of staff, General Yasar Gurel and a senior Foreign Ministry official, Feridun Sinirlioglu, was leaked to the media.

One issue they discussed was the possibility of launching a "false flag" operation against the tomb of Suleyman Shah, the grandfather of Osman, the founder of the Ottoman Empire. The tomb, 35 kilometres from the Turkish border, was formally declared to be Turkish property in the Treaty of Ankara, signed between France and Turkey in 1921. In the conversation, Fidan offers to send four men across the border and launch a missile attack that could be used as the pretext for direct Turkish intervention in the name of protecting the tomb. The Turkish government attempted to drown out the explosive contents of the conversation with outrage at the breach of security, but at no stage did the government deny the veracity of what was said.

This revelation was followed by Seymour Hersh’s allegation in a recent London Review of Books that the sarin gas used in the chemical weapons attack on the outskirts of Damascus last August was provided by the Turkish government as part of a plan to push US President Barack Obama over his own red line, in order to encourage the Americans to order a direct military attack on Syria.

Up to 2011, Erdogan regarded both Libya’s Muammar Gaddafi and Assad as “brothers”. Relations with Syria, in particular, had never been better. The turning point was the so-called Arab Spring. With the US, Britain and France poised to attack Libya, Erdogan warned that military intervention anywhere in the Middle East would be disastrous. However, once command of the assault on Libya was transferred from the US to NATO, Turkey was involved whether it liked it not. It soon came in behind the attack by providing naval and aerial support.

Both Erdogan and Davutoglu seem to have read the "Arab Spring" as an opportunity to establish Turkey as the leader of a Middle East emerging from the chrysalis of authoritarian rule. With Gaddafi in the process of being ejected, they positioned themselves in the front rank of the international collective mobilising against Assad. They claimed to have done everything they could to talk him into introducing political reform but, according to Syria’s Foreign Minister Walid al-Muallim, the core of Turkey’s "advice" was Erdogan’s insistence that the Syrian government enter into dialogue with the Muslim Brotherhood.

“We kept telling them that the disagreement between the Syrian regime and the Muslim Brotherhood goes back to the 1980s and cannot easily be resolved,” Muallim told Turkish newspaper Hurriyet in 2012.

With Assad refusing to take their advice, Erdogan and Davutoglu finally committed themselves to the effort to drive him out of power by supporting both the self-styled Free Syrian Army (FSA) and the Syrian National Council (eventually to be superseded by the Syrian National Coalition). They cut relations with Syria, imposed sanctions and ended cross-border trade, affecting not just Syria but goods being transported to and from the Gulf. The FSA used southeastern Turkey as a launching pad for attacks across the border and as the conflict metastasized, jihadis from around the world flew into Istanbul to join in.

The attack in Kassab appeared to be an attempt to open a new front in northern Syria, following a string of successes by the Syrian army culminating in the recent capture of Yabroud on the Lebanese border. At the moment, Assad’s forces are making gains across Syria, including In northern Latakia where they appear to be closing in on the jihadi-held town of Kassab, just south of the Turkish border

In the assault on the Syrian regime the motives of the US, Israel and Saudi Arabia were clear — the wish to degrade Iran’s most important regional ally. What Turkey expected to gain from this adventure though is far less clear. So far there has been severe material loss and no perceptible gain: 700,000 refugees on the Turkish side of the border; jihadi bombings in the town of Reyhanli last May that left 52 people dead; threats of further bombings; the establishment of Kurdish autonomy in northeastern Syria, next to the Kurds on the Turkish side of the border; and the disruption of relations with Syria’s allies, notably Iraq, Iran and Russia.

The answer to this conundrum might lie in Erdogan’s psychology. He has said many times that Assad would soon be gone but three years later, not only is Assad still there, but he is winning the war. Here is a Turkish prime minister who won three elections in a row and even tamed the Turkish military but is now being defied and checkmated by a Syrian president he treated like a wayward Ottoman governor. Erdogan’s Syria policy is on the point of collapse, yet there is no sign that Turkey’s thwarted Prime Minister is willing to back off, let alone admit defeat.

— Jeremy Salt is a former journalist, turned academic. He is based in the Department of Political Science and Public Administration, Bilkent University, Ankara where he teaches courses in modern Middle Eastern history and propaganda. His most recent book is The Unmaking of the Middle East. A History of Western Disorder in Arab Lands (Berkeley: University of California Press, 2008.)