Nafeez Ahmed
Unless “British values” are to be equated with warmongering, corporate-profiteering and xenophobia, The Sun’s cheerleading for the latest European war agenda for Libya could mean the tabloid finally gets shut-down. Fingers-crossed! (Thanks Theresa!) 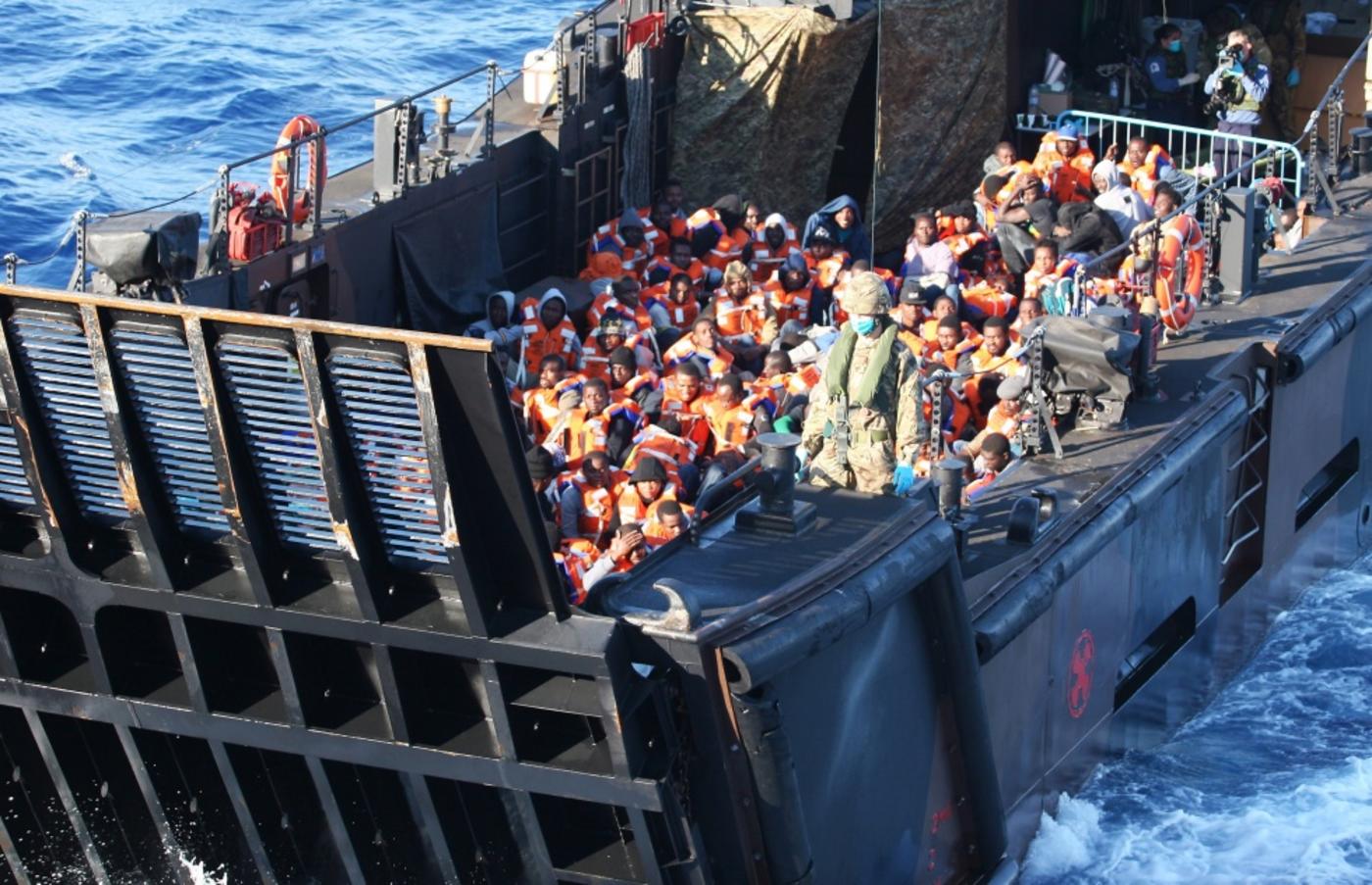 When The Sun’s homegrown violent-extremist-in-residence Katie Hopkins calls for “gunships” to be used against migrant boats carrying starving, desperate men, women and children from Libya, you don’t expect her nutty ideas to be taken up enthusiastically by senior government officials in Europe.

Comparing immigrants to “cockroaches” who spread like the “novovirus,” she urged that asylum seekers should be threatened “with violence until they bugger off”. Otherwise, British towns will remain “plagued by swarms of migrants and asylum seekers”.

As if on cue, Britain, France, Italy, Spain and Lithuania duly obliged, by clamouring on behalf of the European Union to receive UN authorisation for their proposal last month to “identify, capture and destroy vessels before they are used by traffickers”.

The initiative has been painted as a humanitarian gesture to stop traffickers after a migrant boat capsized in the Mediterranean, drowning more than 700 migrants.

Retired General Leonardo Tricarico, a former head of the Italian Air Force, told told the US news agency, Defense News, that he strongly backed such military strikes. Hitting boats used by smugglers before they are loaded with passengers would be “simple” using munitions launched by drones.

“You would need excellent intelligence in Libya, which Italy has,” Tricarico added. Defense News noted that: “Italy’s intelligence network in Libya derives from its oil interests in the country and traditional trade links.”

But after briefing the UN Security Council on the plans, EU foreign policy chief Federica Mogherini insisted: “No one is thinking of bombing. I’m talking about a naval operation” – although it still remains unclear how a naval operation would peacefully destroy potential migrant boats.

For Hopkins and her supporters, the lives of such migrants simply have no value. They are not British or European or white. They are foreign, black African, Muslim sub-humans whose lives have no worth or value, illustrated by their purported inability to “get creative” in making “a better life” for themselves “in North Africa”.

Whitewashing the massacre of 50,000 civilians

Apart from the open racism of this sort of view, more insidious is Hopkins’ self-serving obfuscation of the root causes of immigration, as if the devastation of North Africa has nothing to do with ‘us’ lovely “British taxpayers”.

Yet we “British taxpayers” have been subsidising the very forces preventing North Africans making a better life for themselves at home.

The most recent escapade, of course, was the 2011 war on Libya. I say “war on Libya,” because contrary to the conventional mythology of a precision-guided humanitarian war to save Libyans from Col. Gaddafi’s brutality, the NATO military intervention deliberately destroyed the country.

You wouldn’t know that from reading The Sun, whose exemplary  “war journalism” amounted to simply offering NATO free advertising space - dressed up as “news”.

NATO’s own data for 2011 showed that out of 9,700 NATO strike sorties in Libya, about 6,000 were aimed at military targets, leaving a full third aimed at civilian targets.

An official UN inquiry investigated a small sample of just 20 NATO airstrikes, finding that five of the strikes had killed a total of 60 civilians, and injured a further 55.

The UN inquiry confirmed that witness testimony and physical evidence at the targeted sites contradicted NATO’s claim that four of the five sites were used for military purposes as command and control nodes, or troop staging areas. Despite NATO failing to offer an explanation of these attacks, the UN commission still inexplicably concluded that NATO “did not deliberately target civilians”.

But in doing so, it ignored the implication of its own data. The inquiry confirmed that NATO had actually flown about 17,900 armed sorties in Libya. The UN commission generalised selectively about the entire operation from close study of the sample of 20 NATO strikes, but conveniently overlooked the implication of having confirmed NATO’s targeting of civilians on a false military pretext.

Assuming, as the UN commission did, the representative nature of the 20 NATO strikes, its findings indicate 60 civilians killed for every 20 strikes - that is, an average of 3 civilians killed per strike. At 17,900 strikes, we can calculate an upper estimate of approximately 53,700 civilians killed by NATO’s precision bombing.

More conservatively, the UN’s evidence shows that five out of 20 strikes – one in four – targeted civilians, mostly on the false pretext of aiming at military targets. NATO’s own 2011 data further suggests that only two-thirds of its targets are military, leaving another third as explicitly civilian. This would suggest that at least one third plus one quarter – about three out of five – of all strikes were explicitly targeting civilians. Out of 17,900 strikes, that would mean around 11,000 strikes killing roughly 3 civilians per strike, giving a lower estimate of 32,000 civilians killed by NATO.

Thus, although a prima facie (at first encounter) analysis of its own data supported a civilian death toll estimate of between 32,000 and 53,700 Libyans, the UN inquiry simply whitewashed these war crimes.

In May 2011, Britain’s top military commander General Sir David Richards proposed that NATO should “be freed from restraints that precluded attacking infrastructure targets”.

What he meant was that NATO shouldn’t need to abide by the “restraints” of international law under the Geneva Conventions. Not a peep of complaint from The Sun.

Christian Balslev-Olesen, UNICEF Libya’s head of office, warned that due to disruption of the GMR, the capital city, Tripoli, faced “an absolute worst-case scenario” that “could turn into an unprecedented health epidemic” without resumption of water supplies.

Pro-rebel sources attempted to blame Gaddafi loyalists for the disruption of Libya’s water supply, but UNICEF officials had already confirmed that Libyan government officials were not sabotaging water facilities, but in fact working closely with a UN technical team to solve the water crisis.

Nevertheless, by September, UNICEF reported that the disruption to the GMR had left four million Libyans without potable water – it remains disrupted to this day.

Cashing in on catastrophe

The World Bank and IMF were promptly asked by the NATO-installed National Transitional Council (NTC) to “examine the need for repair and restoration of services in the water, energy and transport sectors” – the very same that NATO had bombed. The idea was to invite Western private contractors to profit handsomely from lucrative reconstruction contracts, a tried-and-tested strategy that had reaped corporate dividends in other warzones like Iraq and Afghanistan.

Gaddafi had been a nuisance, the New York Times observed, “frequently raising fees and taxes and making other demands. A new government with close ties to NATO may be an easier partner for Western nations to deal with.”

After the US lifted sanctions in 2004, Gaddafi had renegotiated the share of oil for US and European majors, from around 50 percent to as low as 12 percent.

Opposition forces, intelligence agencies confirmed, were strongly tied to al-Qaeda and other violent Islamist groups, which were also linked to militant Islamists in Iraq and Syria. It is therefore no surprise that the “Islamic State” (IS) now has a stronghold in post-NATO Libya.

The downside is that the chaos has jeopardised the interests of Western oil majors and contractors, causing the US State Department last February to lament the collapse of Libya’s oil production, and the civil war’s negative “economic impact”.

As the collapse of post-NATO Libya has accelerated, so have the number of migrants trying to escape the Mediterranean to the shores of the European powers, which had claimed to be saving them.

Now that the villain is IS, not Gaddafi, the Britain-led EU plan for a new military intervention under the guise of “gunboat diplomacy” is all about stopping those victims from escaping the violent extremists we “British taxpayers” helped NATO install.

Counter-extremism to the rescue

Thankfully, there appears to be a glimmer of light flickering beguilingly at the end of the tunnel.

This morning, UK Home Secretary Theresa May helpfully explained the government’s exciting - if slightly vague - plan to ban “hate speech” by “extremists” that would undermine “British values” like tolerance, equality, the rule of law, and so forth – including shutting down premises used to promote “extremism,” and vetting the online communications of extremist groups and individuals via Twitter, Facebook and so on.

Under these illustrious proposals, along with other powers recently obtained, the British public can at last look forward to the imminent day when Katie Hopkins will be duly deported after the confiscation of her passport, hopefully to somewhere like Libya where she can witness her version of “British values” in action.

The good news is that today’s Sun frontpage, with surprising nobility and humility, endorsed the Tory counter-extremism proposal under the fitting headline “WAR ON HATE.”

No doubt, once the envisaged powers pass into law, The Sun will gladly hand Hopkins over to the UK Border Agency, voluntarily close down its office, invite the police to vet all its online communications, and apologise for radicalising vast numbers of Britons into hating and disrespecting immigrants, ethnic minorities, asylum seekers, and women.

Photo: A landing craft prepares to dock onto HMS Bulwark after rescuing around 100 migrants, 13 May (AFP) 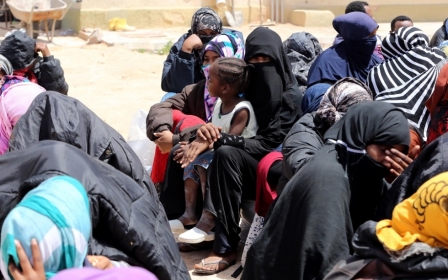 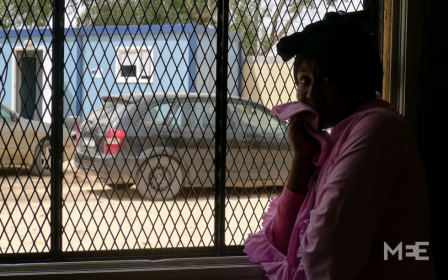 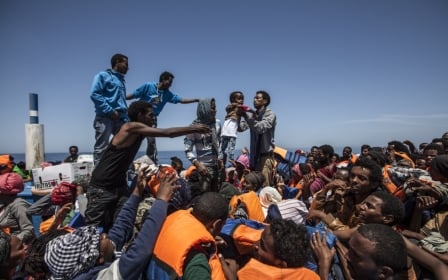