How Tunisia survived its own revolution - and the questions that remain

Soumaya Ghannoushi
Tunisia has done well to weather the turbulence of the past six years - where does it go from here? 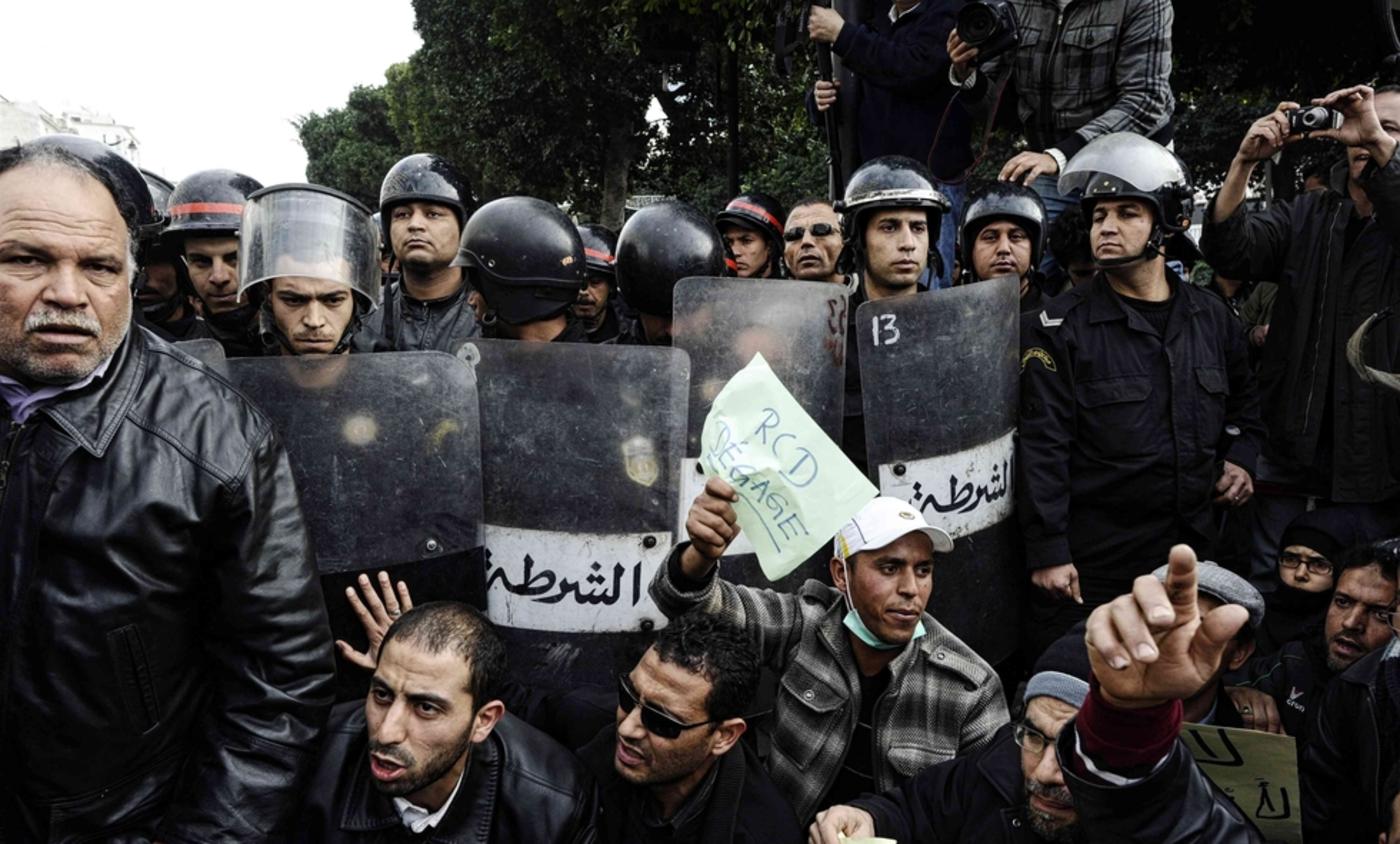 Six years ago, in a small Tunisian provincial town called Sidi Bouzid, an errant merchant named Mohamed Bouazizi stood outside a police station, poured kerosene over his frail body and set it ablaze.

Little did this young man know that his act of sheer fury and desperation would shake the edifice of the authoritarian regime that had ruled his homeland with an iron fist for 23 years to the core, igniting a popular revolt that would topple its dictator and resonate far and wide across the region.

Notwithstanding the all too common tendency to glorify or denigrate the Tunisian revolution, we do need to pause and examine its labyrinthine trajectory and assess its complex outcomes, its failures and successes, as well as the dangers with which it is still beset.

The value of compromise

Six years since Tunisia’s dictator Zine El Abidine Ben Ali boarded a plane and fled to Saudi Arabia in the dead of night, his country’s political landscape has changed beyond recognition. Tunisians today enjoy a range of rights and liberties unprecedented in their history, from freedom of belief, thought and expression to association and congregation.

They have a progressive constitution that guarantees these public and individual rights, a democratically and freely elected parliament and a remarkable set of power checks and balances.

Tunisians have striven to resolve their political differences peacefully through compromise, away from violence and exclusion

These include a gamut of elected bodies that work to ensure the transparency of presidential, legislative and municipal rounds of voting, as well as the freedom and independence of the media and the judiciary. There is also a committee, known as the Truth and Dignity Commission, which is tasked with overseeing the process of transitional justice.

Against the odds, Tunisians have managed to overcome the dangerous political crisis which erupted in 2013, when two opposition leaders were assassinated following the Egyptian military coup, thereby threatening to end the country’s nascent democratic experiment.

This led to the Troika, which ruled the country at the time and was composed of Ennahdha, the winner of the 2011 elections, in alliance with two smaller parties. Instead it ceded power to an independent caretaker government, in the framework of a national dialogue led by the major organisations within Tunisian civil society, of which the National Workers Union (UGTT) was foremost.

Tunisians have striven to resolve their political differences peacefully through compromise, away from violence and exclusion. This is what distinguishes their post-revolution story and justifies talk of a “Tunisian exception”.

The process of political compromise was not so much a choice as a necessity, dictated by the new regional balance of power generated by the Egyptian military coup and collapse of the “Arab Spring”.

It was initiated by a meeting that took place in Paris between Rached Ghannouchi, the leader of the ruling Ennahdha party, and his arch-enemy at the time, the current Tunisian president, Beji Caid Essebsi. It culminated in a batch of agreements that served to end the stifling political deadlock.

How Tunisia avoided a sad fate

A number of factors have so far spared Tunisia the sad fate of other Arab Spring countries.

Some are to do with the country’s location. Tunisia’s burgeoning democracy has enjoyed relative geographic cover, largely because this north African country is remote from the central conflicts of the Middle East, with their pressures and constraints, particularly those related to the Arab-Israeli conflict.

Tunisia’s burgeoning democracy has enjoy relative geographic cover, largely because this north African country is remote from the central conflicts of the Middle East

The cohesiveness of Tunisian society and absence of vertical divides - whether they are religious, sectarian or ethnic - has significantly facilitated the process of democratic transition. Political differences between Tunisians tend to remain within their proper political and ideological contexts, without metamorphosing into tribal, sectarian or racial polarisations, as they have done in Syria, Iraq or the Yemen, for example.

There is also the relative spread of education, the size of the middle class and the strong traditions of party politics and civil society, despite a legacy of political oppression.

That the country has no tradition of military intrusion in its politics has also been key to safeguarding its democratic transition. Its first post-independence president, Habib Bourguiba was wary of the role that the army played in Iraq, Syria, and Egypt, and sought to keep the army far from the corridors of power.

READ: The voices of Tunisia's repressed echo across a region still under tyranny

This has resulted in a political life autonomous from military institutions, even under Bourguiba’s patriarchic reign. It stands in sharp contrast to Egypt, where politics has been dominated by officers and generals since the era of Mohamed Ali in the 19th century.

Neither can we gloss over the key role played by Tunisia's major political forces. Foremost of these has been Ennahdha: despite a stifling political crisis, it renounced power and the electoral legitimacy it enjoyed to advance the process of national dialogue and pave the way for political consensus.

All this, however, should not blind us to the very serious threats, internal and external, imperilling the survival of Tunisia’s young democracy.

Its regional environment is one of chaos, with lawlessness and collapsed state structures in Libya on its southern border and rampant terrorist and violent groups, which dealt a heavy blow to Tunisia’s tourist industry a year and a half ago.

More worrying is the high threshold of Tunisians’ expectations and growing sense of entitlement, running up against the slow pace of economic development, particularly among the country’s increasingly disillusioned graduates and in the marginalised impoverished inner provinces.

This lack of economic progress means that Tunisian democracy, in spite of its impressive political achievements, is crippled, struggling to keep its balance and remain standing on one leg.

This is made all the more strenuous by the fierce regional axis, spearheaded by Egypt and a cluster of Gulf sheikhdoms, which is seeking to undermine Tunisia’s political transition in order to prove that democracy is undesirable, if not altogether unattainable, in this part of the world.

This camp has been reinforced with the election of Donald Trump, who is expected to pursue a policy of supporting Arab dictatorships and autocracies under the banner of “political realism” and securing stability in the Middle East.

READ: The $14 billion that could keep Tunisia on the path of democracy

The fragmentation marking Tunisian political life and affecting Nidaa Tounes, the ruling party in particular, which continues to be plagued with internecine feuding and chronic schism is another problem. This uncertainty has further emboldened opponents of change and their bid to bury what remains of the Arab Spring, thereby finally drawing a line under democracy in the region.

What seems certain, nonetheless, is that Tunisians have become adept in the art of intricate political compromise. They have so far managed to resolve their main political dilemma: the problem of power and how politics may be managed. This remains the greatest dilemma in an Arab hemisphere still governed by crude, brute dictatorship.

The main challenge facing Tunisians is an economic one: how can they distribute wealth equitably among their country’s regions and rescue the long-forgotten inner provinces from decades of marginalisation and poverty.

The question they face, and on which hangs the fate of their democracy, is how can they translate the great slogans of dignity and social justice into development, opportunity and hope, so that the poor and downtrodden may finally taste the fruits of their revolution.

Photo: Protesters stand in front of policemen during a demonstration Tunis on January 19, 2011 (AFP)