Trita Parsi
Unlike with Pyongyang, America’s allies in the region are not interested in a diplomatic solution to the Iran issue 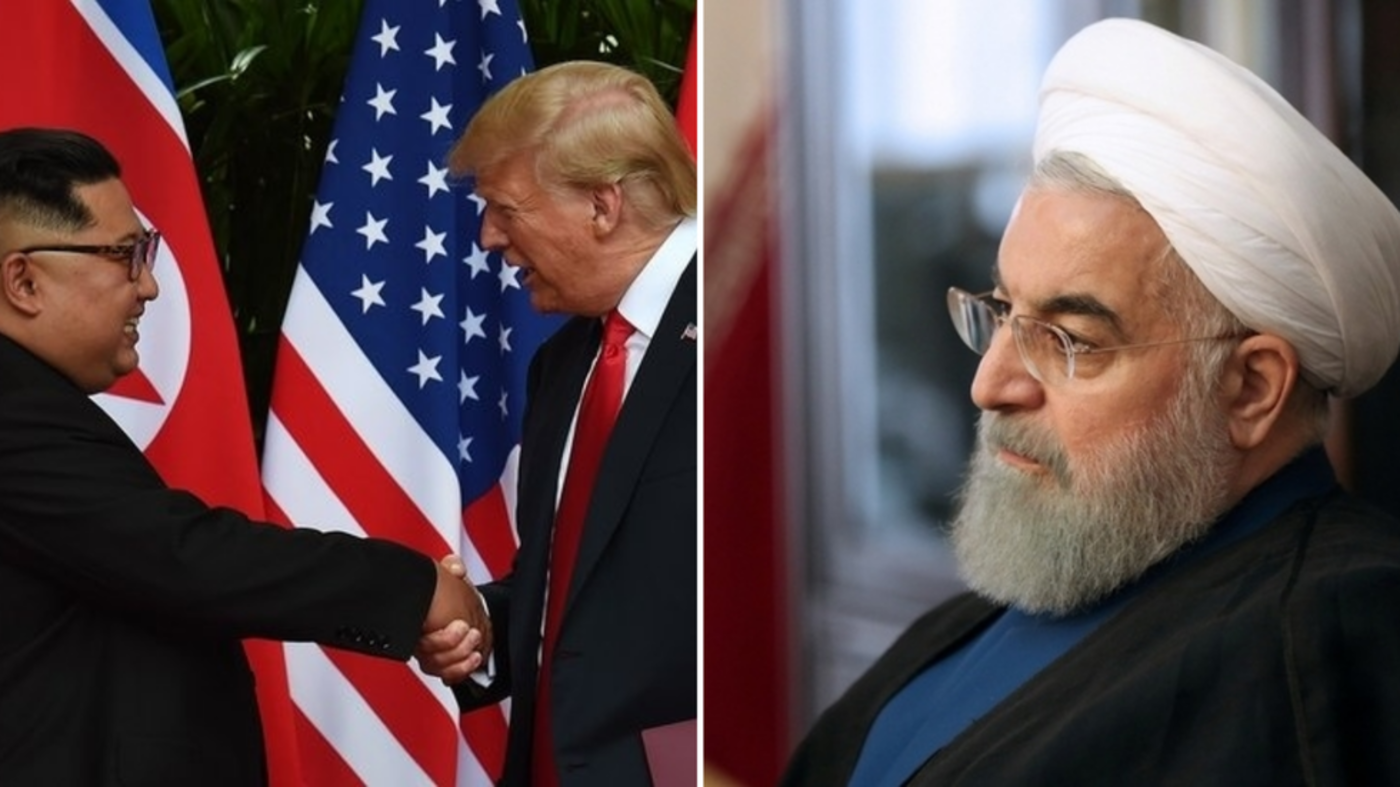 As US President Donald Trump returns from a successful photo-op in Singapore with North Korea's Kim Jong Un, his focus will soon return to Iran. Israel and Saudi Arabia have eagerly hoped that the Singapore summit would help neutralise the Korean issue so that Trump could turn all his energy towards Tehran.

Yet no one seems to know what Trump's Iran policy actually is. Is he looking for another deal? Is he paving the way for war? Is regime change the real goal? If Saudi Arabia and the UAE decide, it will be none of the above – it'll be much worse.

Trump loves to keep the world guessing. He has a national security adviser – John Bolton – who has been pushing the US to bomb Iran for more than decade. A key supporter of the disastrous Iraq war – which he still claims was a success – Bolton has also propagated US-sponsored regime change in Iran, going as far as carrying water for the Iranian terrorist organisation the Mujahedin-e Khalq. In fact, the former Saddam Hussein-funded terrorists pay him $40,000 per speech he gives in their support.

In Secretary of State Mike Pompeo, Trump has another hawk who has flirted with military action against Iran, while upholding a veneer of interest in diplomacy. Yet, his infamous 12 demands of Iran were not an invitation for negotiations but rather a diktat for capitulation.

Even the more mild-mannered Rex Tillerson, his former secretary of state, hinted on a few occasions that the real goal of US Iran policy was regime change, suggesting that this objective originates with Trump himself.

Iran is not North Korea and the depth of America's (at times, fabricated) animosity towards Tehran is incomparable to the more cartoonish image it has of its adversaries in Pyongyang

Trump himself has characteristically been all over the map on Iran. His confidence high after successfully shaking the North Korean dictator's hand, Trump told reporters that he was now getting ready to move on to score his next diplomatic success.

"I hope that, at the appropriate time, after the sanctions kick in - and they are brutal what we've put on Iran - I hope that they're going to come back and negotiate a real deal because I'd love to be able to do that but right now it's too soon to do that," Trump said.

But Iran is not North Korea and the depth of America's at times fabricated animosity towards Tehran is incomparable to the more cartoonish image it has of its adversaries in Pyongyang. It's not even been a year since the North Koreans returned the tortured body of American student Otto Warmbier. Yet, Trump heaped praise on Kim, saying it was an "honour" meeting him and calling the dictator "a very talented man" with a "great personality".

In contrast, while a reprehensible act, none of the American diplomats taken hostage in Iran 40 years ago were killed. Yet the scar of the hostage crisis continues to run deep in the American psyche and some elements appear to wish to keep it open.

This is one of the main differences between the US-North Korea and US-Iran conflicts: while America's regional allies in the former conflict seek to avoid war and favour a diplomatic solution, US allies in the Middle East oppose negotiations in the latter conflict. In fact, they have played an important role in keeping the US-Iran enmity alive.

Which then raises the question: what do Saudi Arabia, Israel and the UAE - the three countries cheerleading Trump's confrontational policy with Iran - want?

Contrary to the rhetoric of these countries, their main problem with Iran is not the nature of its regime, but rather its power and its ability to shift the balance of power in the region against their interests. An Israeli intelligence officer admitted to me in 2009 that a potential victory of the Iranian Green Movement would be "Israel's worst nightmare” as it would enable Iran to break out of its isolation and expand its power further.

The pursuit of regime change may in reality be an avenue to achieve a far more sinister objective: A civil war in Iran that could either lead to Iran’s dismemberment or at a minimum, a prolonged state of debilitating instability

Similarly, the Netanyahu government's opposition to the Iran nuclear deal had little to do with the details of the deal and more to do with how the deal signalled an end to almost four decades of America's policy of containing Iran. With the sanctions lifted and Iran on a path towards political rehabilitation, the United States was succumbing to Iran's rise rather than committing itself to reversing it.

Given this, regime change towards a stable democracy in Iran does not appear to be beneficial to Iran's regional rivals. Indeed, the idea that the crown prince of Saudi Arabia - who contends that there’s nothing wrong with an absolute monarchy - yearns for liberal democracy in Iran is preposterous.

If Iran had a proper democracy that respected the rights of the Iranian people and provided them with the freedom to realise their full potential, Iran's power in the region would arguably rise well beyond what it has so far achieved through taking advantage of America's regional missteps.

Such an Iran would be a far more potent rival to Saudi Arabia - a scenario Riyadh hardly wants to help bring about.

Instead, the pursuit of regime change may in reality be an avenue to achieve a far more sinister objective: a civil war in Iran that could either lead to Iran's dismemberment or at a minimum, a prolonged state of debilitating instability. While democratisation in Iran would not shift the regional balance in Saudi Arabia's favour, turning Iran into Syria would.

This may also explain Saudi Arabia's support for the MEK terrorist group. Riyadh surely understands that the MEK has no support inside Iran and that the prospects of it taking power in Iran is close to nil. From that perspective, Riyadh's investment in the MEK makes no sense. But the MEK can help spark an internal conflict in Iran and from that vantage point, Riyadh's investment in the terror group could serve a purpose.

Saudi Arabia may not be alone in viewing the promotion of instability in Iran as a path to shift the balance of power against Iran. Senior Israeli Mossad official Haim Tomer recently told the Jerusalem Post that Israel can and should promote regime change in Iran because "even if regime change does not succeed... it is better to have the Iranians fighting among themselves".

This would not be the first time Iran's regional rivals would seek instability in Iran or the dismemberment of the country. During the Iraq-Iran war, Saddam Hussein’s foreign minister Tariq Aziz famously lamented Iraq’s geopolitical dilemma being situated next to the much larger and more powerful Iran.

"[I]t is better to have five Irans, five small Irans rather than one big Iran," he told the Washington Post in 1981 as he spelled out Saddam’s goal of dismembering Iran, as recounted to David Ottaway.

This may not be where Trump aims to go. But unlike with North Korea, disregarding the pressures and designs of America's allies in the region will likely prove far more difficult on Iran.

- Trita Parsi is the author of Losing an Enemy - Obama, Iran and the Triumph of Diplomacy and is president of the National Iranian American Council.

Photo: An Iranian student holds up an anti-US banner (AFP)

Inside Iraq
Iraq's 'theft of the century': Plotters targeted Chinese and Russian oil companies
Israeli Elections
Ben Gvir, Smotrich and the end of the peace process
Inside Saudi Arabia
Saudi Arabia explores floating hotels as part of ‘commercialisation of space’ 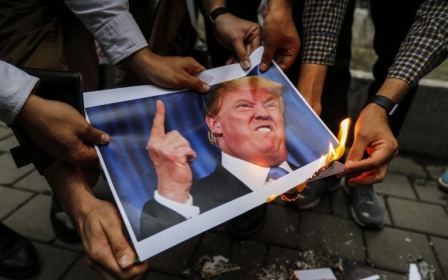