Meron Rapoport
Saudi Arabia apparently wants Israel to fight its war with Hezbollah. Some in Israel also think the time has come. But the risks still appear excessive 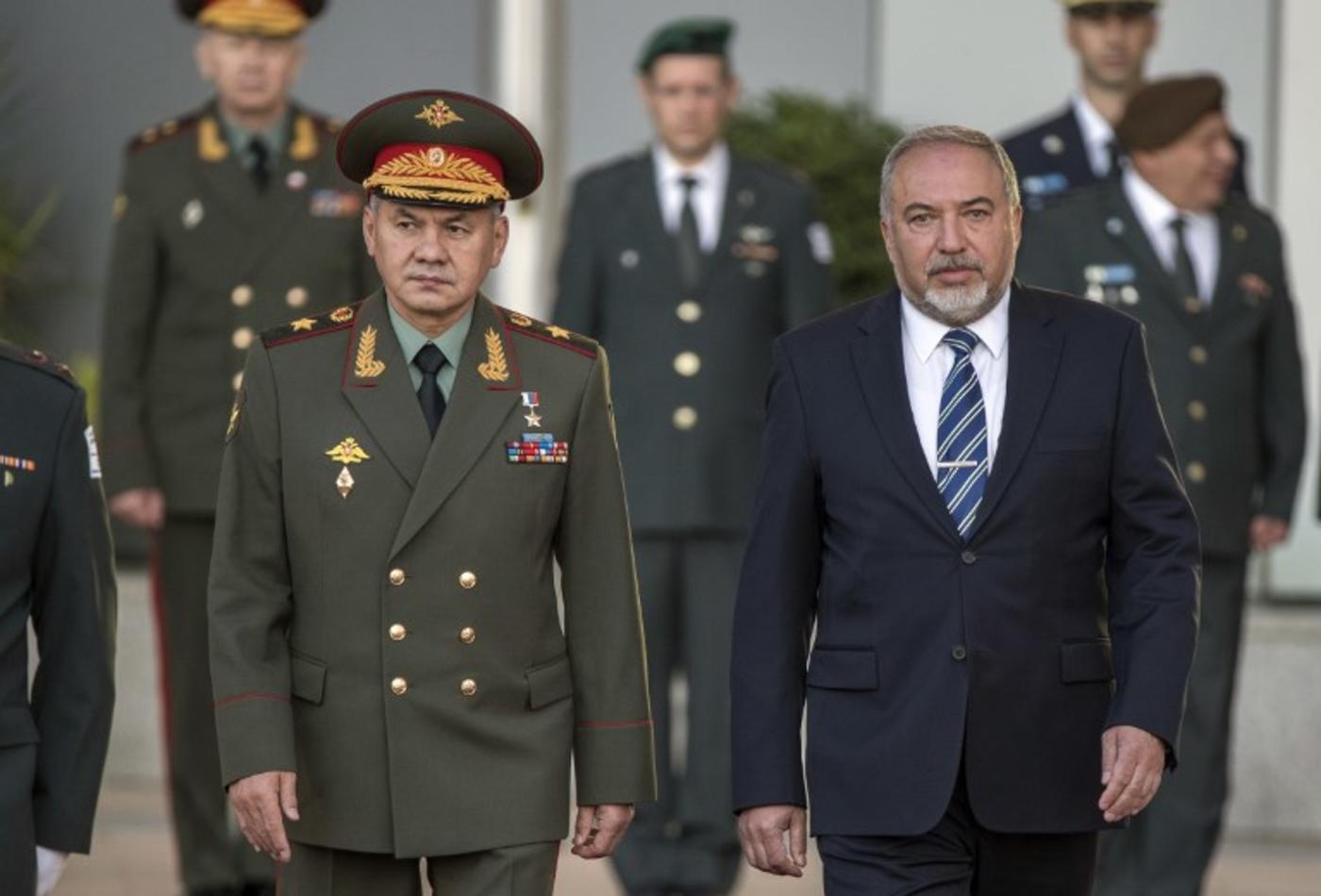 Sometimes a newscaster’s astonishment is simply unmistakable. There was such a moment two days ago, when the Israeli media first reported on Russian Foreign Minister Sergey Lavrov’s declaration that the Iranian presence in Syria is “legitimate” along with, naturally, Russia’s presence there - unlike the US-led coalition’s presence in Syria which, said Lavrov, is “not legitimate.”

Lavrov’s pronouncement lent a certain credibility to the notion that the threatening scenario warned against by Israeli commentators in recent years may now be unfolding before our very eyes.

An axis that begins in Iran and ends on the Mediterranean shore in Lebanon, one controlled by forces Israel always described as Satanic enemies bent on its destruction – Iran, Hebzollah, the Assad regime and others – is now given an official, public stamp of legitimacy from a power like Russia. It is hard to think of a worse scenario from Israel’s standpoint.

Simple logic says that it is worthwhile for Israel to act now, before the axis gets any stronger

The immediate threat is posed by Hezbollah. The memories of the Second Lebanon War in 2006 have not faded. Over more than a month, tens of thousands of Israeli soldiers were unable to overcome about a thousand Hezbollah fighters so as to prevent them from continuing to launch missiles at Israel and completely paralyzing its northern sector.

It is true that there are those in Israel today who try to sell that war as a success, since in the interim Hezbollah has not moved against Israel over the northern border, but whether the senior military echelons in Israel actually believe this to be true is uncertain.

Clearly, even if Israel’s anti-missile systems are able to stop some of them, in the event of a real war many of these missiles will hit critical targets in Israel. Hamas, with a much smaller supply of rockets of much lesser quality, was able to shut down Ben Gurion Airport for 48 hours during the last Gaza war in 2014. One need not be a pessimist to assume that, should real hostilities break out with Hezbollah now, the outcome could be much worse.

When Hezbollah’s leader Hassan Nasrallah got into the fighting in Syria to save the Assad regime, analysts in Israel were gratified. What they were saying then was: He’ll wear himself out, lose fighters and popularity, and cease being a threat to Israel.

Today the outcome appears to have been precisely the opposite. Hezbollah has lost about a thousand fighters and also some of the popular support it enjoyed throughout the Arab world when it was fighting Israel, but it is emerging from the civil war as a seasoned military force, capable of mounting a real war, not just guerrilla warfare.

Evidence that in Israel Hezbollah is being viewed as a “mini-army” surfaced two months ago. The Israeli army conducted manoeuvres it termed “the biggest in the last 20 years,” according to the Israeli media, with the participation of tens of thousands of soldiers, who enacted a situation in which Hezbollah stages an incursion into Israeli territory and tries to conquer Israeli towns.

A senior Israeli officer was quoted online by YNET as saying that Israel will never allow Hezbollah to take over territory within Israel, but the very fact that the Israeli military is discussing such a possibility proves how seriously they are taking the Hezbollah threat.

From Israel’s standpoint, however, the problem is that this is not only about Hezbollah. Israel for years has been arguing that Iran poses the greatest existential danger, not just to Israel but to world peace overall.

PM Benjamin Netanyahu has built his career on this argument, and has turned it into the cornerstone of Israel’s foreign and defence policy. Now, after a failed attempt to foil or undo the nuclear agreement with Iran, Netanyahu has Iranian forces sitting five kilometers from the Golan Heights border.

Granted, there is still no significant Iranian military presence in Syria. The Iranian Air Force has not built bases there. But a glance at the map, especially after Assad’s most recent victories in Eastern Syria and the downfall of IS in Mosul, shows a direct line running from Iran through Iraq to Syria and Lebanon.

Israeli television commentators miss no opportunity to display this threatening map as often as possible to viewers. Instead of being an abstract threat existing mainly in Netanyahu’s speeches at the UN, the Iranian threat is now real, and up close.

Netanyahu saw this trouble approaching and apparently believed that he would succeed in counterbalancing Iran’s increasing power via Russia. He has invested more in Russian President Vladimir Putin than in any other world leader, meeting with him no fewer than six times over the last two years.

Yet while the personal relationship between the two may be good, as Netanyahu proudly boasts at every opportunity, this has no real political significance. One can only guess what Netanyahu must have felt when he heard the Russian foreign minister talking about the “legitimacy” of the Iranian presence in Syria. Like when someone spits in your face, would probably describe it pretty well.

The upshot of all this is that the choice Israel now faces is not a simple one. The combination of Hezbollah and Iran is already perceived as a real danger. When the Assad regime stabilises, and all indications are that it will, the Syrian army will also become a factor in what is already a threatening equation. The Russian umbrella only enhances the power of this axis. US President Donald Trump may tweet incessantly about Iran on Twitter, but his threats have no impact in the real world.

Simple logic says that it is worthwhile for Israel to act now, before the axis gets any stronger. Israel has been dropping hints that this is precisely what it intends to do. That has been the intended message of the dozens of Israeli Air Force attacks on Syrian targets over the last two years.

The Saudi military, defeated in neighbouring Yemen, cannot really threaten Lebanon at a distance. But Israel can, for the Saudis

Defence Minister Avigdor Lieberman declared only on Thursday that Israel will not allow Iran to “dig in” in Syria, nor allow Syria to become a “forward position against Israel.” Lieberman gave no details on how Israel will prevent this process, but the threat of force is clear.

So is Israel en route to a war against Hezbollah or against the Iranian forces in Syria? Based on the daily news coverage on Israeli television, that’s what Saudi Arabia would like Israel to do; that’s how Israel commentators interpreted Saudi Arabia’s blatant threats against Hezbollah and Lebanon after the “resignation” of Saad Hariri as Lebanese prime minister. The Saudi military, defeated in neighbouring Yemen, cannot really threaten Lebanon at a distance. But Israel can, for the Saudis.

Ostensibly what we have here is a unique opportunity: an Israeli war against an Arab country with open support from Saudi Arabia, from the Gulf states and possibly from Egypt, too.

Such a situation occurs only rarely. In 1982, then prime minister Menachem Begin thought he had a free hand to operate against other Arab states, which was one of the reasons he permitted himself to go to war against the PLO in Lebanon. In the current situation, however, it seems uncertain whether Israel is about to seize the opportunity.

With all due respect to ties with Saudi Arabia, there’s no Israeli enthusiasm for shedding blood to advance the interests of Crown Prince Mohammad bin Salman. Netanyahu also understands that even if the Saudi government doesn’t really care about the Palestinians, public opinion in Saudi Arabia and the Arab world altogether will not allow the Saudis a closer alliance with Israel absent concessions of some kind, even symbolic ones, concerning the Palestinian question. In his current political situation at home, Netanyahu cannot pay that kind of price.

And from a political standpoint, there is something else, no less important. One of Netanyahu’s conspicuous achievements in terms of Israeli public opinion is the relatively quiet security situation obtaining in Israel over the last eight years, since he came to power the second time.

Apart from Operation Protective Edge in 2014, during the 11 years of his rule (including his first time around, from 1996 to 1999), Netanyahu has held back from large-scale military campaigns. His predecessor as prime minister, Ehud Olmert, carried out two major campaigns in two years, one in Lebanon in 2006 and the second in Gaza in 2008, which led to the deaths of more than 2,500 Lebanese, Palestinians and Israelis.

A military confrontation with Hezbollah, as noted, is liable to damage this record of Netanyahu’s – and not just because of the military power Hezbollah has developed or its supply of tens of thousands of missiles.

Rather because the appraisal in Israel is that if Hezbollah is attacked in Lebanon, the response will come not only from Lebanon but also from Syria, where Hezbollah has a significant presence. This is why Israel no longer speaks of a “Lebanese front” but rather a “northern front,” i.e., Lebanon and Syria.

To reiterate, the dilemma is not a simple one. Despite all the difficulties and dangers, Israel currently enjoys a clear military advantage over Hezbollah. So long as the Syrian army under Assad is barely there, and Iran has not yet stabilised its base in Syria, over the next two or three years the situation might well change to Israel’s detriment. Thus there is logic in acting in the near term.

Another factor is the distinct possibility of elections during the first half of 2018 due to the criminal investigations against Netanyahu, which could push him to risk a military confrontation, counting on the idea that the public will unite behind his government during a war. Still, if one had to guess, what appears likely is that Israel will choose to wait. Wagering on a war right now could prove too expensive.

Photo: Israeli Defence Minister Avigdor Lieberman (R) and his Russian counterpart Sergei Shoigu (L) review the honour guard during a welcome ceremony at the defence ministry in Tel Aviv, on October 16, 2017. Shoigu and Lieberman were expected to discuss Syria and Iran's presence there. (AFP)

This article is available in French on Middle East Eye French edition.http://www.middleeasteye.net/fr/opinions/l-iran-en-syrie-le-dilemme-d-isra-l-au-nord-454724309