From Iraq to Kunduz, US civilian killings are no accident - they're policy 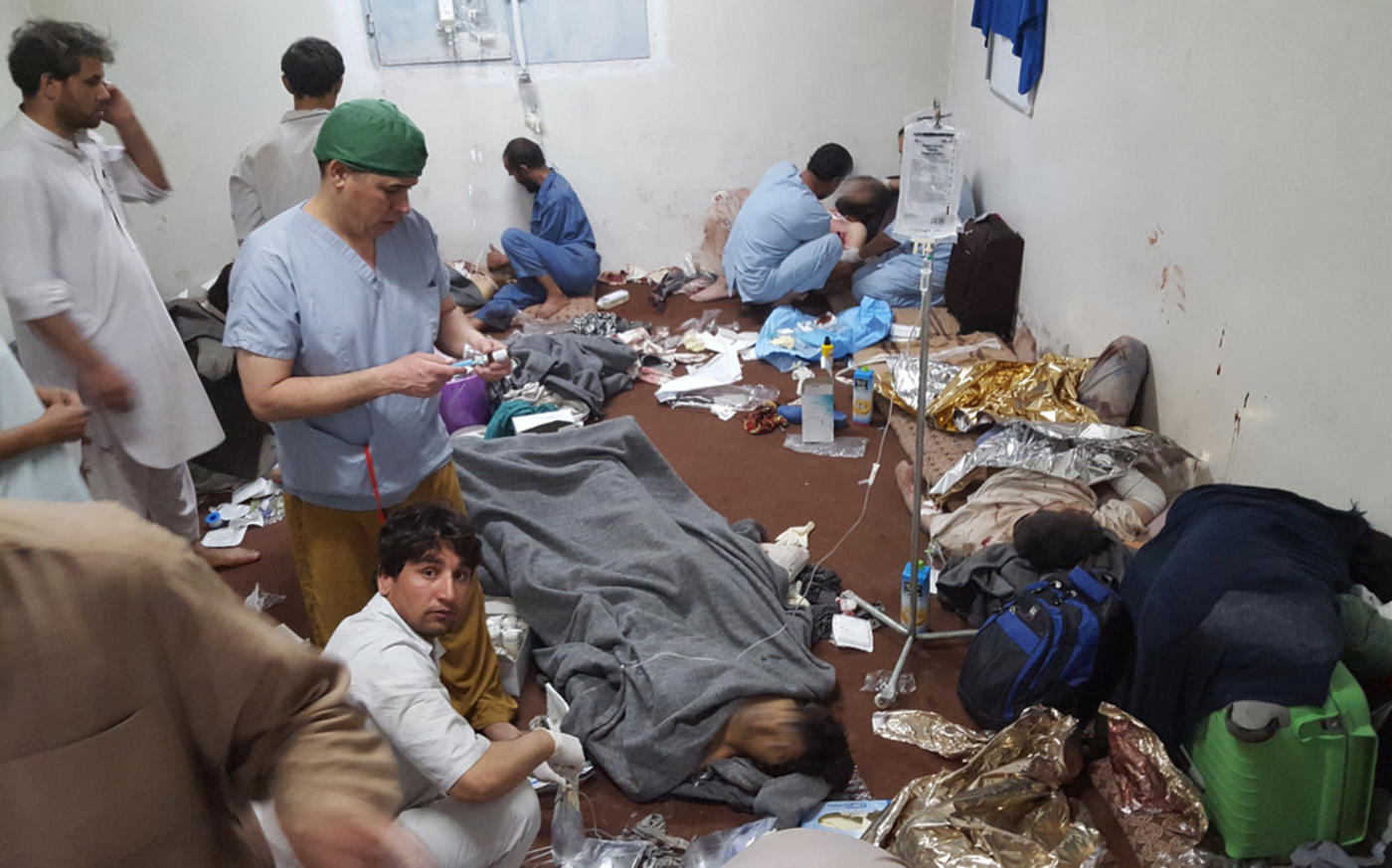 America and its allies make modern war in a way that assures "mistakes" destroy hospitals, and civilian lives are taken by drones and bombs. These horrors are all too often strategic decisions, or the result of the profligate use of needlessly destructive weapons. They are typically far from accidents. The attack on a Doctors without Borders (MSF) hospital in Kunduz, Afghanistan, is only the latest. It is important as a clear example of a sordid policy.

The series of cascading explanations the United States offered for striking Kunduz hospital ignore the larger story of how such "accidents" really happen.

An American AC-130, a flying gunship, conducted the strike. A retired Air Force Special Operations officer explained to me the AC-130 is considered a "first hit" weapon; its ordnance hits where it is designated to hit on the first try. The targeted hospital was marked by a US Special Forces operator on the ground alongside the Afghans. The AC-130 fired on the hospital for over one hour, in 15-minute paced barrages, even as Doctors Without Borders representatives frantically sought to contact American officials.

The US should have known the target was a hospital. The Afghans had controlled Kunduz alongside their American allies for some time. It was a mature battlefield, with landmarks such as the hospital well-known on the ground. It is a large, distinctive building as seen from the air; take a look.

In addition, NGOs employ organisations like the International NGO Safety and Security Association (INSSA) specifically to coordinate with armed forces, to include providing precise GPS coordinates to avoid "accidental" targeting. Doctors Without Borders also directly provides combatants their locations; in Kunduz, as recently as 29 September.

The latter details are especially important in evaluating strikes against hospitals and other civilian targets. Unlike in WWII when planes flew over cities hoping to hit a target only as precisely defined as "Tokyo," modern ordnance is delivered using laser designation, satellite coordination and GPS systems.

America blew up exactly what it aimed at in Kunduz.

Kunduz was not the first protected facility America attacked.

In 2001 the United States bombed the Red Cross in Kabul, twice. The US also bombed other targets in Iraq; a maternity facility in Baghdad, a hospital in Rutbah, stormed another in Nasiriya, and shelled the Al Yarmuk Hospital in Iraq in 2003. A hospital in Belgrade, former Yugoslavia, was bombed in the 1990s. In Hanoi, the United States struck the Bach Mai hospital – twice - during the infamous 1972 "Christmas Bombing".

America bombed the Al Jazeera broadcast facilities in Baghdad and Kabul and also destroyed the Chinese Embassy in Belgrade in 1999. Civilian infrastructure, such as water and sewer plants, were targeted in Iraq in 1991 and again in 2003.

There are always investigations following such incidents, though in the history of modern American warfare none have ever deemed such devastation as intentional. Yet hospitals do make attractive targets. Destroying them results in fighters dying of their wounds, and increases the burden on healthy soldiers, pulling them from the battlefield to care for their own wounded. In military terms that is known as a "soft kill".

Accidents emerge in war, but so do patterns.

Civilian deaths and the drone war

The killing of civilians as a result of American war is not limited to attacks on hospitals. The global drone war continues to take innocent lives, in what has come to be known without shame as collateral damage.

There is a commonality to the growing death toll: the inevitable civilian deaths are caused by the profligate use of horrifically destructive indiscriminate weapons.

Civilian casualties overall in America's 2003-2011 Iraq war were anywhere from 140,000 dead to upwards of 500,000, with many killed by artillery, aerial bombs and depleted uranium munitions, indiscriminate weapons unique to American forces.

In Yemen, in just one specific example, American drone strikes aimed at 17 named men actually killed 273 people, at least seven of them children, including the American citizen son of al-Qaeda propagandist Anwar al-Awlaki.

For its drone strikes, the US uses Hellfire missiles, armed with warheads originally designed to burn through tank armour. Aiming them at a person inevitably will kill those nearby; the US claimed al-Awlaki's son was killed inside a car, seated next to the actual target. Such deaths are closely tied to America's policy of "signature drone strikes," where a missile is aimed at a "profile:" a suspect cell phone, a car matching some description, or a suspicious gathering.

Saudi Arabia in Yemeni cities, and Israel in urban Gaza, employ cluster munitions. Such munitions are known as "area denial weapons," causing indiscriminate destruction over swathes of territory. Documented munitions used inside Yemen include American-made CBU-52 cluster bombs, each loaded with 220 "anti-material" bomblets. Imagine the use of such weapons in central London, or on a Manhattan street.

Though not confined to cluster munitions alone, the deployment of these US-made weapons by the Saudis in Yemen has only added to the carnage. Almost 4,000 people have been killed, with 19,000 injured.

In Gaza in 2009, the Israelis used cluster munitions, white phosphorus - a flesh burning agent also used by the US in Iraq - as well as standard artillery, all against dense urban areas. The UN estimates over 1,400 civilians, of whom 495 were children, were killed in the attacks. The Israelis also destroyed a hospital in Gaza, attacked two others, and shelled UN-run schools in 2014.

Policy? The US, Israel and Saudi Arabia are among the countries that refuse to sign the Convention on Cluster Munitions banning such weapons.

The cost of modern war

Accountability remains in the hands of those with the weapons. America and Israel conduct self-investigations, and stymie independent ones, to clear their military of blame - the Saudis do not even bother. At the UN, the United States blocks action critical of Israel. In Yemen, the US claims it cannot control how the Saudis choose to employ American weapons, and has stated the Saudi actions only "border on" violations of international law; Amnesty International labels them war crimes. NATO and the EU are deathly silent on the substantive issues, even in places where their own forces are on the ground.

Modern war as conducted by the United States and its allies in the Middle East has as a known outcome massive civilian casualties. The sites precisely targeted can be civilian, in violation of all known standards of international law. With indiscriminate weapons, the collateral kills are foreseeable - and thus preventable - consequences. To label the destruction of one hospital in isolation a war crime is to think too small. The civilian deaths are policy.

Kunduz was no accident. It was simply another example.

- Peter Van Buren is a retired 24-year veteran of the US Department of State, including service in Iraq. He is the author of We Meant Well: How I Helped Lose the Battle for the Hearts and Minds of the Iraqi People. His latest book is Ghosts of Tom Joad: A Story of the 99 Percent. He lives and writes from New York City.

Photo: Handout photograph released by Doctors Without Borders on 7 October, 2015, shows medical personnel as they treat wounded colleagues and patients in a hospital in Kunduz on October 3, 2015, in the aftermath of an airstrike on the hospital by US forces in Afghanistan (AFP)