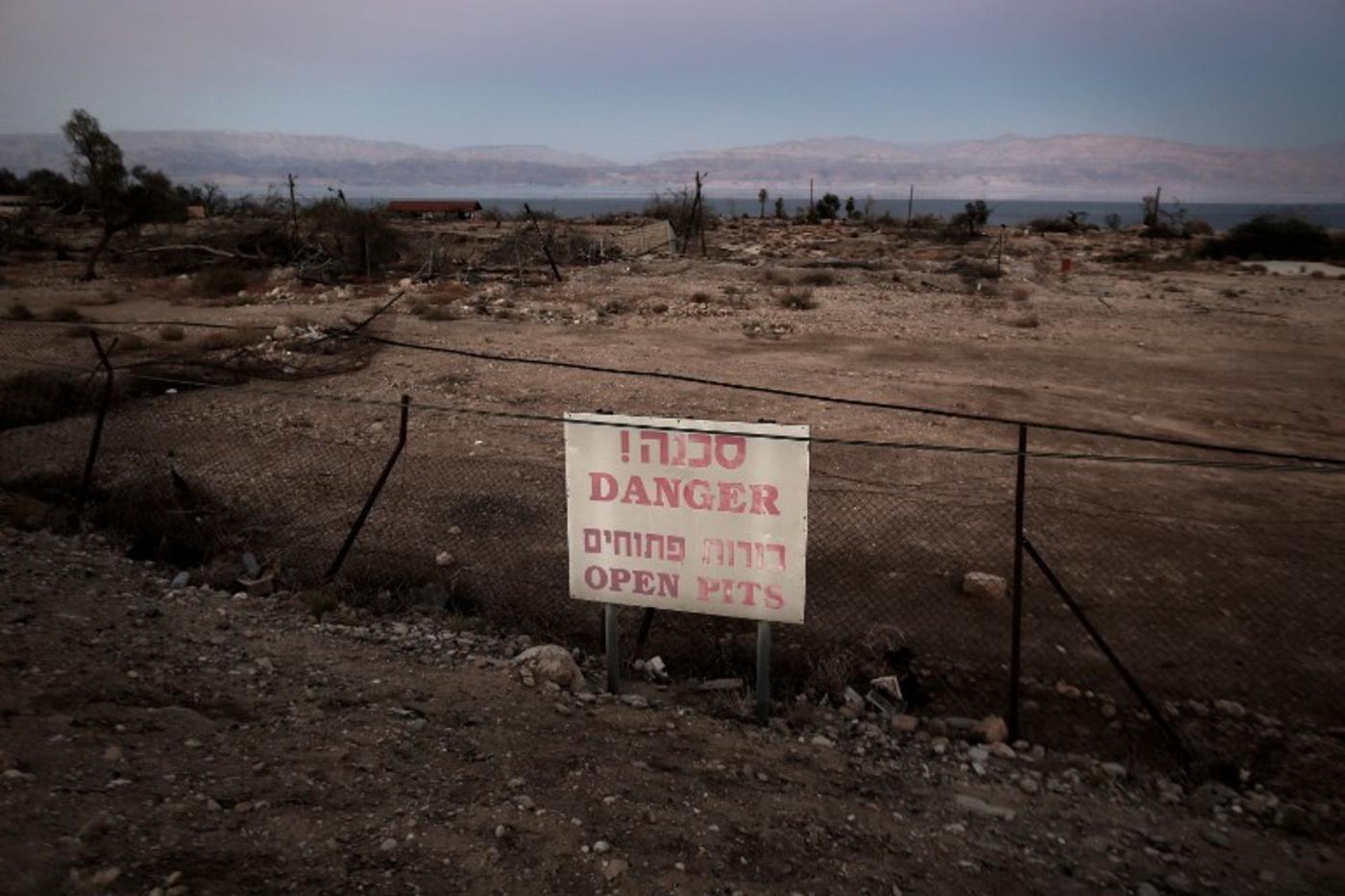 Scientific American recently ran a feature on Israel’s desalination industry, hailing it as a miraculous feat of ingenuity of a small nation in the midst of burning, backward nations.

To quote the article’s romanticised language, the author refers to Israel as “a galvanised civilisation that created water from nothingness” where just a few miles away, alluding to Syria and Iraq specifically, but also Arab nations in general, “water disappeared and civilisations crumbled”.

It is surprising to see such blatant promotion of Israeli exceptionalism and the mendacious resurrection of “making the desert bloom” mythology on the pages of Scientific American. It is important to inject facts, history and reality into this water fairytale.

The author brazenly claims 900 years of Palestinian history is Israeli. In fact, Israel is a 68-year-old country established by European Jewish immigrants who conquered Palestine, expelled most of the indigenous population and laid claim to all their land, farms, homes, businesses, libraries and resources.

Beyond that gratuitous appropriation of Palestinian history, the article provides no historic context to climate, rainfall and natural water resources, giving the impression of a naturally inhospitable arid land.

In fact, throughout history, northern Palestine boasted a Mediterranean climate, having hot and dry summers with abundant rainfall in winter. And in fact, Ramallah’s rainfall exceeds that of London, as does Jerusalem’s rainfall.

The southern half of Palestine becomes desert around the Beersheba district, where the Naqab Desert expands to the tip of Palestine. When Israel was established, Palestinians were already sustainably cultivating 30 percent of their country. Excluding Beersheba district, that figure rises to an average of 43 percent, reaching as high as 71 percent in Gaza.

Water management in service of colonialism

Israel’s water regime functions synergistically within a larger context of Jewish exclusivity and Palestinian negation. To separate the two in discussion is disingenuous, since much of the current water crisis is directly and indirectly attributable to Zionism’s reversal of that sustainable organisation of the land’s native society and agriculture.

In its first year of establishment, Israel’s diversion of water from rivers and tributaries began in earnest, forcing nature into unnatural changes in fulfilment of an ideology that conflicted with the local terrain.

Ignoring the ecological incompatibility of planting alien, water-intensive crops to feed European palates and irrigating the desert by siphoning water from neighbours, local inhabitants and local biodiversity, the over-pumping and diversion of water to serve Zionist settlements with unsustainable European standards set the stage for a multitude of environmental disasters across all of Palestine.

For example, although Israel propagated a perception of ingenious Jewish agricultural practices (through PR narratives of Jewish exceptionalism like that employed in the Scientific American article), Israel’s foreign agriculture was actually destructive to Palestine’s ecological balance. With 80 percent of available water going to agriculture, which contributed less than 3 percent of Israel’s economy, Israel continued to sap water resources to further the Zionist colonial scheme, an ecological contradiction to the local environment.

Depriving Palestinians of their own water

Simultaneous to colonisation was the negation and exclusion of the native Palestinian society. Along with wholesale theft of Palestinian wealth and assets, Israel commenced with the destruction of Palestinian life, central to which was Palestinian agriculture, which depended on non-irrigation crops like olive trees.

Further to this end, Israel’s total control over all of Palestine’s water has allowed them to keep Palestinians thirsty and on their knees. The inequitable and racist distribution of water has been extensively documented in scathing reports by local and international organisations.

The article states that Israel supplies Palestinians with water, ignoring the crucial fact that this water belongs to Palestinians in the first place. Fresh water is pumped from a mountain aquifer under Palestinian villages and territory to supply Israeli settlements. A small fraction of this water is then sold back to Palestinians, typically at much higher prices than that for Jewish colonies in the same area.

While Jewish settlers consume over five times more water, enjoying verdant lawns and private swimming pools, Palestinian access to water is variable, at times discontinuous for weeks or months, or denied completely. It is not uncommon for whole villages to go without drinking water, to say nothing of what this means for Palestinian agriculture.

A look at surface water management provides further example of Israel’s destruction of Palestine’s hydraulic potential. Al Auja River, which Israel renamed as the Yarkon, was a vigorous coastal river with an abundance of fish and fauna species, some of which exist nowhere else.

Originating in the Palestinian village of Ras al-Ayn, it was described in a travel guide from 1891 as “a roaring river that zig zags until falling into the sea…its power turns mills and small fish can be caught in it”. In a mere decade of Israeli management of Palestine’s water, this life-giving river was reduced to a trickle of sewage, its water siphoned and replaced with a toxic sludge of industrial and domestic pollutants that, in 1997, ate through the lungs and vital organs of athletes competing at the Maccabiah Games who fell into the river when a bridge collapsed.

One of Israel’s first water projects when it conquered access to the Jordan, was to begin diversion of water away from their neighbours, spurring Syria and Jordan to follow suit to preserve their own share of regional water. Decades later, water levels are so low that the Jordan River can no longer replenish the Dead Sea. The declining water levels, coupled with Israel’s "evaporation ponds" to extract minerals and other industrial activities have created an environmental disaster never before seen in Palestine.

In the 1950s, Israel drained Palestine’s Huleh wetlands, a biodiversity treasure of the Near East, to establish Jewish settlements. Hundreds of such colonial projects have greatly denigrated the rich biological and geographical diversity that thrived in this terrain where three continents meet.

So, ignoring Zionism’s history of degrading Palestine’s environment and Israel’s pivotal role in the genesis of the current water crisis, the Scientific American article sets the stage to explain the miracle of this low-cost, unobtrusive, seemingly limitless supply of fresh water. Frankly, this narrative belongs with other myths like “a land without a people for a people without a land” and Santa Claus, his reindeer and toy factory at the North Pole.

While desalination does indeed offer promise and many advantages, it is far from miraculous nor is it even an exception in the Middle East, as water-challenged Gulf nations in the region have employed desalination techniques for some time.

This narrative belongs with other myths like 'a land without a people for a people without a land' and Santa Claus, his reindeer and toy factory at the North Pole.

From experience here and elsewhere, we know that there are grave environmental costs and serious health hazards to desalination, including the byproducts of pollution and greenhouse gases. It is not clear whether the touted $0.58 per cubic meter of water cost includes the cost of pollution or the cost of large swathes of valuable costal land that must be used for the desalination infrastructure. Nor was there any mention of the known and predictable devastation to local marine life from physical and chemical alterations of the environment inherent to desalination processes.

In the past two decades, Israeli environmentalists have worked to awaken their society to the magnitude of their destruction of the local natural world, and their efforts, as well as legislation and regulations, have started to mitigate some of the deleterious effects of Israeli conquest, settlement and forceful alterations of the ecology and geography.

It is not an easy recovery, however, as founding Israeli policies, borne from white settler colonial imagination, have nearly obliterated the sustainable organisation of Palestine’s indigenous civilisation and native ecology.

It is irresponsible and disingenuous to continue promulgating the romanticised myth that exceptionalises Israel as uniquely brilliant, chosen to lead and inspire. The true genius is the audacious spin that masks Israel’s economic, environmental and social failures, and the society’s unspeakable destruction of native life, both human and non-human.

Scientific American would do better to give us hard-hitting inquiries and honest reporting on the multitude of environmental challenges facing humanity, especially in the Middle East, during a time of unprecedented population size and pollution, unfathomable wars and dwindling resources, rather than promoting a settler-colonial state’s self-aggrandising fairy tales.

- Susan Abulhawa is a Palestinian-American writer and bestselling author. The Blue Between Sky and Water (Bloomsbury, 2015) is her most recent novel.

Image: A poster warning visitors of sinkholes in Israel's abandoned tourist resort of Ein Gedi on the shore of the Dead Sea in July 2016 (AFP)