It is not Islam that is in crisis. It is Macron and his government

Malia Bouattia
In a desperate bid for votes, the French president is turning to the oldest trick in the right-wing book: Islamophobia 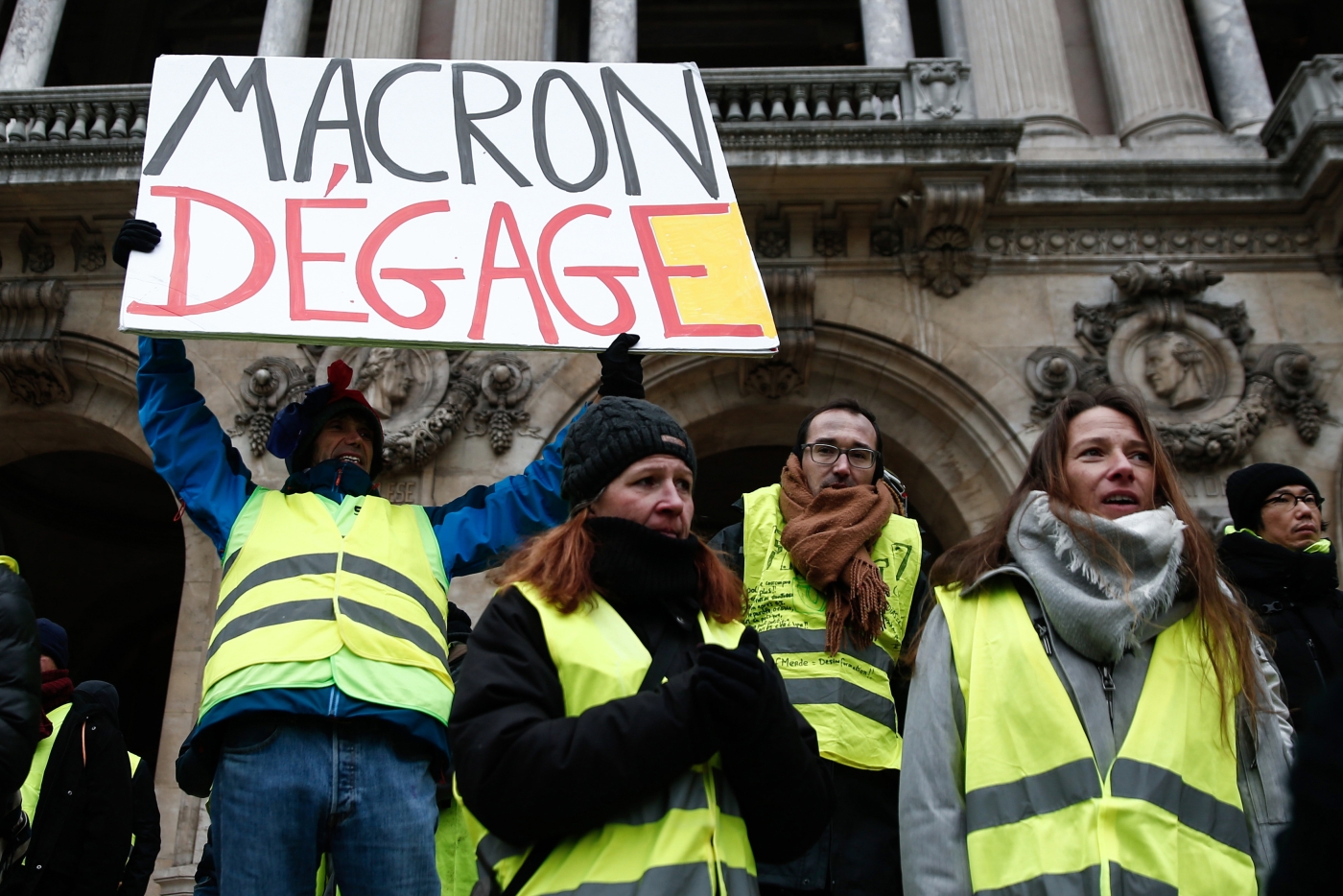 French activist Jean-Baptiste Redde holds a cardboard reading "Macron go away" during a demonstration in front of the Opera House in Paris against rising costs of living blamed on high taxes on 15 December, 2018 (AFP)

French President Emmanuel Macron, following a disastrous first three years in office, is preparing for re-election by mobilising the oldest trick in the right-wing book: going after Muslims.

Macron spent much of his hour-long speech on Friday addressing the measures that will be introduced to protect France from so-called separatism, painting a vivid picture of the Muslim threat and how he will take control of Islam in his country - a religion he says “is in crisis all over the world today”.

Even if we were to entertain this utterly baseless statement, Macron’s confidence in being able to "solve" the issues that plague a religion shared by more than 1.5 billion people worldwide is, in itself, quite breathtaking.

Perhaps he’s tapping into the persona he presented during his first presidential election campaign in 2017, the Macron who oozed confidence and showed the people that he had things firmly under control.

The issue is, he didn’t actually have things under control. The public sector strikes in the spring of 2018 were followed by the gilets jaunes movement that erupted in November of that year, which was in turn followed by a mass railway strike the next year. This vividly demonstrated that speeches in slick suits were not enough to appease people suffering from a long-term social crisis, repeatedly made worse by Macron’s government and its assaults on working people.

Since early into his term, the president has faced popular fury in the streets and workplaces against labour reforms, rising fuel prices, and issues such as unemployment

Since early into his term, the president has faced popular fury in the streets and workplaces against labour reforms, rising fuel prices, and wider issues such as unemployment, lack of affordable housing, police violence and more.

The coronavirus pandemic was seen as a partial relief for Macron. It meant introducing exceptional laws, repression and a total lockdown in the streets, allowing him to project a sense of “control” as people feared for their lives and those of others. But this period also reinforced the many failures of Macron’s government. From divestment of state funds from welfare and social services, to a crisis of unemployment and poverty, the problems didn’t end under the lockdown; rather, they intensified, as did the anger.

The French state was also under the microscope as Black Lives Matter demonstrations swept across the western world. France was being held accountable on the world stage over the deaths of numerous Black and Arab youth at the hands of police, chief among them Adama Traore, a young Black man from the poor Parisian suburbs who was killed in police custody. His case highlighted, once more, the systemic racism so notorious within the French state, and so deeply rooted in its colonial past.

Thousands of people took to the streets of the capital and other major cities, demanding an end to the violence and accountability for the officers involved in these murders. The mobilisations delivered another blow to Macron’s carefully cultivated image of change. Every statement he made about recognising the negative colonial history of France sounded hollow as the grandchildren of the colonised fought back against racism and state violence.

With such a period of social upheaval, dissatisfaction and distrust towards the state, it beggars belief that the response by Macron has been to double down on more of the same, attacking some of the poorest and most oppressed in the country. This wastes state resources while failing to address a growing economic and social crisis, increasing rates of Covid-19 infections, and overstretched public health services.

Instead, Macron has effectively declared that the curtailing of civil liberties will be the priority of the Elysee. His plans sound more and more like the UK’s approach to so-called counter-extremism. Stricter monitoring of mosques, ending the import of imams from abroad and scrutinising their financing, Macron is replicating what has become the new normal in all nations that have signed up to the “war on terror”.

Even sports organisations and other associations are expected to be under surveillance for their role in being a front for Islamism. Sound familiar? First they came for the Muslims.

The strategy of “training and promoting in France a generation of imams and intellectuals who defend an Islam fully compatible with the values of the republic” is not a new one.

France adopted these methods during its colonisation of Algeria, not just within the sphere of religion, but also among communities where it would select and “educate” a small minority of Algerians who would be known as les evolues (the evolved ones). They were expected to adopt and love the values of the French republic, then go out to convince the rest of the Algerian people against seeking liberation.

The racism of the republic still runs deep, despite Macron’s past attempts to engage in discussions on the horrors of French colonialism. The civilising mission continues. Muslims must be educated, even on how to practice their own religion. Otherwise, they revert to old, barbaric tendencies, and worse, rebel against the French state.

Even Macron’s use of “Islam” in reference to the so-called crisis, as opposed to Muslims, is a way of portraying the problem as ideological, fundamental and connected to the religion as a whole.

It also serves to distance himself from the 5.7 million French Muslims who will be impacted by his policies. He has no interest in addressing their struggles, their disproportionate presence in socioeconomically marginalised neighbourhoods, their discrimination within education or employment, or their brutalisation at the hands of the state. His political agenda has amplified all of these issues; it is in his interests and those of his political base to continue this.

When the French president declares that he will “defend the republic and its values and ensure it respects its promises of equality and emancipation”, it is of course a dog whistle to the far-right, but also a way to reassure the elite around him whose interests he serves.

A question of civil liberties

The question, as we know only too well in the UK, isn’t limited to Muslims. Once a population accepts that the civil liberties of one racialised group can be taken away, it undermines its ability to defend everyone’s. Once Muslim teachers, organisations, representatives and clubs can be policed and spied on, it does not take long for others to follow.

The French people have demanded better from their government, applied pressure by striking and mobilising in the streets, and demonstrated exactly how they feel about its policies. Now, their government has clearly decided that this must stop, and it is looking to its neighbours across the Channel for a solution.

His hope is that he will galvanise the French right to vote for him and split a notoriously Islamophobic left, just in time for the election

Maybe Macron is yet again blinded by his hubris and taken in by his own image-building efforts. He forgets that there were many evolues who betrayed the colony, and instead joined the Algerian struggle for decolonisation. His hope is that he will galvanise the French right to vote for him and split a notoriously Islamophobic left, just in time for the election.

Our hope is that in response to a presidential term that has been paved with dissent against the state and its institutions, the masses in France will rise up once again and reject this attempt to stifle political freedom under the guise of combating extremism.

It is not Islam that is in crisis. It is Macron, his government, and the system they are trying to defend. The 2022 election presents a real opportunity to consign them to the dustbin of history. 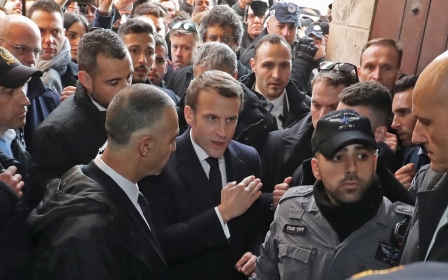