Mohammad Ayesh
Not only would the move breach Jordan's 1994 peace agreement with Israel, but it would likely set off uprisings that directly impact the kingdom's security 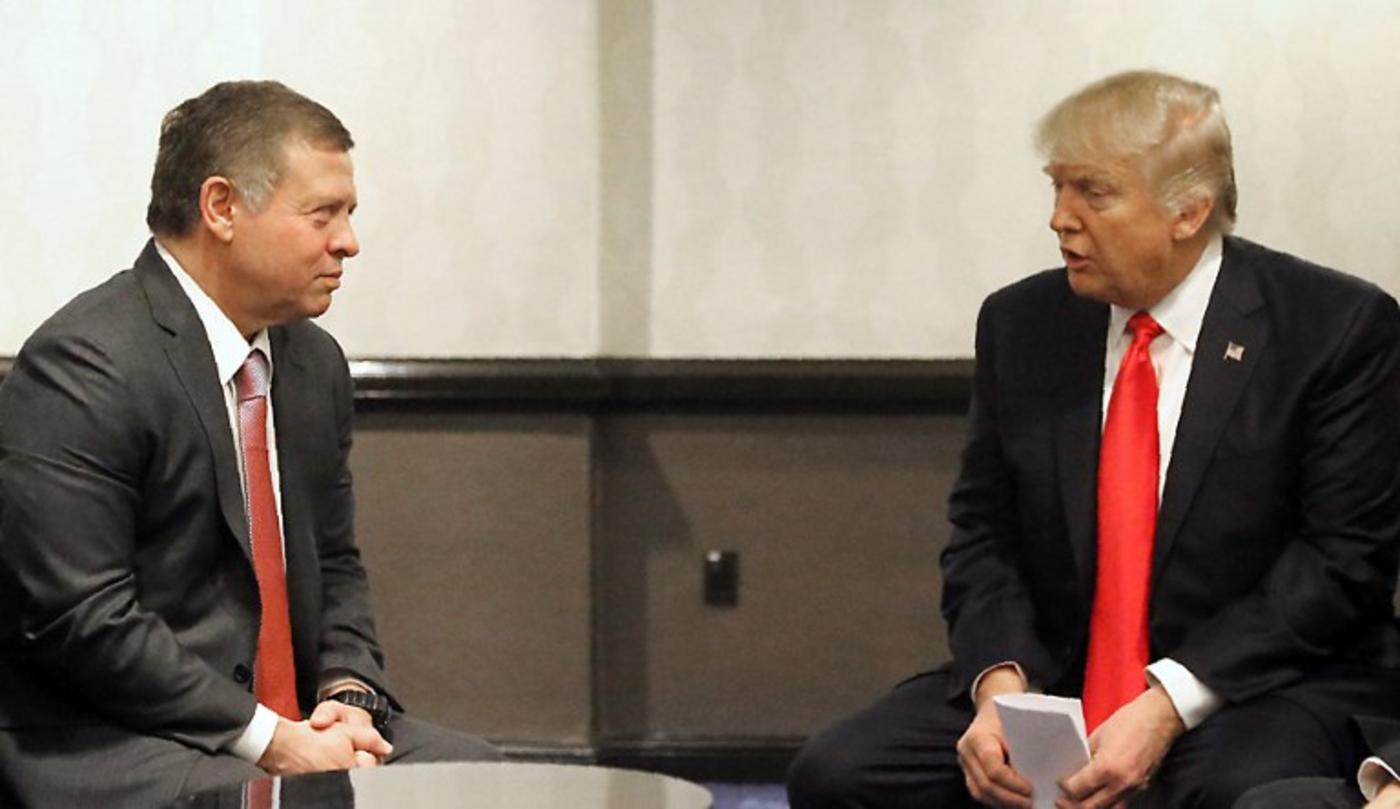 For decades, the Jordanian role in the occupied city of Jerusalem has been exceptional and rather sensitive case.

For this reason, Trump’s repeated vows to move the US embassy from Tel Aviv to Jerusalem has disproportionately upset the Jordanian government which, at the moment, has no shortage of crises.

It’s this nervousness that explains King Abdullah II’s rushed visit to Washington only a few days after Trump’s arrival at the White House, the first Arab leader to meet the new president reportedly coming without invitation or prior arrangement.

Key to understanding Jordan’s anxiety is the Jordanian-Israeli peace treaty - sometimes called the Wadi Araba Treaty because of where it was signed – signed in October 1994 which stated that Israel would respect the special role that Jordan had historically played in Jerusalem’s holy places and, further, would give priority to the kingdom’s role during final status negotiations.

In other words, with the treaty, Israel formally recognised Jordan’s role, something it hadn’t been able to deny or ignore for decades. Israel also agreed at the time to refrain from changing – either geographically or demographically - the status of the holy city before reaching at a final agreement to which Jordan was a party.

But even before Wadi Araba, Jerusalem had been under Jordanian administration and part of the Hashemite Kingdom for many decades. When Jordan annexed the West Bank in April 1950, Jerusalem became an integral part of the country whose constitution prohibits relinquishing or ceding any part of its territories.

And even after Israel’s occupation of Jerusalem in 1967, Jordan maintained the right to oversee the city’s holy Islamic and Christian places. To this very day, the Jordanian Ministry of Awqaf (Endowments) continues to provide custodianship and services at Al-Aqsa Mosque and other religious places in Jerusalem.

In view of these facts, Jerusalem’s legal and political status constitutes an important strategic file as far as the Jordanian regime is concerned. If the US changes the city’s status, from a Jordanian perspective, that would mean that the very mediator and guarantor of the Wadi Araba agreement is taking unilateral measures to change the status of a disputed territory over which negotiations have not yet been finalised.

The rush to DC

In light of this history, Jordan is the most anxious party in the region as a result of Trump’s pledges with regard to move the US embassy, a measure which would imply US acknowledgment that Jerusalem is the capital of Israel.

The king’s rushed visit to Washington DC notably came without consultation or reference to major Arab bodies like the Arab League or the Arab group at the United Nations, underlining the incapacity of a united Arab front to stand up to Trump. That incapacity was clear in the aftermath of Trump’s executive order to ban citizens of six Arab states from the US.

Importantly, the unplanned visit also makes it clear that Jordan takes the US promises seriously and believes that America will actually move the embassy to Jerusalem, a step that would constitute the biggest transformation in the American stance in years – and one with major ramifications.

First, recognition like this of Jerusalem as the Israel capital would breach the 1994 peace agreement, destroy all peace efforts and fatally end the final status negotiations in which the city is one of the most prominent and most crucial issues.

Ultimately, it would leave Jordan with one of two choices, each more bitter than the other: either enter into a two-headed crisis with Washington and Tel Aviv at the same time or silently lose its role in Jerusalem.

Clearly, some of the anxiety stems from decision-making circles in Jordan that believe an embassy move would lead to a security collapse inside the Palestinian territories.

After all, the Al-Aqsa intifada in 2000 erupted and raged on for several years because of the holy city. The uprising saw the collapse of the Oslo agreement with the termination of the geographical designation of the West Bank territories into A, B and C as well as the unilateral decision to withdraw Israeli troops from the Gaza Strip without negotiations.

The extreme tension and rage within the Palestinian territories right now suggests that such a move could indeed lead to the eruption yet another intifada, one which could lead to a major strategic change in the Palestinian-Israeli conflict, including the total collapse of the Palestinian Authority with all the repercussions that might entail.

Naturally, Jordan is keen to avoid more chaos in the region, but especially because a large proportion of Jordanian citizens have Palestinian roots and are linked, through family and tribal ties, to Palestinians living in the West Bank.

A new Palestinian uprising – especially one which causes the PA’s collapse - would have a direct impact on Jordan’s security and it is this security collapse that is driving the kingdom, more than any other party, to anxiety. If the PA falls apart, it would become rather difficult, going forward, to find anyone willing to negotiate in the name of the Palestinian people.

Above all, moving the embassy would breach the Jordanian-Israeli agreement that was signed thanks to US mediation and sponsorship. It would render final status negotiations into absurdity because the most important issue – Jerusalem - would have been settled as a fait accompli by the Israelis and the Americans.

Mohammad Ayesh is an Arab journalist currently based in London.The views expressed in this article belong to the author and do not necessarily reflect the editorial policy of Middle East Eye.