Is Khaled Ali Egypt's left-wing saviour - or is he being played?

Rania al-Malky
Participating in this election in any way, shape or form is not a display of political proactivity in a democratic process - it's a betrayal of the fundamental spirit of the January uprising When human rights lawyer and ex-presidential candidate Khaled Ali became the first to announce on 6 November his bid for Egypt's presidential elections, planned for around April 2018, it was hard to get excited about the prospect for change traditionally associated with such a contest.

Ali is one of a few candidates who have - so far- announced their intention to join the presidential race. On Wednesday, Ahmed Shafiq, former air force pilot and the last prime minister under Mubarak, who lost in a closely contested race against Mohammed Morsi in the 2012 elections, announced his bid from self-imposed exile in the United Arab Emirates.

How do you guarantee electoral transparency if you are dealing with an incumbent who controls all state institutions?

In a strange twist, Shafiq also claimed in a video posted on several media outlets including Al Jazeera that the UAE, where he had sought refuge for the past five years to avoid facing corruption probes in Egypt, had blocked him from leaving the country to prevent him from running against the Egyptian President Abdel Fattah el-Sisi.

Meanwhile, Sisi has yet to announce whether he will run again although he has reaffirmed his support for a two-term limit for the office of the president.

A third contestant is former army officer Ahmed Qunsuh, who declared his intention to run for the presidency in a video that circulated on social media platforms on Wednesday.

The plot that has been unfolding in Egypt since the 2013 military coup has thrown the country into the darkest corner of an absurdist rabbit hole "where nothing is what is and everything is what it isn't," as Lewis Carroll famously put it.

Nothing crystalises this absurd realm more than talk of a presidential election. And nothing is more frustrating than watching icons of Egypts 2011 uprising, and sincere participants in the country's only truly democratic 2012 presidential race, actively contributing to this charade.

It took Egyptians 60 years to get rid of a military dictatorship disguised as a civilian, democratic system of governance and less than two years of chaos, bloodshed and propaganda on a massive scale to throw the country back into the darkest pit of repression Egypt has ever witnessed in its modern history.

This apathy partly has to do with Ali's particularly absurd situation.

Ali contends that the case is politically motivated and that videos submitted to the prosecution as evidence against him were doctored. The prosecution claim that the videos show he made an obscene hand gesture following a State Council ruling on a case that would annul a maritime demarcation deal giving Saudi Arabia Egypt's two Red Sea Islands of Tiran and Sanafir.

Losing the appeal could potentially bar Ali from running for public office as some legal interpretations consider public indecency convictions to be crimes of "immorality" and would hence strip the perpetrators of their civil and political right to run, or even vote in national elections.

The absurdity of the entire situation is colossal on so many levels. Sisi's rule has murdered hundreds of people in public, jailed tens of thousands without due process and muzzled the media in an unprecedented crackdown, but is now attempting to silence one of its critics by accusing him of being "rude". Seriously?

All that aside, a closer look at the conditions under which Ali announced his presidential bid adds yet another dimension to the tragi-comedy. Just hours before the event, which was tellingly hosted by the opposition party Al-Dostour because no other venue in the entire capital would dare host it out of fear of reprisal from security forces, the police raided a printing house Ali had commissioned to prepare materials for distribution.

At the press conference, which was conspicuously unattended by all but one local satellite television channel, Ali promised to coordinate with "all political actors" to "save Egypt from an unfortunate, dark fate."

We have all heard this before. Egypt's opposition have a gift for agreeing to disagree.

This was put to the test during the most critical of all elections in 2012 when the non-Islamist opposition failed to rally behind a single candidate. This move fragmented the vote and left the arena ripe for regime holdout Ahmed Shafik and the Muslim Brotherhood candidate Mohamed Morsi, who legally won the only democratic poll Egypt ever had, but ultimately lost against the deep state.

In 2018, it is unlikely that the opposition will manage to iron out all their differences, especially in light of the elephant in the room: the almost near absence of any guarantees about the integrity of the race. "Either we receive real assurances guaranteeing transparent, democratic elections, or all political forces will have a unified stance on the matter," Ali reportedly said during the press conference.

His words open a whole other can of worms. How do you guarantee electoral transparency if you are dealing with an incumbent who controls all state institutions, including a rubberstamp parliament.

To add insult to injury, the National Electoral Commission (NEC), the body authorised to supervise referenda, presidential, parliamentarian and municipal elections, is also regulated by a law that El-Sisi approved last August.

Breaking: #Egypt’s Khaled Ali announces he is running in 2018 presidential race.
The best thing happened to #Sisi since a long time!

This law stipulates that the 10-member board, which prepares and reviews voter databases and makes decisions on the eligibility of candidates, are nominated by the Higher Council Judges (HCJ), pending the approval of the president.

Superficially, this may appear to be an independent body, but practically and according to precedents proving the cooption of the judicial arm by the executive authority, this independence is extremely suspect.

Even if we assume that the incumbent will play no role in the HCJ's nominations, the president still has the power to veto the council's nominations to guarantee a commission that will do its bidding.

Once again, Egypt's political forces are at a crossroads: should they participate in an absurd form of role play, as Hamdeen Sabbahy did in 2014 when he ran against El-Sisi in a so-called election whose undisputed results were a foregone conclusion? Or should they boycott the process from the outset so as not to lend legitimacy to a sham process, which lacks the very basic tenets of a free and fair democratic race?

To me the answer is clear. Sometimes it's right to throw the baby out with the bathwater if only to make a point that you reject the perpetuation of an illegitimate status quo.

Two wrongs don't make a right. Participating in this election in any way, shape or form is not a display of political proactivity in a democratic process.

At best it's a display of relapsing naiveté about the reality of Egypt's political cesspool, and at worst, it's a betrayal of the fundamental spirit of the January uprising, whose goal was to sound the death knell of military rule and guarantee future civilian governments in peaceful rotation.

Photo: A man places his finger in the customary purple voting ink (AA). 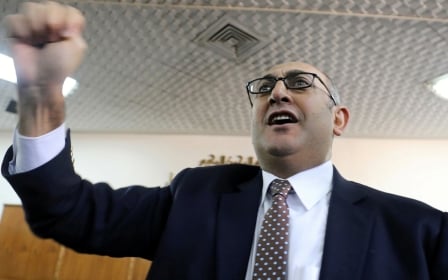 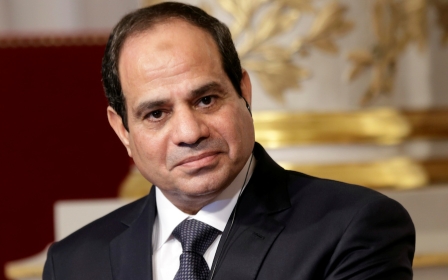