The Mockingjay of Palestine: ‘If we burn, you burn with us’ 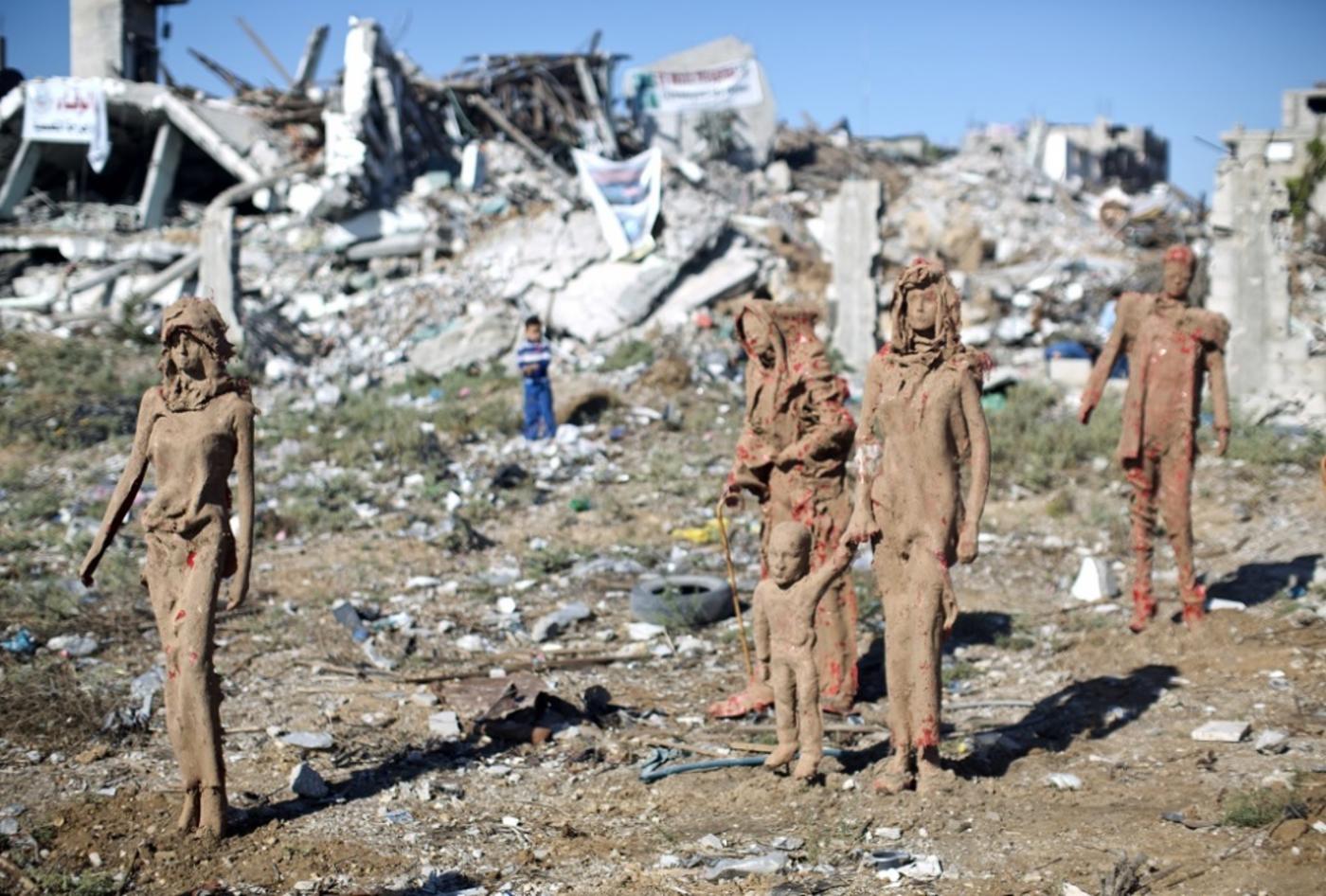 Raed Mu’anis was my best friend. The small scar on top of his left eyebrow was my doing at the age of five. I urged him to quit hanging on a rope where my mother was drying our laundry. He wouldn’t listen, so I threw a rock at him.

I didn’t mean for the rock hit him, but it did. My father dragged me to Raed’s house kicking and screaming to apologize, while carrying a red rubber ball and a small doll as gifts. I was mostly embarrassed that I hurt my best friend.

Several years later, Raed - now 15 - was shot by Israeli soldiers as he helped our neighbours dig a grave for a kindly man who was killed by Israeli troops earlier in the day, while performing Eid prayers.

On that day, my father had taken us to extend holiday greetings to relatives in a nearby refugee camp in Gaza when the ‘Eid Massacre’ took place in my home camp of Nuseirat.

Every holiday there seemed to be a massacre. Nuseirat - the rebellious camp of resilient refugees - was chosen to be taught a lesson on that particular Muslim holiday. Raed was one of that day’s many victims. Six were killed and scores of others wounded.

A friend told me that Raed was bleeding profusely as he ramblingly moved around shortly after the Israeli army chopper shot him. He arrived at my house, which was adjacent to the graveyard, and desperately knocked at the door yelling my mother’s name: “Auntie Zarefah, please open the door!”

But my mother was already dead. In Raed’s wounded state he forgot that she was buried in the ‘martyrs’ graveyard’ where my grandparents, both refugees from historic Palestine, had also been laid to rest. The tiny grave of my oldest brother, Anwar was also there. He died at the age of two because my father had no money to treat him at a proper hospital. Raed is now buried only a few feet away.

I could have never imagined myself drawing parallels between Nuseirat, and its heroic people, and a Hollywood movie; the struggle of my people is too sacred to make such comparisons. But I couldn’t help it as I watched the latest from the Hunger Games franchise, ‘Mockingjay’.

A feeling of anger initially overwhelmed me when I saw the districts destroyed by the heartless rulers of the Capitol. As I watched the movie, not only resistance of Palestine, but particularly that of Gaza, was on my mind.

The Capitol - with unmatched military technology and access to an enormous media apparatus - was unstoppable in its brutality. Its rulers, who claimed to have superiority over all the inhabitants of the dystopia of Panem, had no moral boundaries whatsoever.

The Hunger Games, the story’s version of a reality television show, was created as an annual event to celebrate the victory of Capitol over a previous revolt by the districts. It also served as a reminder of what the Capitol was capable of, if anyone dared to rise up again in the future.

The show’s participants - mostly children who were chosen or volunteered in a process called the ‘reaping’ - came from every district. The contestants had to kill one another for the amusement of the Capitol, which drew its strength from the division and oppression of others.

But the districts rebelled. And they ought to have done.

They resisted because there can be no other response to systematic oppression but resistance. District 13 was annihilated early on so that the rest of the districts dare not entertain any ideas aside from the Capitol’s insistence that resistance is futile. Panem’s ruthless president was adamant at referring to those who defied the Capitol as “radicals,” and not “rebels.” At times, the Capitol tried to turn the districts against one another, inciting civil war.

The Gaza connection became too stark to miss when Katniss, one of the early ‘tributes’ and the symbolic ‘Mockingjay’ of the resistance uttered these words soon after the Capitol bombers destroyed a hospital full of unarmed men, women and children, killing everyone: “I want to tell the people that if you think for one second the Capitol will treat us fairly if there's a cease-fire, you're deluding yourself. Because you know who they are and what they do.”

The similarities in this drama were eerily similar to the bombing and complete destruction of al-Wafa hospital in Gaza in late July of this year - the only rehabilitation centre in the strip for thousands of victims of previous Israeli atrocities.

Her message to the Capitol: “You can torture us and bomb us and burn our districts to the ground, but do you see that? Fire is catching! And if we burn, you burn with us!”

It is as if the author of the Hunger Games, Suzanne Collins, knew so much about Gaza. As if she had fashioned her stories to tell of a real fight between a brutal Capitol, called Israel, and rebellious districts called Palestine. It is as if Gaza was the inspiration behind District 13 because despite attempts at repeated annihilation for the last 65 years - and in particular the last two genocidal wars in 2008-9 and 2014 - the resistance is still alive.

Does Collins know that Katniss, who didn’t choose such a fate, but had to step up in defence of her people, is represented in thousands of men, women, and yes, children of Gaza?

Does she know that her stories were already written and enacted by real people, who may never have heard of her franchise and may never live to watch her movies? Does she know that criminal leaders such as President Snow are not something of fantasy, but they actually exist, here today in the persons of Benjamin Netanyahu and countless other Israeli leaders who call for the absolute annihilation of Gazans at a whim?

As for Gaza’s Hunger Games, the similarities are uncanny.

Just before Israel imposed sever economic sanctions on Gaza, to punish Palestinians for the result of their democratic elections, top Israeli government advisor, Dov Weisglass made a spine-chilling promise in 2006: “The idea is to put the Palestinians on a diet, but not to make them die of hunger.” This was not a passing statement.

After much legal wrangling, an Israeli human rights group, Gisha, managed to obtain documents which showed that since then Israel has enacted a “deliberate policy of near-starvation” in Gaza and that “security” had nothing to do with the Gaza blockade.

In Israel’s Operation Cast Lead, over 1,400 Palestinians were killed and 5,500 wounded. But in Israel’s latest war the price tag for resistance was increased to 2,137. More are still dying from their wounds.

Yet the resistance has not been defeated in Gaza. Because resistance is not men and women with guns. Resistance is an idea, pure in its intentions, romantic, at times, maybe, but certainly the work of an entire collective, who has chosen to die fighting, if they must, but never live carrying the shackles of a slave.

Not even the chilling words of Moshe Feiglin, deputy speaker of the Israeli parliament (Knesset) were enough to intimidate Gaza. In his Facebook plan to destroy the resistance on 1 August, 2014, Feiglin called for the, “conquest of the entire Gaza Strip, and annihilation of all fighting forces and their supporters.” He then went on to call for all its remaining inhabitants to be pushed into concentration camps near the Sinai desert.

“In these areas, tent encampments will be established, until relevant emigration destinations are determined,” Feiglin wrote.

Feiglin, and his prime minister, Benjamin Netanyahu - among many others in Israel’s political and military establishment - are real life leaders of the Capitol, which is allowed to operate with complete impunity against the oppressed districts of Palestine.

And like the Mockingjay, which was resurrected against great odds, Gaza will remain the rebellious district. The blood of its “near-starved” children will someday unite all districts against the Capitol. Then, all the voices that doubted the wisdom of the resistance will be diminished by the loud, but harmonious chanting of a united people. As the resistance continues, Palestinians everywhere will express their victory and defiance by raising four fingers, Egypt’s ‘raba’a’ - just as the rebels of the 13 districts expressed by raising three.

Till then, the Mockingjay of Palestine, and the thousands of living martyrs will continue to circulate the skies singing the same song as the people of the districts do:

“Are you, Are you

Coming to the tree

Where I told you to run, so we'd both be free

No stranger would it be

If we met up at midnight in the hanging tree.”

If only the other districts would rise…

Photo Credit: Statues by Palestinian artist Eyad Sabbah,40, stand amidst the rubble of buildings destroyed during the 50 days of conflict between Israel and Hamas last summer, in the Shejaiya neighborhood of Gaza City on October 21, 2014 (AFP)