My husband faced death on hunger strike, but I support his fight against Israeli occupation

Randa Musa
Awaiting trial in an Israeli prison, Khader Adnan has been refusing food for two months to protest ‘the essence of detention’ 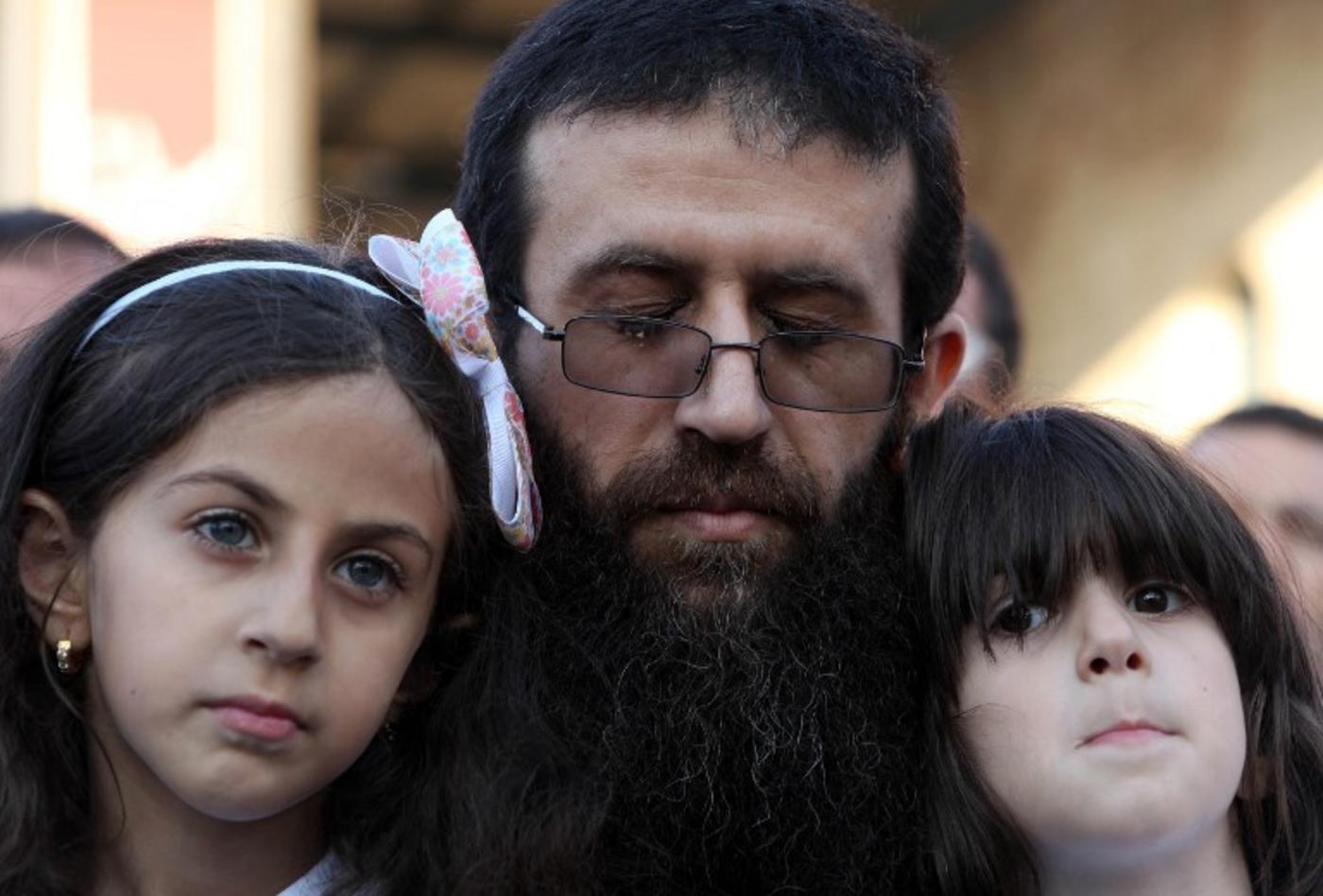 On Monday, Khader Adnan ended his hunger strike after an Israeli military court sentenced him to one year in prison. He has already served 10 months so is due to be released in December. The following piece was written before the ruling.

ARRABEH, Jenin, occupied West Bank - For the past 58 days, my husband, Khader Adnan, has refused a single morsel of food. He has not had anything to drink except water. On Sunday, he stopped drinking water, too.

Once again, Khader has chosen to bravely resist the illegality and barbarity of the Israeli occupation using the only weapon available to him inside Israeli prisons: his body.

He knew that he could end up paying for his belief in the right to resist occupation with his life. Yet, he announced an open-ended hunger strike on 2 September until he attains his freedom.

My husband is tasting death at every moment as I write this. His life is hanging by a thread. No one knows how long he has left to live.

A prominent political activist, Khader has been imprisoned 11 times - both by the Israeli occupation and by the Palestinian Authority (PA). He has undergone countless hunger strikes of varying lengths to free himself from the shackles of injustice. His courage to fight both entities has made him an enemy of the two.

When I get a notification on my phone, I am afflicted with a sense of hysteria until I see what’s on my screen. I fear receiving news of his passing

This is the third major hunger strike that my beloved husband has undergone in the past six years. He was released from Israeli prisons in 2012 after rejecting food for 66 days and in 2015 for 56 days. Khader emerged victorious both times, and I have faith that he will this time, too.

Though we have been married since 2005, we have not spent more than five years in the physical presence of one another.

When I get a notification on my phone, I am afflicted with a sense of hysteria until I see what’s on my screen. I fear receiving news of his passing. I talk to myself constantly. I tell myself, “Stay strong, Randa.”

‘We find life in resisting the occupation’

Before he embarked on this latest hunger strike, I asked him, “How? You know what will happen to your body on the 12th, 20th, 50th day. You have felt the pain and pangs of hunger; the vomiting and loss of hearing; the feeling of your stomach devouring itself. How are you able to do it all over again?”

His answer to me was touching: “How does a woman choose to give birth more than once, despite having felt the pain? There is beauty and love in giving life, just as we find life in resisting the occupation, in knowing the taste of freedom and being able to fight for it.”

Khader Adnan is not just a leader in Islamic Jihad. When Khader goes out on the street, people gather to listen. He is one with the people. Since he has experienced the ugliest and darkest elements of this occupation, he inevitably speaks from his heart.

While the past two times he was protesting against the occupation’s inhumane policy of administrative detention - imprisoning Palestinians without trial or charge indefinitely - this time is different. There is a court case against him, though his trial has been repeatedly postponed since his arrest on 10 December.

Many have criticised him for choosing to go on hunger strike against a court case; they described it as a death wish. Rights organisations told me that they would not support me if he did this. But who are they to choose or decide what he protests against? Who are they to decide that what the occupation is doing is legal? He has been in prison for almost a year, and no ruling has been issued.

They would refuse the violations of our freedoms, our dignity and our humanity. He believes that his life is worthless if his freedom is stolen from him - if he is not present with his family. He used to tell me, “One moment with you and the children counters all the pain that I suffer during my hunger strike.”

Although I was never so involved in politics, I am obliged to defend and speak on behalf of my husband as he lies on a hospital bed in the occupation’s Ramle prison hospital. But it is not easy. When I speak to the media or to NGOs and rights groups, tears sting my eyes.

I see the emotional and psychological impacts on my children from one hunger strike to the next. They are easily agitated, emotional and irritable. I know much of this comes from the constant state of anger and worry that I am in. As much as I try to keep a light and familial atmosphere in the house, it is very difficult. It’s hard to hide the fear and pain inside of you.

When Khader is in prison and on hunger strike, I see a drop in their grades at school. My son came home from school one day and started beating his brothers. I asked him why he was doing this; he told me that the boys in his school said his father was going to die. “Your dad is on hunger strike, he’s going to die,” they said.

Although I am bearing the brunt of his absence and the fear of losing him, I support him on this journey. As a family, we believe in love for the land. We believe in sacrifice for our land

The feeling that you could lose someone you love at any moment - a person who is a brother, a husband, a friend, the father of your children - is almost unbearable.

People label him and see him as a fanatic religious man because he has a long beard. Khader sits on the ground and plays with his children, we clean the bathrooms hand-in-hand, he mops the floors, he blow-dries my hair and removes my blackheads. We have a shared life. He is my soulmate.

Although I am bearing the brunt of his absence and the fear of losing him, I support him on this journey. As a family, we believe in love for the land. We believe in sacrifice for our land. Our homeland is in need of people like Khader.

Photo: Khader Adnan reflects with his daughters in the West Bank village of Arrabeh after being released from prison on 12 July 2015 (AFP)