The next Intifada: A struggle against the Bantustans

Jamal Juma
Young people are the protagonists in this rebellion. With every wave of protests they are building new grassroots structures of resistance 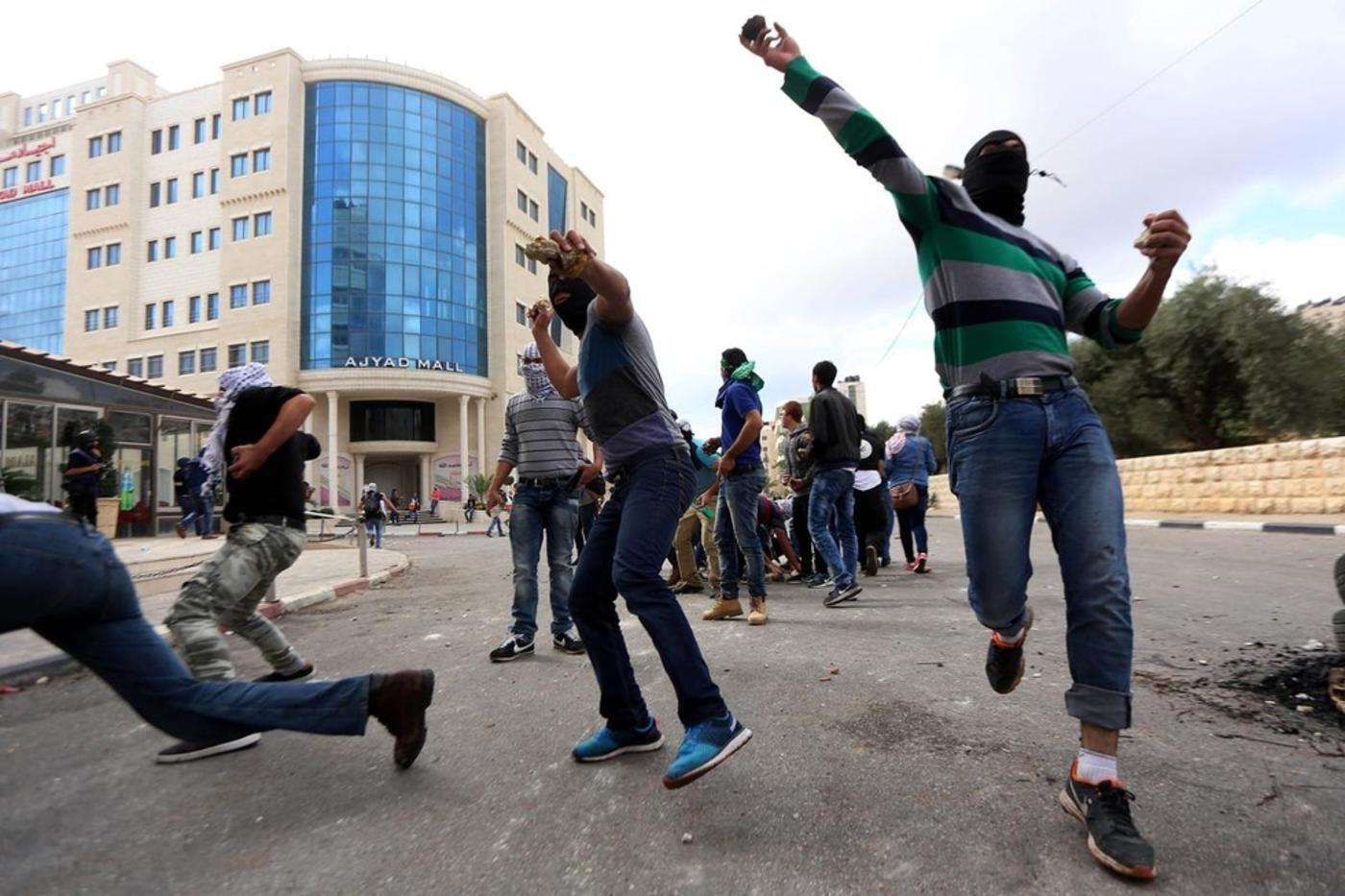 The past few days in Palestine have evoked images of the First Intifada. Burning tyres in the streets, youth wrapped in Palestinian scarves throwing stones, and Israeli military confronting them with tear gas, sound grenades and live ammunition. Entire Palestinian villages are under siege. Clashes are spreading like wild fire across Jerusalem and Palestinian areas on both sides of the Green Line.

The root causes for this rebellion are the same as ever: the Israeli regime of occupation, apartheid and colonialism makes Palestinians’ lives unbearable. However, there are fundamental differences between now and then, and the actions of Israel’s new settler militia will determine when, not if, a full scale Intifada will explode.

The most visible difference between the reality on the ground in the first and second Intifadas is the prominent role of Israeli settlers in the attacks on Palestinians. The settler population has become a well-armed, well-organised and ideologically driven militia. They maraud in Palestinian villages and attack Palestinians in the streets and even in their homes. From last year’s horrific burning alive of young Muhammad Abu Khdeir in Jerusalem to the recent arson attack on the Dawabshah’s home in Duma, murdering the parents and a toddler, settlers have carried out a string of terror attacks on Palestinians. Israel maintains and supports this fanatic militia to carry out the dirtiest parts of Israeli aggression and repression in the West Bank.

Israeli Prime Minister Netanyahu’s initial rhetoric about an “all-out war” including the re-occupation of the major Palestinian residential areas in the West Bank, defined by the Oslo Agreement as Area A, pleased this settler militia and their parties in the government. However, as the Israeli military and intelligence agencies were quick to point out, massive military deployment into Area A is neither in the interest of the settlers nor the rest of Israel’s political establishment. They all have a common aim: expelling as many Palestinians as possible from Jerusalem and the rest of the West Bank to the walled-in Bantustans they have created. This is best served by concentrating pressure outside these Bantustans.

Following a similar logic to the massacres of the Palestinian people in Gaza, Israel attacks from the perimeters. The ghettos stay under Palestinian control while Israel makes life unbearable in the remaining 60 percent of the West Bank through the construction of the apartheid wall, home demolitions, immediate threat of destruction of 89 communities, denial of access to water, checkpoints, land confiscation and settler attacks.

These policies impact Palestinian resistance. Palestinians under immediate threat of ethnic cleansing are at the forefront of the protests. Young Palestinians in Jerusalem continue their mission of “shaking off” the oppressive Israeli grip on their economy, schools and homes. Nothing intimidates them; not point-blank killings nor the new law punishing stone throwing with up to 20 years of imprisonment.

If anything, the ever-tightening repression is the reason why Palestinian youth from Jerusalem are most often the ones carrying out the current stabbing attacks. Since the burning of Mohammed Abu Khdeir, the Jerusalem Intifada has been ongoing. In the rest of the West Bank, periodic waves of protests have come and gone in an ever rising tide. In the last week, seven youth have been killed and almost 800 Palestinians have been injured. Palestinians inside the Green Line, who face virulent racism and institutional apartheid and ethnic cleansing policies, have organised protests in their cities and towns.

Palestinians residing in Area A in the West Bank, with the exception of the refugee camps, have largely kept away from the mobilisation so far. For many of them, the complete vacuum of political leadership still weighs too heavy to get involved. Neither the Palestinian National Authority (PNA) nor the Palestinian political parties are able to offer any strategic directions in the face of the Israeli rejection of a Palestinian state. They cannot deliver the demands for Palestinian self-determination including the right of return and an end of apartheid for the Palestinian citizens of Israel. They have failed to create structures to defend their people.

Revolt against Israel and PA

The current outbreak of protests is not solely directed at Israel. It is also a manifestation of the frustration of the people who face the brunt of Israeli aggression in the West Bank. Their protests express an overall desire to end ineffective and inept representation.

The PA is aware of this anger. Mahmoud Abbas’ recent speech at the United Nations cautioning that Israeli policies “threaten to undermine the structure of the Palestinian National Authority and even end its existence” was nothing more than a plea to Israel and its supporters to not completely erode the PA’s ability to exercise control in the Area A Bantustans. The current wave of protests may even serve to underline his point that the PNA is central for Israel’s plan of ethnic cleansing and the Bantustanisation of the West Bank in the short term.

Ultimately, the current power sharing between the Israeli occupation and the PA as guarantor of stability in Area A Bantustans will not last. In order for the PA to maintain a minimum of credibility in front of its people, it must mimic a national movement for liberation by ending security coordination with Israel, stopping economic agreements with Israel, calling for full boycott, divestment, and sanctions to isolate Israel’s colonial apartheid regime, and protect the people. If the PNA does so, Israel will crush it. If it fails to deliver this minimum programme, the Palestinian people will rise up.

The entire political, social and economic context is readying the Palestinian population for this uprising. Supporters of the two-state solution have lost hope in a Palestinian state. The economic situation continues to rapidly deteriorate, even in Area A. Unemployment rises as despair skyrockets. People seek dignity and a future for themselves, they seek freedom and independence for their nation, and they are willing to pay the price. Young people are the protagonists in this rebellion. With every wave of protests they are building new grassroots structures of resistance.

It is yet to be seen if Israel and the PA are able to control the current upsurge of rebellion. Two days ago, Israeli-Palestinian security agencies agreed to calm the situation, Netanyahu and Abbas made statements calling for an end to confrontations. Yet today, more protests than ever exploded all over the West Bank and inside the Green Line while the settlers are once again out in the streets attacking Palestinians.

The real question is not whether a third Intifada will come but rather when it will be strong enough to last. The deciding factor is Israel’s settler colonial project. Even in the absence of an effective Palestinian leadership, if the settlers and their state continue to attack the Palestinian people, we will see the emergence of a full Intifada built on grassroots organising sooner rather than later.

- Jamal Juma was born in Jerusalem and attended Birzeit University, where he became politically active. Since the first Intifada, he has focused on grassroots activism.  Since 2002 he is the coordinator of the Palestinian Grassroots Anti-Apartheid Wall Campaign and since 2012 the coordinator of the Land Defence Coalition, a network of Palestinian grassroots movements. He has been invited to address numerous civil society and UN conferences, where he has spoken on the issue of Palestine and the Apartheid Wall. His articles and interviews are widely disseminated and translated into several languages.

Photo: Palestinian protesters clash with Israeli soldiers during a protest against preventing Palestinians from entering the Al-Aqsa Mosque compound, on 8 October, 2015, near a checkpoint of an Israeli settlement in Beit El, West Bank. (AA) 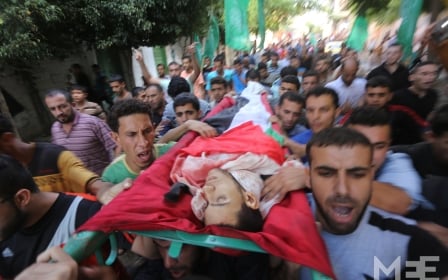 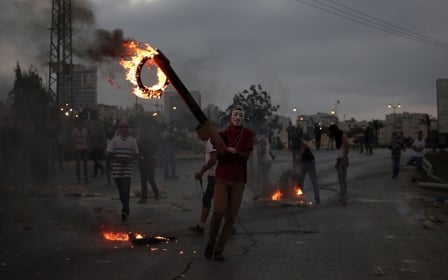 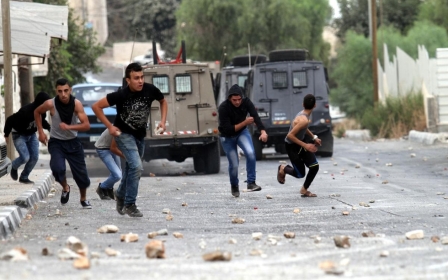