‘Pieces of wood’: The slave trade, the Zong and the migrant tragedy

Joe Gill
Free trade economics, political destabilisation and militarised foreign policy have created a migrant crisis for which Europe must carry the can 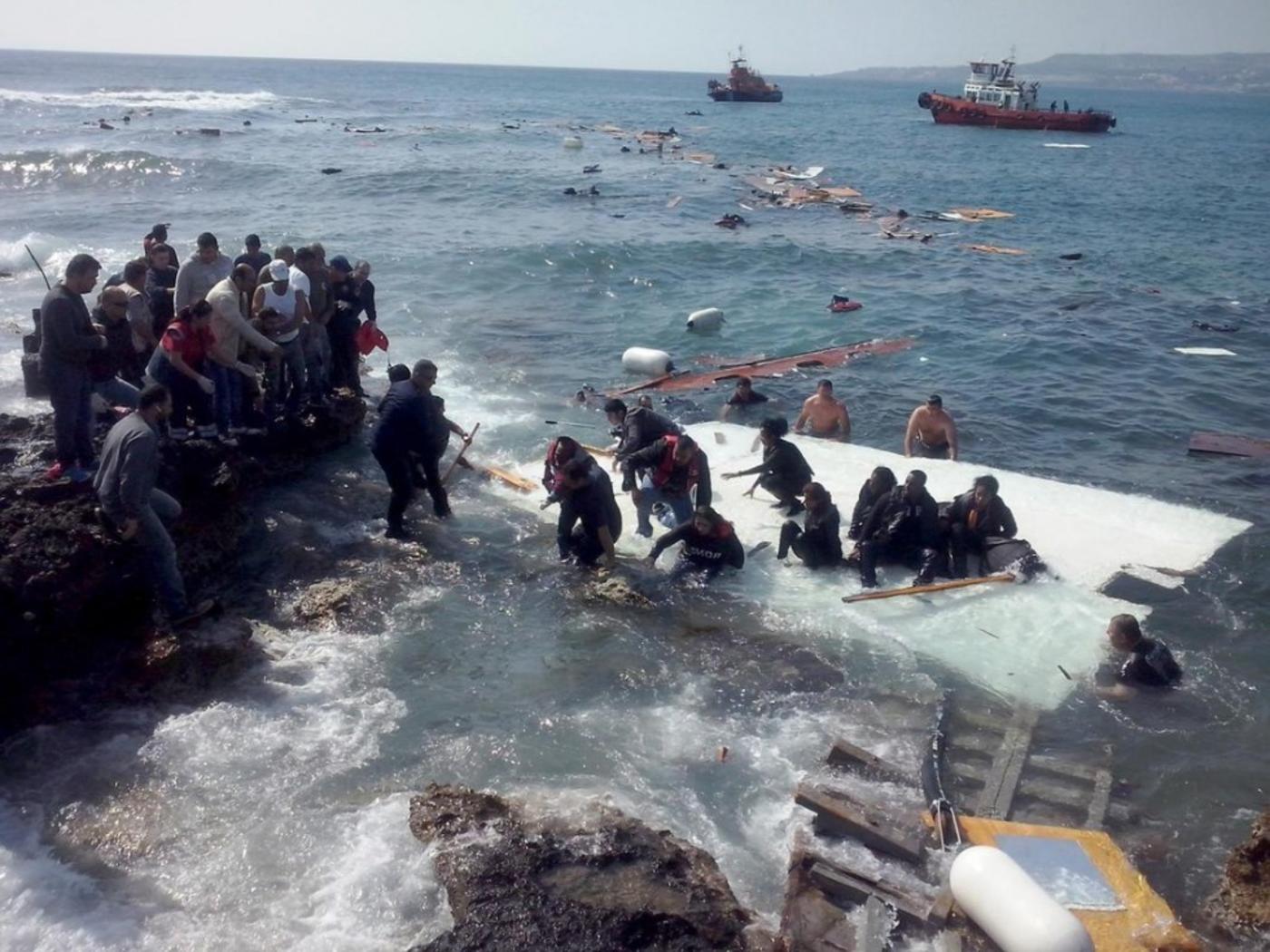 Katie Hopkins' timing was poor. Two days before yet another 700 men, women and children drowned in the Mediterranean due to the escalating migrant crisis, the hate-spewing tabloid provocateur described the victims of this disaster as “cockroaches”. Her solution to the massive flow of desperate people from Africa and the Middle East, escaping war, dictatorship and poverty, is simple: “Bring on the gunships, force migrants back to their shores and burn the boats.”

Hopkins' view has legions of fans across the European Union, where governments, led by the UK, cut off support for the Mare Nostrum rescue programme last year that had saved 170,000 lives. But the moral question of how “we” Europeans should respond to the migrant crisis is not only the immediate one of restoring a rescue programme to stop this slaughter.

To answer those who see migrants as a dehumanised plague come to disturb our civilised idyll, we need to look to the underlying economic system that produces “surplus” populations, using them as cheap or free labour when convenient, while at the same time denying them full humanity. In a world of human trafficking and surplus humans being thrown overboard on the high seas, we appear to be right back into the politics of the 18th century slave trade.

When Luke Collingwood, the captain of the slave ship Zong, arrived in Jamaica in 1781 after a gruelling Atlantic crossing from Africa with a shipload of slaves, he filed an insurance claim for the loss of 132 of his human cargo. During the crossing, he had ordered the throwing overboard of these slaves due, it was claimed, to a shortage of water for the slaves and crew.

The insurers disputed the claim, and the case made its way to the British High Court. Leading abolitionists Olaudah Equiano and Granville Sharp used the deaths of the slaves to raise public awareness about the horrors of the slave trade and advance the anti-slavery cause. Sharp wanted to have criminal charges brought against Collingwood and the owners but was unsuccessful. According to the Solicitor General, Justice John Lee, it was “madness” to call these “honourable men” murderers, “Blacks are goods and property… The case is the same as if wood had been thrown overboard.”

In the intervening centuries, slavery has been abolished throughout the world, but human trafficking is as rife as ever.

In that era, as much as our own, a model of globalisation was being shaped by the major economic powers of the day. The triangle of trade in slaves for goods in Africa, to slavery for profit in the plantation economies of America, to the consumption of the new commodities in north America and Europe, was the model on which a system of prosperity - and superexploitation - was built.

Then, economists such as Adam Smith and Montesquieu proselytised that a new model of free trade would enable enlightened self-interest to bring universal prosperity, eclipsing the old systems of feudal poverty, restricted trade and monopolies.

As Montesquieu put it in his Spirit of Laws (1748): “The spirit of trade produces in the mind of a man a certain sense of exact justice, opposite … to robbery… the spirit of commerce is naturally attended with that of frugality, economy, moderation, labour, prudence, tranquility, order and rule. So long as this spirit subsists, the riches it produces have no bad effect.”

It is remarkable how this mythical version of free trade has survived to this day, in spite of a reality that bares no relation to the model. In the face of oligarchy and corporate dominance of global markets, the theory of competition has helped to justify so-called ‘free trade’ policies that have opened up regions and countries, many of them former colonies of European powers, to capture by global corporations. Assisted by ‘free trade pacts’ and IMF structural adjustment, they are able to extract vast profit from these “emerging markets”.

On the surface, there is little to compare the world of 1780 - when the great imperial powers of England, France, Spain and Holland carved world trade up with the old-fashioned persuasive force of overwhelming naval power – to now. When we look at the calamity taking place within miles of the European shoreline today, it is not immediately obvious how it relates to this historical carve-up.

For this we must turn to alternative theories to the free market orthodoxy, which more accurately describe a world in which millions must flee violence, tyranny and destitution in order to face drowning in the Mediterranean. David Graeber, the radical anthropologist who coined the term “the 1 percent” during the 2011 Occupy protests, deconstructed the myth of free market trade in his seminal work Debt: The First 5000 Years.

By examining pioneering studies of tribal cultures and the early emergence of the money economy in Mesopotamia, he shows how debt and credit historically appeared before money. This is the inverse of the narrative given in economics texts dating back to Adam Smith, which as Graeber shows, provided no evidence whatsoever for the theory of the emergence of money and trade out of voluntary barter.

Underlying this new narrative of how “free trade” emerged, is the stark pattern of indebtedness leading to debtor enslavement, the handing over human beings to creditors and the expansion of the debt-money system through war and conquest. Out of this “trade” in human beings for unpaid debt emerged the concept of money – the first unit of currency being a human person.

Graeber argues that it was in the Greco-Roman era that the traditional “gift economy” of communal subsistence was gradually replaced by the growth of a "military–coinage–slave complex", due to the wars and mass seizure of captives by the imperial armies of the time. Obligations to pay taxes in the coinage of these empires – rather like repaying an IMF loan in dollars - helped increase debt and enslavement.

And so, thanks to Graeber, we can begin to understand how an imperial system of war and slavery is intimately tied to the emergence of the commercial money economy. Expropriation of lands and resources produces ever larger numbers of people who have lost their traditional means of subsistence tied to ancestral lands and so become chattels, or, in modern parlance, destitute migrants.

The Atlantic slave trade, a system of war and plunder for profit, was just the flip-side of the new free trade economy exalted by Montesquieu and Smith. In the 21st century, while there are no new frontiers for the buccaneers and plunderers to conquer, there are still nation states waiting to be dismantled for profit. It might appear absurd to suggest that any modern corporate executive, politician or adventurer-entrepreneur would propose that starting a war, or overthrowing a tightly run dictatorship, might give rise to new sources of profits. But it was Marx who memorably wrote that "the capitalist will wade knee deep in blood for a profit of 300 percent".

Ever since the end of the Cold War, we have witnessed a violent process of destabilisation, taking on a variety of forms from invasion to sanctions to the funding of rebel opposition groups, that has led to the wars and upheavals that have brought chaos to Africa and the Middle East. While these are catastrophic events for the people who experience them, for some – arms manufacturers, security consultants, former British prime ministers - they have been extremely profitable.

The traffic in human beings, like that in weapons, emerges seamlessly from the collapse of states, which in the case of Iraq, Libya, Syria, Somalia, and Gaza, emerge from the shock doctrine policies engineered from Washington, London, Paris, Tel Aviv and Riyadh. Several of the states that in the post-colonial years achieved political and economic independence, and kept the forces of neoliberalism at bay, have been targeted, toppled or destroyed since 1991.

The intimate link between the mass flow of human beings out of Africa, and a policy framework of “disaster capitalism” – Naomi Klein’s description of turning catastrophes to profit - is the reason why European rulers, like the judges of 18th century England, have a moral and political responsibility to respond to the tragedy unfolding in the Mediterranean. (A similar process leads to hundreds of migrant deaths in the Mexican desert each year due to the violent destabilisation of central America by the United States over many decades.)

EU trade and aid policies in Africa, arms sales to regimes across the region, military alliances with the Gulf monarchies and Israel, the refusal to seek a solution to the Syrian conflict (other than to repeat inanely from day one the futile line "Assad must go"); gung-ho support for the Libyan rebels and the “liberating” of vast quantities of weapons to be used by militants all across North Africa and the Middle East. The list goes on.

This is not to absolve the people traffickers - the modern day equivalents of Captain Collinwood - nor the dictatorship in Eritrea, from which thousands are fleeing, nor for that matter, Syrian President Bashar al Assad, for the barrel bombs that drive his people into the hands of people traffickers.

The Mediterranean is the modern Middle Passage, where countless migrants, forced from their homes by economic destitution and terror, are once again thrown into the sea like “pieces of wood”.

Any amelioration and rescue operations to save lives will be welcome. But turning back this tide of chaos and desperation will take more than a few more ships plying the shores of Libya.

- Joe Gill has lived and worked as a journalist in Oman, London, Venezuela and the US, for newspapers including Financial Times, Brand Republic, Morning Star and Caracas Daily Journal. His Masters was in Politics of the World Economy at the London School of Economics.

Photo: Illegal migrants on Zefyros beach after a sailboat ran aground off the Greek island of Rhodes, in Greece leaving at least three dead on 20 April 2015 (AA) 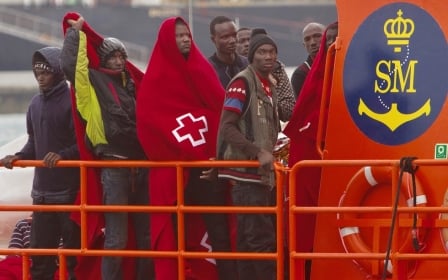