The Shia jihad and the death of Syria’s army 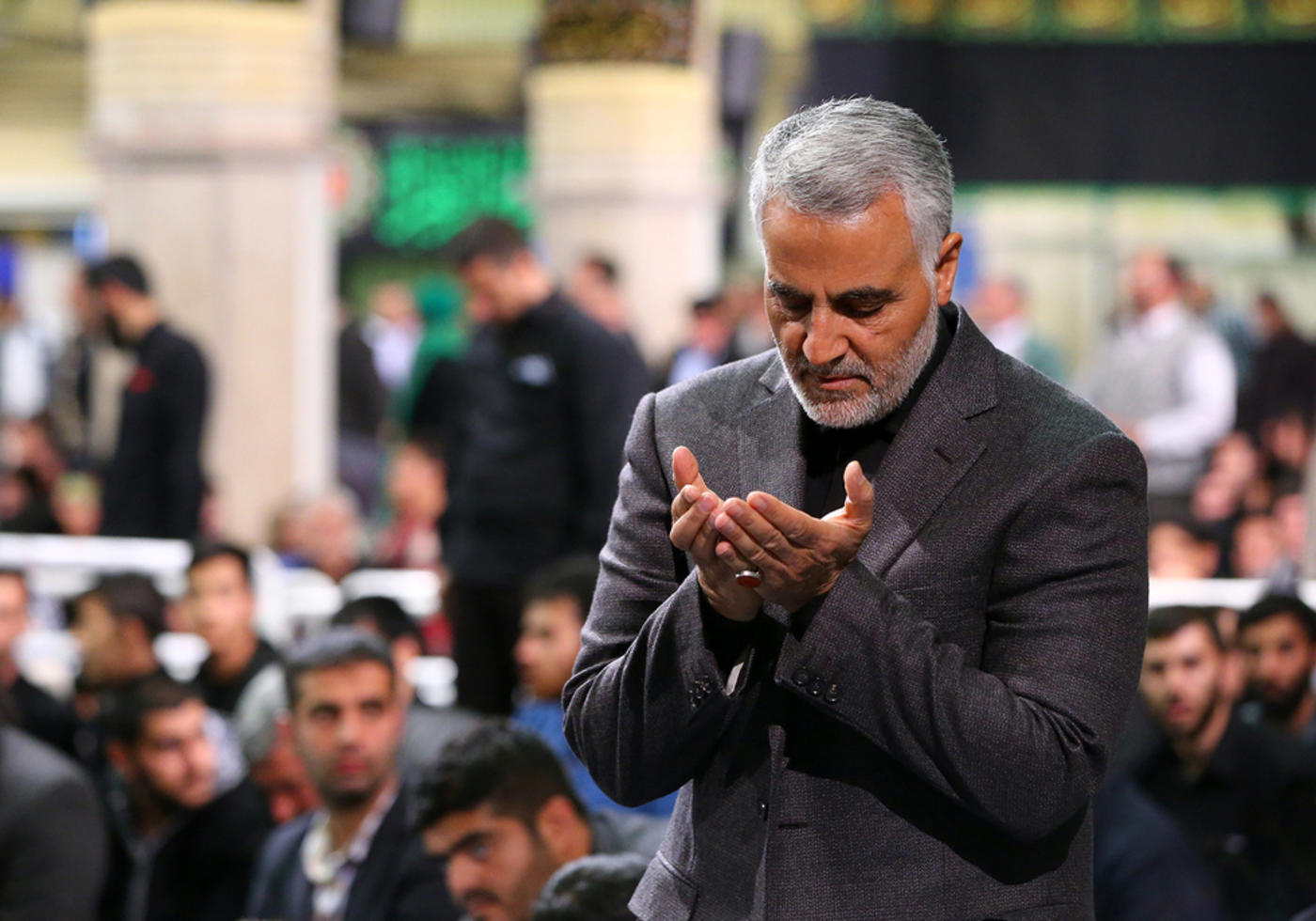 It was a hot July day in Ramadan when Khaled al-Shami saw an opportunity to flee Division 9 in Daraa, southern Syria, the place that had been his army barracks for the past four years.

One month before two soldiers like him had taken the same route, but had been spotted: one was gunned down and killed; the other was wounded and died as he was run over by the pursuing forces of Syrian President Bashar al-Assad.

Their fate ran round and round Shami's head as he slipped out of the headquarters, while his friend distracted the guards. He walked five kilometres before he met soldiers from Saif Al Sham, a group in the Free Syrian Army’s Southern Front with whom he had been coordinating his defection.

It was two months before he was able to leave Syria and cross into Jordan. I met him in Amman and asked him about conditions inside Assad’s forces.

“I was living in a nightmare,” he said. “I need a software change after everything I saw and experienced. Most people like me want to leave, but it’s the overwhelming fear that stops you”.

He described what life was like inside Assad’s army.

“One important thing to realise is that there is no Syrian Army anymore, it is just militias, mostly Iranians and Lebanese.”

Division 9 is the largest and most important military force for Assad in southern Syria. It houses the only tank division, and has around 4,000 troops within four brigades.

Shabiha is the name for the Alawite paramilitary force known for its brutality and sectarian nature. Khaled described the dynamics between these different fighting elements: “The Iranians and Hezbollah are not under the control of the Syrian Army, the exact opposite.”

He described how troops were organised and deployed: “Ten high-ranking Iranian officers control the division, they plan the operations. Only Iranian or Hezbollah forces can access operations rooms, no Syrian soldiers are allowed in."

For battles, groups of 50 fighters are deployed: 15 IRGC, 15 Hezbollah, 20 Syrians, the majority of which are shabiha. Within battles the hierarchy is clear: the commander is an Iranian IRGC officer and his deputy will be a Hezbollah officer, according to Khaled.

A Syrian officer who defected and is now in Amman, who asked to remain anonymous, recounted comments to me from a friend who remains an officer in Assad’s forces: “We are in the fifth class,” he said. “Even the civilian Lebanese militia have the power to tell a Syrian general what to do, to send him back to his office. They have better food than us, better weapons and more respect.”

He described how Syrians are now isolated from military activities and have no trust: “The militia are running the show nowadays. These militia believe they are there to defend Syria when the regular army has failed, so they treat us as failures with no respect.”

The difference in pay between the groups is stark: Khaled was paid $60 a month as a regular Syrian soldier, while the shabiha were paid three times as much at $180 a month. Lebanese Hezbollah were paid around $400.

Major Abu Osama al-Jolani, a Free Syrian Army (FSA) commander and defected officer, told me how the war has changed over the past 12 months.

“The Shia militias are leading military action to support the regime in all battles for the last year … Everyone we are fighting now are foreigners.”

Christopher Kozak, at the Institute for the Study of War, wrote back in December 2014 how “defections, desertions and over 44,000 combat fatalities” had significantly reduced Assad’s forces.

He said critical pressure remains due to grumblings within the regime’s Alawi support base who “have exhibited growing signs of dissatisfaction with the Syrian regime”.

Assad publically admitted he had a manpower shortage in a speech in July this year: “The army’s energy is manpower, and if we want the army to give its best, then we need to give it our best.” 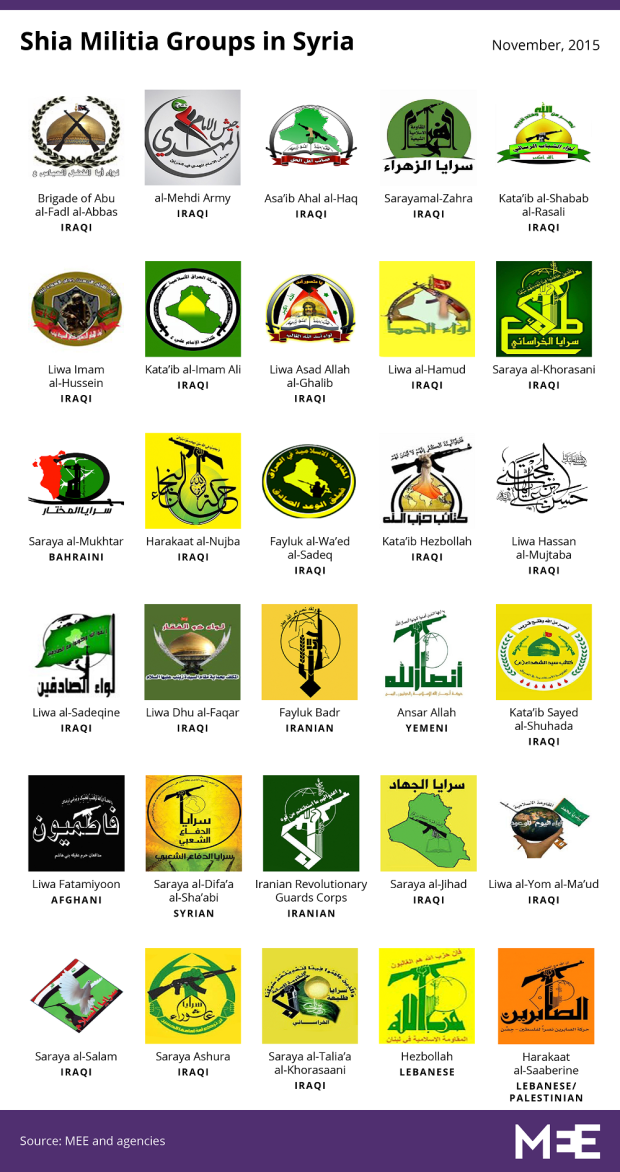 The influx of foreign fighters, many of whom are coming to Syria to fight Shia jihad, adds a dangerous sectarian character to Assad’s forces.

Khaled recounted stories of how they occupy mosques in areas they control, removing Sunni icons and putting up pictures of Shia figureheads such as the late Iranian Ayatollah Ruhollah Khomeini and Lebanese Hezbollah leader Hassan Nasrallah in their place.

“Their strategy is to spread the Shia religion. When they occupy the mosques they prevent Sunnis from praying there. They even blow up the mosque if they think the FSA are using it,” Khaled said.

Instances were recorded this year when Iraqi and Lebanese Shia militia entered the Umayyad Mosque in Damascus, hung Shia flags on the wall, and began chants considered by Sunnis to be blasphemous.

Similarly when Hezbollah took over the town of Al Qusair, between Homs and the Lebanese border, a video was released showing Hezbollah fighters hanging a large flag from the minaret of the main Sunni mosque in the city which reads “Oh Hussein.”

Recently an Iraqi Shia militia group occupied a mosque in Tal al-A’is, southern Aleppo, and published pictures on their website.

Abu Salah Al Shami, leader of the FSA’s Saif Al Sham, commented on this practice saying what his fighters witness on the ground: “Often these militia try to occupy and control the religious symbols in the Sunni community to achieve not just a territorial victory but a sectarian one as well.”

These forces have been repeatedly accused of human rights atrocities, many of which are said to have had a sectarian character. Fighting alongside Hezbollah, Khaled said he witnessed crimes committed by these forces, including the rape and execution of civilians in the town of Deir al-Adas after Assad’s forces took over in February 2015.

Rights group the Syrian Network for Human Rights has issued a series of reports on the human rights abuses committed by these militias, including massacres described as ethnic cleansing. In one report they document a series of sectarian massacres between March 2011 and January 2014 that left 962 civilians dead.

While Syrians I spoke to estimate that there are around 30 different foreign fighter groups on the ground in Syria supporting Assad, the bulk of their numbers is made up of fighters from the Iranian Revolutionary Guard Corps (IRGC) and Hezbollah, as Khaled witnessed within Division 9 in the country’s south.

Major General Qasem Suleimani, the leader of the Quds Force, which handles IRGC missions abroad, regularly visits Syria, where he is seen rallying his soldiers and their fellow fighters.

A stream of senior Iranian and Hezbollah commanders have been killed in Syria. The FSA’s Major Abu Osama Al Jolani said his forces hold the bodies of two Iranian commanders killed in fighting in Quneitra, southern Syria.

The coverage of these forces in the mainstream press receives a fraction of the attention Sunni foreign fighters receive, such as those from Jabhat Al Nusra, despite some of these groups, including both Lebanese and Iraqi Hezbollah, appearing on the US foreign terror organisations list.

The US government designated the IRGC and its Quds Force a concern for the proliferation of terrorism in 2007.  The role of these forces within the Syrian conflict has been tracked by Phillip Smyth, a researcher at the University of Maryland, who has issued a detailed report on the Shia jihad in Syria.

There is a major recruitment drive within radical Shia circles to recruit jihadists to fight for the Shrine of Zeinab in Syria, the burial place of the Prophet Mohammad’s granddaughter and daughter of Ali. In a recent interview Smyth outlined that Iran’s aims are not just to secure the geopolitical interests in Syria, protecting the crescent of influence from Lebanon’s Hezbollah, but it has the ideological goal to spread the Iranian Islamic Revolution in the region.

Khaled’s insights shed light on the workings of those forces supporting the Syrian regime’s foothold on power in the country. While many still refer to the “Syrian Arab Army” (SAA), it is clear that most fighters now supporting Assad are not Syrian, many are not Arab and the structure of forces is more of a conglomeration of militia than an army.

While the mainstream media is magnetised to the Hollywood horror productions of ISIS and the activities other Sunni jihadi groups in Syria, Shia jihadists in a range of militia groups have multiplied, and their dangerous sectarian policies and human rights abuses have received little attention. This wave of Shia jihad in Syria not only adds to the chaos and bloodshed in the country, but has major repercussions for sectarian tensions in the wider region for times to come. 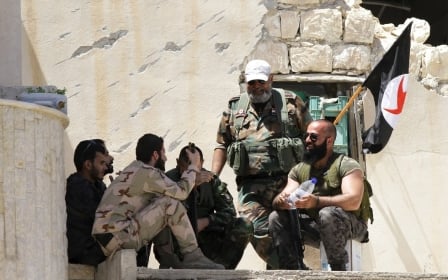